The Path to Maha Kumbh Mela 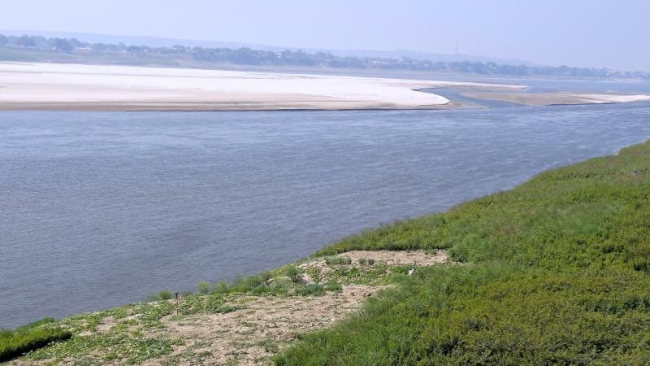 Contrary to popular opinion, the Ganges is very clean in most places; this is not far from the sleeping mountain temple we visited

While Kumbh Mela occurs every three years in four different Indian locations, the Maha Mela is every twelve years near Allahabad, just over 100 kilometers from Varanasi. We hired a driver with the intent of visiting two temples along the way and since the Ganges travels from Varanasi to Allahabad, we used it as our guide along the way.

First, we stopped in one of only four goddess temples in India, Viandhyanchal, in the village of Mirzapur. Intense is too mellow a word to describe this “sleeping mountain” temple. Wafting incense, bells ringing, drums pounding, people shouting and hitting stone walls amidst lots of pushing and shoving to see the representation of the female deity on the inner walls of this temple. Transcending this din, we planted ourselves on the ground amidst blackened marigolds, little kids poking our heads looking for money, and people knocking into us occasionally due to the crowds. And, in this most inauspicious place, I had the most profound experience of my meditation life. 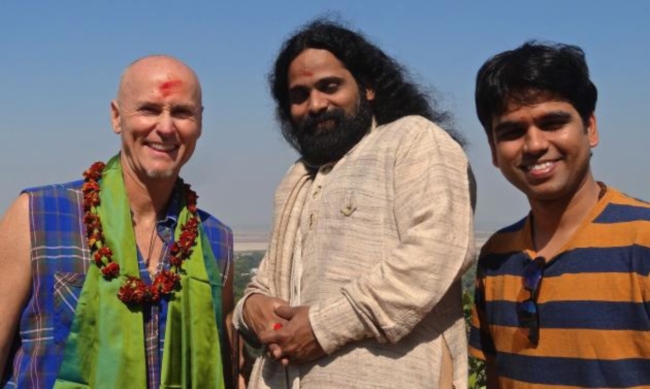 Nitin, Acharya Sri and me just outside the sleeping mountain temple on our way to Kumbh Mela

Within five minutes, my tear ducts erupted and I was crying with a joy that felt divinely sent. A gentle breeze stroked my freshly-bald head (a Varanasi barber seriously nicked the back of my neck with his straight razor) while energy was careening up my spine. While we were inside with no direct sunlight, my face felt sunbaked and, yet, there was this feeling like a wide-winged bird, maybe an eagle, was slowly flapping its wings to shade me from the sun. I later learned that this tiny temple (the square footage of the average American home) was so sacred it’s mentioned in the Indian national anthem. It’s now part of Chip’s anthem as well. 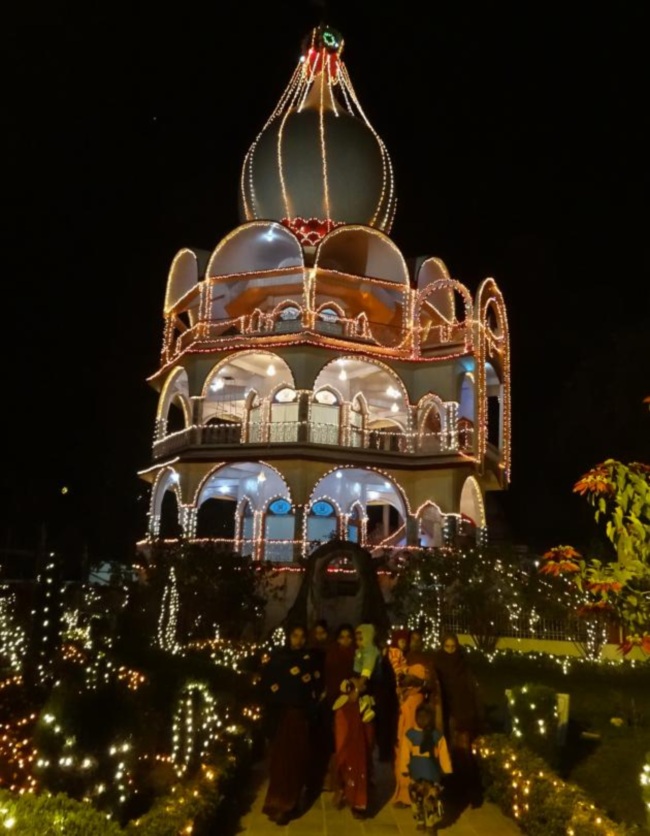 The opulent temple at the Maharishi Sadafaldeo Ashram

After that soul-stirring experience, we went to the smaller Astabhugi Durga temple not far from Viandhyanchal. It’s worth a visit as well, although beware that the actual space to occupy is only four feet tall so you won’t spend much time here. That was fine with me as I was ready to get to Kumbh Mela. The road was filled with festively-decorated, overstuffed buses each dedicated to a different guru. It was quite a scene. 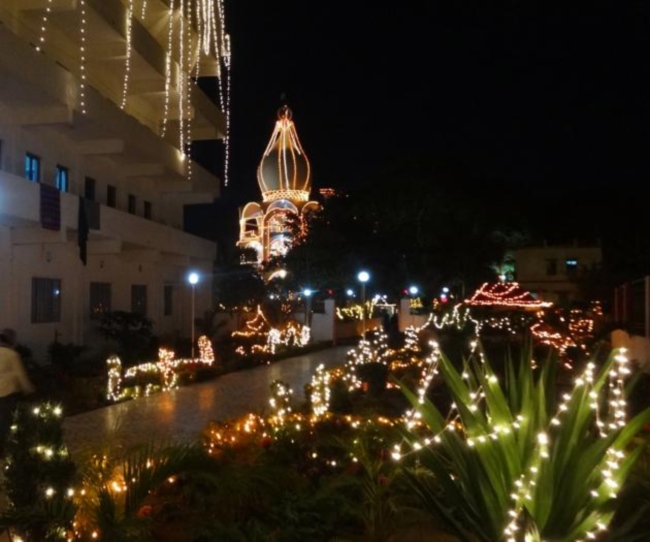 The grounds of the Ashram where we stayed

We were fortunate enough to book rooms at the Maharishi Sadafaldeo Ashram, the closest accommodations to the Mela. As if the world’s largest festival weren’t enough, the Ashram offers daily meditation and yoga classes, an evening spiritual session, and an Ayurvedic spa along with gracious grounds overlooking the Ganges River. The Ashram is also a mecca for locals who follow the guru so it wasn’t just filled with foreigners. www.vihangamyoga.org 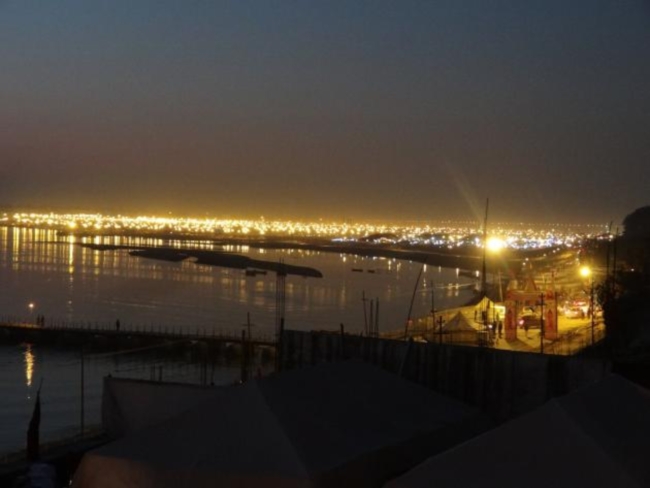 For the Mela, the Ashram erected some upscale tents as well. Just down the road from us was the Kumbh Village, which was also a very popular location within walking distance of the Mela. And the website for the festival also gave direction for other accommodation possibilities. 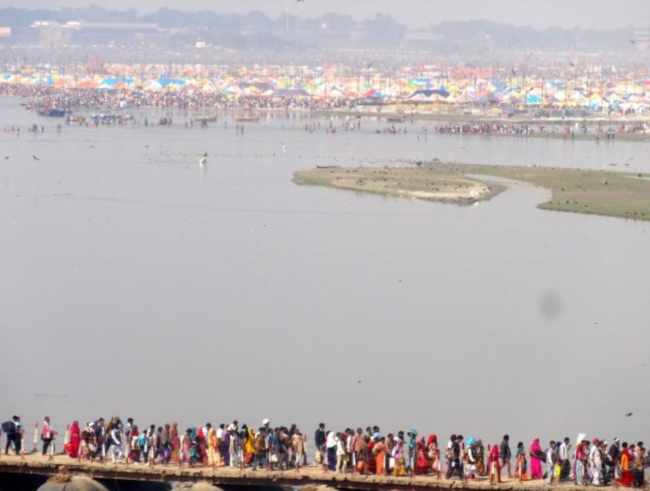 This pontoon bridge, visible from my window, was erected for the Mela and the sacred coming together of the two rivers, the Sangam, can be seen in the distance

We couldn’t have asked for a better location. Not only were we closest to the Mela – stretching for more than 6,000 acres so proximity is important – but we were a short walk to the most auspicious bathing area, the Sangam. And, we were also located near the best sectors of the Mela. Will explain more about that in my next blog post. 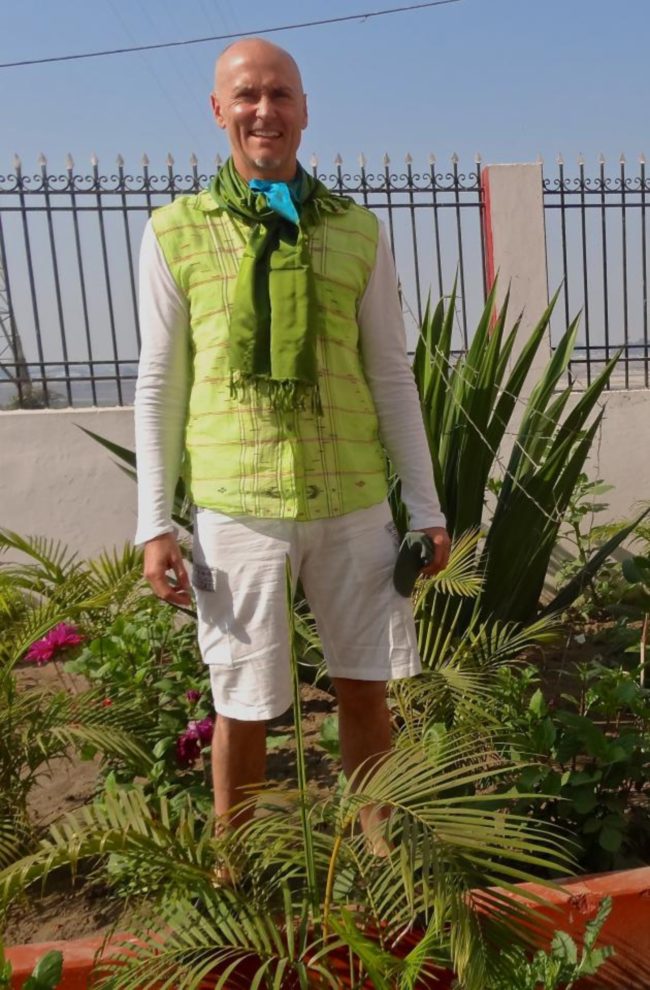 Loving the gardens of the Ashram