The Perils of Festival Stage-Diving, According to AWOLNATION

Florida’s SunFest invades downtown West Palm Beach this week, and AWOLNATION’s Aaron Bruno is looking forward to bringing the group’s high-energy show to its sweaty masses. While festival-goers can expect to hear new cuts from their recently-released sophomore album, Run , the frontman reveals he’s changed his tune when it comes to getting up close and personal with fans.

Bruno tells Fest300 his “stage diving days are semi-retired,” thanks to some overzealous fans looking for a trophy. “I care about my socks a lot, and I would take off my shoes before I would jump in the crowd because I didn’t want to lose my shoes,” he notes. “People started taking off my socks, so I can’t even explain to you how many mismatched socks I have in my drawer right now because of this.”

Aaron admits he’s always taken chances communing with the crowd, referencing his crowd surfing display during the band’s first appearance at Coachella. “I always thought it would be a good idea to take an actual surf board and crowd surf literally on people,” he professes. “After that I saw that I wasn’t the only one who had surfed on top of objects on top of crowds, and so I kind of retired it.”

The singer adds he also quit riding on top of the crowd because “it became a little bit dangerous” for him personally as his music became popular. “I used to have much longer hair, and so people would rip that off at times,” he recalls. “In the beginning it didn’t happen that way. I noticed a big difference when some of the songs ended up [on the] radio, it just changed the way people treated me when I would do stuff like that.” 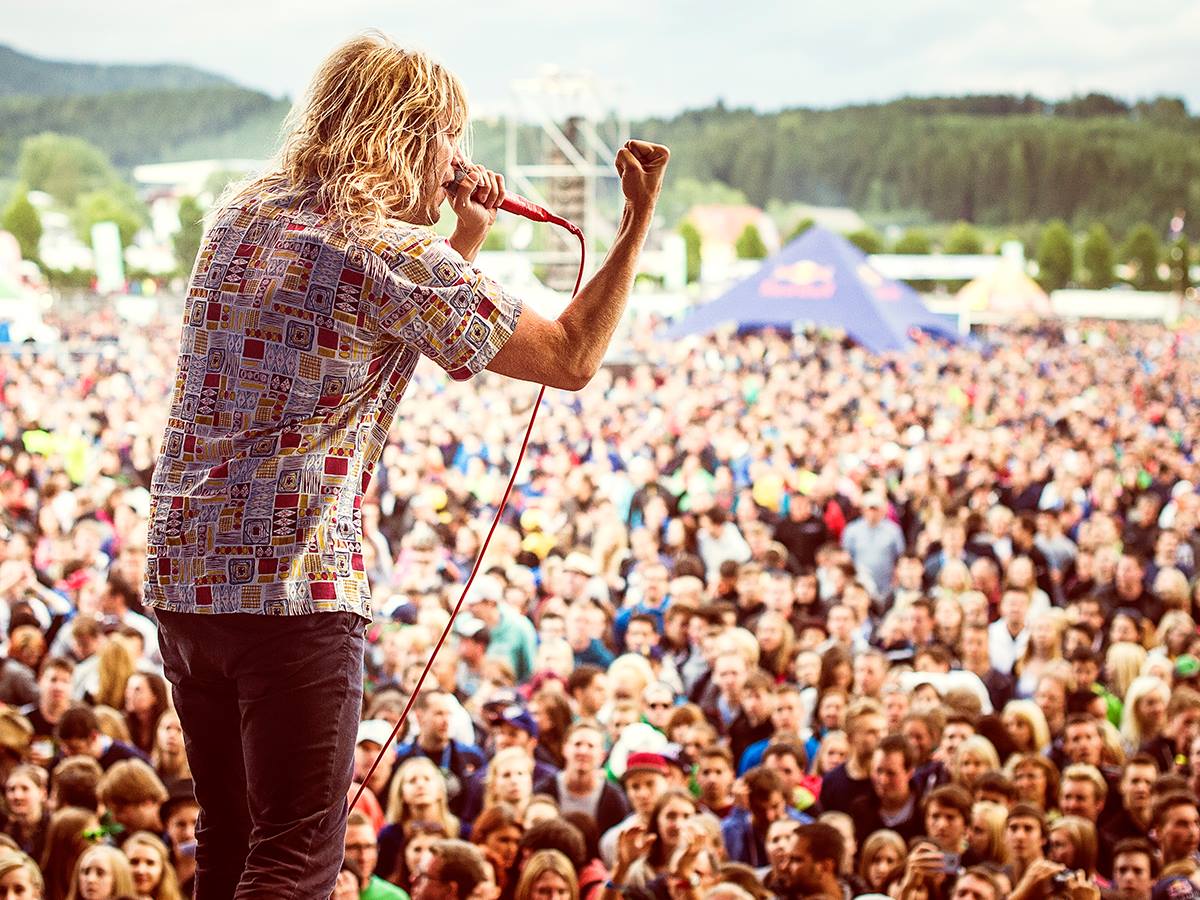 Despite the dangers of losing valuable pieces of clothing and getting groped by fans during performances, Aaron says he blends into the crowd well when he’s not on stage. As a result, he is able to spend time experiencing other groups’ sets during most festivals.

Aaron has amassed a number of great festival memories since AWOLNATION hit the scene in 2011. One of his favorites was meeting Weezer frontman Rivers Cuomo at the Rock the Shores festival in British Columbia, Canada, back in 2013. “That was the first time I realized that Rivers was a fan of the band,” he reminisces. “I always loved Weezer very much. To find out that he wanted to chat, and say really nice things about [my first] record that I would have never expected to hear from him was incredible.” 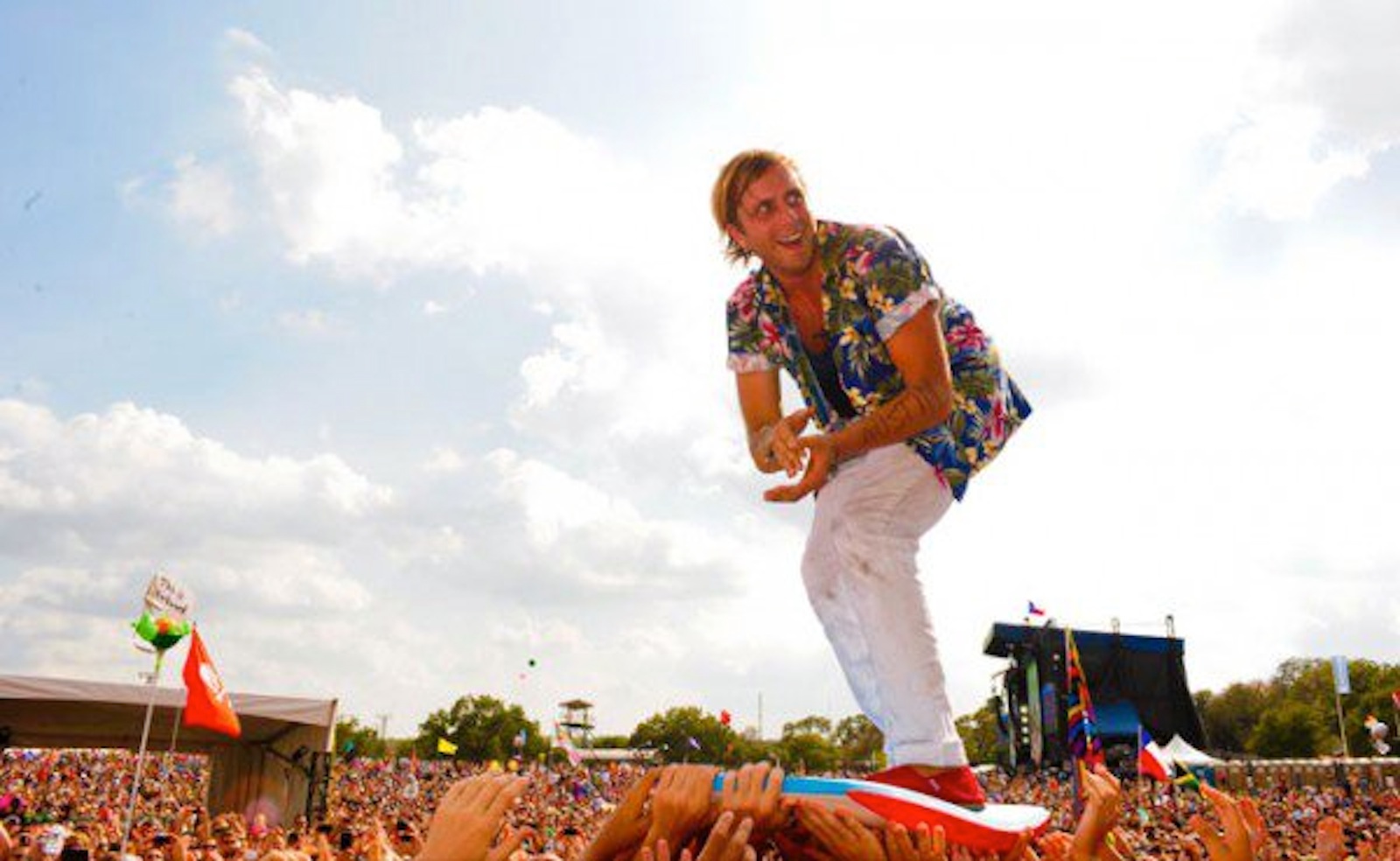 Aaron Bruno crowd-surfing on a surfboard. Courtesy of AWOLNATION

Aaron points out that the chance meeting at the fest has grown into a strong friendship, adding he hopes to collaborate with Cuomo in the future. “Hopefully we’ll work on something together one day,” he asserts. “That’s the best kind of result from meeting anyone else is to actually be able to do something creative.”

Following their appearance at SunFest, AWOLNATION has a full slate of festival appearances in the U.S. this summer, including BottleRock, Firefly and Bonnaroo, about which Aaron is most excited. The singer notes he’s been fortunate to play alongside a massive amount of great bands over the past few years, but this year’s Bonnaroo lineup is one that he’s especially proud to be a part of. “To see my name anywhere near Robert Plant is pretty cool,” he declares. “Then on another flyer my name is near Sir Paul McCartney, so to be near any Beatles or [Led] Zeppelin situation is absolutely wild and seems like a dream. I still get giddy about these kinds of situations.”

You can catch AWOLNATION at SunFest this Sunday night when they hit the FPL Stage at 7:15 pm. To see the rest of band’s tour schedule, visit AwolnationMusic.com.