The Whirling Dervishes in Fes: Imagine My Surprise

I’ve scheduled myself to go to 40 festivals in 24 countries in a one-year period from the end of 2012 to nearly the end of 2013. It’s a tough job, but someone’s gotta do it! I’m almost halfway through this journey that started with the Mevlana Whirling Dervish festival in Konya, Turkey in mid-December last year. I’ve long been fascinated with Sufism and that particular annual festival (the 739th to commemorate the poet Rumi who was the first Whirling Dervish). I have to say it was one of the ten best festivals I’ve ever attended.

Given that this particular two and a half week spring festival sojourn included Cheese Rolling in England, baby jumping (El Colacho) in Spain, speeches in London and Beirut, and consulting in Dublin, I didn’t look closely at the World Sacred Music Festival program. I just knew the second night was a musical journey between Greece and Turkey called “The Golden Gate” which spoke to my San Francisco roots.

But, all of a sudden, the unmistakable costumes of some dervishes showed up on stage. And, I realized the Mevlana dervish order of spin doctors was about to start cooking up their magic on stage: 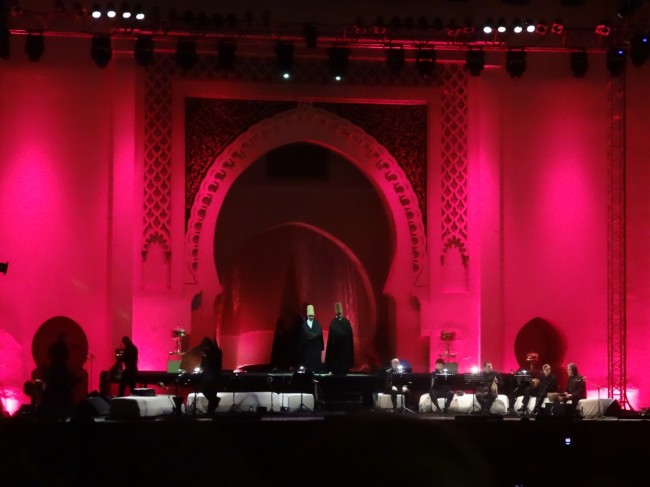 If this ethereal form of ecstatic dancing intrigues you, I’d highly recommend you review some of my blog posts from the Whirling Dervish festival last December.

Who Goes To A Whirling Dervish Festival?

The Emotions You’ll Feel While Watching the Dervishes

You Spin Me Round…

My Favorite Travel Agent in Turkey

Going Deep With The Dervishes 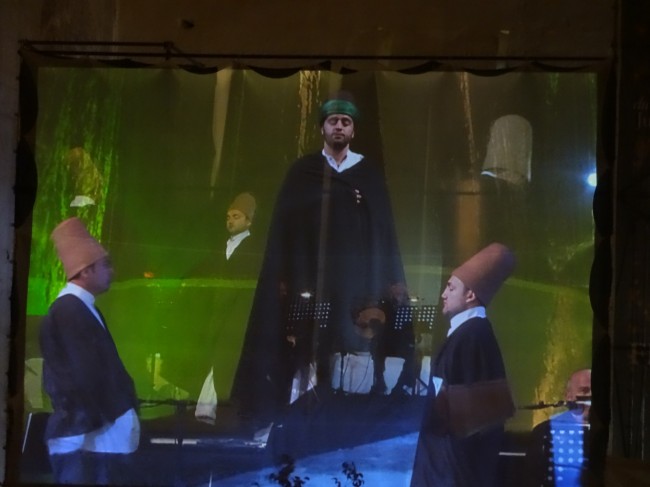 I was fortunate enough in Turkey to be given a lesson in whirling. It ain’t easy, guys! You get dizzy within a couple minutes and you feel like you want to hurl, not whirl, after about five minutes. That’s one of the things that is so amazing about these dervishes and their ability to continuously spin for about an hour.

This venue of Bab al Makina was particularly ripe for this art form as the whirling shadows could be seen on the back wall. This performance was definitely the highlight of the night. 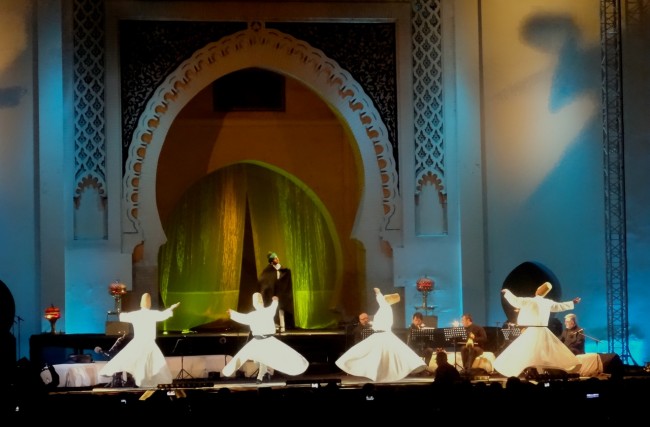 After the concert, I rushed back to my riad, as it was already nearly 11:30 pm and I had a 3:30 am wake-up call the next morning for an early flight. Along the way, I enjoyed the exuberant spirit in Plaza Bab Boujloud, next to Bab al Makina, which was full of locals enjoying a large open-air concert. Then, I came upon the Sufi Nights celebration at the open air palace, Dar Tazi, where I met a couple of American brothers who were lying on the ground ready to enjoy a Sufi band:

Suffice it to say, Fes is abuzz with musical talent during this festival.

Red-eyed the next morning, I pondered the festival as a taxi rushed me to the airport. In barely more than 24 hours, I’d experienced three different formal performances and a half-dozen free concerts around Fes. The next time I come I will make sure I take afternoon naps since it’s clear that some of the best musical magic of the day happens after midnight. As I stood in the security line at the nearly-deserted Fes airport, I marveled at the regal, cape-attired gentleman next to me. 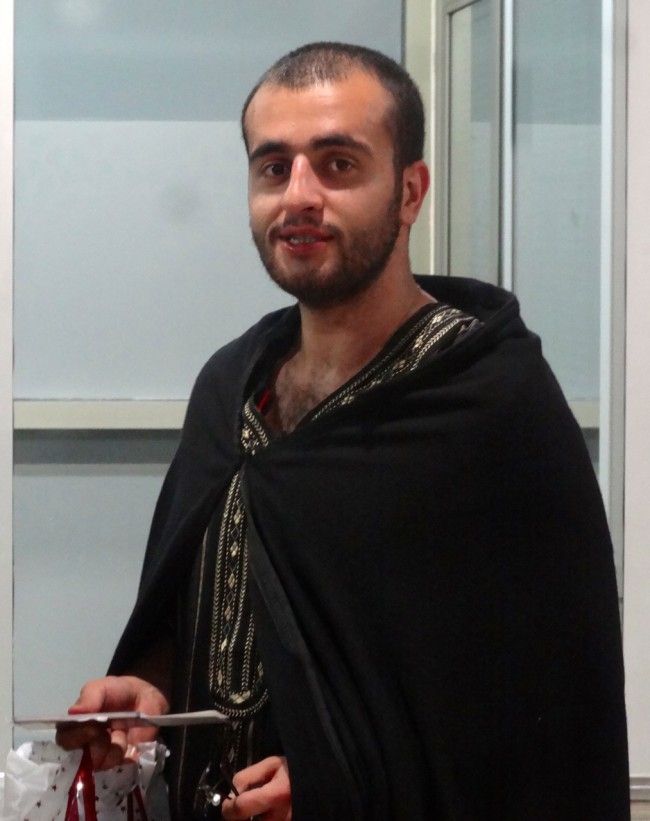 Well, yes, this is a sacred festival as the lead dervish from last night’s show (that ended barely five hours ago) is standing next to me. And, surrounding him is the rest of his Sufi brethren as well as the Greek and Turkish musicians I’d seen just hours ago. I pinched myself. No, I wasn’t dreaming. As we waited for our flight, I had a peaceful conversation with this glowing man about our favorite poet in the world, Rumi. 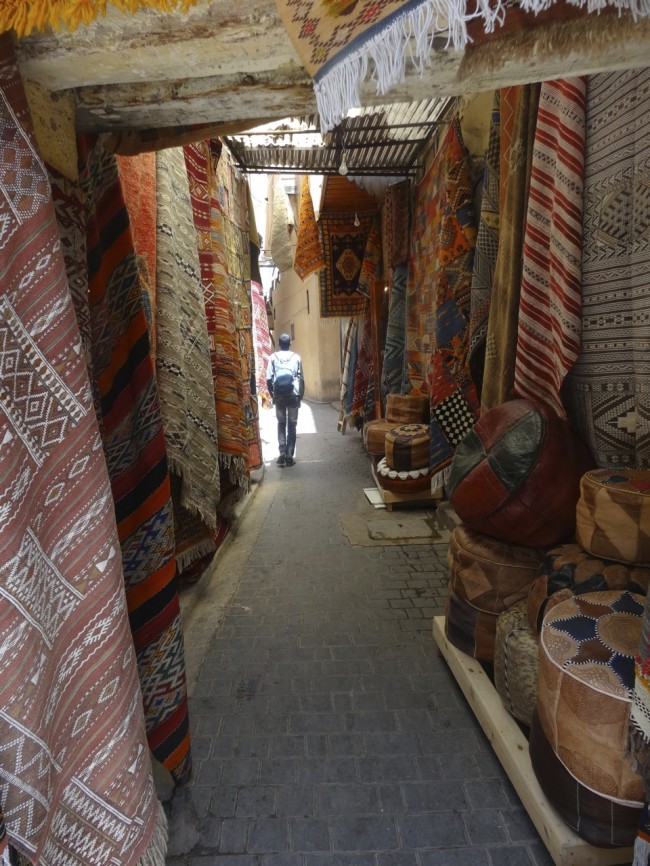 Fes is exotic, sensual, mysterious, and soulful. It’s a place to amble and appreciate all the textures of life, whether it’s in fabrics, in people, in food, or in architecture. And during the World Sacred Music festival, the textures are the cultural collaborations: one-of-a-kind, specially-commissioned labors of love from people who have nothing in common on paper and everything in common in their hearts. Find a way to make the journey to this festival and, while you’re at it, venture to Marrakech, one of the most fascinating mixtures of medieval and modern design you’ll ever see in your life.