This Guy Who Bikes to Festivals Inspires Us to Go Green

We’ve all heard about the transformative power of festivals, but rarely do you hear about the journey there as the thing that’s life-changing. Sitting in stagnant traffic and overstuffed cars can feel like some sort of hazing ritual geared to weed out the weak and provide a dramatic counterpoint to what happens inside the gates. In other words, entry and exodus can be a serious buzzkill.

Not for Stephen Chun, though. You could call him the Festival Biker: Since graduating from college in 2013 he’s done one extensive bike tour per year with a festival at its center. In 2014, he went from San Francisco to Lightning in a Bottle to L.A. (~442 miles, 3 weeks, 8 days at LiB); in 2015, from Vancouver to Northern Nights back to SF (~1010 miles, 5 weeks, 7 days at Northern Nights); and in 2016, he rode from SF to Burning Man (~310 miles, 7 days). When he gets to the event, he usually works or volunteers on green teams to help deal with the significant waste generated by most gatherings. 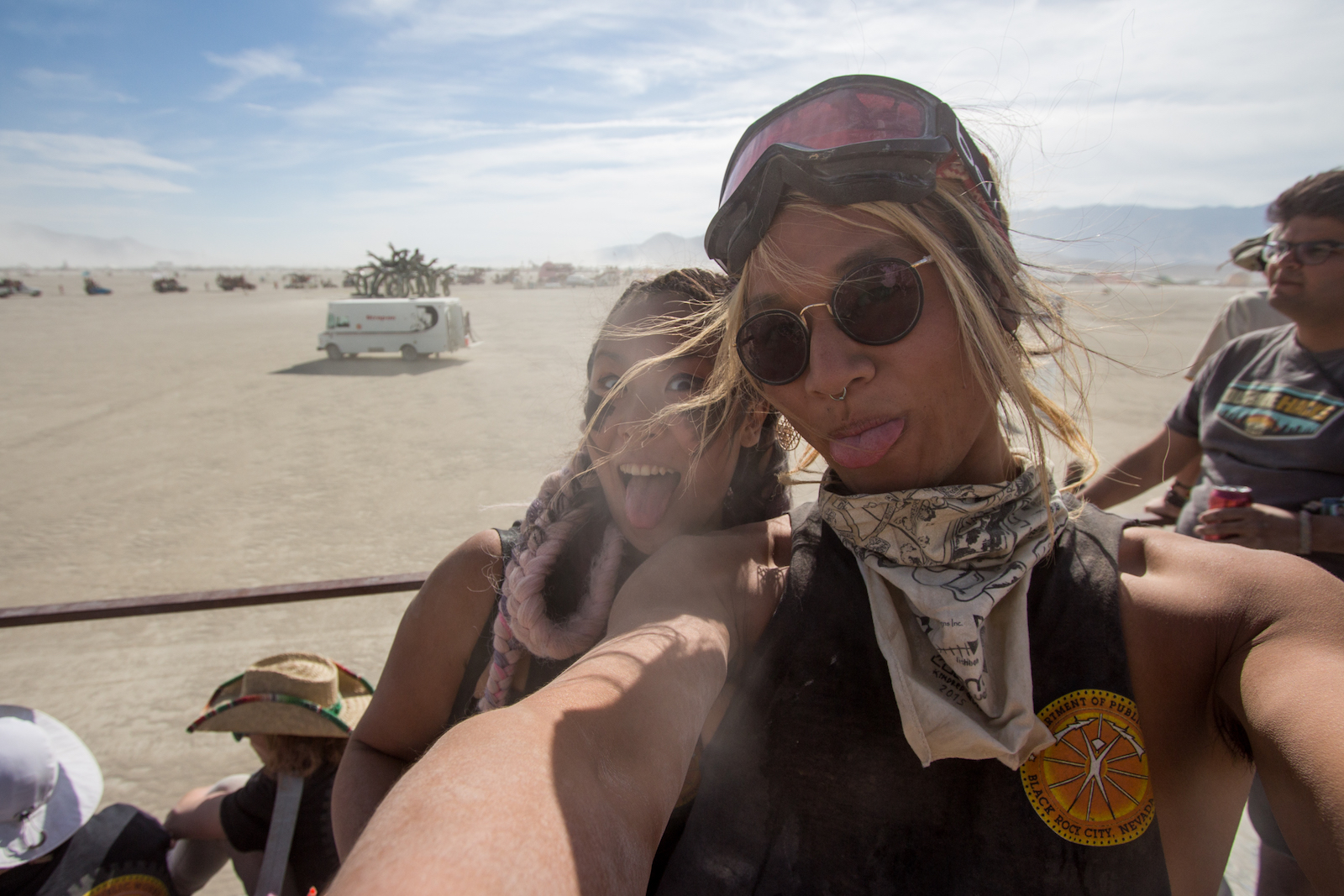 Chun and a friend at Burning Man. Photo by: Stephen Chun

“Like so many others in the community, festivals have had an enormous impact in my life. It was as if I found a way to become the best I could be and soon every aspect of my life was invigorated with inspiration,” Chun says. “Biking to festivals became a way to inspire folks; if I can go from being a chubby Korean PC gamer kid to biking across California, then, well, so can you.” 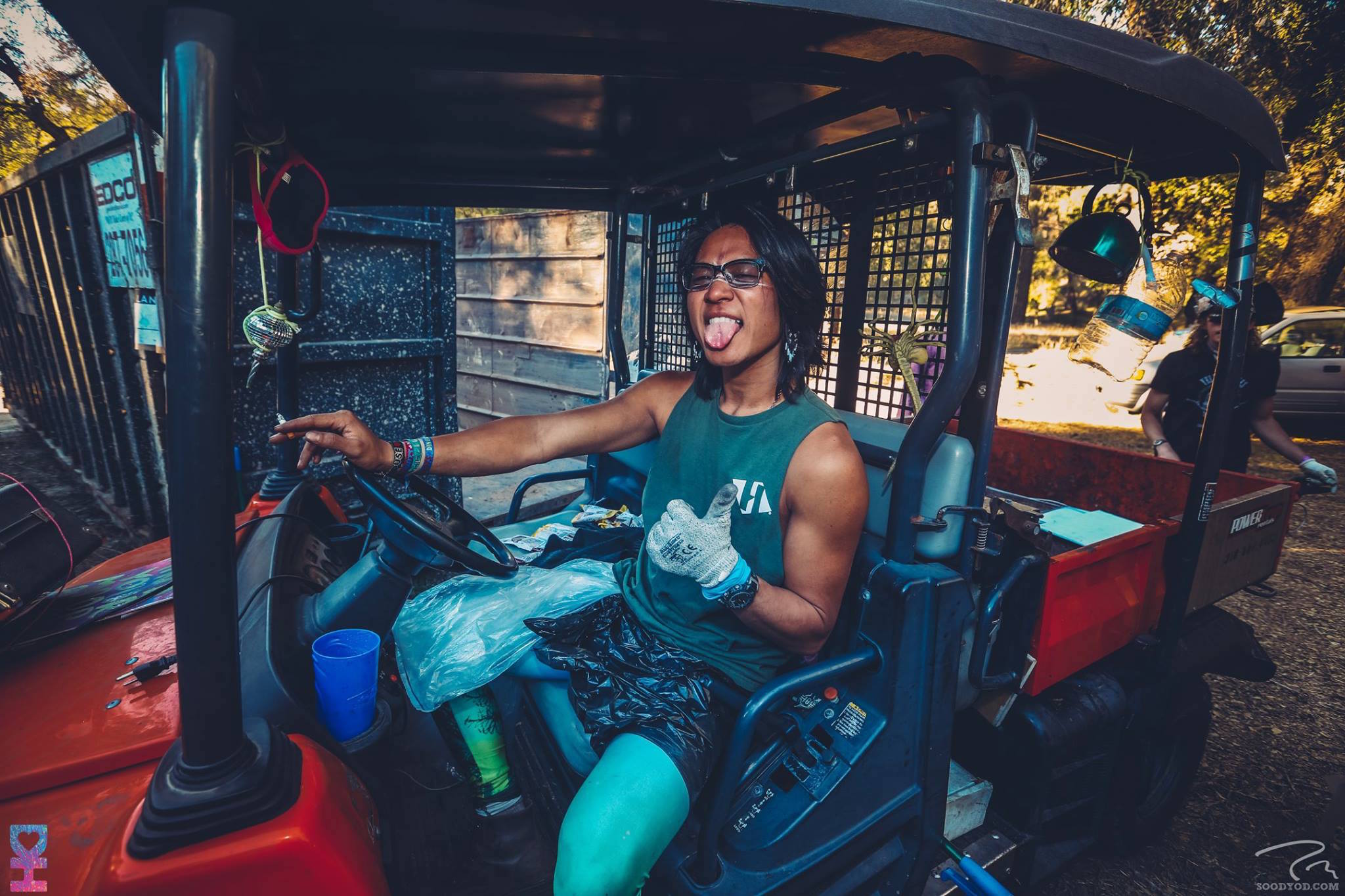 Biking gets Chun to events in an inexpensive way that also allows him to “explore the planet and draw out all its fine details.” He manages to do this with a backpacking tent on top of two 15-pound rear panniers that hold minimal clothes and shoes, some camera and bike repair gear, toiletries, and a microfiber towel. For food, he subsists on tortillas, bananas and peanut butter (with the occasional meal out at yummy holes-in-the-wall), and has incorporated nuts, seeds and Soylent into his recent tours. 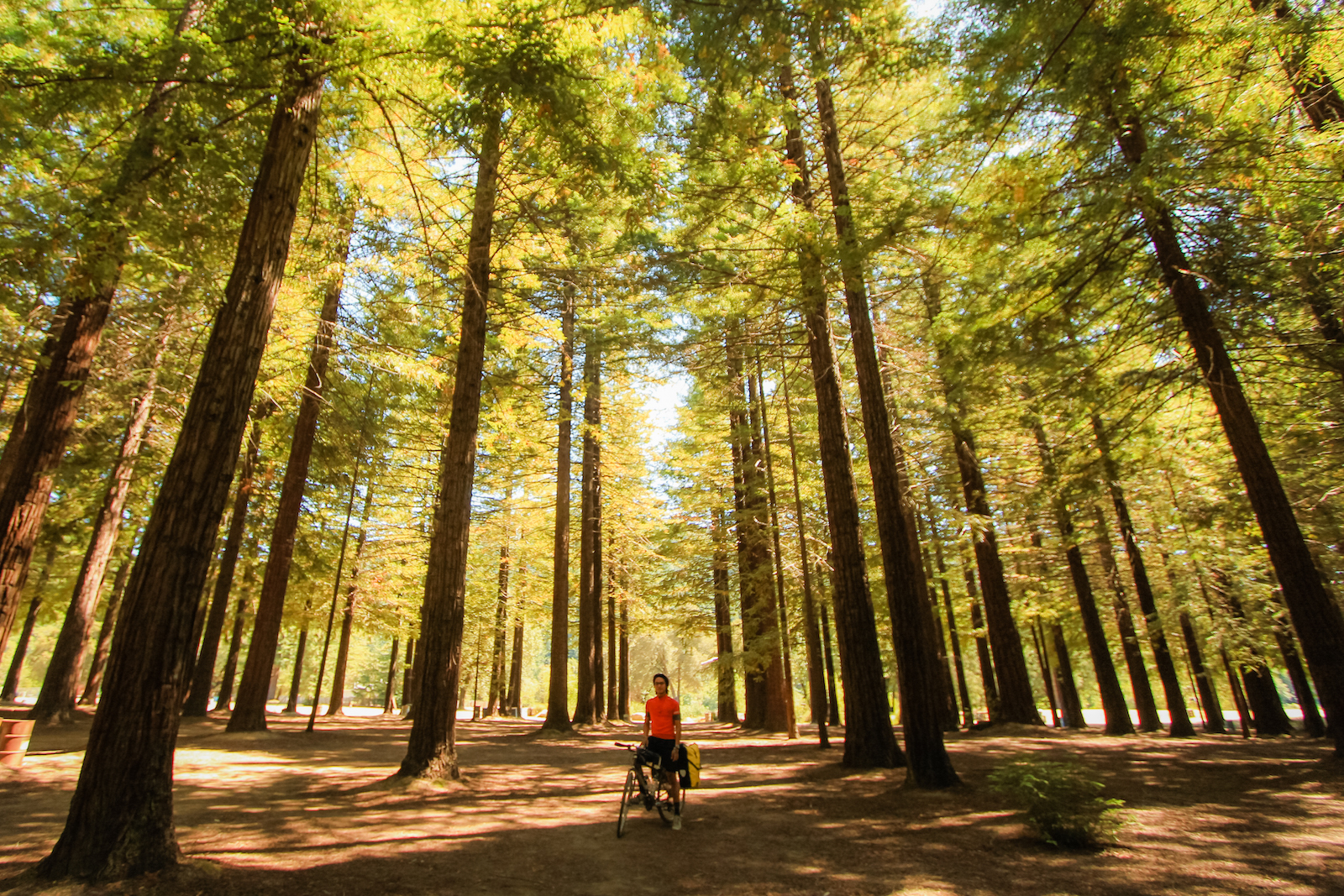 Chun on a detour through the Redwoods. Photo by: Stephen Chun

As for where he sleeps, Chun keeps an open mind. Though campgrounds with amenities are his first choice, he’ll also use sites like couchsurfing.com and warmshowers.org, and over time his network of festival friends has meant more friendly places to rest his head. Seeing where he lands is part of the thrill Chun gets from trips like this: “It creates a feeling of liberation that is immensely profound and perspective-shifting because we are so used to the idea that home is where our bedroom and belongings are. While touring, the earth is my home."

Chun’s energy intensifies as he gets closer to the festival. “The honks, cheers and many thumbs up get me pumped and excited—‘I’m almost there!’” he thinks to himself. Pulling up to the gate on his two wheels “is one of the best feelings,” he adds. “My attitude towards the world blossoms when I feel proud and accomplished from the inside, and loved and appreciated on the outside. That’s the mentality I want entering a festival." 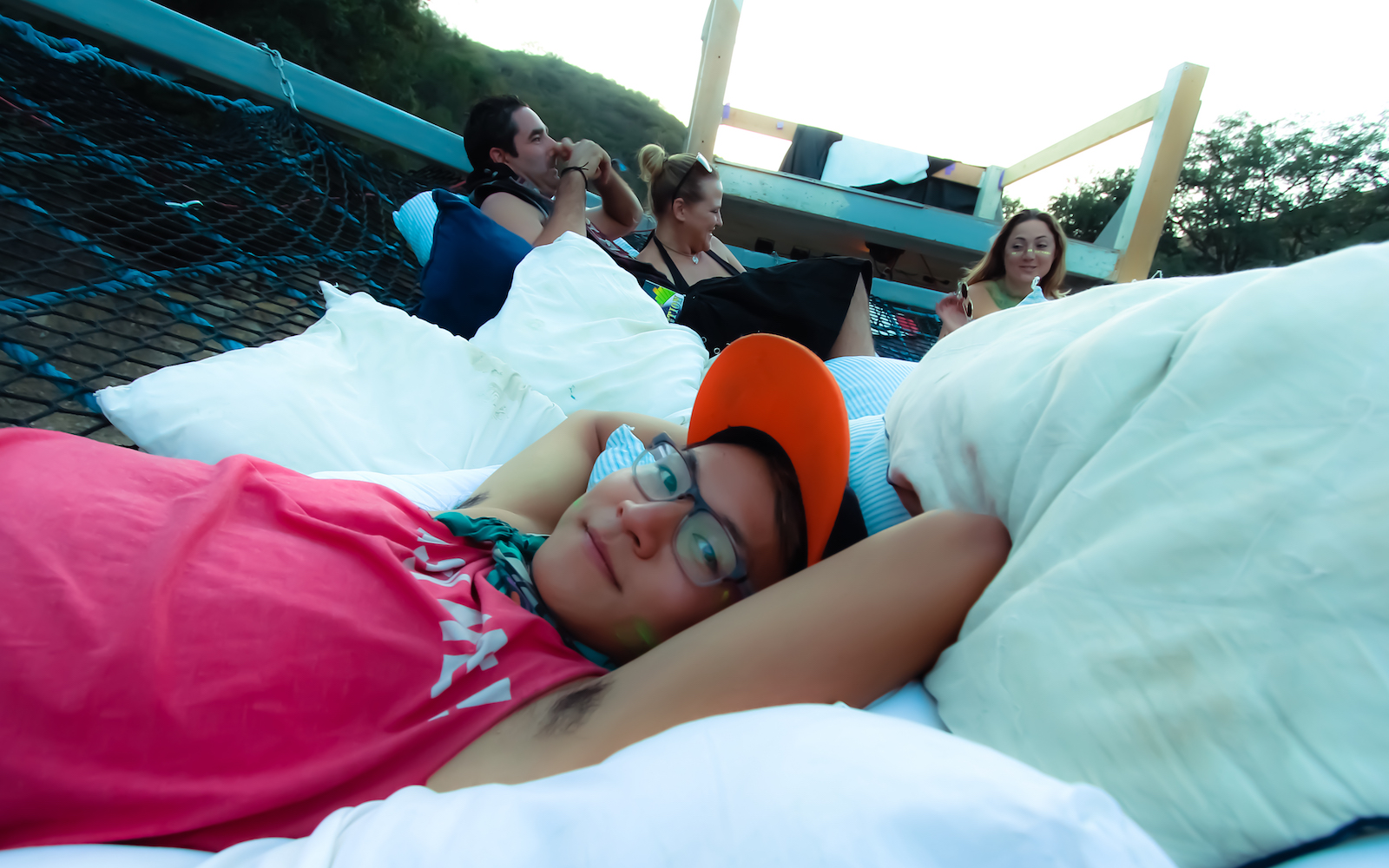 Wow, how many of us would like to say that? Chun is quite literally the embodiment of the journey being the destination. Biking puts him in a state of flow that challenges him physically and places him firmly in The Now.

“It feels automatic but the constant flow of activity creates an immense shift in focus,” he explains. “Suddenly you find yourself in this moment and you ease into an introspective journey: reflecting, planning, meditating, and decompressing for hours a day. For those of us that live in cities and suburbs, being in nature has a subtle yet powerful effect on our minds. Without the nuisances of society, the world becomes the world again...and it’s beautiful!” 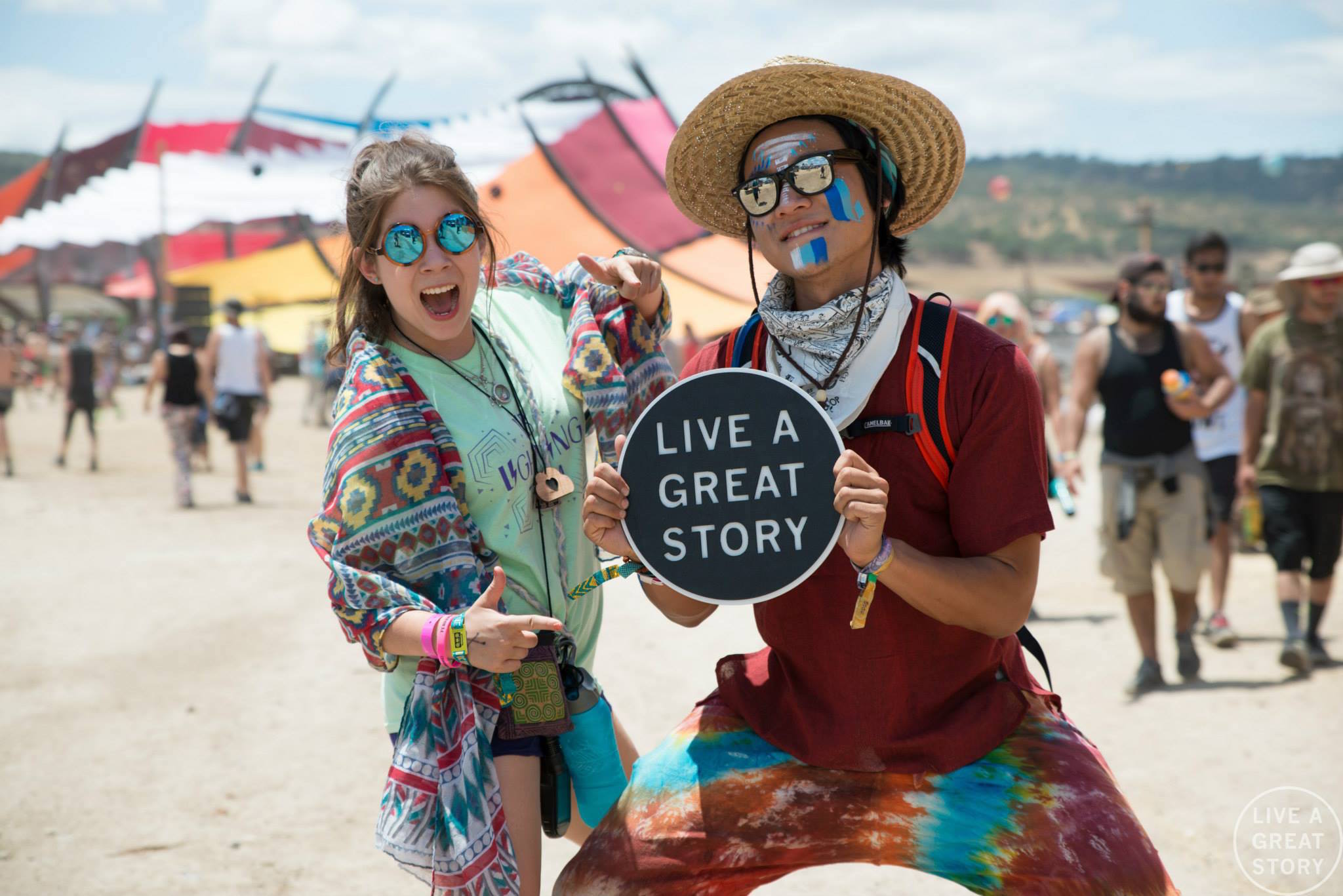 Chun and a friend at Lightning In a Bottle. Photo by: Live A Great Story

"Biking is all about progression—of ups and downs, of challenges and accomplishments,” he continues. “It's taught me to look at life in a similar way. Challenges create growth—in cardiovascular endurance and muscular strength, all the way to mental will and self confidence—allowing me to reach new limits in so many ways, even in developing self love.”

Um, can we come along?

This article was originally published in January 2017.