Our festival traditions live on, not just because they’re almost a cultural rite of passage for a city or society, but they’re also an opportunity to connect and experience collective joy with our fellow humans. 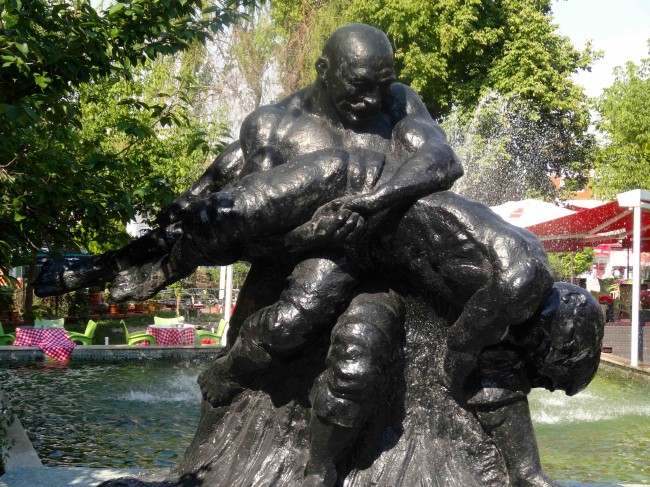 But, it’s slightly discomforting how outsiders can misconstrue these traditions. This has happened twice to me in Turkey in the past seven months. I went to the 739th annual Mevlana Whirling Dervish festival in Konya, Turkey in December (less charming city, less hospitable weather than Edirne where the Oil Wrestling occurs). I thought I’d be surrounded by Rumi-obsessed Americans who read New Age Journal magazine. Quite the opposite. It was mostly older, devout Turkish women in head scarves. Same presumption here in Edirne based upon what I saw in this video: 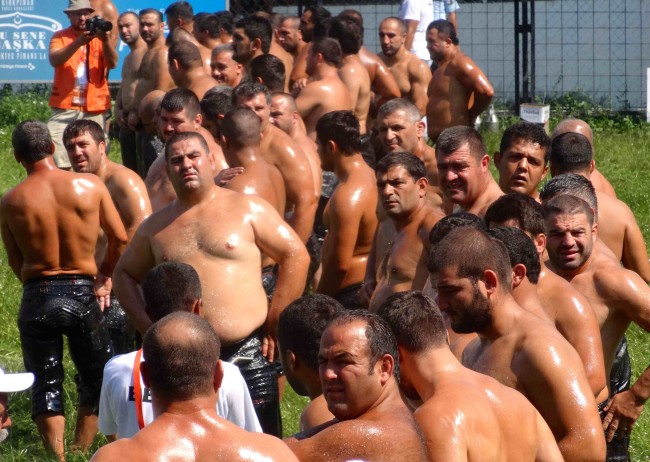 Oil wrestling doesn’t attract foreign sex tourists or voyeurs as some might think. Oil wrestling is one of the favorite sports in Turkey and it’s an opportunity for male mates to reconnect, whether they’re on the field or in the stands. The stands are filled almost solely with Turks (the only other American may have been the U.S. Ambassador to Turkey who was in the VIP section). So, maybe it’s time I readjust my festival prejudgments, especially in Turkey, where I’ll be going to the Camel Wrestling festival one of these days. 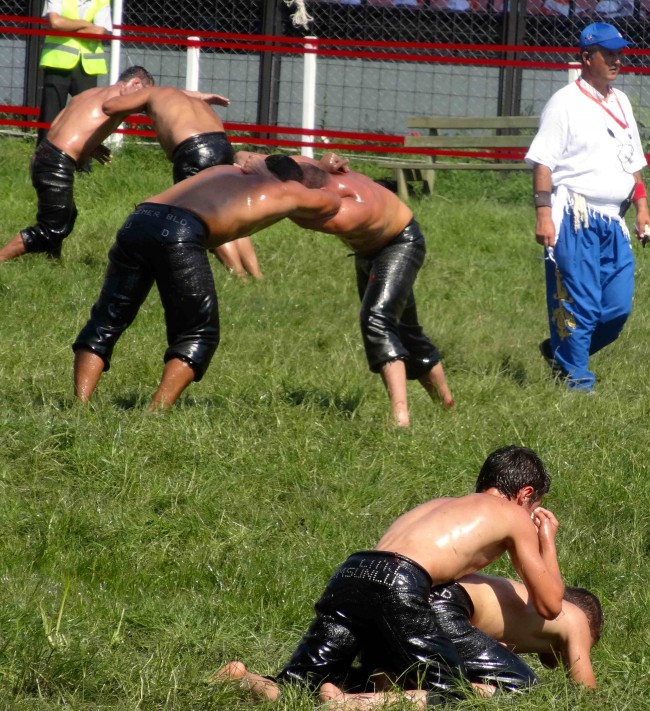 There are favorite athletes of the tournament like Ali Gurbuz who has won the last two years in a row in the “head” category (the highest honor) and has taken home the golden belt. There’s a tradition if you win three years in a row that you get to keep the 14-karot belt. Based upon Saturday’s three matches, it looks likely that Ali will win the belt for life. 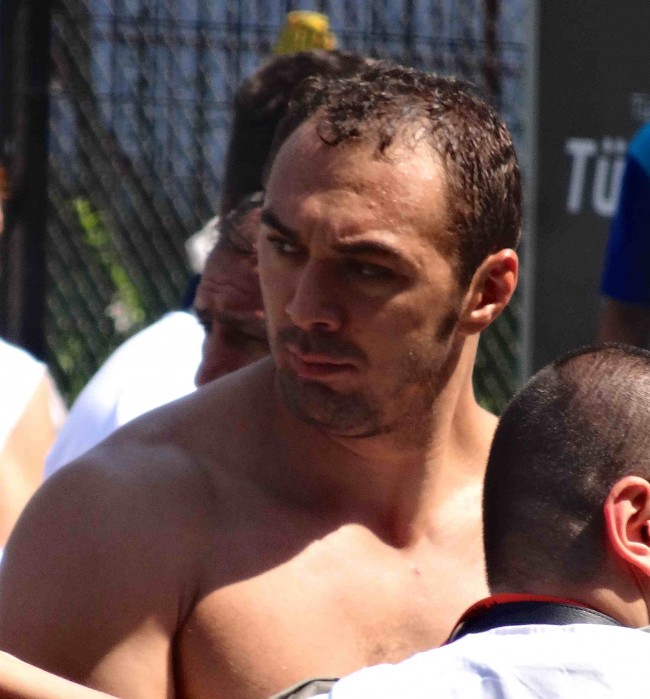 Ali Gurbuz, the favorite to become “Champion of Turkey” 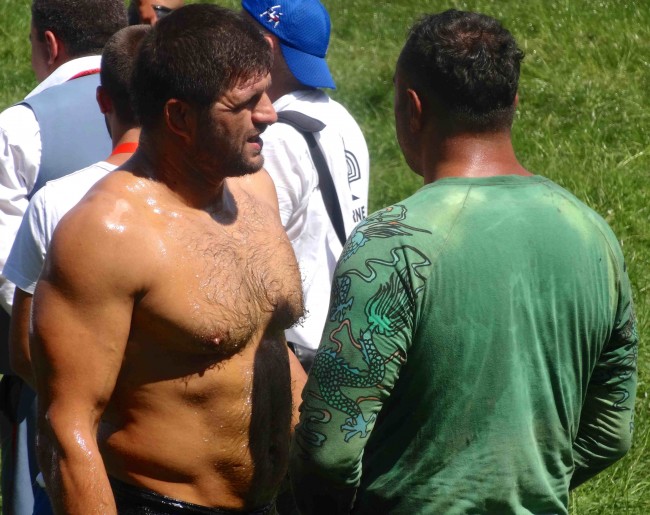 I went to the festival with Suleyman who helped guide me to what was happening on the field. When we grabbed lunch, he saw an older man he didn’t know and invited him to join us and paid for his lunch. Halil had wrestled at the championships until he was 27 years old and had a left ear to show for it (wrestling ears can look a little disconfigured and bloated). It was sweet hearing stories of how this festival means so much to the Halil and fellow Turks. 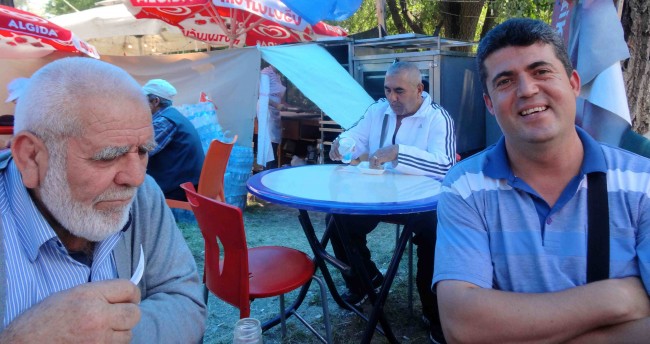 It’s an opportunity for friends to connect…. 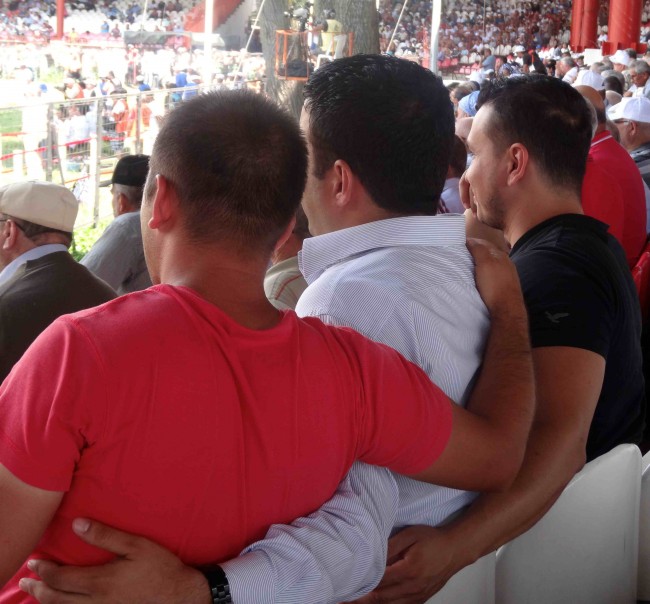 ….and even smoke the hookah… 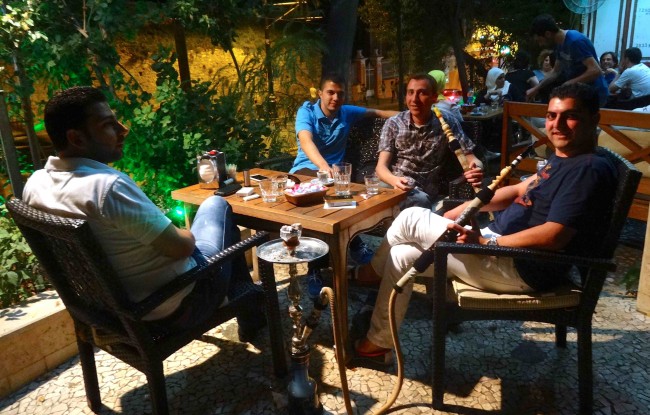 This experience has helped me underscore that being “culturally curious” also means being “culturally respectful,” as in not making so many presumptions based upon a few photos. As we did the lovely, three-hour drive back to Istanbul where there was a vibrant carpet of tall sunflowers for miles, I felt so fortunate to be a curious observer of such a cultural tradition. 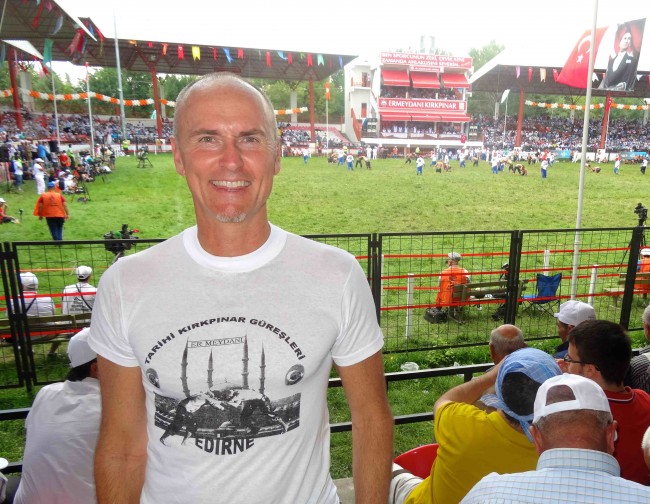 When I got to Istanbul, I immediately headed to the more than 450 year-old Ayafofya haman to get worked over. And, now, it’s time to go from Istanbul to the Running of the Bulls, another tradition with all kinds of masculine mythology surrounding it.