Why the Pingxi Sky lantern Festival is Worth the Trip 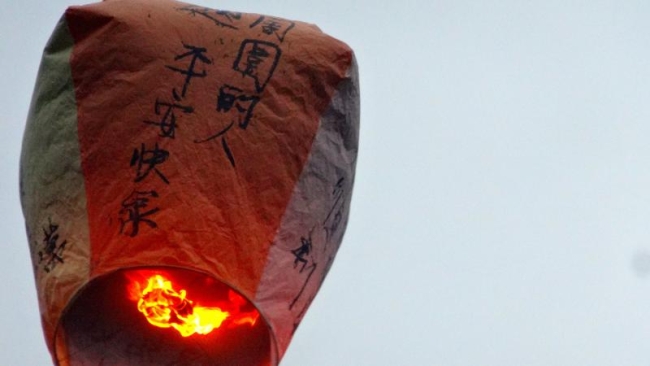 Lantern festivals represent the celebratory end of the Chinese New Year and have been a part of the culture for more than two thousand years. With a blaze of luminous glory that lasts from the twelfth through the fifteenth day of the New Year, colorful lanterns made from sheepskin, bamboo filaments, rice paper, and silk or satin brighten up Chinese towns across the land. This is also known as Chinese Valentine’s Day as it’s a particularly propitious time to meet a mate. 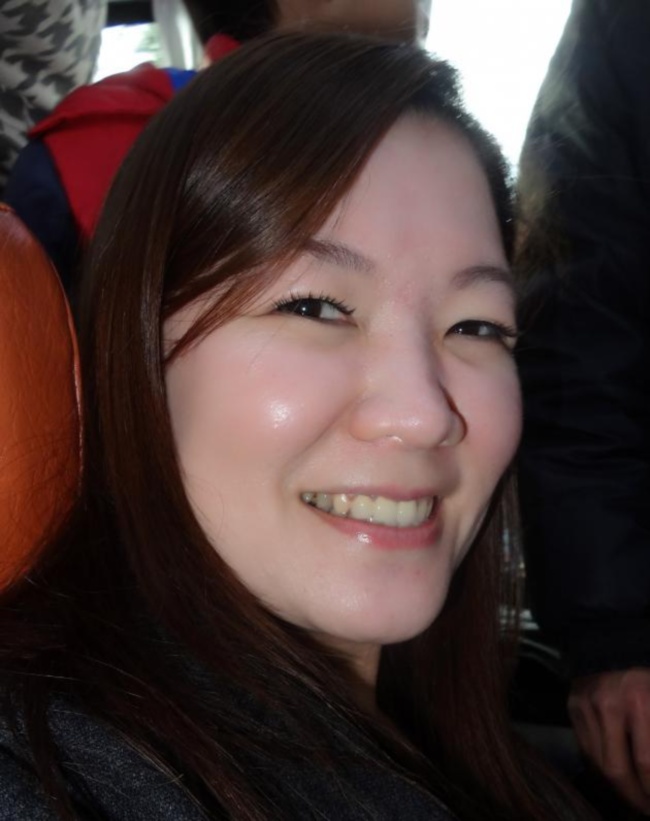 Tracy, my seatmate, on the bus to Pingxi

I chose the Pingxi Sky Lantern Festival because it offered such a unique combination of storyline, setting, and visuals. Pingxi is an hour’s drive from Taipei nestled in the verdant mountains. According to the elders of Pingxi, the tradition of setting off heavenly lanterns began during the Ching Dynasty. At that time, bands of outlaws frequently raided villages around Pingxi, forcing local residents to seek refuge in the mountains. The heavenly lanterns were signals used by the village watchmen to inform the refugees that their houses were safe again. When those hiding in the mountains saw the lanterns in the sky, they knew it was time to go home. 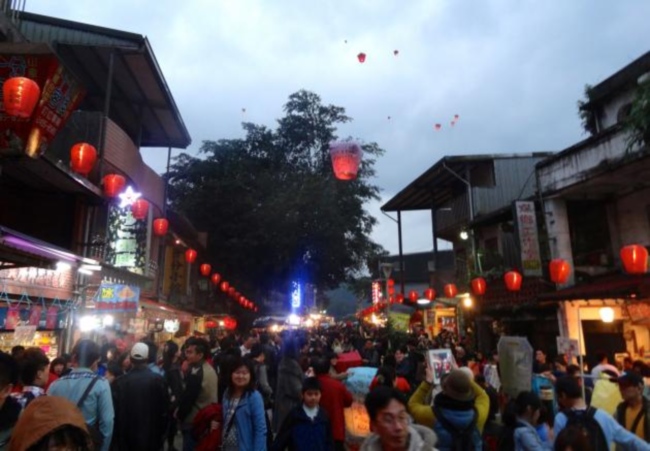 To get to Pingxi by means of the narrow mountain roads, you take shuttle buses that leave from in front of the Taipei Zoo. I was surprised to find mostly young people going to the festival as it turns out to be particularly popular with the youth as the intent of the festival is to ask for blessings so that your future hopes and dreams can come true. I shared a seat with Tracy (pictured above) and quickly learned that this sweet cosmetologist’s dream was to find a foreign boyfriend. We had an enjoyable conversation as I marveled at the terraced fields, bamboo groves, and lush river valleys. This drive was worth it even if it didn’t end at the Sky Lantern Festival. 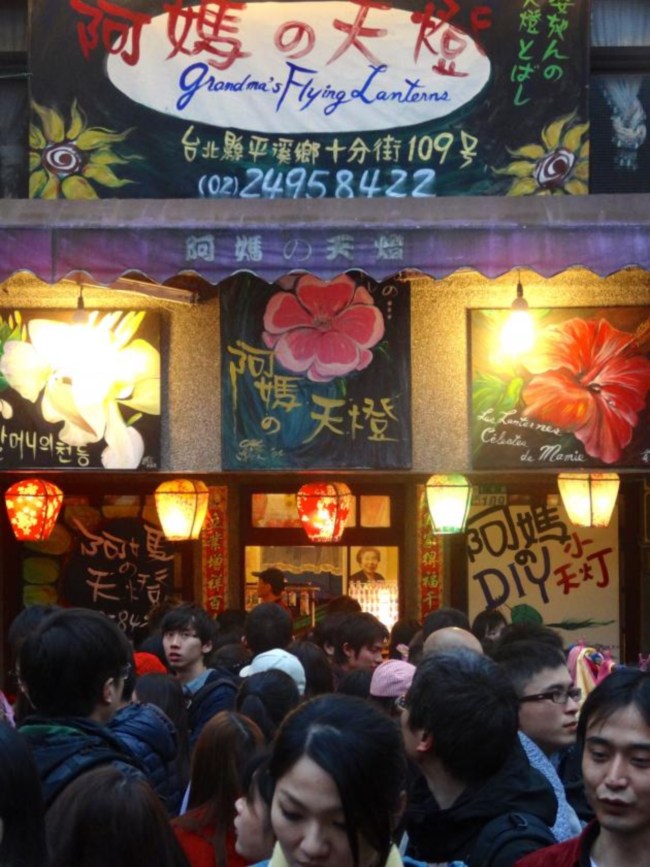 Upon arriving in Pingxi, you have a choice. You can either walk up to the Old Street or you can walk to the main stage (which I’ll talk about in my next post). I’m glad I gravitated to Old Street as with nearly 80,000 people in a village built for a few thousand folks, it was nice to see the main commercial thoroughfare before it got too crowded. Recommendation: take the $2 round trip bus early enough in the day, as it starts at 10 am, to get a vibe for this little town. 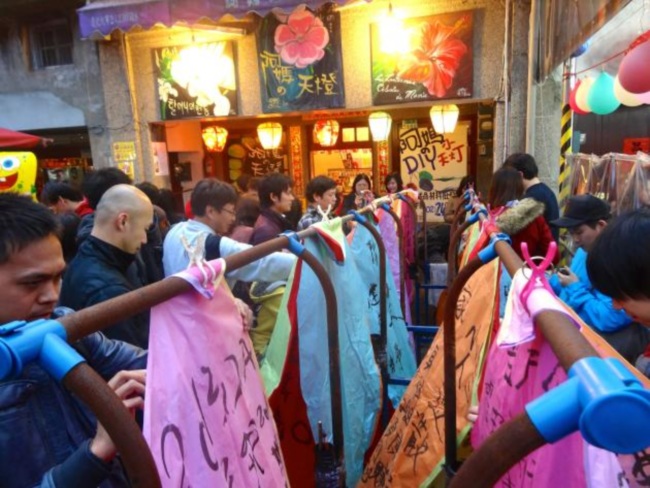 The main activity is to buy a lantern and – as you can see from the photos, they’re not small – write your aspirations on the lantern before letting it go in the air. The lanterns are constructed from oiled rice paper with a large candle at the bottom. As the lantern heats up, it becomes airborne and stays in the sky as long as the flame is alight. All of this happens on the train tracks, but that creates a certain amount of risk. Check out this video of what happens as the trains come through the village just as people are launching their lanterns (the trains come through every 15 minutes). 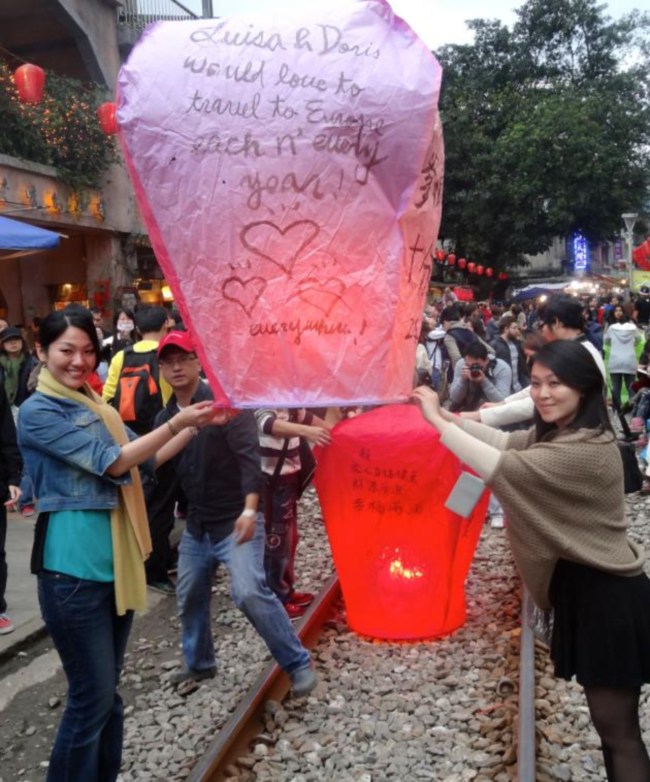 Since Tracy and I went in opposite directions (I think I squished her Chinese Valentine’s Day dreams), I was observing most of this on my own until I ran into a friend of a friend. I have to say this would be a great event to come to with friends because the point of it is to express your aspirations for the next year and beyond. There’s a certain amount of intimacy and dreaming that comes with the experience, plus it’s a more international crowd than you might expect. 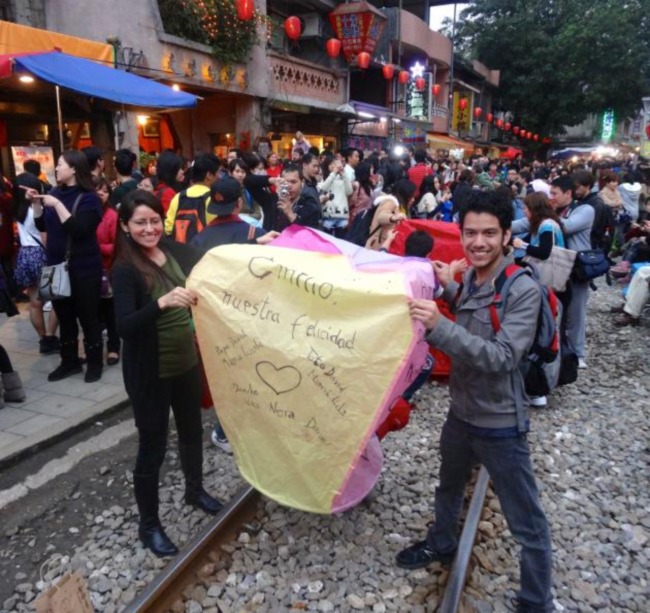 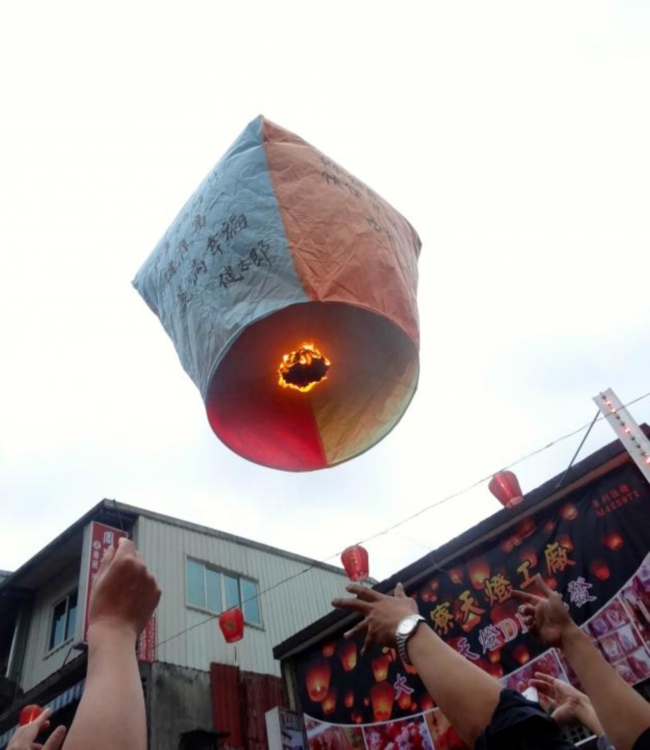 What’s particularly enjoyable, as noted in the next 30-second video, is that you have constant spectacle. Just as you’ve given attention to someone launching a lantern right in front of you, there’s another one about to go airborne in ten seconds just behind you. 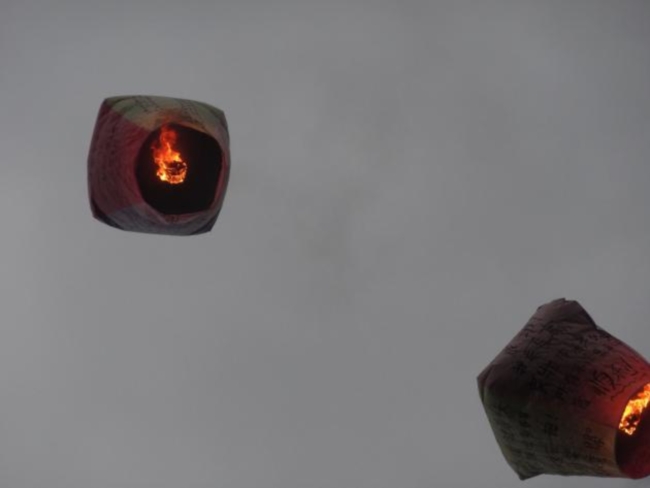 For some reason, this shot reminded me of the sky in the Wizard of Oz with balloons and homes flying everywhere in the sky

Visually, this has got to be one of the top festival events in the world. But, you haven’t seen anything yet. Wait till you see what happens on the main stage. But, before you go to the next post, watch the video at the end of this post to get a fuller flavor of what it feels like being in such a joyous and captivating atmosphere. 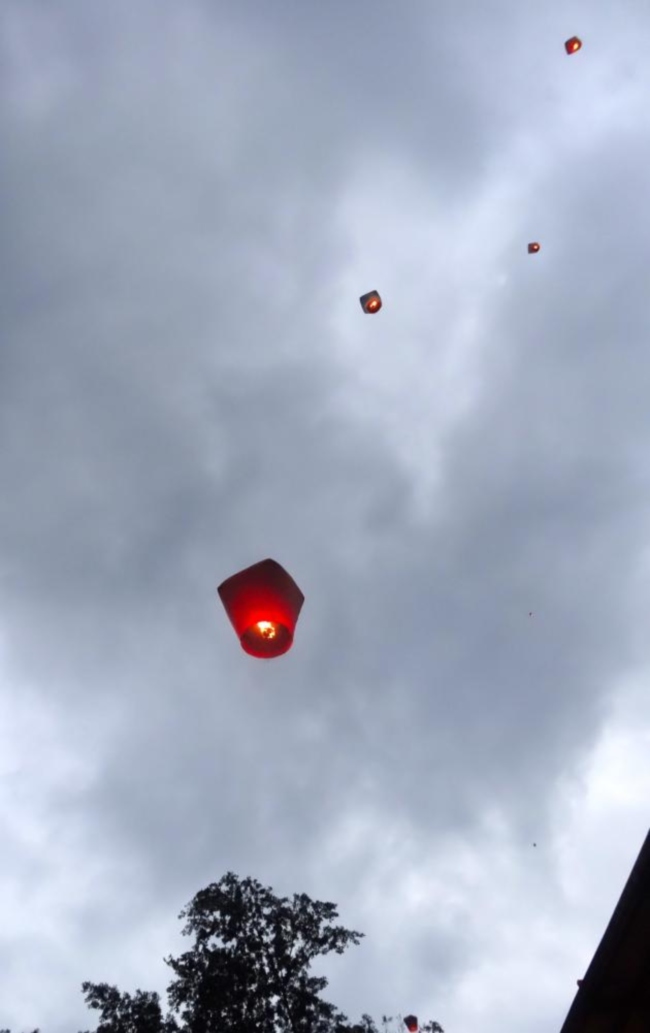 Between 100,000 and 200,000 lanterns are launched during one evening which is pretty stunning given it’s a full moon night (the moon hid behind the clouds much of this night 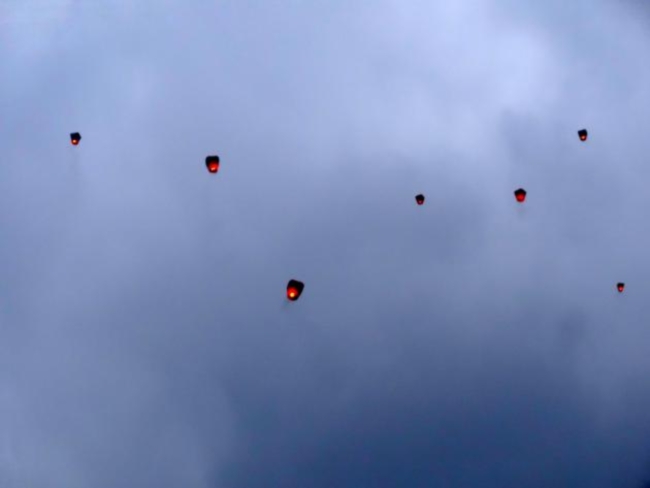 It was a balmy evening with no rain, but the sky lanterns fly even in the rain (given that it’s winter, there’s a moderate chance for sprinkles for this festival) 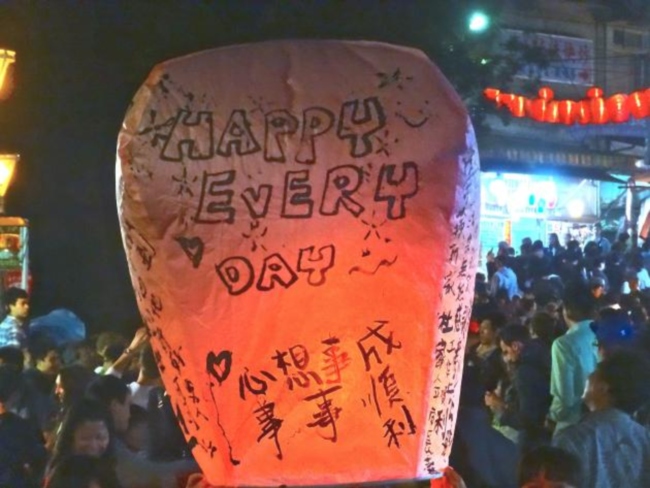 Heartwarming to see the various sentiments expressed on these aspirational lanterns