You Like Art with Your Music? These 12 Festivals Have Just What You Need

Have you ever stepped into a cavernous art installation so encompassing that you felt as if you were being swallowed whole? Or gaped at a painting so psychedelic that you thought you were trippin’, even if you weren’t? If you answered yes, chances are, your experience was at one of these music festivals (or Burning Man, which is not technically a music festival and therefore is not on this list).

Art, in its many vessels, has become a music festival fixture. From palatial shade structures that decorate the horizon with temple-like spires, to hallucinogenic paintings that look like a materialized DMT trip, and to kaleidoscopic 3D projection mapping, the dazzling array of visual stimulation can be endless. But grandiose art has not always been a part of the festival ethos, and even now there are several events that focus solely on the music. Some festivals, however, pride themselves in building these elaborate cultural citadels that foster and showcase some of the world’s most skilled artists—from the long-established to the up-and-coming. Whether it’s art installations that reach dizzying heights or watching a live painter create a masterpiece right before your eyes, this list features the music festivals that go above and beyond, creating and showcasing works of art that attract attendees in equal measure to the music. 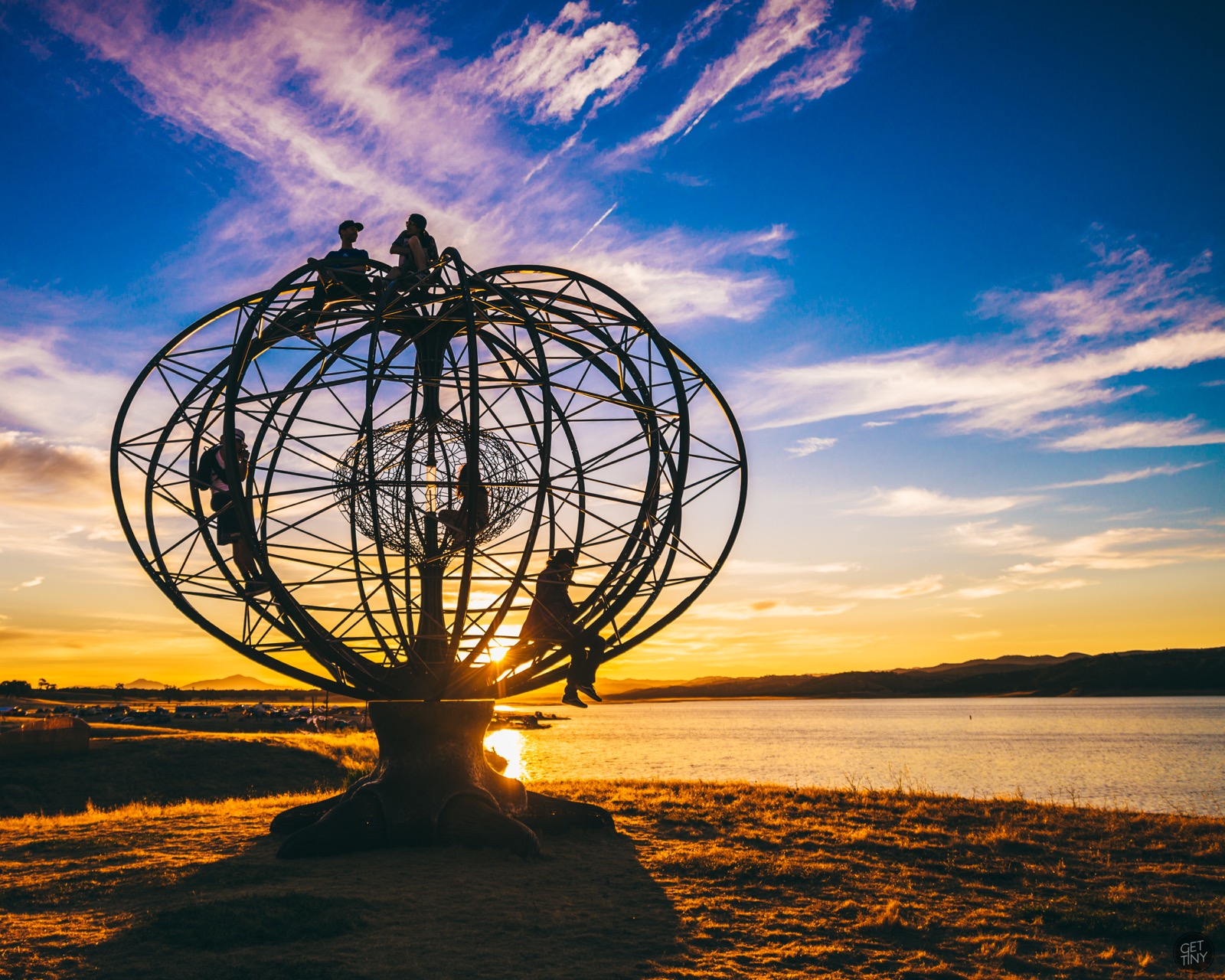 Photo by: Juliana Bernstein for Lightning in a Bottle

A beacon for the so-called transformational festival scene, Lightning in a Bottle has long wowed festival devotees with its otherworldly stages, installations and lineups. Organized by the creative collective Do LaB, what began as a birthday party for close friends has since blossomed into a global attraction garnering praise from attendees, performers, press and industry professionals alike. In addition to the intricately crafted shade structures and all-encompassing art installations, Lightning in a Bottle also bolsters a vast array of visual art, featuring live painting and completed pieces that are scattered throughout the festival and also displayed for purchase in a gallery. Artists such as Android Jones have also combined visual art with digital art through kaleidoscopic 3D mapping projected on various surfaces throughout the festival. 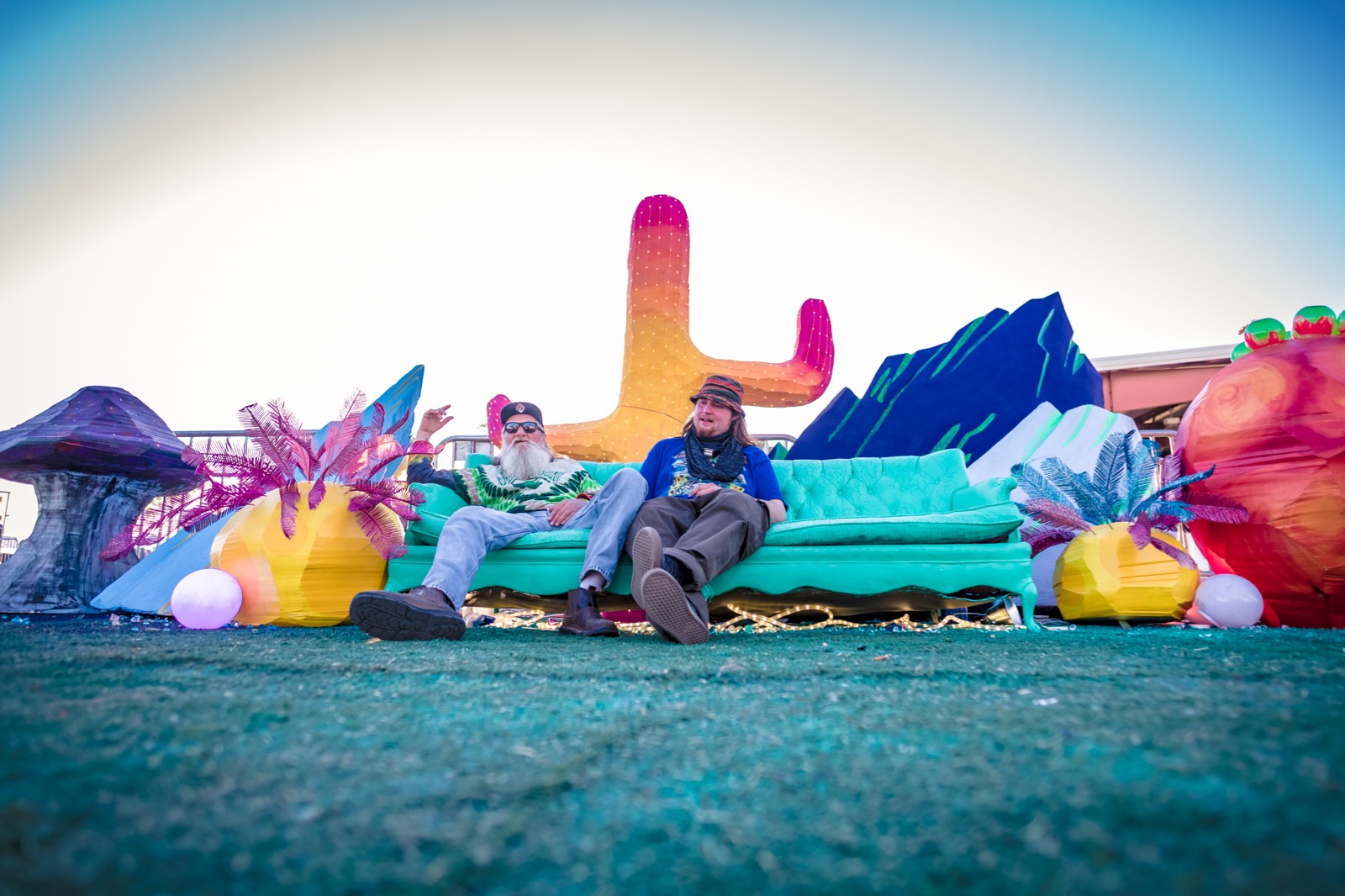 Visionary art pioneers and festival fixtures Alex and Allyson Grey have long shared the large typeface of headliner status along with the musical acts at the annual Gem & Jam Festival. Though they are not on every lineup, they have been on many making the festival a magnet for artists all over the world to participate. Alongside its eclectic lineup of electronic music and jam bands, Gem & Jam offers a high-end gallery, live painters, yoga, seminars and workshops. Taking place during Tucson’s illustrious Gem, Mineral & Fossil Showcase, paintings are not the only art dazzling the gaze of festival-goers; crystals are some of nature’s most treasured sculptures and are displayed (and purchased) in abundance.

The vibrant culture of New Orleans provides an ideal environment for the colorful, progressive and creative iconoclasts of the festival community. Celebrating the city’s rich past in conjunction with its progressive present, BUKU Music + Art Project is a vivid event in a city that is already well-known for its colorful festivities. From live artists painting massive murals on walls and shipping containers to professional face and body painters intricately slathering patrons in color and glitter, the art feels alive. It’s a moving organism that evolves, changes and eventually disappears—a representation of the importance of living in the brevity of the moment.

Score some dope merch online for 25% off with Everfest Premium.

Photo by: Lance Gerber for Coachella

The cascading pastel landscapes of the desert have long attracted artists and creatives. California’s famous Coachella Music Festival offers some of the world’s most unique art, and on a grand scale. From small canvas paintings to larger-than-life installations, two weekends a year, Coachella becomes a social media sensation as attendees from all over the globe pose beside their favorite pieces. While many of the pieces are created by renowned artists (such as Shrine, Poetic Kinetics, and Philip K. Smith), only a handful return every year, pushing those pieces into icon status (like Poetic Kinetics' giant snail). Coachella even gave Do LaB a place to grow, providing them with their own curated stage which was a huge factor in Lightning in a Bottle’s stunning evolution. Spanning two weekends, Coachella has grown into a home for all types of art set in front of an iconic background of palm trees, lavender mountains and cyan desert skies.

Enhancing the forest’s innate beauty, the Electric Forest organizers transform this swatch of pristine Michigan land into an electric cathedral of lights and music. The forest is a part of the artwork in every way as the installations and art are carefully woven into its ancient infrastructure. Careful not to harm the land or its trees, the event keeps the forest beautiful by implementing the “leave-no-trace” tenet preached by the transformational festival scene and Burning Man so that they may return year after year. At Electric Forest, nature and art seamlessly coalesce to create a fully immersive experience.

Though Symbiosis does not subscribe to the typical annual formula that most festivals follow, it occurs with just enough frequency to sustain itself. Often centered around a celestial event like an eclipse or equinox, the time of year it takes place is not consistent either. Whether it happens in consecutive years, every other year, at a different location (from California to Australia) or joins up with a collective of other festivals as it did for Global Eclipse Gathering in Oregon, the one aspect this morphing festival keeps consistent is its mind-blowing display of visual art and installations. Complete with art cars, climbable structures, gargantuan shade structures, and even art-boats and floating art installations (again, depending on venue), Symbiosis has branded itself as a global attraction. The diverse lineups might sell the tickets, but the art will take your breath away and remain emblazoned in your memory.

Taking place in the tropical climate of Florida amid verdant trees and dangling lichen, Suwannee Hulaween displays some of the most unique and organic artwork. Some pieces utilize found wood and plant matter plucked from the very forest that holds the festival in its warm embrace. Lights illuminate the trees as patrons can wander through this woodland wonderland, discovering hidden installations at every turn. Its connection to Halloween adds a unique twist as much of the art coincides with the beloved holiday. From sharp-toothed, lichen-crusted demons spouting water to kaleidoscopic, laser-cut dream catchers, there’s no telling what you might encounter at Suwannee Hulaween.

In Las Vegas, the city that boasts a Giza pyramid, Eiffel Tower, and the Empire State Building, an epic music and art festival in the Downtown arts district blends in seamlessly. Life is Beautiful has become a Coachella-esque festival that brings patrons from all over the world to experience comedy, stacked music lineups, refined cuisine and epic art installations. Every piece is a Technicolor dream that is immersive, interactive, consuming and extremely Instagrammable, from Meow Wolf's whimsical wonderland inside the Art Motel (a formerly abandoned Vegas motel transformed into an experiential art environment), to Felipe Pantone’s revamped 3D mural (now the world’s first 100% solar-powered mural, with neon lights framing the lightning bolt centerpiece), to Okuda San Miguel’s colorful bear standing tall and mirroring patterns from its adjacent mural. And that's not even counting the dozens of wild murals peppered around the walls of downtown buildings created just for the festival. Year after year, the festival prides itself on offering up a feast for your eyes. 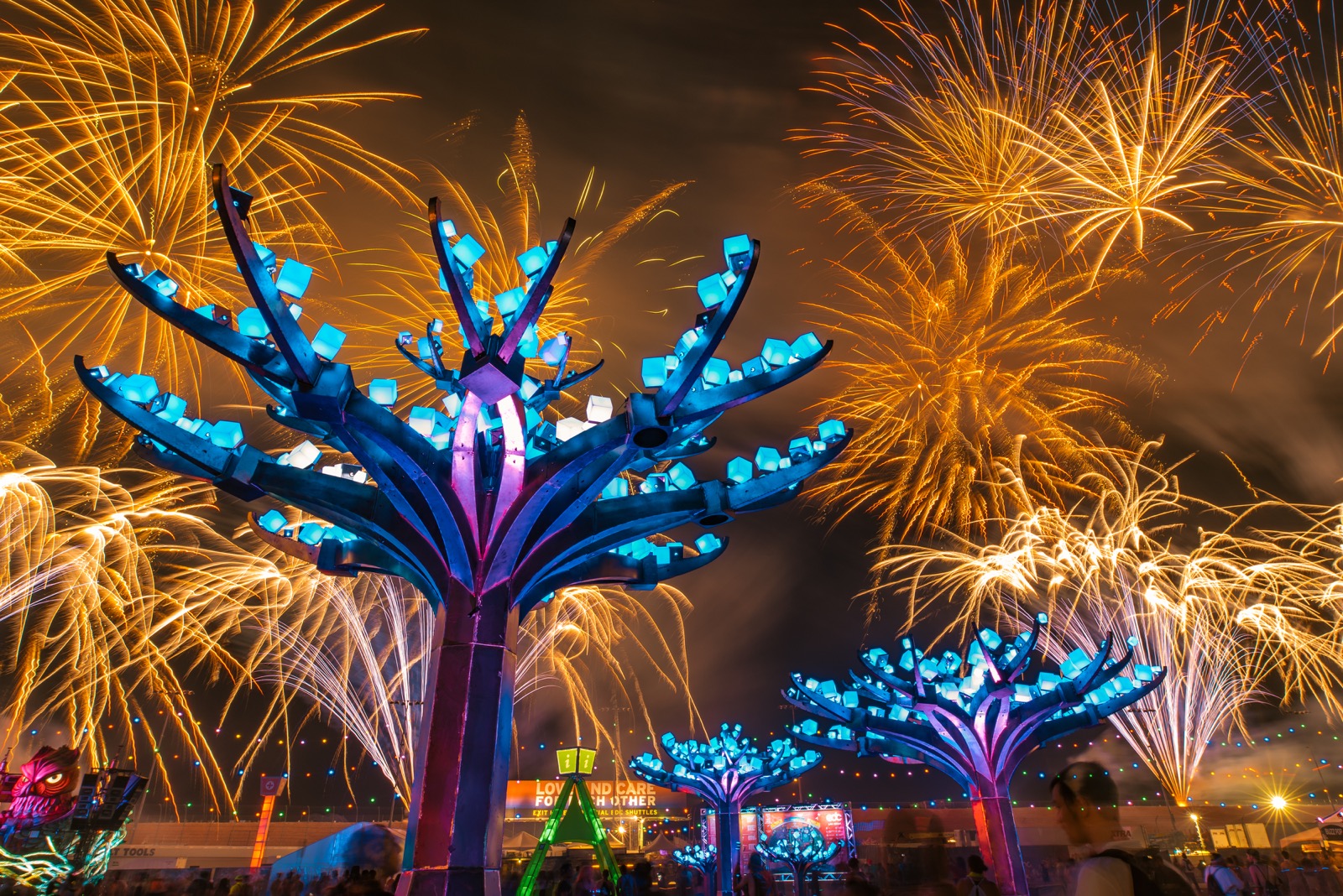 If it’s organized by Insomniac, you can be sure that the production value will be insane. What began as an intimate, off-the-grid desert party for friends and underground DJs has erupted into a global event and brand that has expanded to locations such as Orlando and Puerto Rico. Though EDC, along with several other “rave” style dance music festivals, have been under scrutiny from time to time, they have never faltered in their vision of a richer, brighter, and much more colorful future. Insomniac continues to remain unparalleled in its artistic endeavors (it even takes cues from Burning Man by featuring some of the playa's most well-known art), featuring vibrant installations and art cars that transports you into a grown-up Disneyland (I suppose that’s why they call it a carnival). 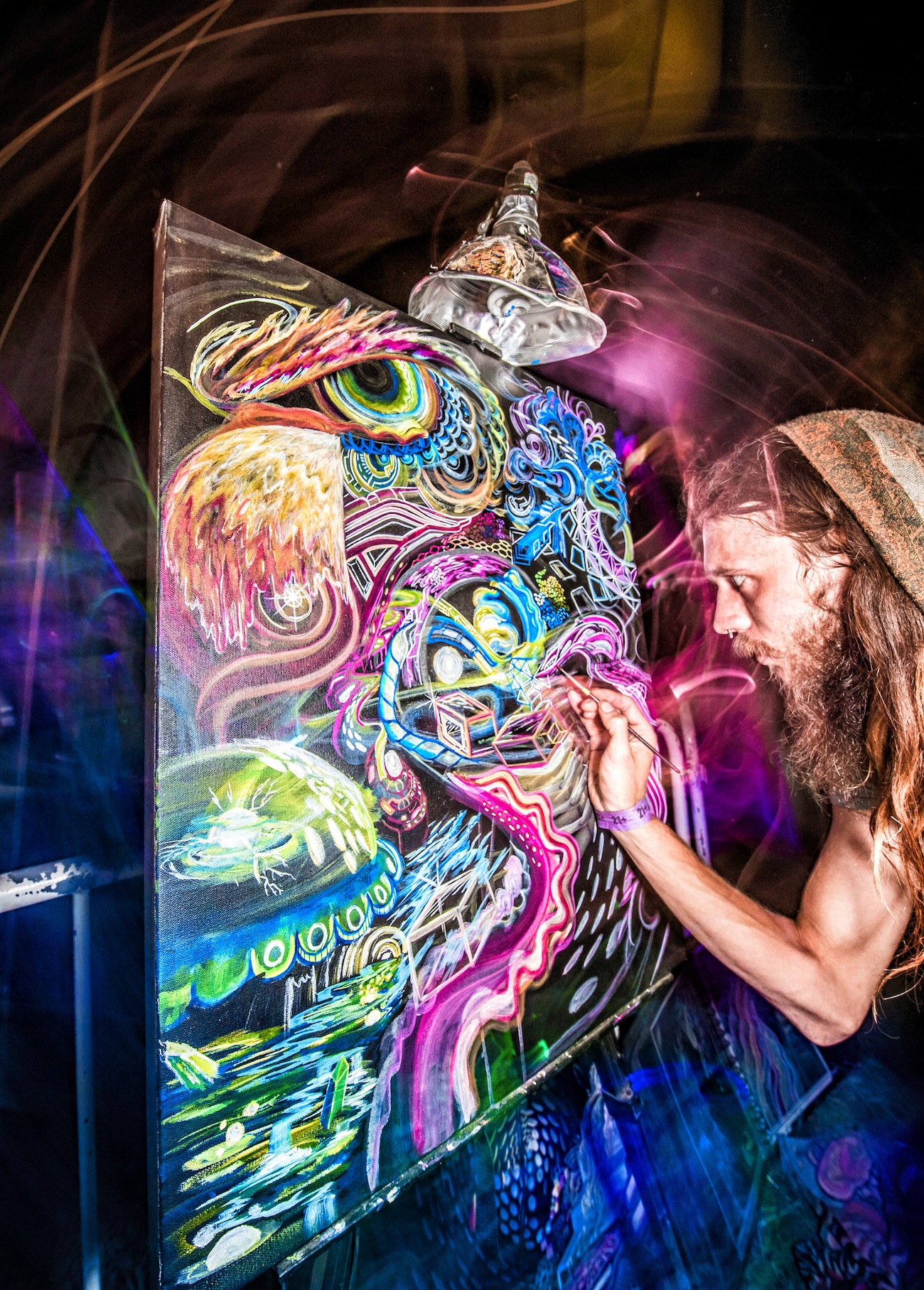 At the whimsical Hummingbird Ranch in Colorado is the bass-laden music and arts festival Sonic Bloom. Always featuring one of the most well-curated lineups in bass music, its beautifully crafted art and stages match the eccentric and colorful vibes of the festival-goers. Vibrant shade structures stretch above while intricately crafted stages provide the perfect backdrop for the psychedelic music that ensues. Live artists caress their canvases, using trees as their easels while tripped-out onlookers follow each stroke with keen intensity. Visionary art is the predominant style featured at Sonic Bloom, creating a perfect union between the aural and visual senses. The experience is enrapturing—wandering patrons are drawn into the pieces, getting lost in their geometric designs as bass rumbles beneath their feet and palo santo tickles their olfactory systems. 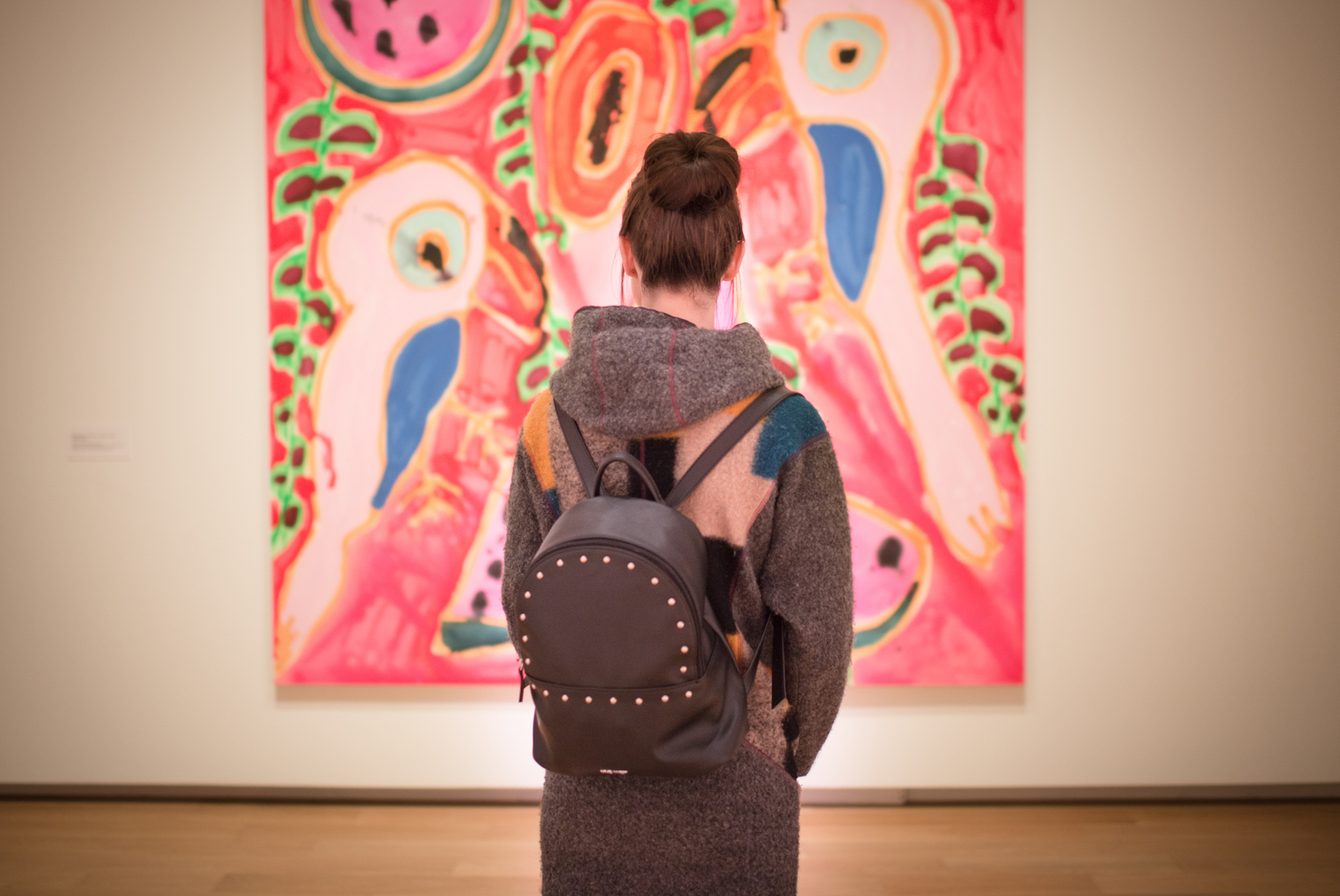 Only in its second year, Fortress Festival promises to be a noteworthy attraction for both music and art aficionados alike. Taking place on the grounds of Will Rogers Memorial Center in Fort Worth’s Cultural District, the two-day festival is a partnership between Fortress Presents and the Modern Art Museum of Fort Worth. As opposed to building and bringing the art, Fortress Festival incorporates Fort Worth’s diverse community and artistic character into its sundry lineup of musicians and innovators. Attendees can amble between the two outdoor stages, utilize city conveniences, taste the various food truck offerings, and appreciate the Modern Art Museum’s vast collection as well as various other galleries throughout the city. The fact that it’s far more affordable than the average festival (under $100 for both days) is an added bonus.

Get Early Bird pricing, VIP for the price of GA, and more with Everfest Premium.