Ironically, it was a band called Dead or Alive which recorded this hit pop song of the mid-1980s. Well, I was feeling very alive when the dervishes made their first spin around the circle. The audience was silent and transfixed.

This reminds me of Rumi’s writing on “The Three States.” He wrote, “Human beings have three spiritual states. In the first, a person pays no attention whatsoever to God and worships anything – sex, money, rank – but God. When he starts to learn something deeper, then he will serve no one and nothing but God. And when he progresses in this state he grows silent; he doesn’t claim: ‘I don’t serve God,’ nor does he boast: ‘I do serve God’; he has gone beyond these two positions. From such beings, no sound comes into the world.”

Andrew Harvey in Kabir Helminski’s fabulous book “The Rumi Collection” suggests the following about Rumi’s influence, “What Rumi in his life and work combined at the highest level was the philosophical interest of a Plato, the emotional grandeur and vision of a Christ or Buddha, and the extravagant literary gift of a Shakespeare. Rumi could, in fact, be called the Shakespeare of mystics, for just as Shakespeare explored all the nuances of human character and of the play of Good and Evil, so Rumi, in his astonishingly rich and complex oeuvre, explored all of the aspects of the extreme, gorgeous drama of the soul’s journey to God.”

For me, the one-hour ceremony was less about spinning me and more about rounding me. Just as a round circle symbolically suggests an inclusive openness, I felt a deep connection with my fellow spectators, with the Semazen, and with the divine as we experienced this together. 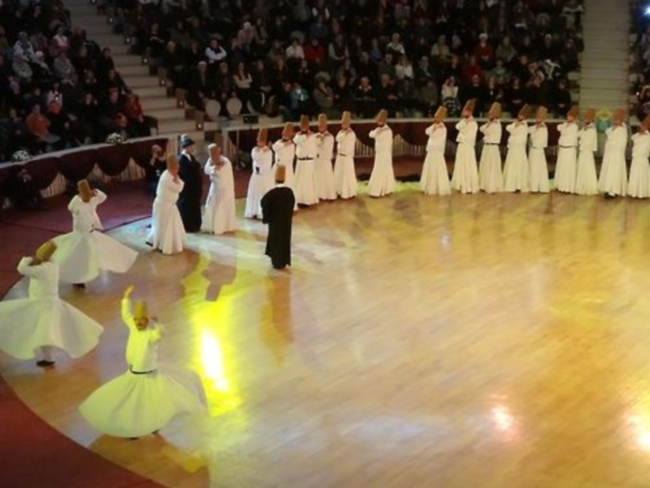