Ever since Burning Man first sold out in 2011, there has been a major issue with scarcity around tickets. Although the Burning Man Organization has tried to mitigate scalping and push for a higher attendee limit, the reality is that as the event’s popularity continues to grow, some of us simply won’t get to go to Burning Man. So what's a would-be Burner to do? Well, there are several alternatives to “That Thing In The Desert.” Some (Nowhere, AfrikaBurn) are “regionals,” officially recognized by the Burning Man Project. Others (Secret Garden Party, What the Festival) were inspired by their founders’ trips to the desert. While there are other opportunities than the general sale to get tickets (please don't pay over face value!) you may want to put some of these 11 festivals on a back...burner.

AfrikaBurn is the largest regional event outside of Black Rock City and has been running in the Tankwa Karoo National Park since 2007. For those who have been to both, AfrikaBurn most closely resembles Burning Man with mutant vehicles, theme camps, costumes and lots of fire. Like Burning Man, AfrikaBurn is all about creative expression and boasts a few big art pieces to rival its parent festival in the United States.

Electric Forest, which has been called Burning Man in the woods, has created a participatory artist culture by repurposing objects from the nearby Sherwood Forest. With contortionists dressed as butterflies and trippy movie screenings set up in the midst of the dark forest, this festival is for people who love Tim Burton films and enjoyed getting lost in the woods as kids.

The experience at Fusion is very much like a German Burning Man, an attempt to experiment with integrating new attitudes meaningfully into one’s daily life; for that reason alone, it’s a must-see. Unplug from the grind, learn about yourself and create something, if only for a collective good time. Much like Burning Man, Fusion is a polarizer and not for everyone, but the true fans love it and live it, and no amount of rain or anything else can take away from the collective, creative life lived for these few days each year. 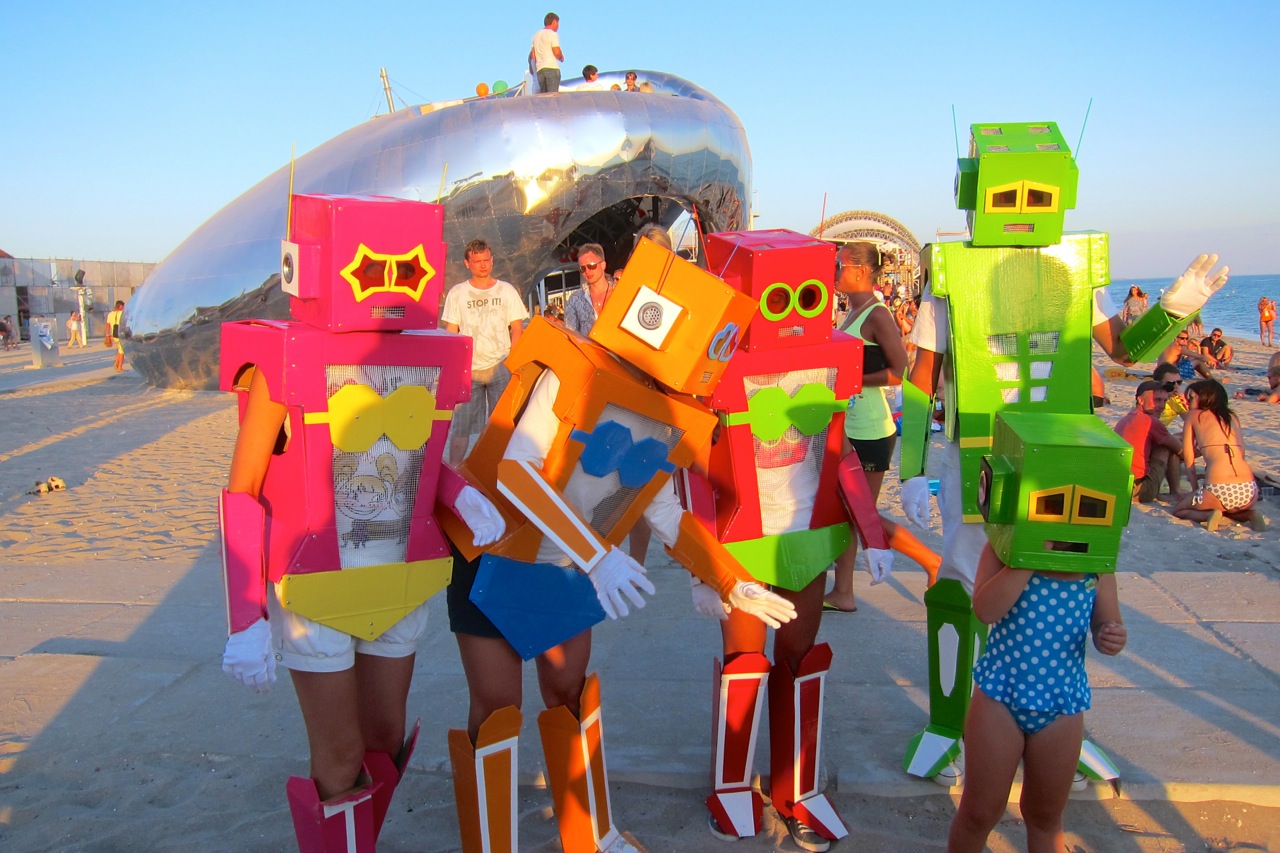 Parallel festival universes do exist, with a twist. Take Burning Man, turn its dusty playa into a sandy playa, and place it right on the edge of the Black Sea. Throw in some raw Eastern European energy and some sexy style, and you have one hell of a beach bash. KaZantip (aka "Z") is a tour-de-force, a party with principles that goes on for 24 hours a day for nearly a month.

Artists and craftsmen lighting their works of art on fire amidst a bacchanalian celebration that goes on all night long? Sounds like Burning Man, but this is an urbane European version with an even more diverse representation of attendees and locals. The excitement and fear of watching 400 spectacular sculptures going up in flames in a beautiful coastal city may remind you of another Spanish festival: the Running of the Bulls. But the visual feast of Las Fallas won’t have you running in the streets. It will have you grabbing your camera. It’s one of the most photogenic festivals in the world.

Lightning in a Bottle (California, USA) 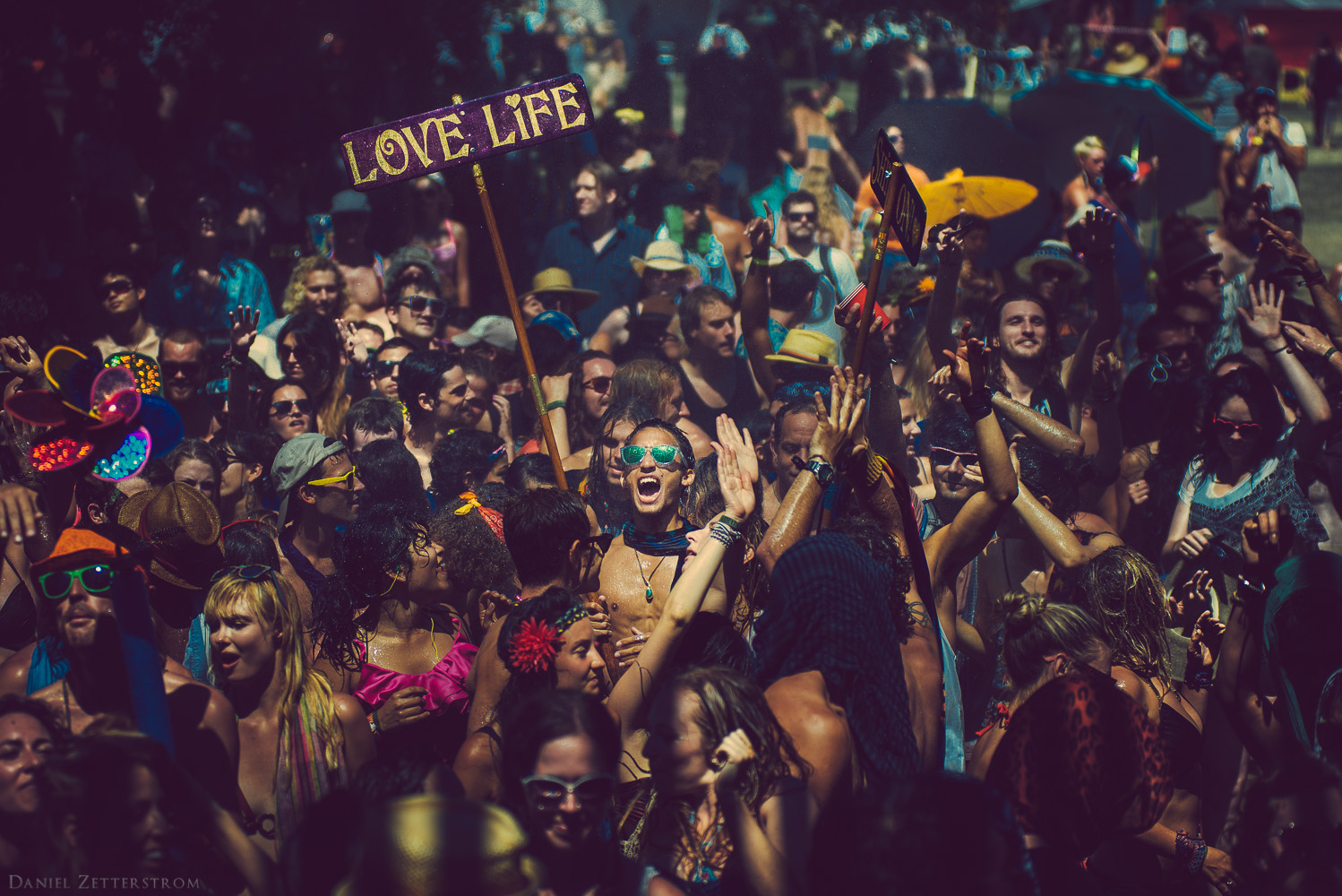 Photo credit: Daniel Zetterstrom, Courtesy of Lightning in a Bottle

Take a creative powerhouse like Burning Man, with the same mind-warping musical talent, and trade the desert for lush greenery, rolling hills and a scenic lake, and you have the fairytale of Lightning in a Bottle (LIB). This 4-day celebration of art, sustainability, music, performance and life aims to spread the proverbial lightning beyond the bottle and into the daily lives of all its participants.

What was Burning Man like back in the early days, a quarter century ago? If that's a question rumbling around your mind, then you might want to become a citizen of Nowhere. In 2012, Nowhere's population skyrocketed to 1,000 from just a couple hundred a few years ago, which gives you a sense of the intimacy amongst the people and the primacy of art that defined Burning Man’s beginnings. 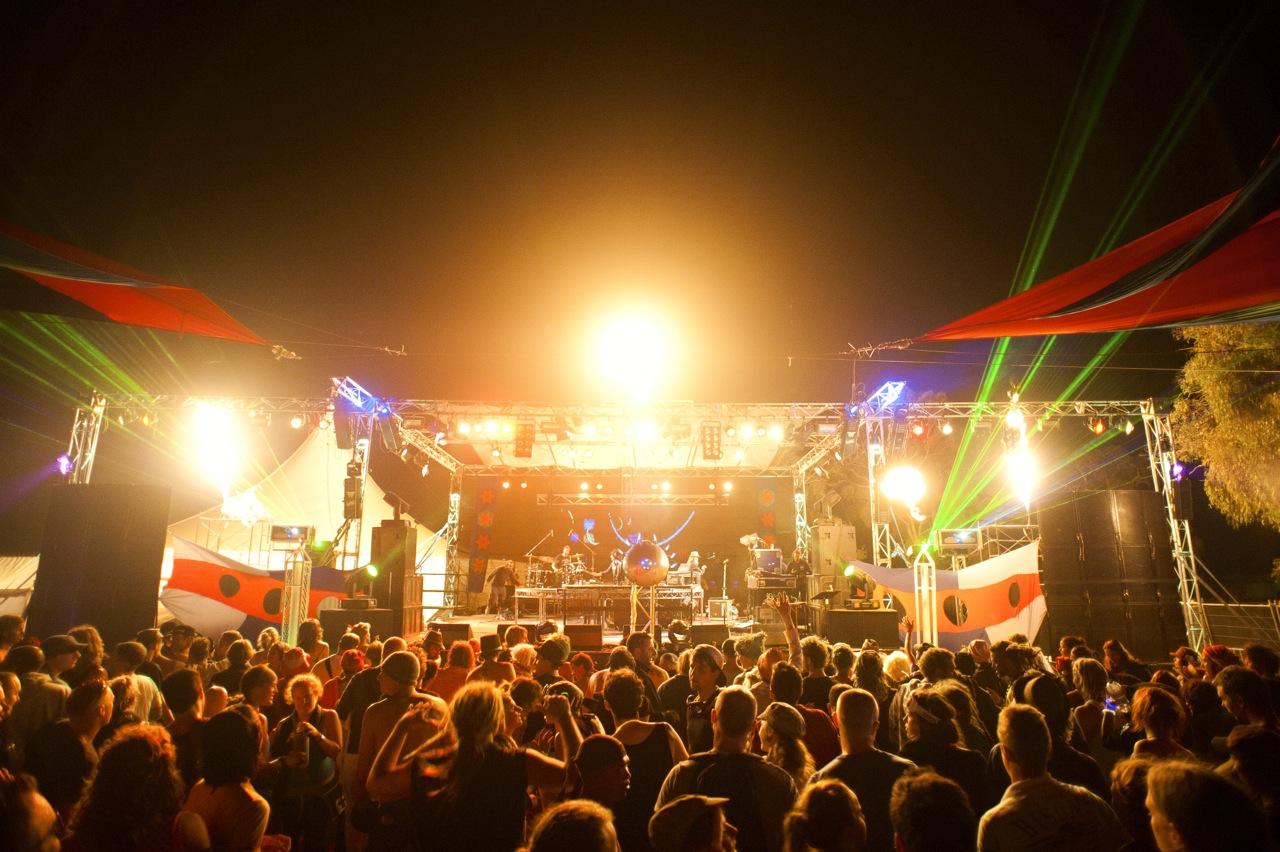 The only major festival in the world with a more diverse set of wardrobes is Burning Man. Expect the unexpected. Rainbow Serpent is well-known for its great taste in eclectic music styles. You're likely to find something for everyone here. But, like Burning Man, you need to come prepared for this festival as you're going to pack it in and pack it out which means it's helpful, if you're a virgin, to find a veteran who's done this festival before.

Take the creative, DIY artistic element of Burning Man, slim it down, fancy dress it up (that’s costumes for you non-British folk) and set it in the lush English countryside and you've got the Secret Garden Party. Each year has a theme, which costumes and camps are built around. The Secret Garden Party was started in 2004 by Fred Fellowes, who was searching for something different to the mainstream British festivals. Much of the inspiration for this festival comes from the creativity of Burning Man. The founders make a pilgrimage to the Black Rock Desert every August to spread the good word about the Secret Garden Party and cavort on the playa. 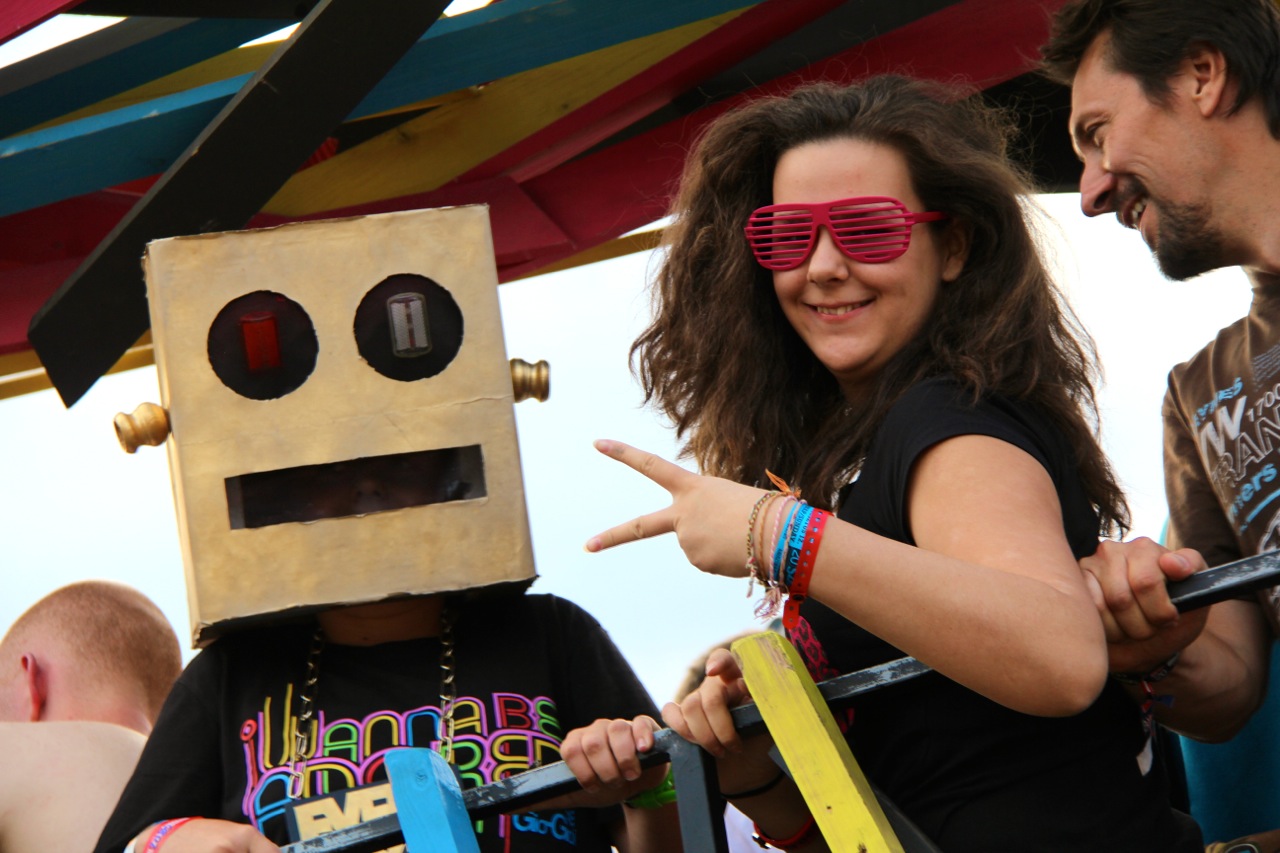 Some people like to call Sziget the Eastern European Burning Man. Yet, while there are similar creative elements, it’s a fully-fledged festival that has transcended comparison. First and foremost, Sziget is a music festival. It attracts big name musical talent, but it’s the sheer variety of musical experiences that sets Sziget apart. There’s a huge amount of interactive art spread throughout the island. Sziget appears to be taking note from Burning Man by adding more interactive art each year. The Tarot Labyrinth is a longtime favorite where your path is determined by the fate of the cards. Sziget takes mazes to a new level with the Luminarium, an inflatable chill zone that resembles a cathedral from outer space.

What The Festival (Oregon, USA) 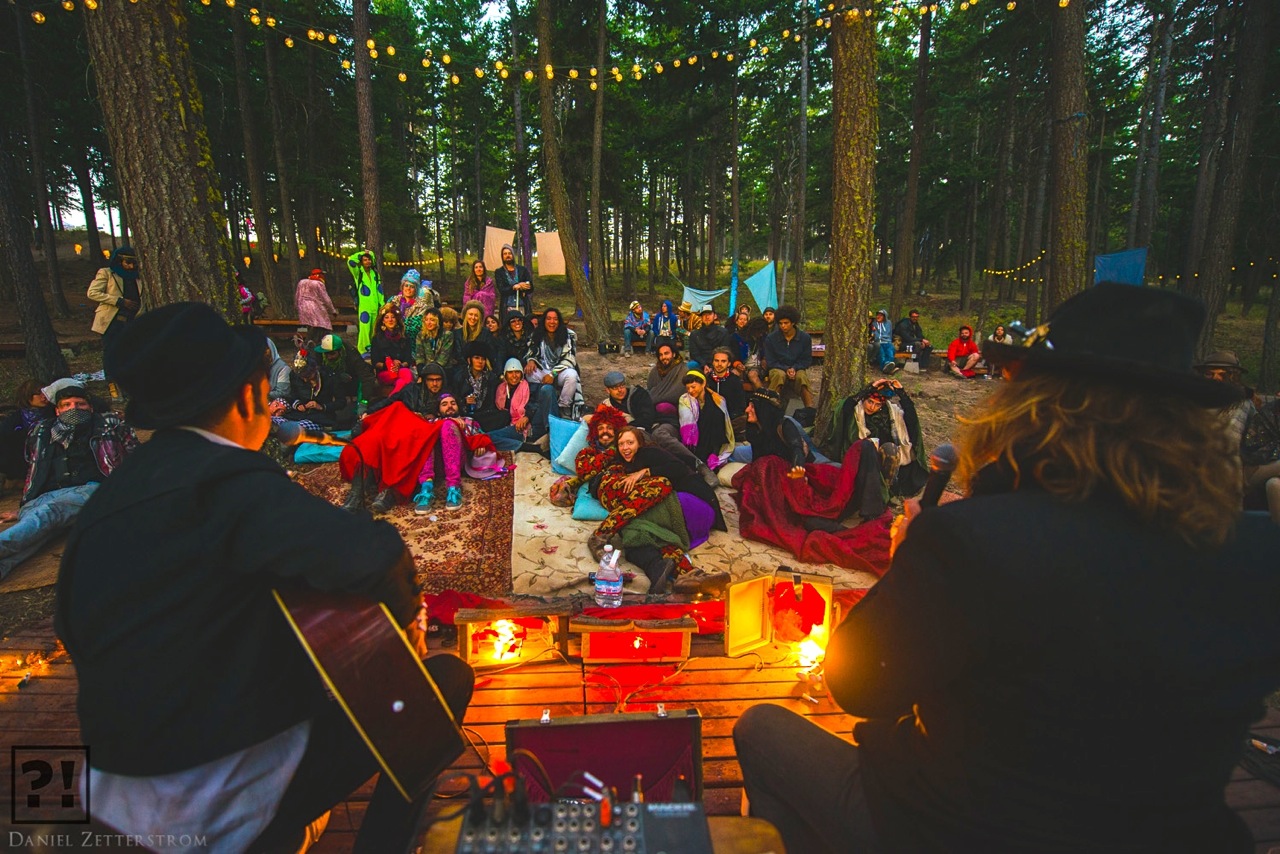 Photo credit: Daniel Zetterstrom, Courtesy of What The Festival

There are legions of Burning Man fans who feel the event is now too massive for their tastes. Plus, it’s quite a job preparing for and getting to that festival in the desert. What The Festival is the kind of event that has sprung from the need for an easier-to-experience, more intimate festival. Yes, they’ve taken some of what works at Burning Man (including engaging the folks who create the popular Opulent Temple music venue), but added in some touches like the signature wading pool that create an experience that is purely WTF.

If you don’t have a ticket yet and are determined to attend Burning Man 2014, never fear. There is the STEP ticket transfer program and the small OMG sale right before the event. You may have friends who decide not to go, or there may be an art project that needs your help. Where there’s a will there’s a way but if you somehow lack one or the other, the festival world is certainly not short on alternates to That Thing in the Desert.

For more suggestions check out our full list of the world's best festivals.