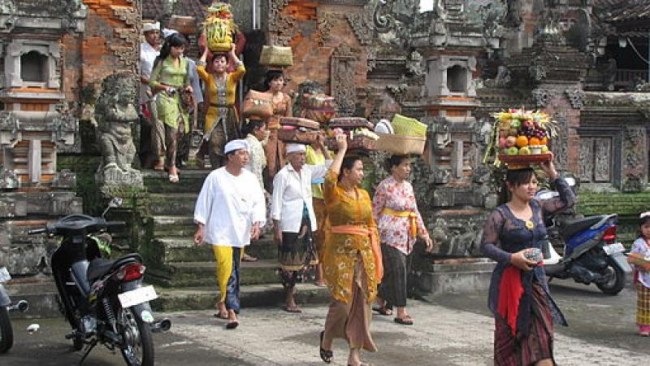 Another day. Another festival. While its Hindu cousin India may hold the Gold medal for the most high profile and interesting festivals in the world, no place on earth celebrates collective effervescence more frequently than the Indonesian island of Bali.

Eighteen years ago, I willed myself to Bali for the first time. It’s not an easy trek; at best, it’s eighteen hours in that flying tube in the sky. I was in the early stages of growing my boutique hotel company, Joie de Vivre, but I was intrigued by the day-to-day joie de vivre I’d heard existed on this magical island. My experience was nothing short of awe-inspiring as on my first day I witnessed Tumpek Landep, a grand celebration of various objects. On this day, the focus was metals so practically every car in sight had fresh flowers tied to its bumpers. The next day was a cremation ceremony and the day after that held a traditional village festival called an odalan.

With more than 20,000 temples on this island of nearly 4 million people, it’s no wonder that every day is a holiday. Each village has at least three temples and every 210 days (based upon the Balinese Wuku calendar), each of these temples celebrates its birthday. With fruit and flower offerings piled four feet tall on women’s heads and feasts fit for a king, an odalan can last for several days and visitors are heartily welcomed into the festivities.

Rites of passage? In American culture, this may mean having your first beer or losing your virginity. But, in Balinese culture, the extended family has a birth celebration for a new child, then a celebration on the 105th day to name the child. The child doesn’t touch earth for its first 210 days for fear that the evil spirits on the ground will inhabit the baby’s body (which means that a young baby is always being held). On the 210th day, there’s an Otonan anniversary for a child, then a Mesangih teeth filing to welcome adulthood a dozen years later. By filing away the sharp points of the canine teeth the Balinese believe that human behavior such as lust, greed, and anger is removed from the person and it also signifies to the gods that this person isn’t a demon with fangs. With each of these rites of passage, there’s an extended family celebration that can include thousands of people.

And, the crescendo celebration for a life is one’s cremation that happens sometimes years after the person has actually passed away. When the deceased is cremated his or her soul is released and is able to continue the journey to heaven followed by reincarnation. Ornate and artful towers are created which store the body (bones) and family heirlooms and the tower is turned multiple times to confuse the demons about where they’re going. Once at the temple, the body is placed in the sarcophagus in the form of a bull, women cut locks of their hair to place with the body, and the priest sets the bull on fire to purify the deceased. This is quite an extravaganza for one person’s cremation – when you imagine the movable feast that includes gamelan orchestras and tourists as well – but most cremations include many people being purified at the same time so it can stop a village in its tracks. I’ve always wondered how these industrious people get their day jobs done.

Lastly, every society has its larger festivals and the Balinese are no different. The Balinese celebrate two different calendars beyond the typical Christian one and, of course, they have celebrations for both: the ten-day Galungan festival and the more animated and silent Nyepi festival, which includes thousands of Ogoh Ogoh puppets and sculptures (presented to scare away evil spirits the day before the whole island goes completely silent with no one leaving home – so as to trick the demons into thinking the island is abandoned.

As I experience these elaborate fests that represent almost primitive ritual, it’s easy to forget that this is a modern island with two swanky Four Seasons giving the bourgeois bohemian luxury seal of approval. (And, yet, this is a place where many locals still primarily bathe in the river and don’t have indoor plumbing.) Each time I come here, I channel my inner Margaret Mead and set off with my trusty guide Made Jiwa to witness a celebration that puts our “collective wave” at the American football stadium to shame.

Why has Bali become the capital of the world for modern day mythology? Certainly, the local religion (called Agama Hindu) has some relevance. Balinese Hinduism is an amalgam in which gods and demigods are worshiped alongside Buddhist heroes, the spirits of ancestors, and indigenous agricultural deities. Most importantly, animism – the belief that everything has a spirit – creates a sort of reverence that deserves celebration. And the fact that good and evil are in constant combat in the Balinese mind means that daily reminders are needed for how to live a good life. This is also why you see daily offerings placed throughout a home, at the doorways of local shops, and in rice paddy fields (check out my Huff Post blog on how to apply daily offerings to your work life).

The Balinese have clung to their ancestral rituals through a series of conquerors from the Dutch to the Javanese who have come to this volcanic island to try and tame the locals. More recently, this has come in the form of millions of tourists who descend on this little speck of paradise seeking their own joie de vivre, including author Liz Gilbert, as documented in “Eat Pray Love” (the most common non-Balinese sightings here are the droves of middle aged American women hoping to find their own version of Gilbert’s bliss). The gracious and adaptable Balinese, who created a complex means of irrigating their fields from the sacred mountains to the sea, have also created a complex, authentic culture built on unique celebrations that remind them who they are in this increasingly commoditized world.

For me, the Balinese remind me that life is just one endless celebration and then we die and then, YIPPEE! we can celebrate again. But, more than that, they remind me of the power of the collective when experiencing joy. In the United States, our individual achievements are celebrated and we wonder why we often feel so alone. Alone doesn’t have a synonym in Balinese.