El Colacho: In Spain or Insane?

Is the tiny, ancient Spanish hillside village of Castrillo de Murcia the best or worst place for a baby the Sunday after the annual Christian Corpus Christi feast? What would I find at an indigenous Catholic festival that Pope Benedict had denounced? Do the Spanish have the weirdest festivals in the world? These were some of the questions rumbling around my brain as I made the 43-kilometer trek by taxi from the charming city of Burgos in northern Spain (no public transportation to this remote village). 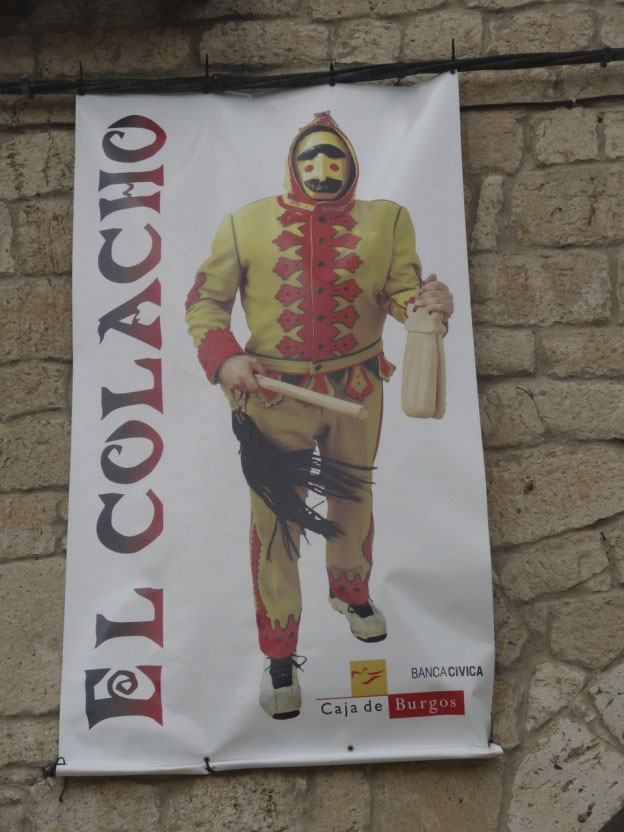 Since 1621, the superstitious townspeople of Castrillo have created this baby jumping ritual that has turned into a four-day festival. While there were a couple of television crews, don’t expect big crowds. There might have been 500 people there at the peak time in the exquisite chapel just before the 6 pm baby jumping, but during a good portion of the day (I was there from noon till 8 pm), there was rarely more than a couple hundred and 95% of them lived within a 50-kilometer radius. On the drive there, I asked the taxi driver to stop when I saw a four-generational family celebrating by the side of the country road, as they were taking their newborn daughter the 5-kilometers to the El Colacho celebration. 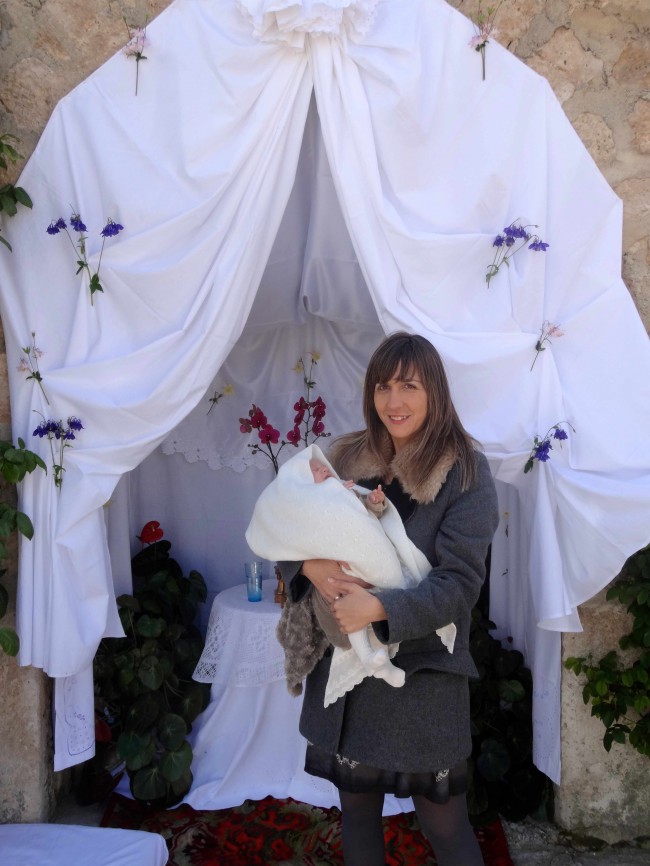 As I arrived in this nearly deserted town – or at least that’s how it felt – I kept thinking that some masked man might pop out and attack me at any moment. I’d seen pictures of this yellow-garbed devil incarnate before, but it wasn’t until a couple hours later that I first got my visual of the jumping, whip-cracking Colacho. 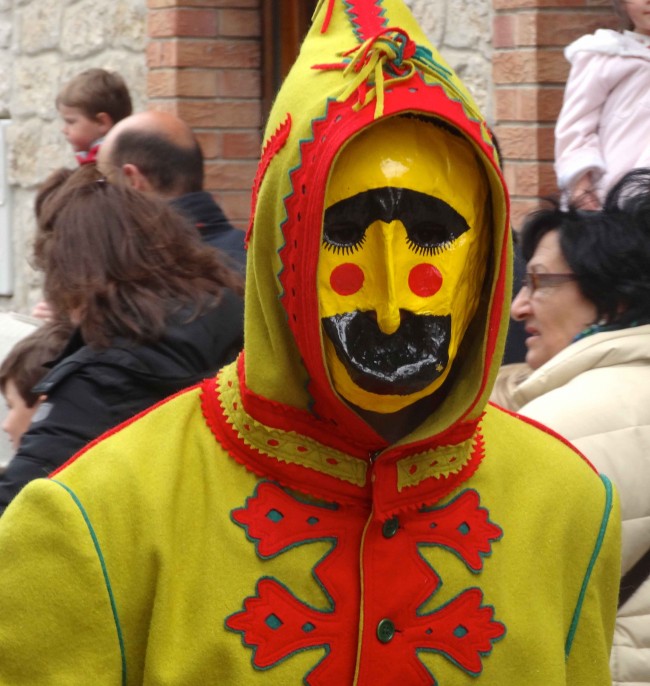 In the meantime, I realized I was in the right village as there was even a street named after this dreaded masked man who performs baby exorcisms in public plazas. 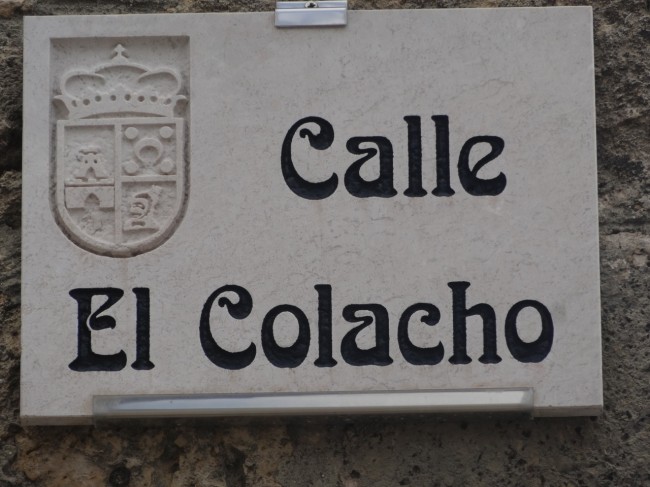 So, with a little time to kill, I started reading more about this cute, but quirky custom. The idea behind El Colacho is that the jumpers (there are two of them for the actual ceremony), with their devil costumes, whips and truncheons, are personifications of diabolical evil. When they leap, evil follows them and the babies’ souls are cleansed. It’s a communal baptism for the community’s babies who haven’t traveled around the sun once yet.

If you’re a devout Catholic, you know that the feast of Corpus Christi happens two weeks after Pentecost and it’s a time of renewing faith. Well, in this medieval town, renewing faith means believing that your able-bodied men in devil’s uniforms may have tried out for the Spanish Olympic team in the long jump competition. But, what’s bizarre is how this sort of pagan ceremony gets mixed with the Catholic faith in this region. Here’s a photo showing El Colacho, without his mask, and his drummer sitting near the side as the Priest addresses the congregation in church… 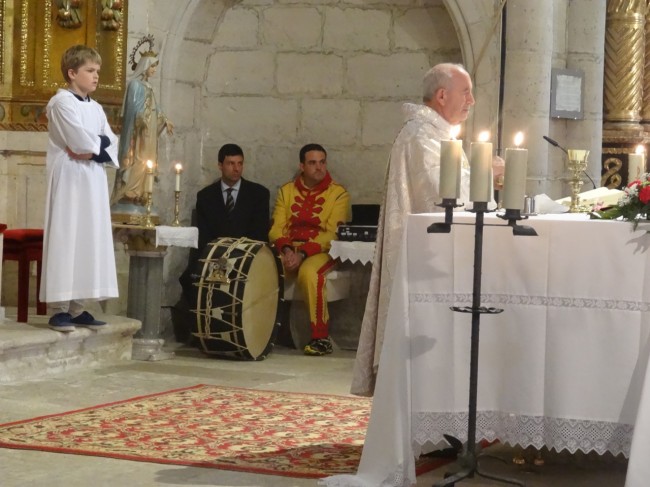 The mysterious Brotherhood of Santísimo Sacramento de Minerva organizes the festivities throughout the day in tandem with the local clergy. The belief is that the “devil’s leap” will cleanse the babies of original sin. Here’s the view from inside Castrillo’s church, just before everyone heads outside for the devil’s first run around town:

Were you ever allowed to make that kind of racket in church? And, here’s the procession leaving the church to the town square. Watch El Colacho’s speed as he hauls off to try and whip one of the heathen:

I had my day of reckoning with the devil soon after he entered the square. I did my best to turn invisible, which is hard to do when you’re the only American in the crowd and you’ve got a camera strapped to your face. He whipped me twice. Thank God for my heavy-duty Levi’s. 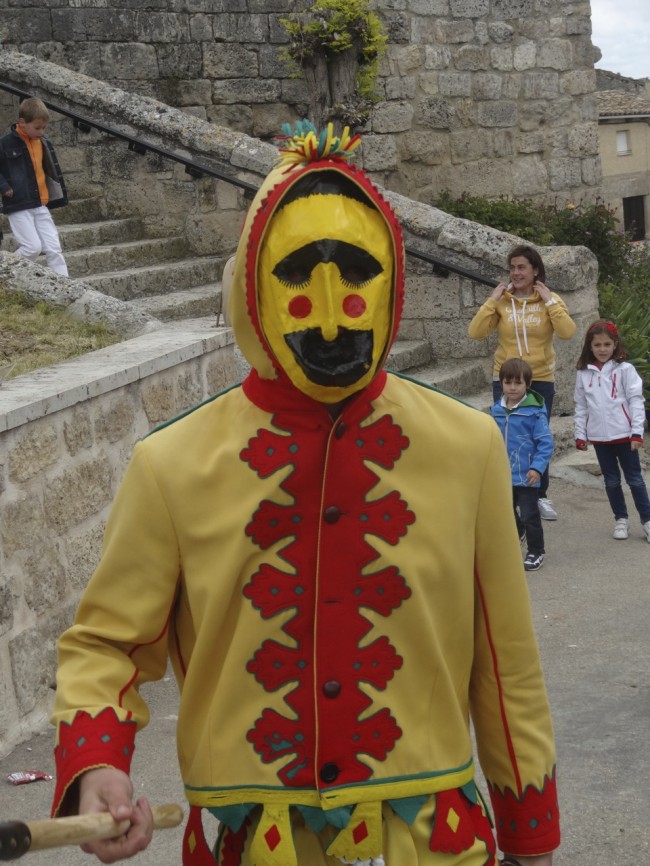 The first 4-5 hours of the day until 6 pm is just a series of four ambles around the village with El Colacho whipping people with his drummer providing the soundtrack, the clergy and church leadership dressed like undertakers, and the townspeople egging El Colacho on and scrambling for cover. This gives a sense of these little village journeys: 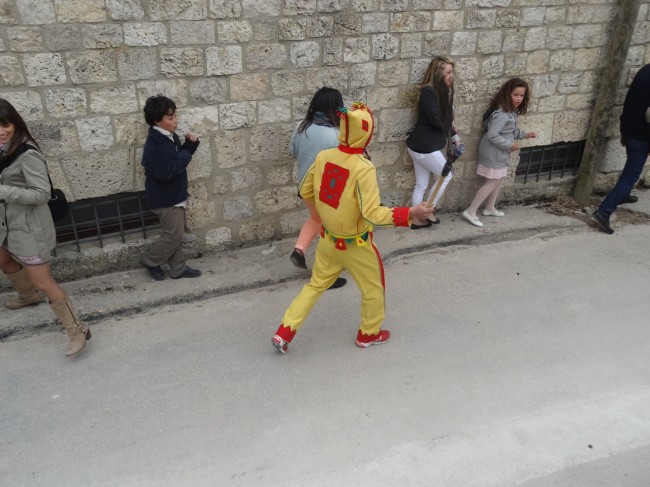 Even little girls don’t escape the wrath of El Colacho 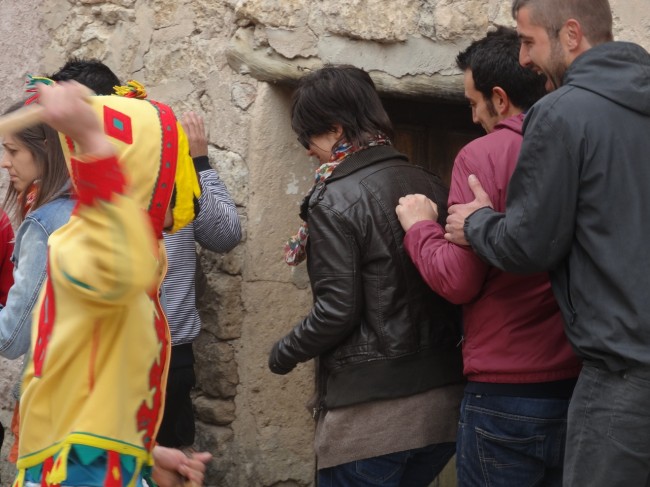 Line up for your whipping 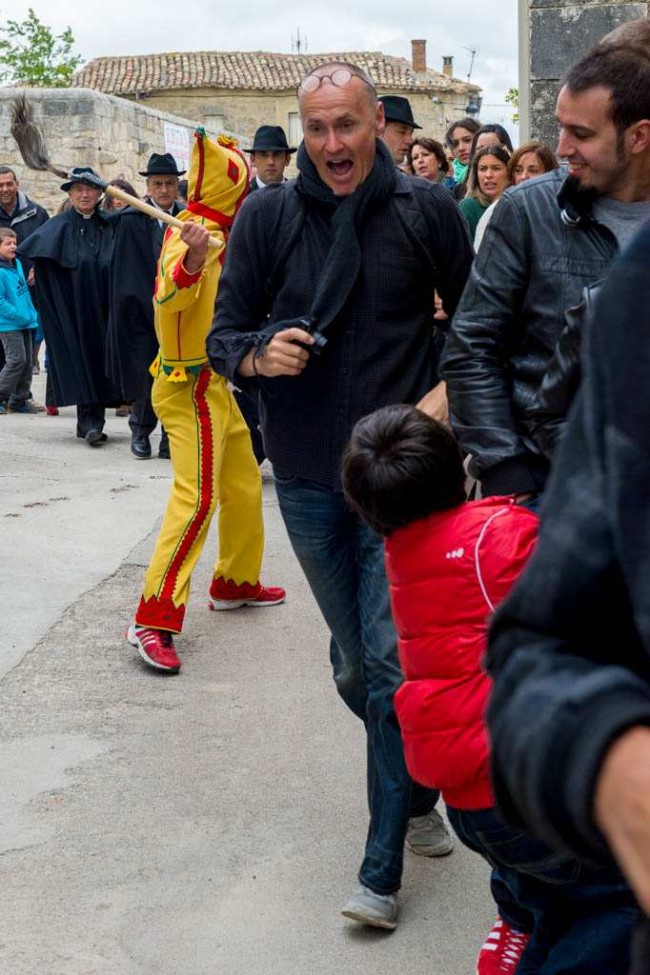 Being a festival reporter can be dangerous! Photo courtesy of Nick Gammon

Since a village circular amble only takes ten minutes, we end up back in the town square where we drink rustic wine for an hour until the next amble. Each progressive amble regresses time-wise. 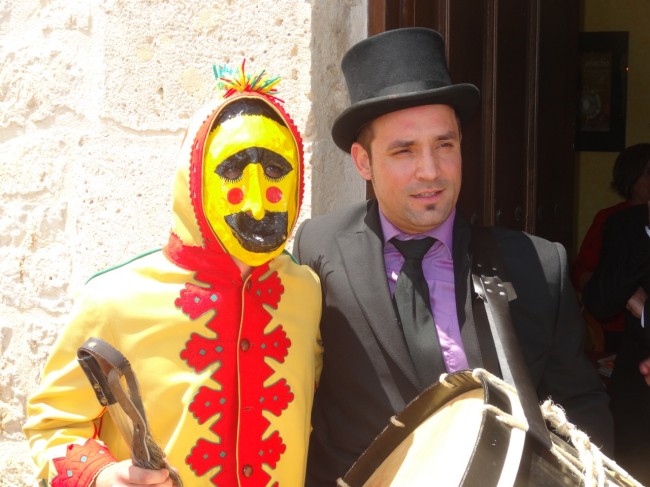 El Colacho with his drummer…post-amble, pre-drinking

You haven’t seen nothin’ yet. Wait till you see the next blog post in which I’ll show you the actual baby jumping. But, suffice to say, a christening is the way the church introduces an infant into the ways of Christianity. El Colacho is a strange mixture of church and comedy with the christening being about about the ways of community in Castrillo de Murcia. It’s not a surprise that Vatican City looks down its Roman nose at such frivolity. They wouldn’t know fun if it hit them in the fanny. Actually, I take that back, as some Catholic Priests might prefer that kind of fun. 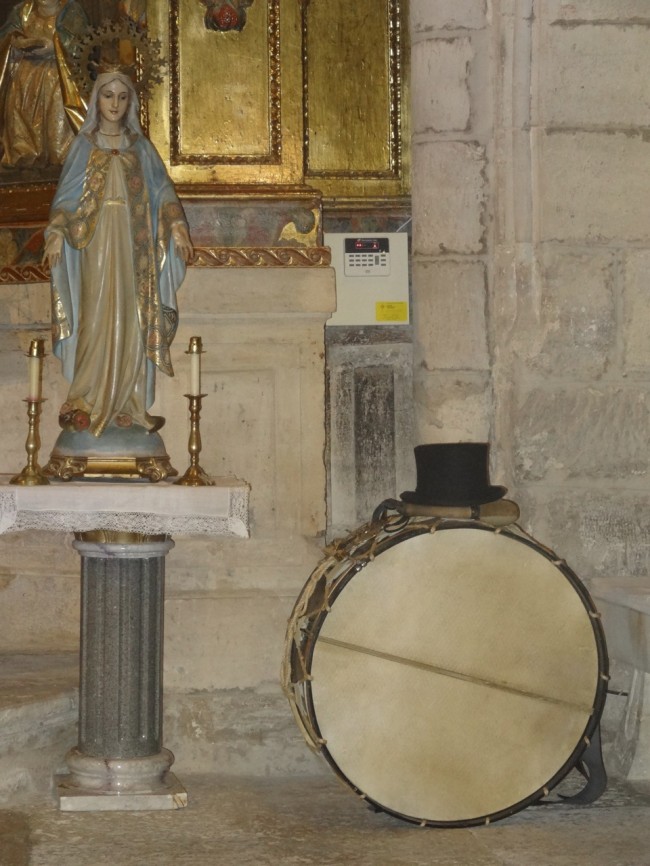 I felt fortunate to be witness to the opening of the curtain to a cultural estate inherited by the Castrillo’s ancestors, adapted and interpreted for generations to come.