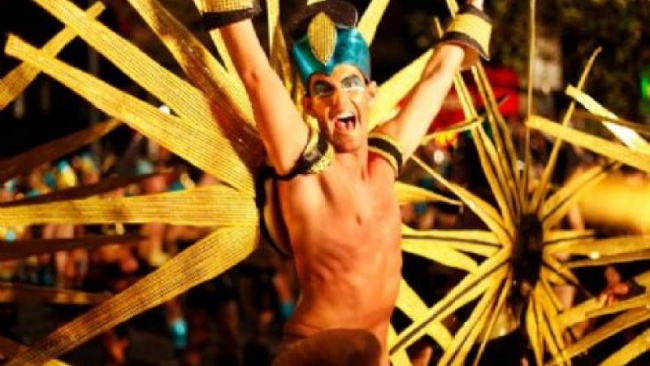 No matter how you want to experience Mardi Gras, I’d definitely suggest you show up for the Parade which starts in Hyde Park and has its way with the city down Oxford Street and Flinders Street by way of Taylor Square (a good spot for people-watching) ending in Moore Park. They have their own version of “Dykes on Bikes,” a tradition with started at the San Francisco Lesbian & Gay Parade. But, for those who’ve experienced the San Francisco Parade, there’s really little comparison between these two. San Francisco may have the heart and maybe has bigger crowds, but Sydney knows how to throw a fabulous pageant with more glitter and glamour than you’ve seen on a fawning starlet. Plus, this is a nighttime processing unlike most of the gay parades throughout the rest of the world so people come ready to party for the 7:45 pm start time.

There are enough over-the-top floats, sexy dancing groups, and skimpy costumes that you might think you’ve landed in another southern hemisphere city by the ocean, Rio during Carnival. But, what’s fun is the audience is full of people decked out in their finest wacky wardrobes. This is a participative event. You may think you’re a spectator, but the truth is people are gazing at you as well. So, I highly recommend you pack up your boa, your gawdy jewels, and some air-conditioned underwear and just know that your friends back home won’t likely see you here. Sort of a Vegas kind of thing: what happens at Sydney Mardi Gras stays at Mardi Gras.

Final advice: Stake out a place on the street two or three hours early (find a milk crate if you can, or 24-inch heels) so you can get a good view of the Parade, but just know that, at some point, you’re going to want to de-camp (an interesting word for a gay event) and follow the Parade to the Fox Studios in Moore Park where the all-night dancing is held. Consider going to the official morning-after party at Luna Park. And, if the crowds feel too much for you, buy a ticket for the Glamstands which gives you a place to sit in an elevated spot where you can take in all the festivities without some stepping on your foot or spilling Foster’s Ale on you.