On the inevitable path to self-discovery that festivals set us on, there are creative markers along the way that simultaneously remind us where we are headed and where we’re from. Sometimes these markers assume a form found in nature. Other times, they take on a human shape in our peers, mentors and teachers. Regardless of physical form, these signposts along the roadway of destiny spur passersby – regardless of age, background, or personality – to stop and think. Whether accompanied by music or not, large-scale art at festivals often serves as a signpost that imparts the feeling that we’re not in Kansas anymore. 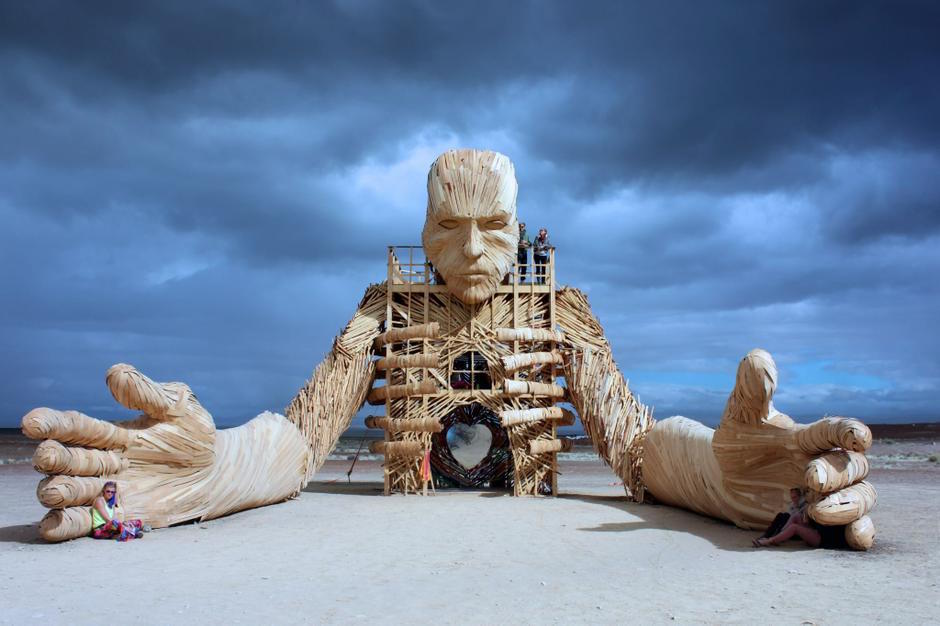 The creative wizards and installation artists who are the masterminds behind that huge art seem to share the understanding that awe knows no one single language or culture – it is universal. Daniel Popper is one such artist who is both fluent in the tongue of Oz and has an important message about the weight festivals place on music lineups, while all too often undervaluing the contributions of the visual artists that put the icing on the cake of festival experiences. From AfrikaBurn to Electric Forest to Lightning in a Bottle to Portugal's Boom and beyond, this South African has toured the world’s most incredible festivals building colossal sculptures where spirits are brought to life from found flora in a seamless blending of mysticism and nature.

Following Boom Festival this year, we sat down with Popper to learn about his Shaman sculpture at the event and he shared the story of his rise to acclaim among other artists. He talked about the importance of friendships in the festival community and spoke candidly on his hopes for the future of big art at festivals.

Rising to the Occasion

When we asked about the first sculpture Popper built at a festival, I half expected he’d talk about his years of experience honing his skills before taking them to festival grounds. Or perhaps, how he’d experimented with art from an early age. His answer was neither. Instead he talked about recognizing the power in his first festival experience at AfrikaBurn and his subsequent build at Boom Festival. “In 2012 they commissioned me to make those giant serpents above the dance floor without having seen or ever done anything like that before. Like, there was no history of my work that could instill some confidence [that] I was the right guy for the job. I had never done anything like it and they just trusted me.”

He didn’t squander the opportunity, either. Popper did his homework and enlisted the help of his friends so that when Carey Thompson, the Art Director at Boom, called and asked "Can you do this?" he inspired confidence with a steadfast “Yes.” 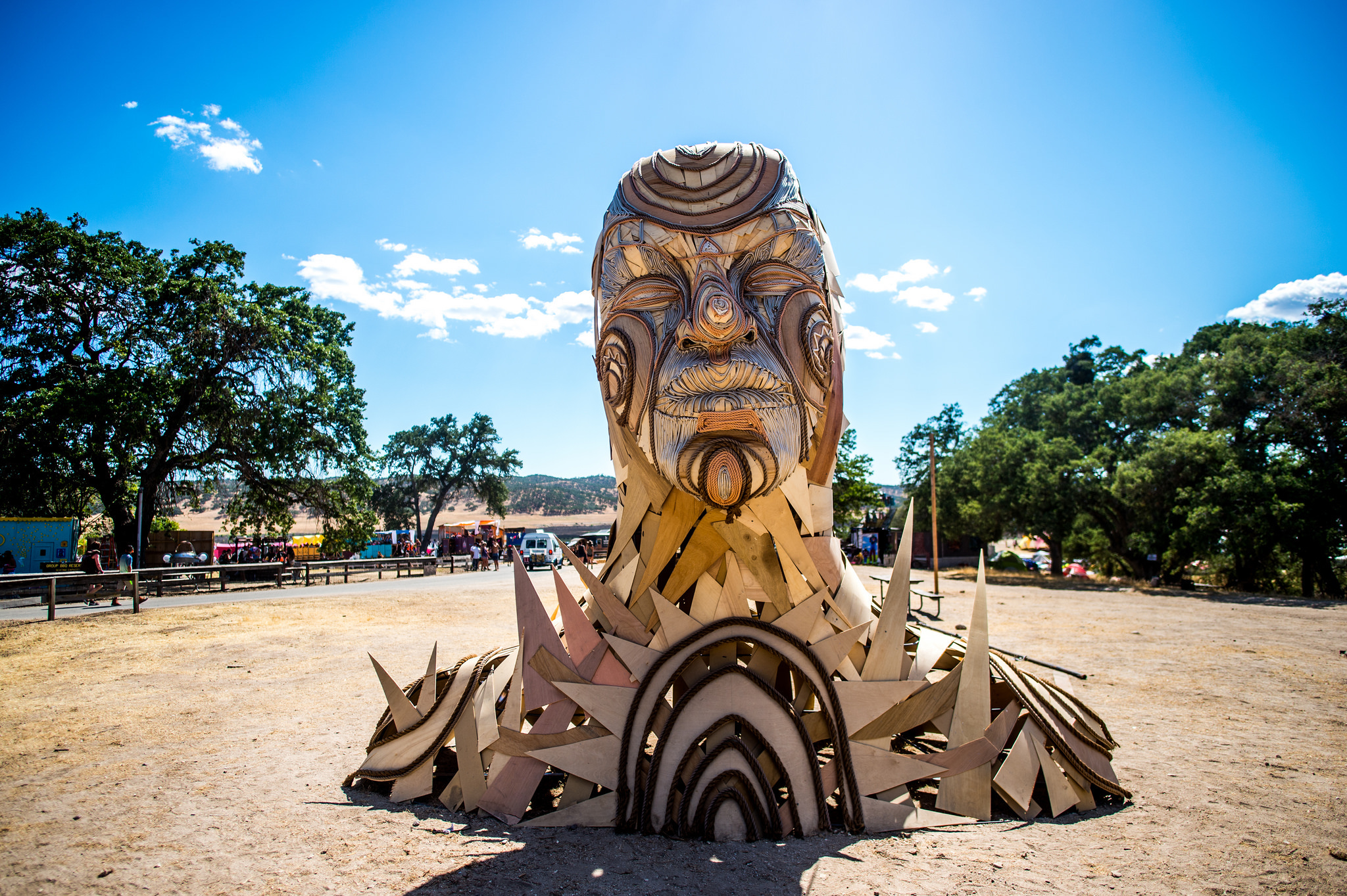 “They were like, 'Okay come do it.'… None of us knew what was going to happen," Popper explained. "We were like, 'Oh shit,' and it just worked out amazingly well.”

Where others may have thought it impossible with no experience or related skills, Popper seized the chance and established his standing as an artist by succeeding in the big art scene through sheer teamwork, tenacity and will.

It’s Got To Be Fun 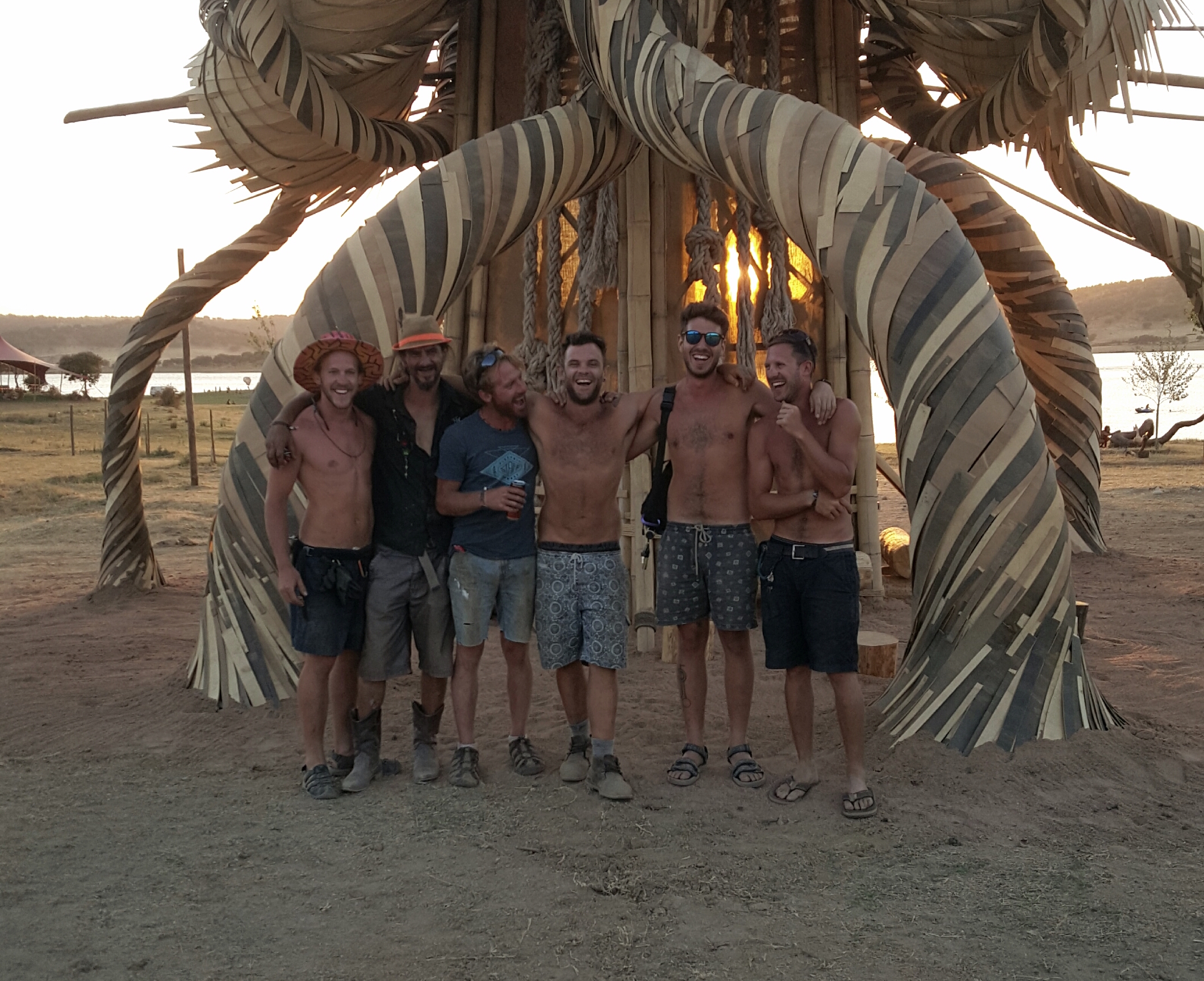 One of the daunting parts of big art is the amount of time that goes into planning and building. It’s also one thing to prepare a sculpture for display, but it’s quite another to make it ready for people to touch, climb or explore. Whether it’s a Shaman at Boom Festival or a Maiden at Lightning in a Bottle, Popper continues to take on bigger challenges at events with fiercely fascinating results.

“The biggest lesson I’ve learned is to work with your friends, because it makes the experience so much more enriching," said Popper. "And it's got to be fun, otherwise you’re doing it wrong. Because I've done festivals and stressed out and that was no fun at all, due to a number of a reasons, like the organization don’t get along with festival organizers, fights with the site managers or whatever...But if you’re with your friends, none of that stuff matters in the end.” 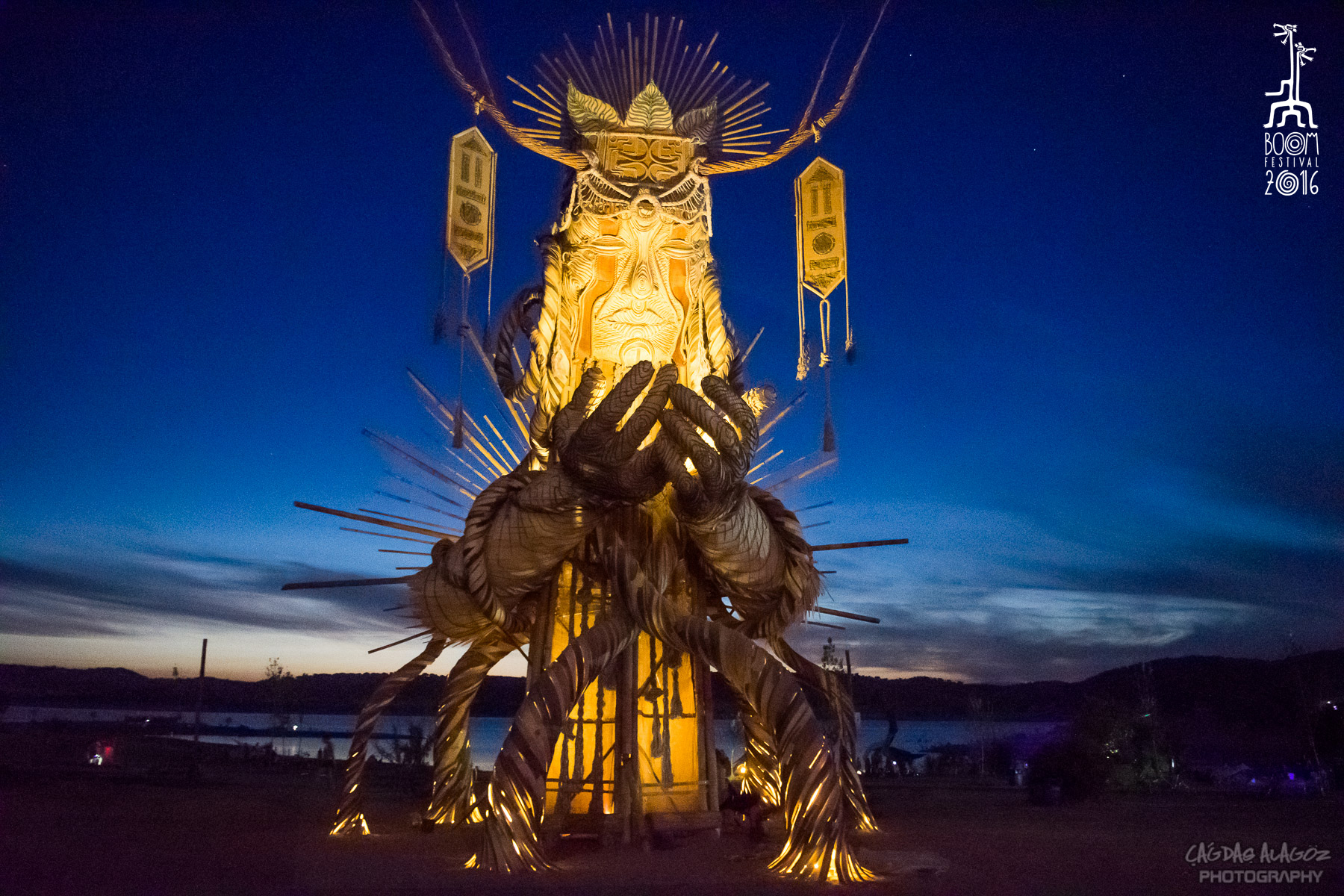 He paused and seemed to breathe in a moment of nostalgia from some time ago before clearing his throat to touch on the participant's experience. “It's the small intimate moments that you share with your close friends that are the most important. You can literally go to the smallest festival that’s got the lowest budget in the world that’s, you know.... got hardly anything. But where they’re curating that experience, you’ll have these incredible moments around the best art.”

Popper’s unique perspective centers art – and the aforementioned “intimate moments” it triggers – as key to community, even suggesting it has just as much importance in the festival experience as the lineup. With this refreshing outlook, his appreciation for the African tribal influences has grown as he’s introduced more of these creative elements in his work at festivals.

“It's made me access a very deep part of myself," he said. "It’s made me dive inwards and feel something extremely intense and powerful and a connection to whatever it is. It’s something important, and if I could inspire that same connection in other people, like enabling them the opportunity to access something deeper within themselves through interacting with my work, that would be awesome.”

How to Change the Industry 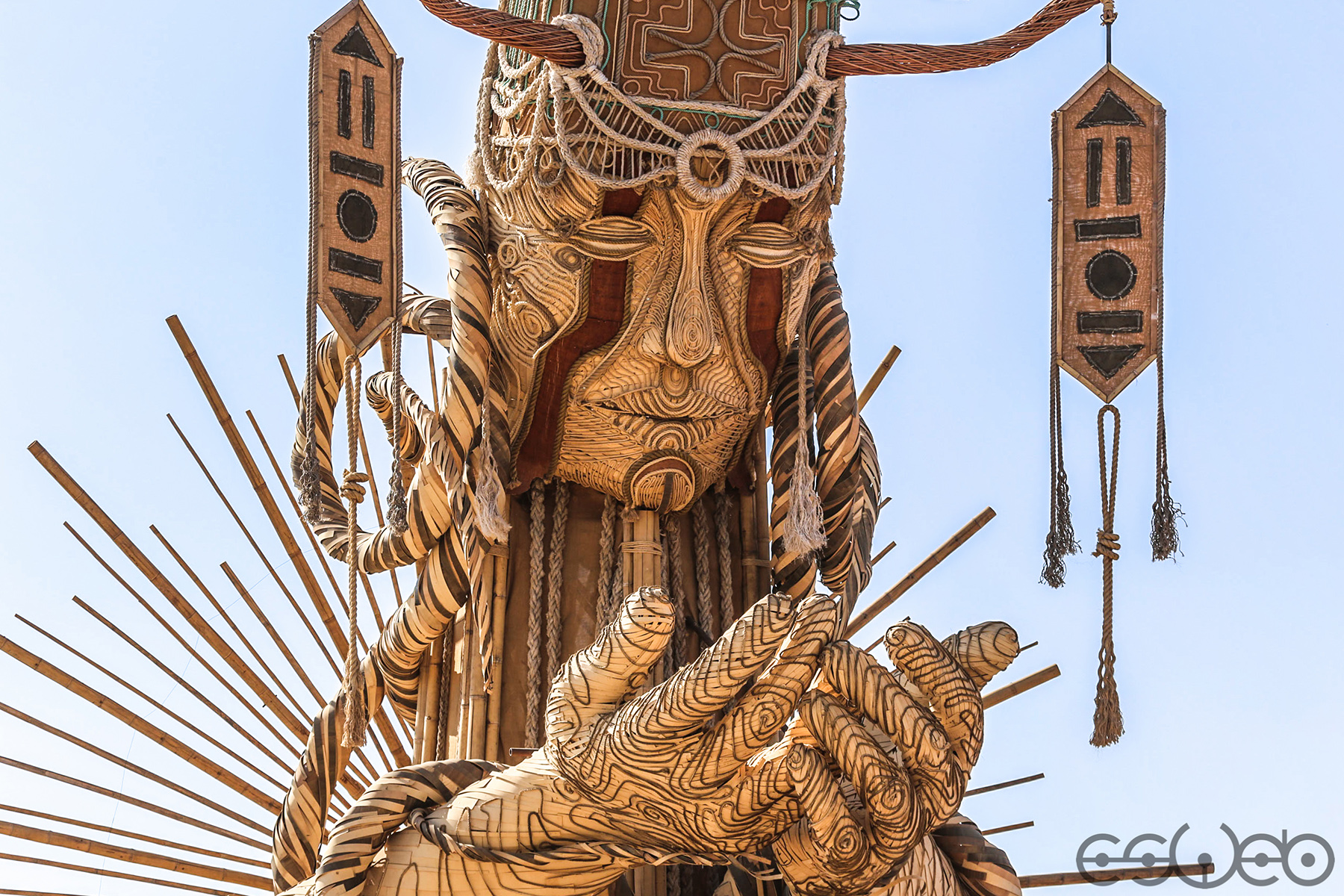 A close-up of Daniel's Boom Shaman from 2016. Photo by: Boom Festival

What’s key about Popper's work is that while big art is important for rich individual experiences, it’s also a marker along the path of a developing industry. One that Popper explains is a change that the industry needs to make to achieve balance. “There really needs to be some kind of universal consensus to stop paying these DJs such extraordinary amounts.” He said. “$350,000 to show up and play for two hours, is not okay, you know? It’s only 'okay' because festivals are agreeing.”

He championed the examples of Boom, Lightning in a Bottle, Rainbow Serpent and Fusion who don’t agree with this status quo. “I’m not invited if I come with that bullshit,” he said.

Even without disproportionate budgets for a blockbusting headliner, many of these festivals still manage to assemble stacked lineups full of heavy hitters. Perhaps that’s proof that,even among musicians, there is a developing understanding that exorbitant fees aren’t in alignment with the shared goals of the artist community. 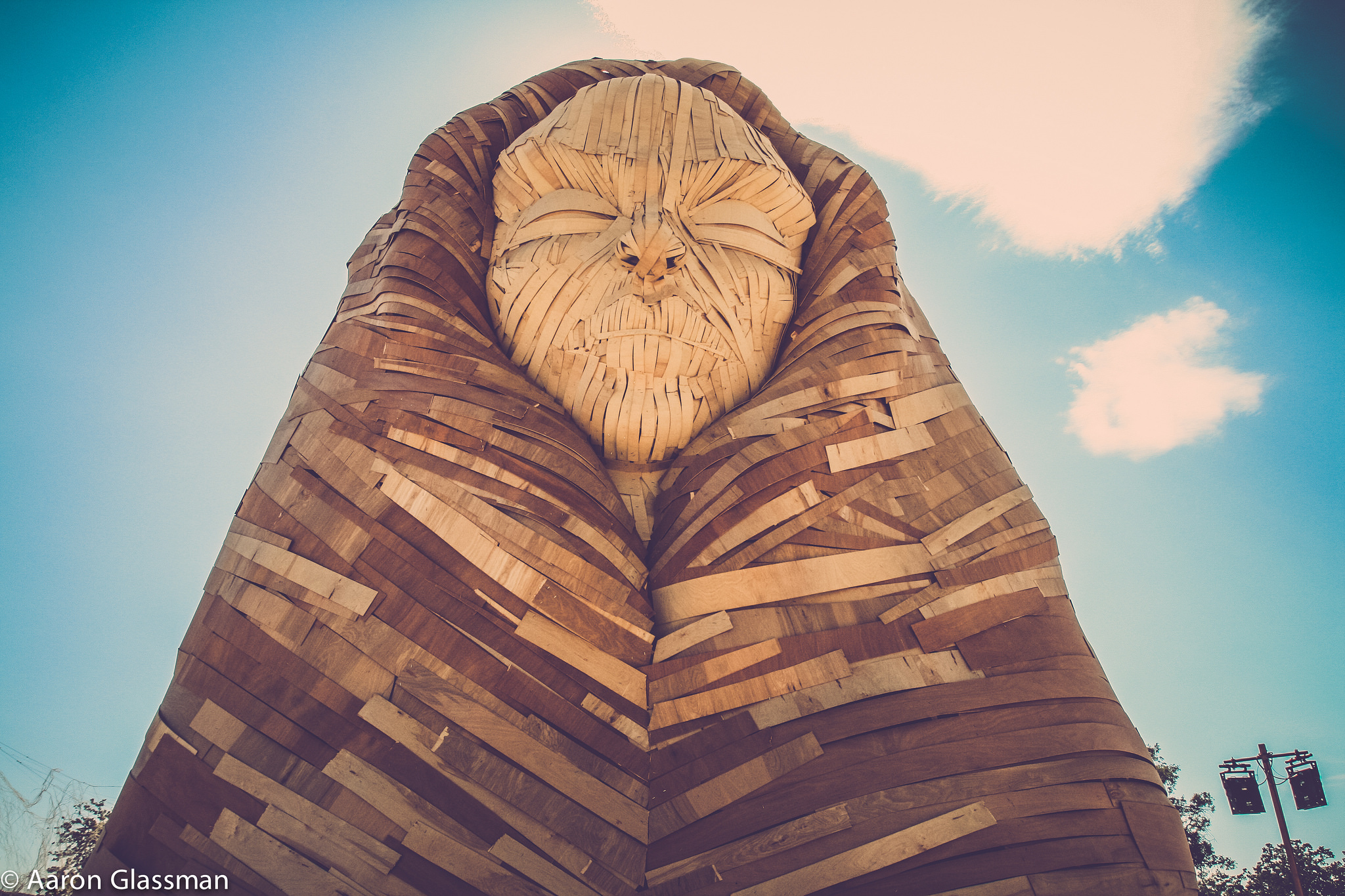 A sculpture at Lightning In a Bottle in 2015. Photo by: Aaron Glassman

“There’s more of socialist ethos at festivals like that,” Popper explained. “Festivals like Boom, they won’t agree. They’re like, 'Why should we pay this DJ 50,000 Euros to play for two hours but this installation artist gets 2,000 Euros to be onsite for like, a month working his ass off?' They know that that’s not right.”

To achieve homeostasis between art and music, Popper suggested promoting artists with the same vigor as they do musicians. Noting that even in published photos it’s customary to credit the photographer but rarely is the sculptor mentioned. "There are already festivals that are leading by example,” said Popper. “And people are starting to look and realize that it’s a much more sustainable model.”

Too often these artists are the unsung heroes of the festival world, but they pour as much blood, sweat and tears into the experience as the actual crew in most cases. While it’s true that more attention on the artist lineup may be needed at large we can be grateful that through the work of folks like Daniel Popper some festivals are demonstrating the difference big art makes on an individuals' experiences and, perhaps more importantly, some more mainstream events are being prodded to rethink how art colors the canvas of the festival landscape to make it come alive.