Festivals are like sports teams; they always need a strong leader. In this sense Glastonbury’s founder, Michael Eavis, is arguably the greatest capitán of them all; cut him open and he’ll bleed rainbows and sweet British mud.

Since starting Glastonbury in 1970 – then called the Pilton Pop, Folk and Blues Festival with Marc Bolan headlining and a £1 entrance fee – it’s grown into a juggernaut that is, with a nod to our Burner friends at Black Rock City, the most culturally significant festival in the world. It’s all a far cry from those early days: Eavis decided to start Glastonbury after attending the Bath Blues Festival of Blues and Progressive Music in 1969, and being inspired by the talent and togetherness on display.

In 2017 it drew over 200,000 attendees, many of whom were there to watch headline performances from Radiohead, Foo Fighters and Ed Sheeran. But many wouldn’t have seen hide-nor-hair of the infamous Pyramid Stage because Eavis’ biggest achievement is not only staging a music festival for the world’s biggest acts, but creating a sprawling temporary utopia where diversity is king and queen. At Glastonbury, within reason, you can honestly behave how you wish so long as you’re fundamentally kind and not doing a disservice to anyone except perhaps yourself and your liver.

“We’ve managed to create [a festival where almost] 200,000 people all get on with each other – you know, all mixed races, all mixed-sex,” Eavis said in a 2015 interview. “There is no nastiness anywhere. None. Isn’t that extraordinary?”

Equally as extraordinary is the fact that this Valhalla of weirdness, queerness and normalized hedonism is curated by a man who never takes drugs and disapproves of drinking. "Terrible drug, alcohol,” he told The Guardian in 2013. “The Muslims got it right on that, actually. If you've got responsibility, you shouldn't drink.” Furthermore, he was raised as a Methodist and still regularly attends church, although he doesn’t quantify himself as religious in the traditional sense. 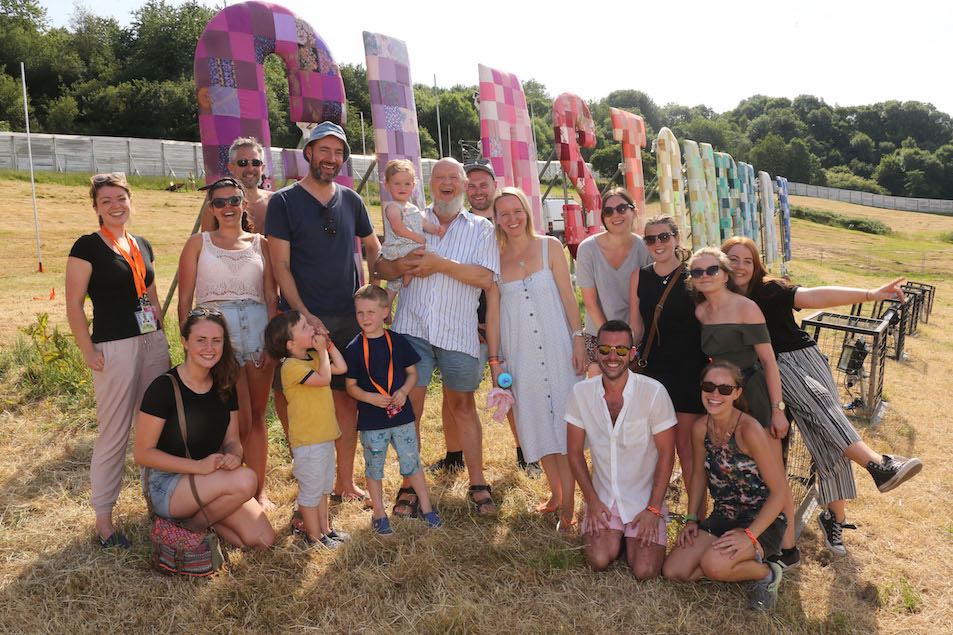 Michael Eavis, center, and his family. Photo by: Jason Bryant

“I just sing hymns,” he told High Profiles . “I love the hymns! And the romantic idea of there being a Creator, a God, that created all of these lovely things – children and falling in love and all that whole thing – and caring about people and showing that care in a very real way so that my upbringing makes a difference to what I do every day.”

This upbringing might explain his famously philanthropic outlook; Glastonbury is a not-for-profit organization that donates £2 million a year to charities including Greenpeace, Oxfam, WaterAid and a number of local charities.

He’s not shy of helping people through political means either; standing as a parliamentary candidate for the left-wing Labour party in 1997, polling 10,024 though not getting elected.

He also has a habit of booking speakers and politicians who preach and share similar altruistic values; before his death in 2014 the legendary democratic socialist MP Tony Benn regularly riled up the hippies on the festival’s Left Field stage. The Dalai Lama showed up in 2015 and this year saw perhaps Eavis’ boldest political move yet, with Labour party leader Jeremy Corbyn given an afternoon slot on the Pyramid Stage. It was a masterstroke with Corbyn pulling in a crowd that, according to reports, compared in size to the famously gargantuan gatherings for The Rolling Stones in 2013 and Dolly Parton in 2014. For the rest of the weekend, chants of "Oh, Jeremy Corbyn" (sung to the melody of the White Stripes' "Seven Nation Army") could be heard ringing from hoarse throats across the campsite, and it felt like a mobilizing moment for the country’s disenfranchised and frankly p*ssed off left-wing. 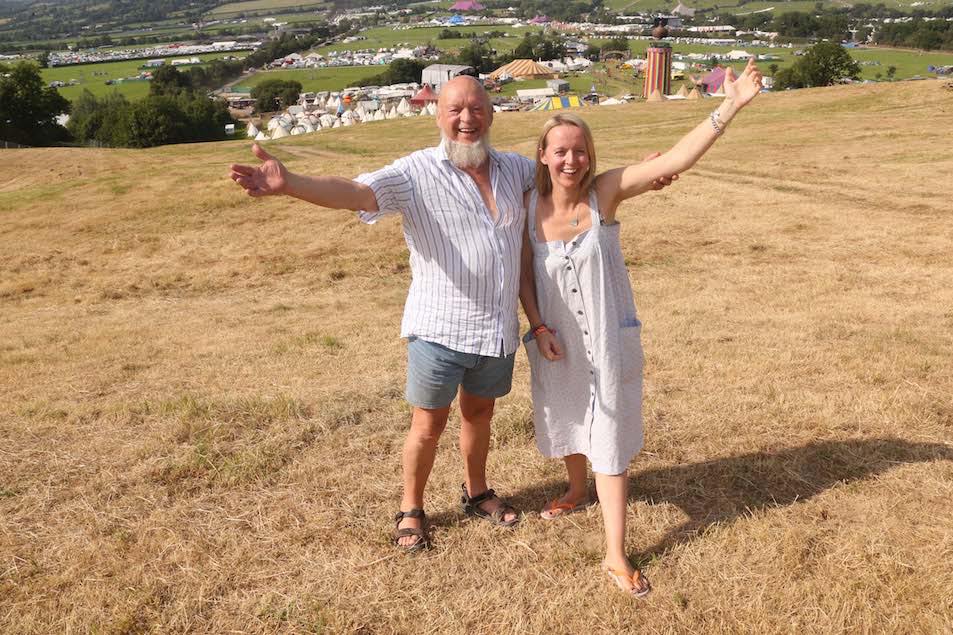 Michael Eavis and his daughter Emily. Photo by: Jason Bryant

It’s not all him, though. He's groomed his daughter Emily Eavis, who is increasingly the public voice of the festival, drip-feeding lineup reveals through her Twitter account. When Glastonbury won last year’s best festival award at the NME awards (again) she was there and this sense of her carrying Glastonbury’s torch makes the future of the event feel secure. Regardless, her dad is definitely its Godfather and the most popular man onsite every Glastonbury weekend, even at the tender age of 81.

Of course, what most people don’t consider is that for 365 days of the year Glastonbury is a working dairy farm with 400 cows that need milking twice a day. During the first Glastonbury, revelers each got a pint of milk from the farm for free. So many decades later, it's still delivered direct to people's tents at a cost of £1.20 a pint. According to BBC, much of the milk comes from the Eavis's own cows, providing a link between the festival and Worthy Farm's real business. Michael Eavis is still involved in the day-to-day machinations of this and the cows would probably say he’s their Godfather as well. Perhaps surprisingly he’s also said that if he had to choose between the farm and the festival, the festival would go the way of Theresa May’s approval ratings. “Being a farmer is more authentic than organising Glastonbury,” he said in a 2013 interview. “You’re rearing cattle, you're feeding people. There's no branding, no sales pitch, it's just a natural way of living.”

It wasn’t always meant to be like this, though. As a young man Eavis wanted to be in the navy and started pursuing his dream on the waves; sadly, when he was 19 his dad died and he was called back to work on the farm. To keep the farm going he had to spend two years working down the coalmines whilst milking the cows at night. It was a down-to-earth grounding for this heroic British kook who is the antithesis of the flashy, egocentric festival promoter. It also helps explain his relentless work ethic, a work ethic that has seen the Glastonbury team now begin on a second festival, The Variety Bazaar , that's tentatively planned for 2021 and which Eavis has described as the “the last big gamble” of his life. It’s a brave decision, but then that’s a hallmark of all the best leaders: standing still is not an option and sleep is for the feeble, especially when the cows need milking at dawn.