As chaotic and alcohol-inspired Fiesta de San Fermin is, the locals run their parties like the Swiss run their watches. The July 6 opening festivities begin with a noon fireworks ceremony, “chupinazo,” and then generations of families set up tables in streets and parks for afternoon-long picnics that merge into drinking and dinnertime that blossoms into all-night dancing.

It’s on July 7 that the daily ritual (or grind based upon your sleep intake) commences, starting with loud brass bands marching through town to wake everyone up. The drink of choice to start the day is carajillo, coffee with brandy. 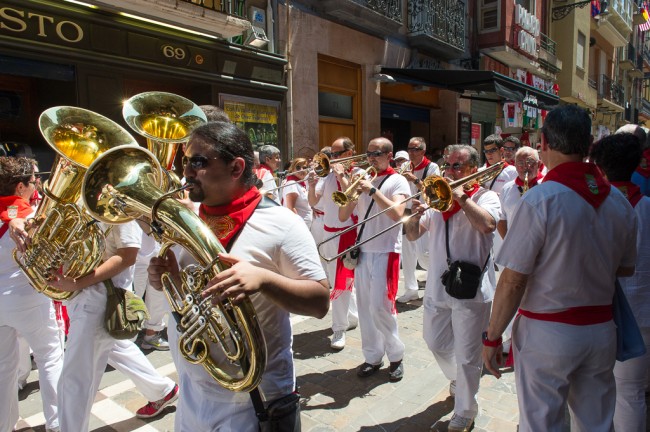 The religious roots of the festival erupt from the revelry on the morning of July 7. While San Fermin is not the official saint of Pamplona, he is the patron saint and this day is dedicated to him. The San Lorenzo chapel guards his relics and his image is taken out in a procession on the 7th, followed by a midday feast to celebrate his life. Another opportunity to drink.

In The Sun Also Rises, Hemingway wrote, “The fiesta was really started. It kept up day and night for seven days. The dancing kept up, the drinking kept up, the noise went on. The things that happened could only have happened during a fiesta. Everything became quite unreal finally and it seemed as though nothing could have any consequences during the fiesta. All during the fiesta you had the feeling, even when it was quiet, that you had to shout any remark to make it heard. It was the same feeling about any action. It was a fiesta and it went on for seven days.” Sounds a little like our modern day Vegas: “What happens here stays here.”

The “encierro,” the Running of the Bulls, is the highlight of the day and, oddly, it starts just as some are ready to go to bed. Hence, the surreal Night of the Living Dead atmosphere of staggering packs of mostly young people. It used to be harsher for those who don’t like to rise early, as the 8 am starting time was put in place in 1974. It was 7 am in 1924, and 6 am prior to that.

The smart, mature people (mostly women) head to a local café or bar to watch the race on television over some coffee or tea. 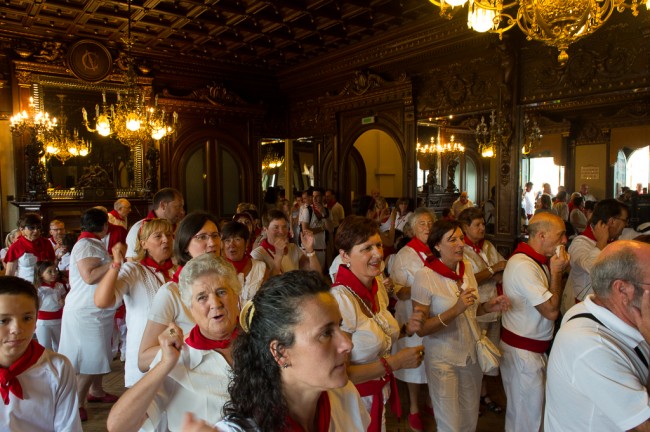 Everyone else, who’s not face-down in a park, meanders over to the route that stretches from the Santo Domingo corrals through a couple of dangerous corners known as “Dead Man’s Curve” (the Ayuntamiento and Mercaderes stretches) to the long alley way of Estafeta, the fastest part of the route, to the final turn at Callejon into the bullring. More than 50 carpenters each day erect and take down the wooden fencing that helps create order in this early morning mania. 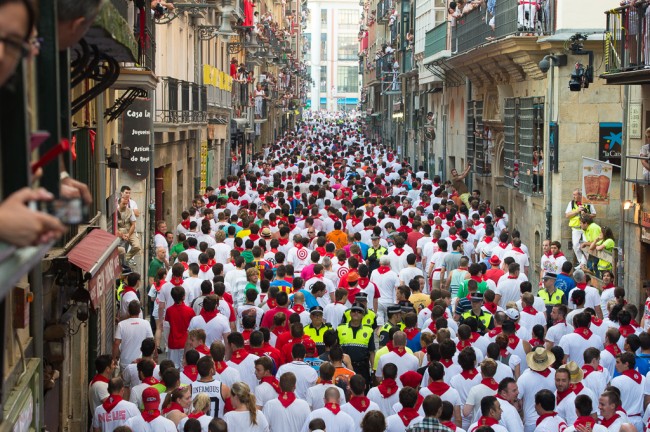 My first morning, I was very fortunate to score a balcony on the Estafeta for free, due to my host Mikel. As this video shows, it’s earily quiet just a few minutes before the bulls are running as street sweepers and the police clean up the route before they allow the runners to fill it up.

Here’s a gratuitous shot of me, looking a little weary from the night before. The t-shirt doesn’t speak to the fact that I left my heart back in San Francisco, but instead is an affirmation of how much people love San Fermin. 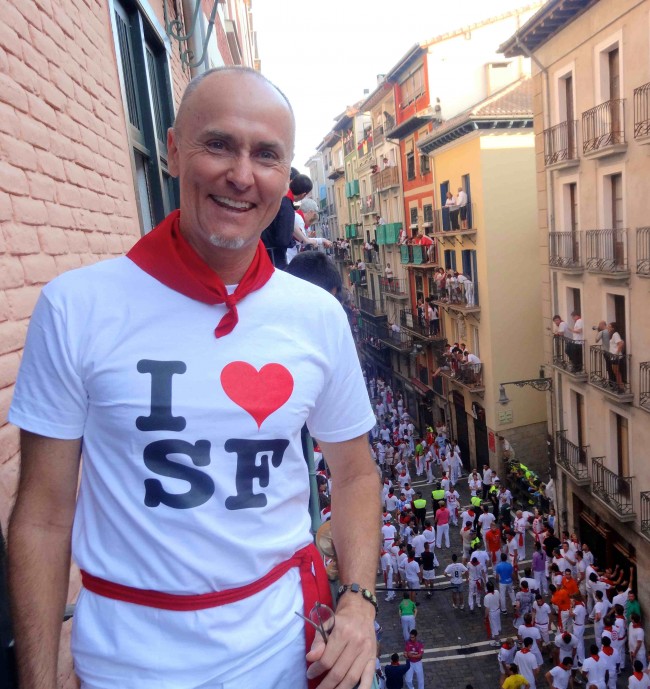 It was entertaining to watch the runners get themselves pumped up, stretching, pep talking each other, and even dressing one another in anticipation of those lumbering beasts coming any minute. 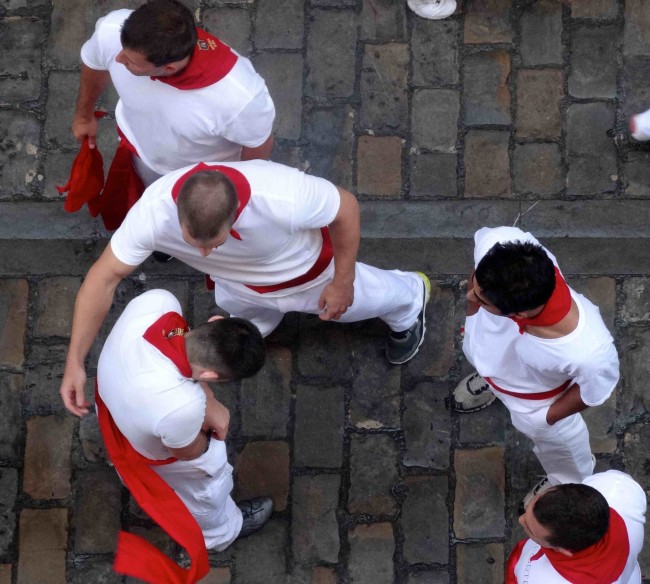 The anticipation is heavy as so many of the runners (95% are men) have this event on their “bucket list,” but suddenly there’s a worry that they might “kick the bucket” this morning. My anxiety started to grow as I knew I was going to be down there on the street tomorrow.

Many gather to sing a prayer for protection to a statue of Saint Fermin as well as a chant in Spanish and Basque, “Long live San Fermin!” The adrenaline is palpable and there’s a strange pleasure that comes from gathering at dawn with thousands of others to witness something so communal and so deeply rooted, but, of course, the bulls – if we interviewed them – would have an entirely different story (read my last blog post if you’d like to explore the ethical controversy about this event).

At 8 am, the first rocket is set off which signals that the bulls are being released from their corrals. A second rocket goes off a few seconds later to signal the six-pack of bulls (and the bell-tinkering steers that guide them) have all left the corral. A third rocket announces all the bulls have made it the half-mile to the bullring and a fourth rocket indicates that the bulls are now safely inside their pens. The action all occurs between rockets two and four.

As you’ll see in this video, there’s an emerging chaos that ensues after rocket two. Some runners just want to hightail it to the bullring, hopefully getting there before the bulls. Others, who were aggressively pushed along in lockstep by the police, start running back up the racecourse so they can meet the bulls and run along side them (not for long, though, as the bulls run about two to three times faster than an athletic human). And, then, there are the guys jumping up and down like they’re on pogo sticks. This is one way to get a vision over the mass of humanity, but it’s also a way to shake up all those butterflies in the stomach,  migrating to the chest.

The whole thing happens very quickly from the first to the fourth rocket and can be over in four minutes. On occasion, things take longer when a bull gets dislodged from his pack and disoriented mayhem can break out when a bull starts running in the wrong direction. The “mozos,” the expert daredevil runners who guide the bulls, do their best to help steer the steer back in the direction of the bullring (these photos were taken with a shakey hand…but my best at capturing the action)… 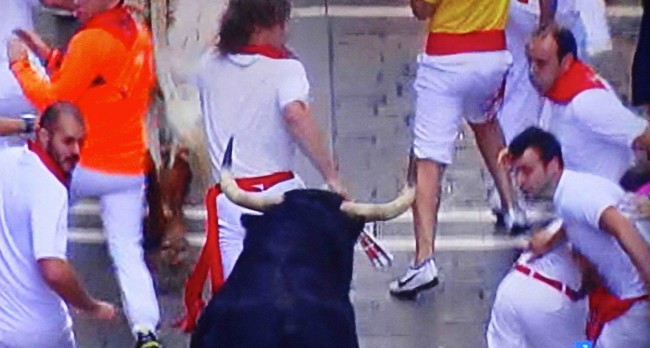 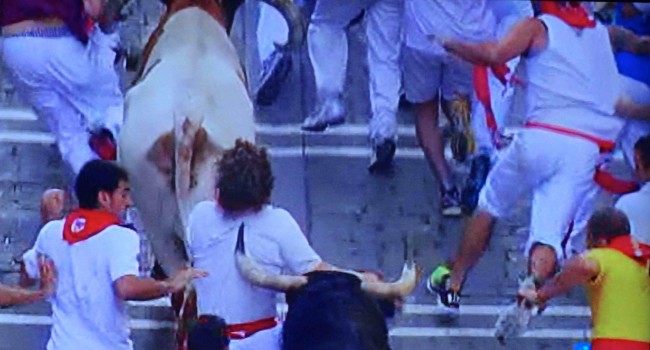 The biggest danger isn’t necessarily the bulls, it’s the pile-ups of human bodies that can happen when you are constantly looking backwards and forwards while running like you’ve seen a ghost. And, the most likely place for a pile-up is the narrow tunnel that takes you into the bullring. As evidenced in this sequence of shots, coming into the bullring is one of the primary places runners can get hurt. 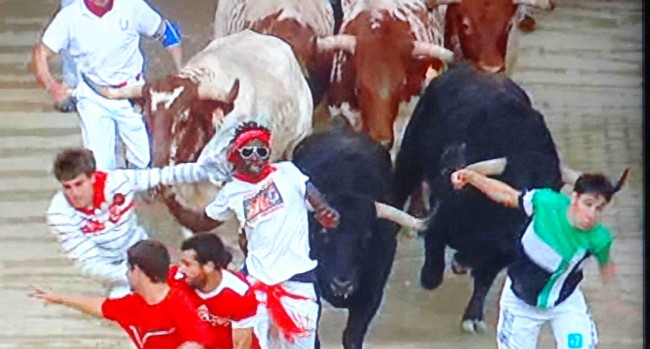 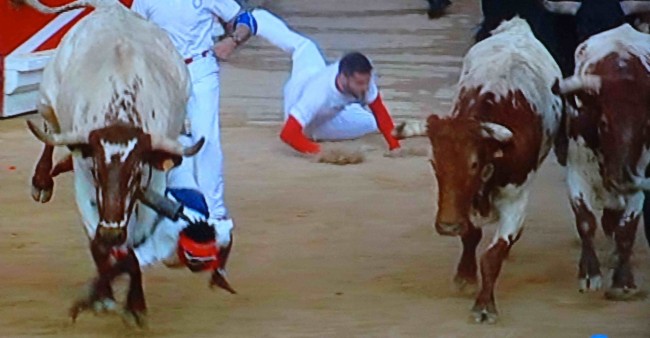 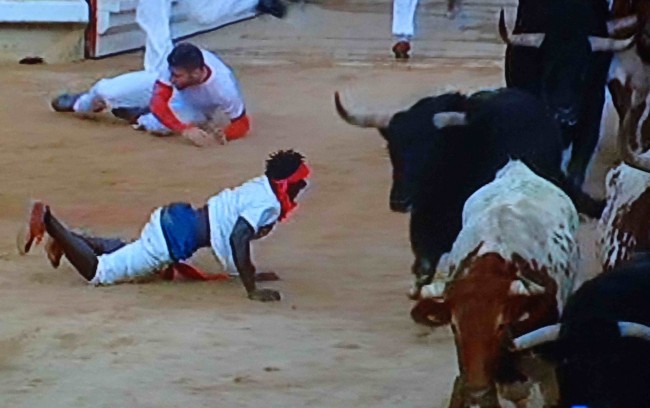 Post-race, a strange psychology starts to develop: what might be called the running of the bullshit. People are relieved and there’s a storytelling element that beats anything you’ve experienced since childhood or a fishing trip. It’s not that people are necessarily lying, but it’s almost like the physical competition associated with racing to the finish has been upended by a social competition of who has the best story.

And, quickly, that competition is replaced by who can drink the most. It may start innocently at lingering lunches in plazas or in dancing in various afternoon clubs. 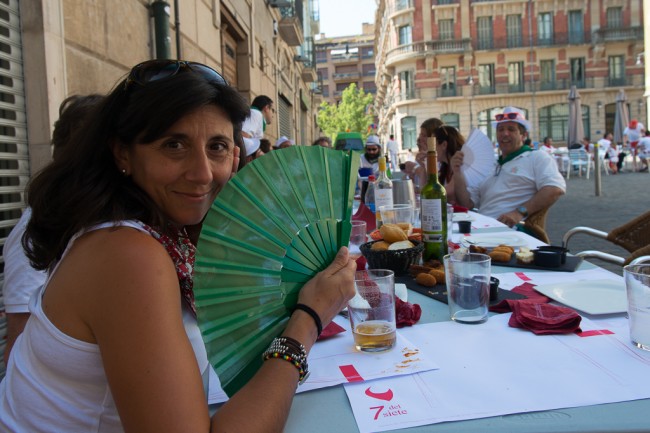 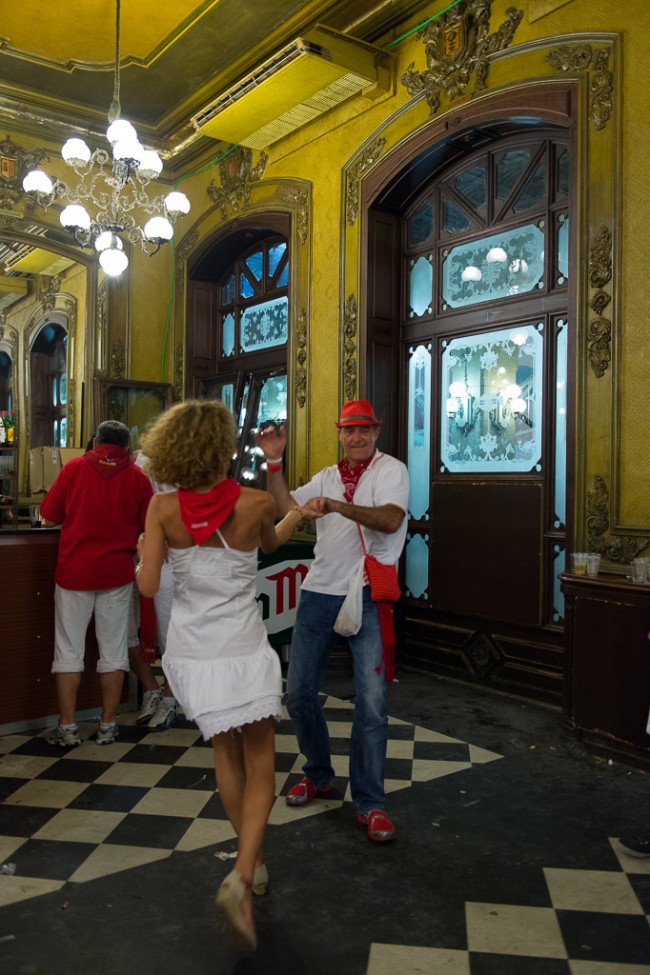 But, quickly it devolves into roaming packs of drinkers for hours on end. 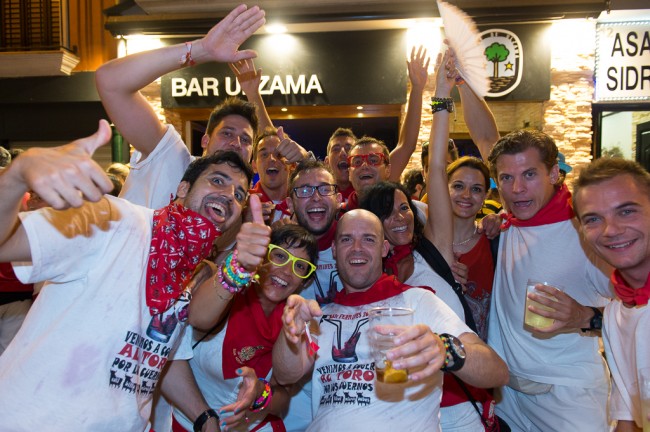 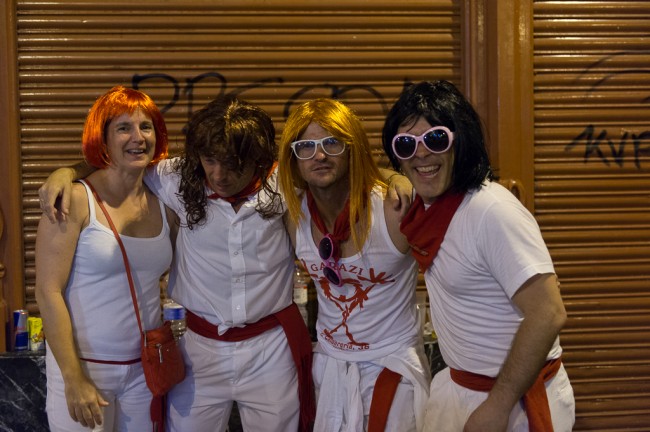 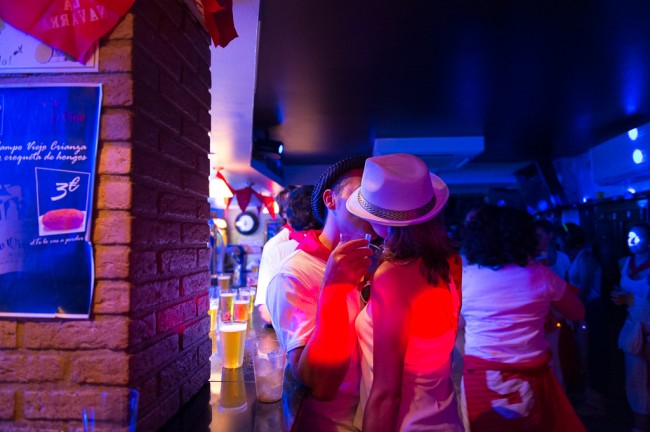 The fireworks at Parque de las Ciudadela, fifteen hours after the rockets that start the run at 8 am, are a reminder to the inebriated who’ve lost track of time that there’s a run again in just about eight hours. We get to do this all again! 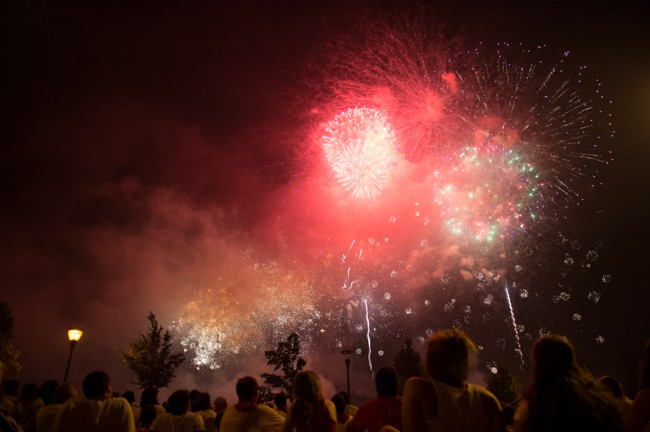 By this time of the night, it feels like the International Hurling Championships (in Ireland each fall) have migrated to Pamplona – with a very different kind of hurling going on. Between the vomit and the urine, you’ll appreciate not wearing open-toe shoes while in Pamplona and you’ll wish that the city hadn’t cut back on their San Fermin municipal spending this year by 14% (due to the ugly Spanish recession), as we could use more of these temporary facilities. 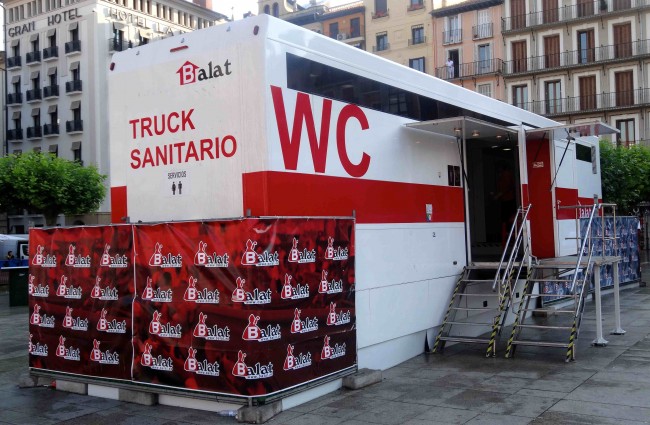 Sleepless in Pamplona. Yes, it’s part of the San Fermin experience, although many people find a few winks wherever they can get them. 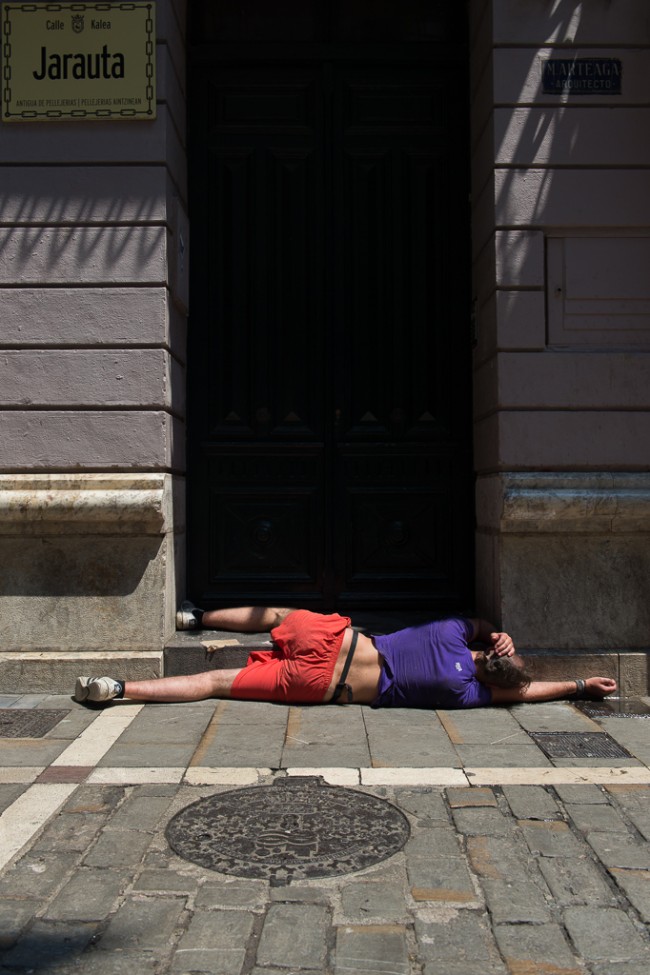 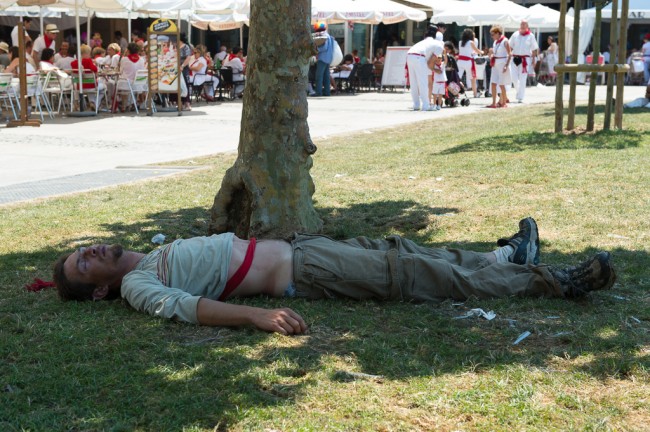 The origin of the French word “debauchery” means “to lure a man away from his purpose.”  If that is true, Pamplona is full of purposeless souls for a little over a week each July. The debauched jump from statues into the arms of the similarly-inebriated. They throw cold water on each other from balconies in the narrow street’s of old town. They are a happy, aimless mob, reveling in the fact that they’ve been granted another day to live…and to drink. 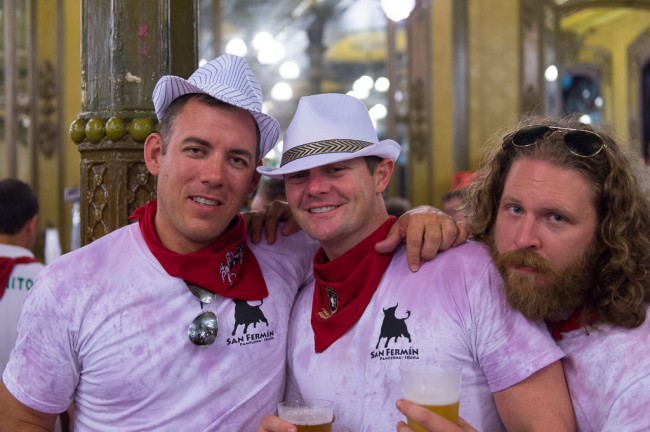