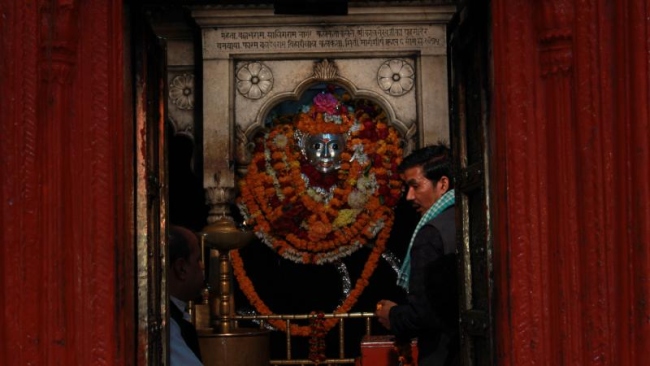 Ask some Americans what comes to mind when they imagine the divine and you may get a sassy answer relating to John Waters’ femme fatale character. Indians’ serious relationship with the divine starts in temples and Varanasi is full of them. I’d highly recommend checking out the Kaalbhairav temple focused on overcoming death (the only temple we found where you can take pictures), the Shaktipeeth temple, the Samakatmochan temple, and the granddaddy of all Varanasi temples, the Kashi Vishwanath temple. Give yourself sufficient time to meditate – if you’re so inclined – at each temple, as it’s quite an experience. 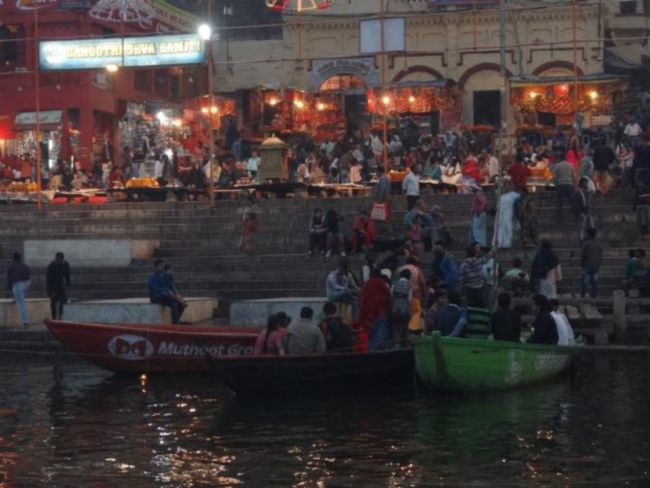 Just behind the Ganges River is the Kashi Vishwanath temple

I highly recommend visiting the Vishwanath temple early in the morning (between 4-6 am is best and you can rent a boat at the nearby Ganges for sunrise) as this is one of 12 Jyotirlinga temples in India and this small temple of light is considered one of the most sacred. If you’re not Indian, you’ll need to bring a passport as the security is very tight here given past bombings at temples. There’s a compound of ancient temples at Vishwanath, each of which is the size of a small bedroom with the traditional linga (male) and yoni (female) symbols on each floor which is where you offer marigolds and milk or water and receive a tika on your forehead at the spot of the sixth chakra. It’s a bit of a frenzy like fish in a pond at feeding time so beware that temple-visiting can be a contact sport. Also recommend buying $5 sandals in town and using them throughout your temple time in Varanasi as you take them off and put them on each time you’re going to a temple and your shoes can get a little trashed given what’s on the ground. 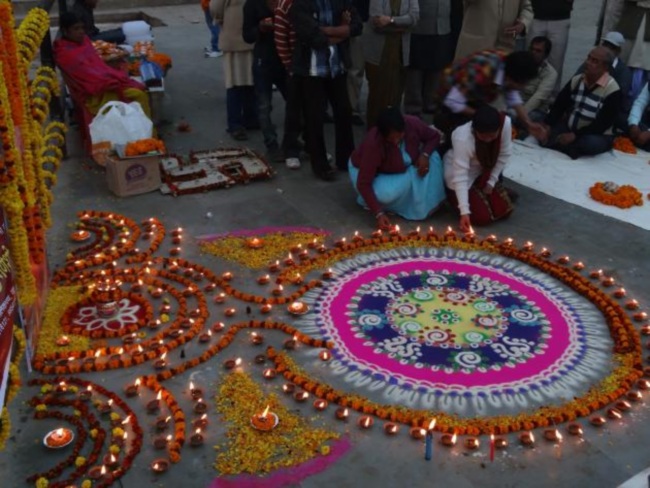 A rangoli is created riverside

While the soul of this city may be its temples, the heart is the Ganges River. Varanasi has seventy ghats (different places where steps allow river entrance) so there’s a permeable relationship between locals and their sacred river. While peak times are early morning and evening – when there are more bathers – a walk along the Ganges is quite an experience any time of day with visiting colorful sadhus (roaming devotees), crumbling and ornate buildings, and eerily small lanes just behind the promenade. 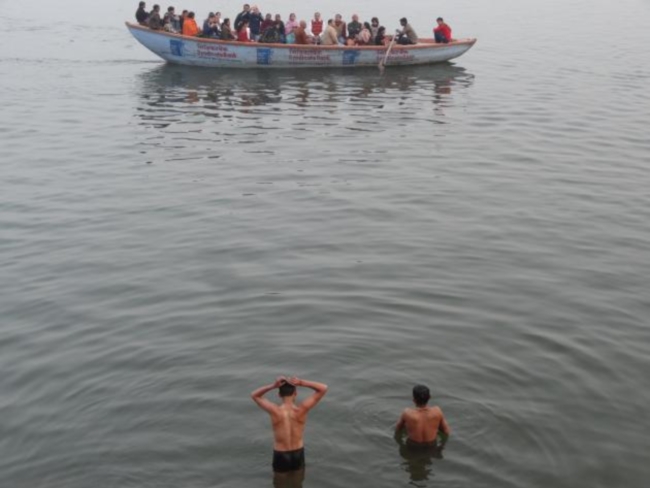 How would you enjoy being photographed while bathing?

The river is a photographer’s paradise. Be thoughtful, though… not just during bathing, women are a little more modest in getting photographed. When in doubt, if you’re close enough to your subject, ask if they’re okay with you capturing the moment. And, especially with kids, show them the digital image you’ve created as a gesture of appreciation. 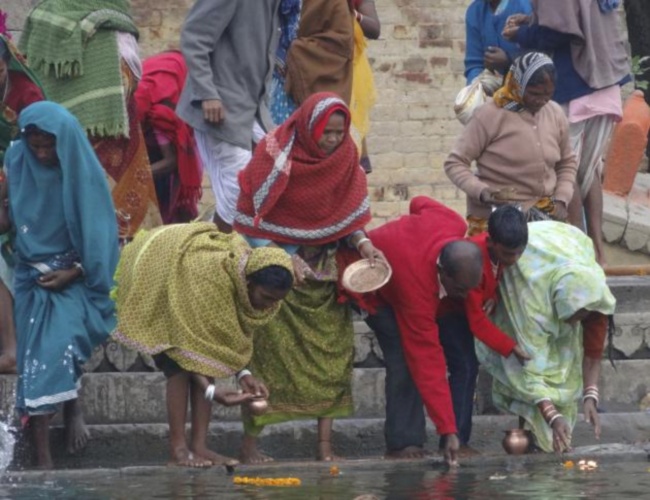 People don’t just bathe in the river; they do their laundry and dishes there as well

The Ganges is so pivotal to the Indians’ devotion. It came up in conversation that the phrase “stream of consciousness” describes when we are most connected to our “higher self”. Spending time on the river, I understand even more why the water metaphor so beautifully conveys this experience.The most stunning moments at the Ganges are at dusk when the aarti, or prayer for the river, occurs. There are a variety of divine rituals performed riverside and, once again, a boat may give you the greatest number of options of what to see. 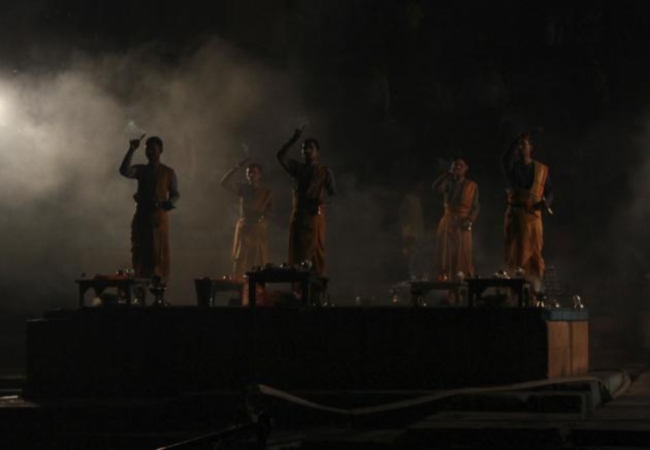 No Bollywood film could truly recreate these atmospherics 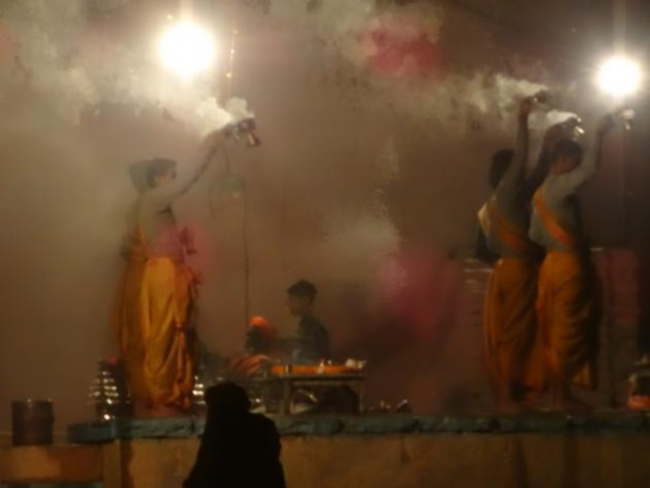 Amidst the Varanasi haze, clear devotion is expressed to the Mother Ganga

And, a trip to the river wouldn’t be complete without experiencing the funeral pyres. Many Hindus believe that cremating the body is the best way to release a soul to the next incarnation and so as many as one hundred bodies are burned riverside daily. This is a place that you can only photograph from afar. 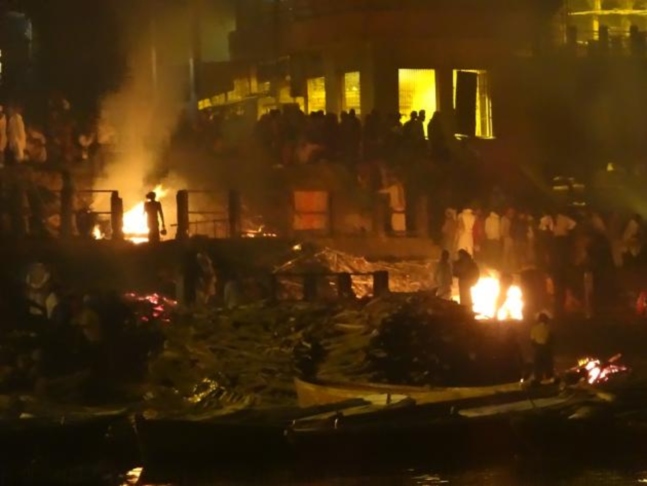 This particular funeral pyre is usually burning 24 hours a day, but others are just in the evening

Varanasi is vivid. It’s a human blender and a soul changer. For me, I’ve never slept as deeply and had as energetic and descriptive dreams. Yet, for so many who visit Varanasi, they come here to wake up not to sleep. 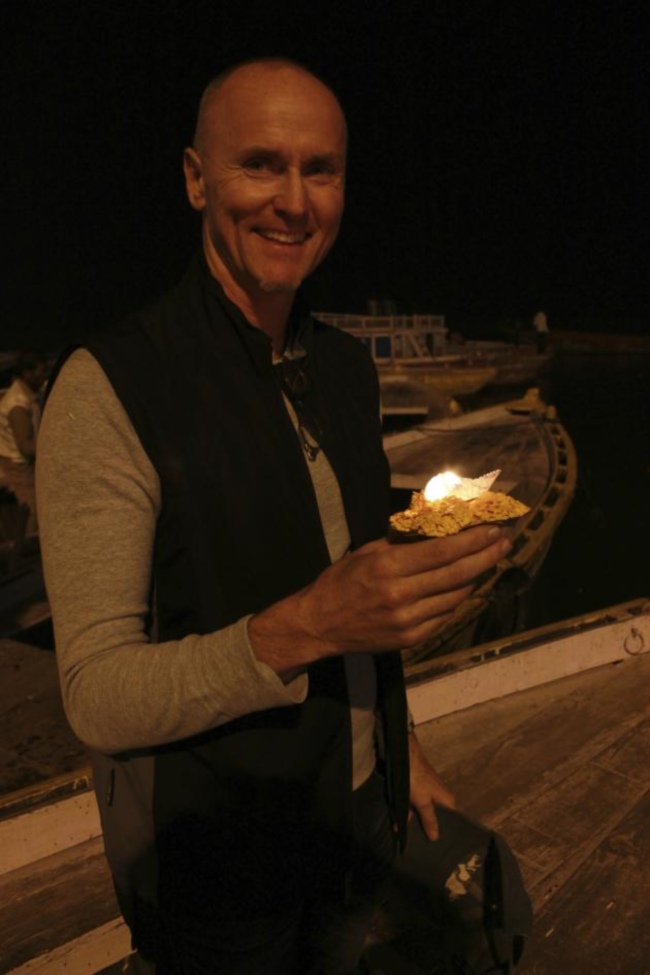 Releasing a deepam, a fire offering with marigolds, to the sacred river