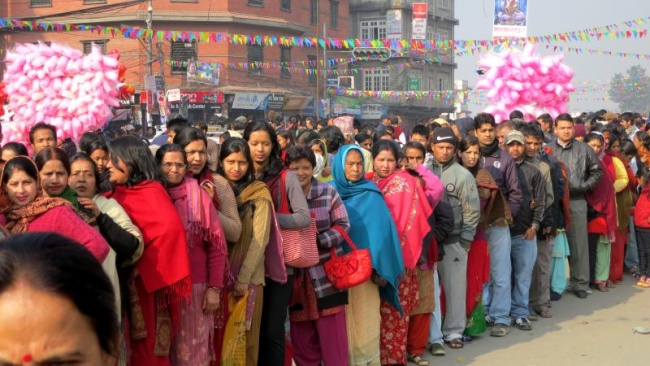 I’m on my way to Kuala Lampur and the Thaipusam festival. When I booked my 5-week Asian festival journey a few months ago, I originally thought I’d be able to visit the Maha Shivarati festival in Kathmandu, Nepal. But, as is true with many of the festivals that are based on the lunar calendar, this festival’s date moves from year-to-year and I wouldn’t be in Asia on March 10 when Shivarati happens this year. But, my good friend and journalist Jeff Finney went to the festival in 2012 and shares his insights and photos in the following guest blog…(all photos are by Jeff)

“Are you here for Shivaratri?” our taxi driver eagerly asked while whisking us through the grimy narrow streets of Kathmandu, capital and largest metropolitan city of Nepal.  While planning the itinerary for my recent South Asia trip, I was pleased to note that there was going to be a religious festival during my stay there. Arriving in a foreign country during a festival is always a travel bonus, akin to being in Rome on Easter Sunday or Mexico City for the celebration of the Virgin of Guadalupe. To an attentive visitor, the rituals of holy days often provide a window into the soul of a people, and make for rich insights into that culture’s foundation. 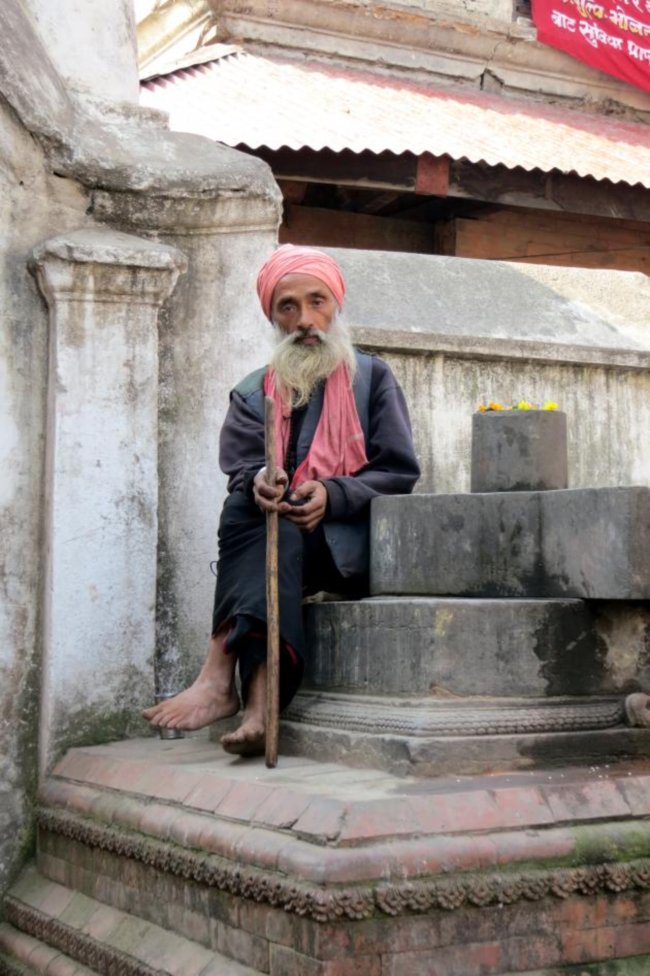 That afternoon at the hotel, relaxing with a cup of herbal tea and a copy of the The Himalayan Times, I read up on the pending festival Shivaratri, or more formally known as Maha Shivaratri.  The article explained that the nearby 2,000 year-old temple Pashupatinath, situated on the bank of the sacred Bagmati River, was one of the most significant Hindu temples of the god Shiva, the third deity in the Hindu trinity and considered the lord of creation, preservation and destruction.  Ardent followers consider it extremely auspicious to worship Lord Shiva on Shivaratri as it is believed that sincere devotion to Shiva and the performance of prescribed penances on that day help the devotee achieve positive karma and spiritual liberation all the more swiftly. 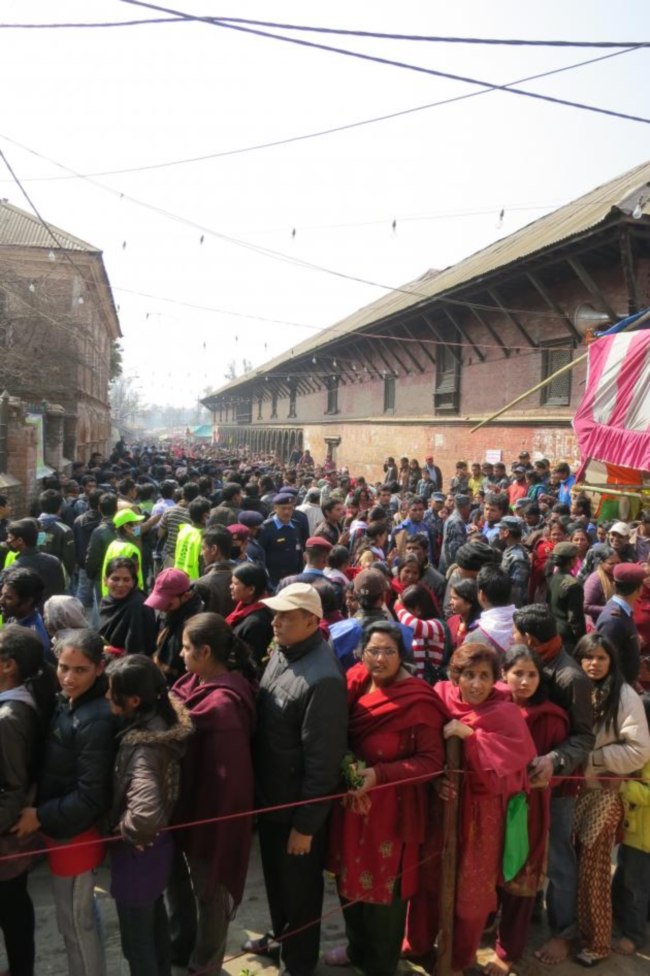 Then, thumbing through the rest of the paper, I came across a small article in the back section that warned of chock–a-block traffic as the festival expected to draw some 800,000 visitors from India and Nepal.  Yikes, I thought, that’s nearly the population of San Francisco – and then my mind wandered to the Burning Man festival in Nevada’s expansive Black Rock Desert where I’d experienced moments of what I would describe as crowd unease – and, Burning Man boasted only 50,000 or so attendees. I asked our guide about how we could possibly negotiate such a crowd, and he answered cheerfully in his British clip that he had “peerless knowledge of the inner workings of Shivaratri ”  I must have appeared doubtful, because he added, “Trust me.” 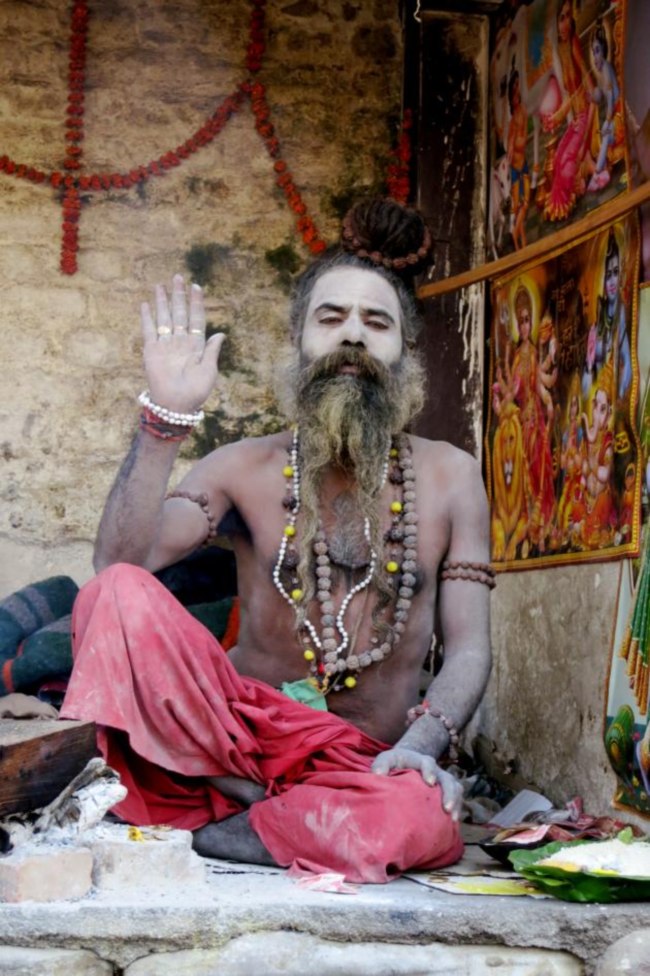 While the gates to the temple grounds reportedly opened at 3:15 a.m., we arrived at the saner hour of 8:00 a.m. and, true to his word, our guide steered us through massive lines (the paper reported the next day that some waited up to 9 solid hours to gain entrance), and a myriad of police manned checkpoints.  The air was thick with oily smoke from the ghee butter votive lamps, flowery incense and accented with the pungent scent of bhang (marijuana and hash) – whose consumption for holy purposes is legal only for the duration of this festival in Nepal. 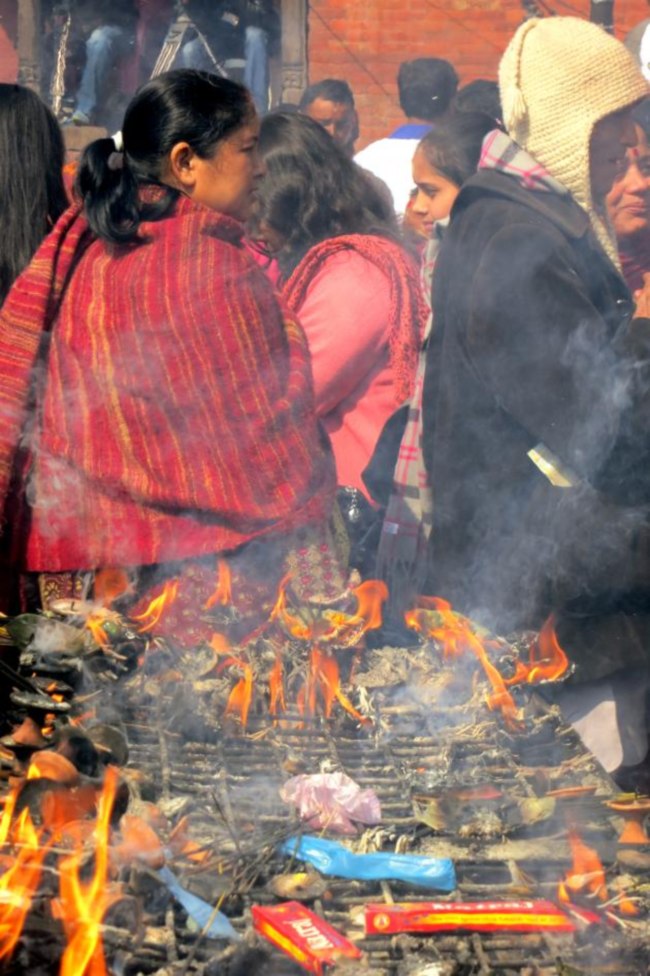 Only believers in Pashupatinath (mainly Hindus) are allowed to enter the actual stone temple.  So we positioned ourselves out of the flow of worshipers but close enough to watch as they presented marigold lei, coconut and other offerings to Shiva and refreshed the many sacred lingam-yoni carved-stone sculptures (symbolizing the male/female creative energies) scattered around the temple with baths of honey, milk and water. 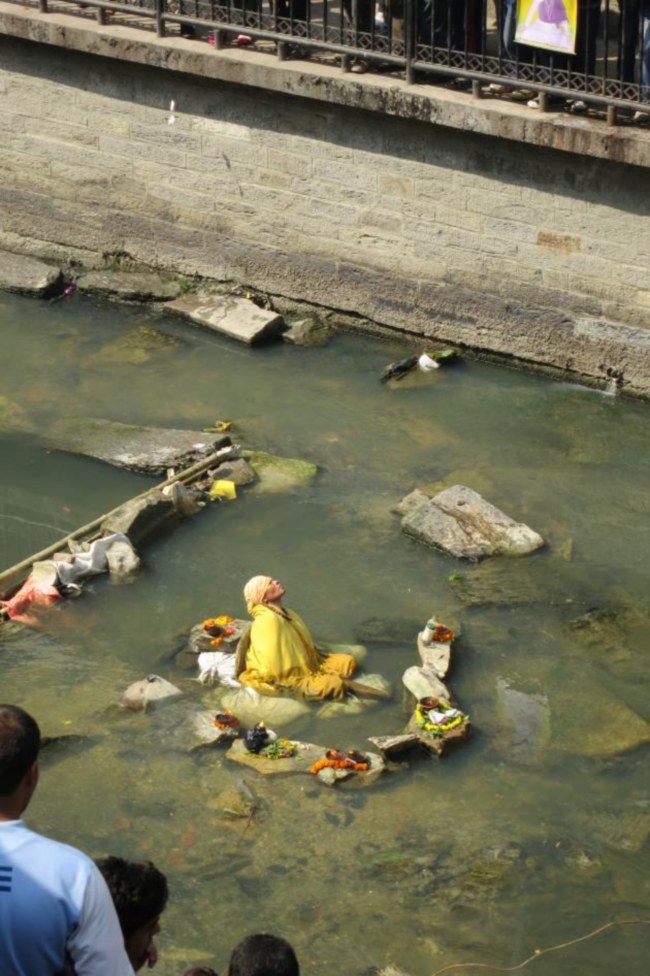 The offerings to these stone sculptures were so numerous that their milky mixture seeped through the cracks of the temple and into the Baghmati River below. A thin white ribbon wound its way through the slow current and past a woman sitting with her back against a large stone in a trance-like state chest high in the water. Our guide told us that she’s been there for two days, praying for world peace. I joined the several hundred others watching and audibly gasped as her body convulsed from what must have been from the cold. Her head momentarily tilted back towards the sunlight, and I could see her face. It was serine, her eyes closed, her jaw firm, and then her body shuddered and her head drooped towards her chest. Offerings of rupee were neatly stacked and anchored by pebbles atop the protruding nearby rocks. A woman, (I was hoping she was a doctor), waded into the river and fished out a couple of errant rupee that must have become dislodged and were floating lazily downstream. I caught sight of our guide who motioned me to come.  In my haste, I nearly ran into a vendor carrying a tall stick festooned with puffy bags of pink cotton candy weaving his way through the crowd. 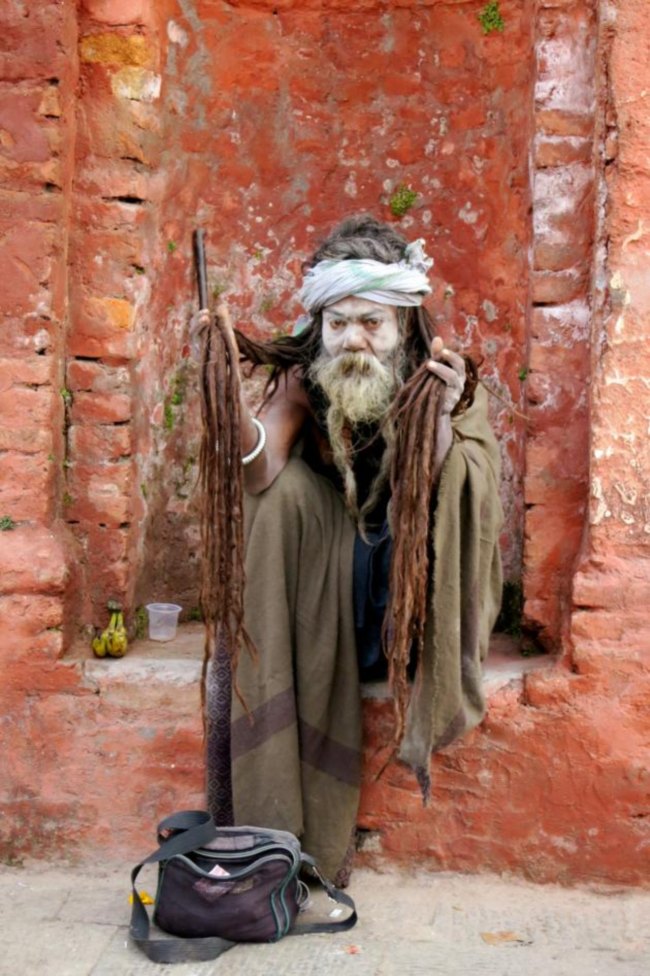 Among the mass of 800,000 Shiva revelers were some 3,500 Sādhus, or wandering monks dressed in ochre and saffron colored robes carrying tridents. Among these colorful groups were some 500 Anaga Babas – holy men who have renounced all material and earthly attachments and accoutrements, including clothing – seemingly intent on warding off the early morning chill by sitting around smoldering fires (surprisingly, the elevation of Kathmandu is only 4,500 ft.)  These holy men having vowed themselves to a life of ascetic yoga and arduous spiritual practice are sustained by generous Hindus, who bring offerings of coins, rice, fruit and sweets as it is believed that such acts generate good karma.  In return, holy men bless their supporters by placing their palms on their heads and chalking a streak of ash on their foreheads.  (I read a festival review later in the paper and learned that some of the Anaga Babas had expressed disappointment about the quality of the wood provided for their morning fires.  Apparently, much of the wood gathered is the remnants of funeral pyres and wet after being submerged with the cremated remains into the Baghmati River). 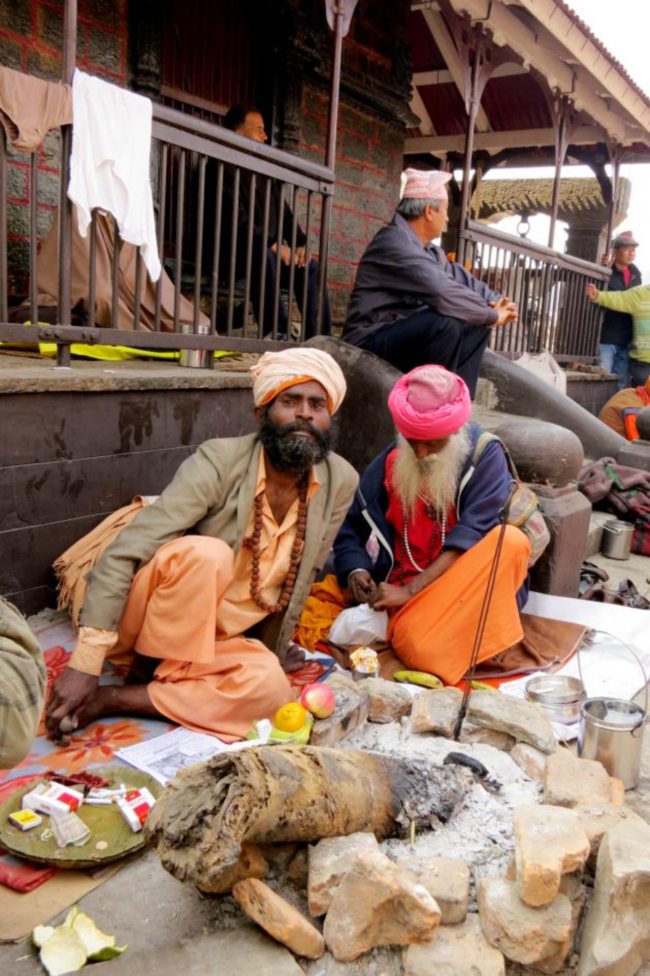 I found the mood of the festival both carnival-like, and a bit transcendental – a complex blend of religious worship mixed with elements of cultural networking. Our guide said that Shivaratri was also the time when prayers to Shiva are made by wives on behalf of their husbands, and also by young women wishing to find a husband. I watched groups of young men sitting with holy men smoking bhang in achillum (a clay pipe resembling a cannelloni) subtly ogling young women bearing elaborate offerings to the temple – and enjoying their casual glances in return. I could easily imagine a chance meeting in a marketplace later on:  Didn’t I meet you at Shivaratri? 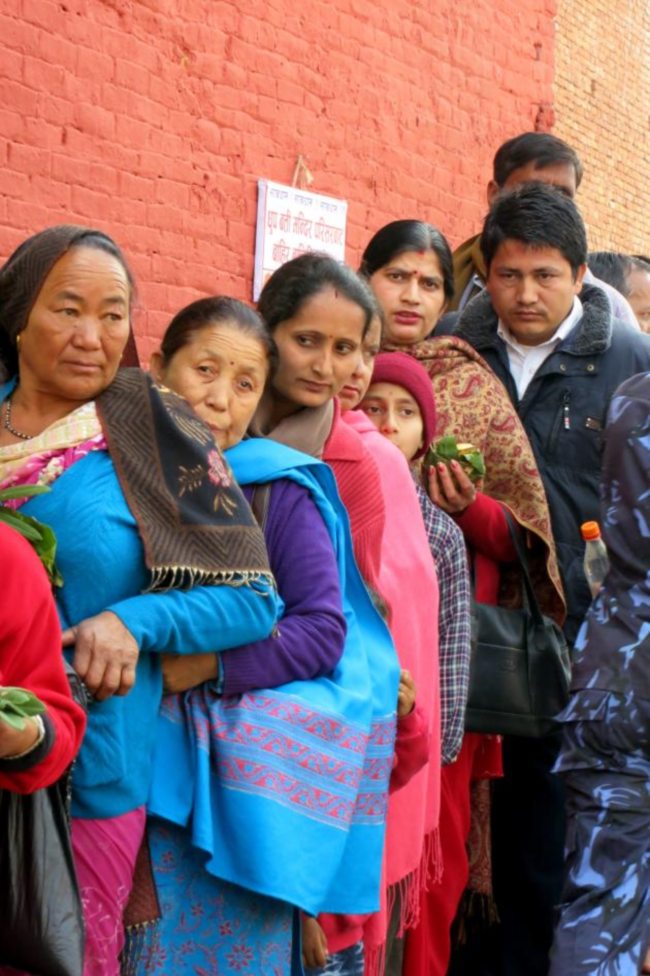 Despite my initial qualms, I found being part of a massive crowd of Shiva enthusiasts beautifully dressed exchanging beaming smiles and chanting rhythmic mantras at an exhilarating experience.  Later in the day, I asked our guide how such a throng of people could patiently wait in mile-long queues with such exuberance.  He explained the phenomenon this way: “For Hindu people, while Shivaratri is a very important day for many reasons, it is especially important for gaining positive karma: we believe that being courteous and respectful are important for life to flow without frustration.”  It should be explained here that karma is like spiritual currency that serves to mitigate the trials and tribulations of a serious spiritual pilgrimage.  The perceived value of this Karmic insurance, so to speak, even transcends local laws and allows for a virtual time-out in which smoking bhang is permitted.  While the law in Nepal explicitly prohibits such indulgence in normal circumstances, on this auspicious day police officers themselves would scarcely think of jeopardizing their own karma by enforcing the law against anyone seeking to commune with Shiva. 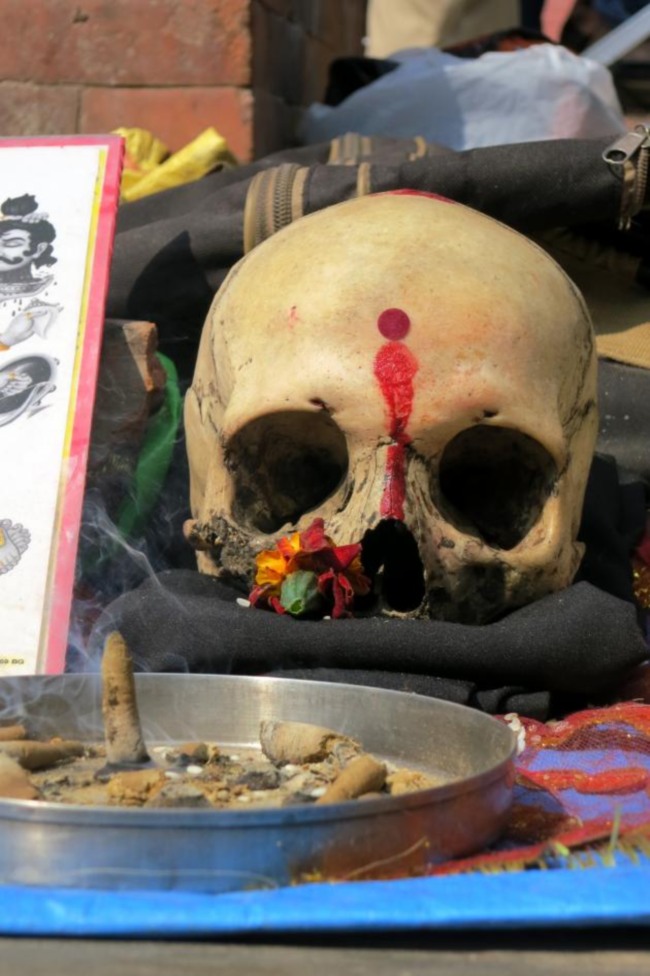 If you’re thinking of visiting Nepal, the awesome mountainous Shangri-La nestled between India and China, consider making the trip there during Shivaratri and head to Pashupatinath Temple in Kathmandu.  The festival provides the westerner with a unique opportunity to witness an authentic expression of belief rich with the rituals of an ancient  Hindu culture seeking to achieve union with the Absolute.  To the western mind, the core meaning of these rituals might seem somewhat obscure just because they are so exquisitely wrapped in the complex layers of ancient Hindu mythology but they movingly demonstrate the deep spiritual longing that resides at the heart of all religious ceremonies all over the world regardless of their cultural overlay.

The Shivarati Festival falls annually on the fourteenth day of the waning moon in the month of Falgun (February – March).  Seewww.nepaltourism.info for 2013 festival schedule.

Dwarika’s Hotel  – intimate and refined.  Located just a stone’s throw from the Pashupathinath Temple, the hotel houses an extensive collection of artifacts from dating from the 13th century and offers a serene respite from the sometimes frantic Kathmandu vibe. www.dwarika.com

Yak and Yeti:  In the heart of Kathmandu, and formally the Rana Palace Lal Durbar, the Yak and Yeti boasts a casino and is billed as a five-star modern day hotel where sophistication greets cultural heritage. www.yakandyeti.com

Mandatory.  Not just for the wealth of information, but to navigate through the enormous crowds and for obtaining the proper paperwork allowing access through a maze of guarded checkpoints.  We used Dip Chandra Kalika, owner of Kalika Tours.  ksimran35@hotmail.com