While much of one’s time at Burning Man is spent in art cars and theme camps with the luxury of time alongside long-time friends, my favorite moments involve the serendipity of making new friends. My virgin year (2000), I was still licking my wounds from an eleven-year relationship that had just ended. I jumped on my bike dressed like some extra from Priscilla, Queen of the Desert, strapped on my Walkman full of Moby tunes, and meandered like a slithering, aimless snake out in the deep Playa.

At some point, another similarly-decked out guy on his bike waved at me and followed my curvaceous ramble through the desert while he listened to his tunes. I was crying a little. He noticed and imitating Marcel Marceau, frowned and rubbed his eyes, and then gave me a big smile and an air kiss. We continued like twin snakes destined for the same place until 30 minutes later we parted with pink chiffon shimmering behind us, never to see each other again.

This year, one of the most popular Playa pop-ups was the Hug Deli where one could order a Bear Hug, a Warm and Fuzzy Hug, or a Gangsta Hug with a side order of a Tickle or a Pinch, all from a stranger who may soon become your best friend for the afternoon. I think they ought to set up this booth at the United Nations or maybe at the Israel/Gaza border just to see if this form of Playa diplomacy might create a more harmonious world. 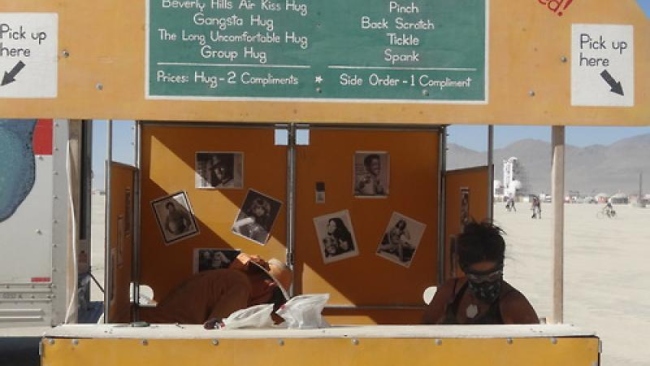