One of the most intrinsic and immediately transformative parts of the festival experience is style. Dressing up in something unusual, wearing a costume, adding silly accessories to an otherwise "normal" outfit, cross-dressing, daring to wear very little, only wearing one colour, wearing tonnes of colours, hiding your identity with a disguise – all of these options, and more, utilise clothing (or lack of it) to shed their everyday personas and become someone new. The idea of style is not limited to the catwalks of Paris and Milan; what people wear when they strut down the grassy verges of Glastonbury or the dusty playa at Burning Man appears to be having an increasing influence in the mainstream.

We have enlisted two knowledgeable and talented fashionistas, Tessla Goodwin from the US and Rosa Bloom from the UK, to give us the lowdown on what we'll see on festival grounds on both sides of the Atlantic in 2017. 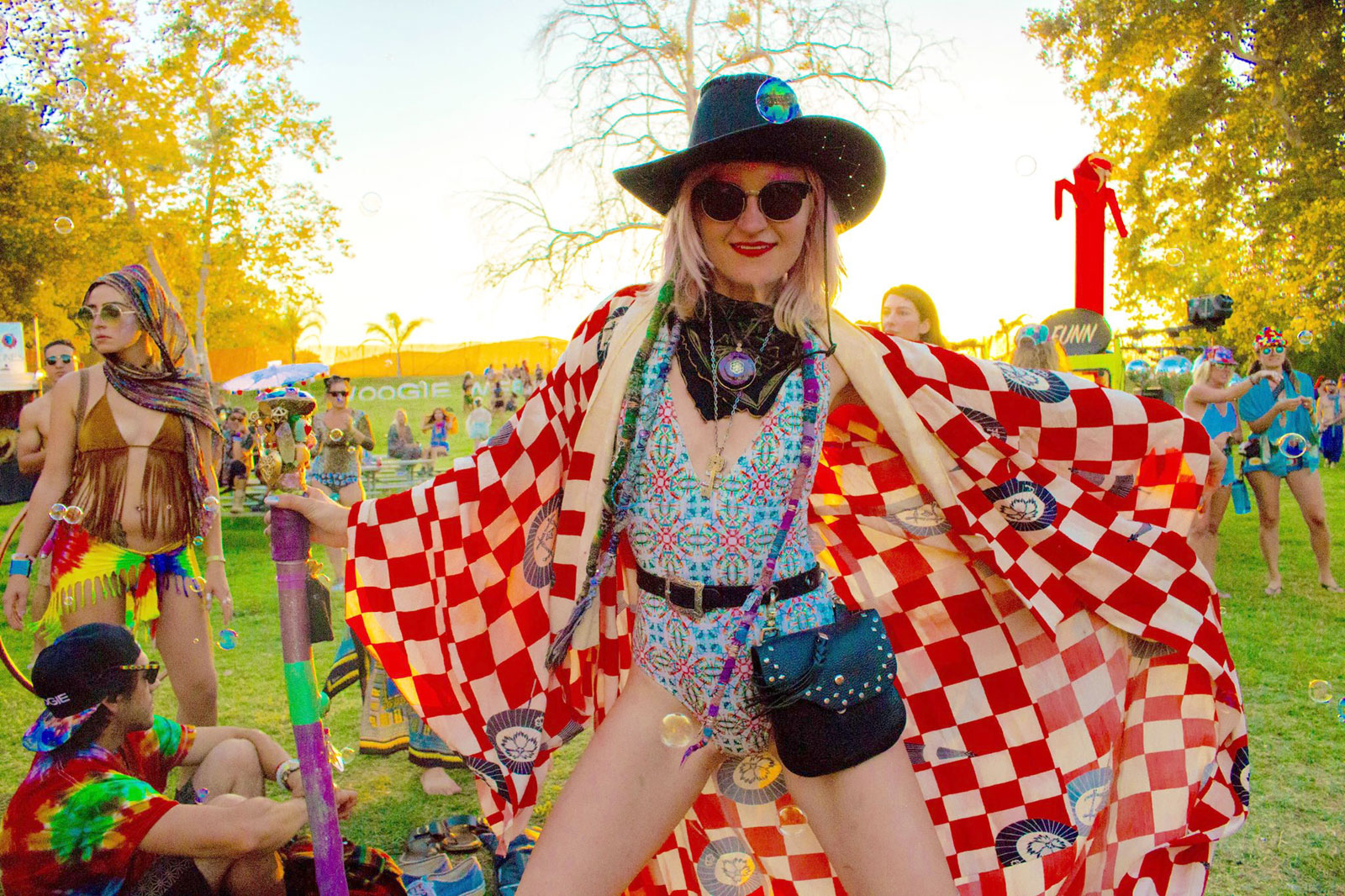 First up we have Tessla Goodwin, a self-confessed Glitter Spy who is on a mission to seek out the best in festival style and culture. Along with her cosmic soul sister, Ash, she operates as a personal and brand festival fashion stylist. Tessla is also Fest300’s very own Senior Style Correspondent and Vendor Coordinator for Desert Hearts. 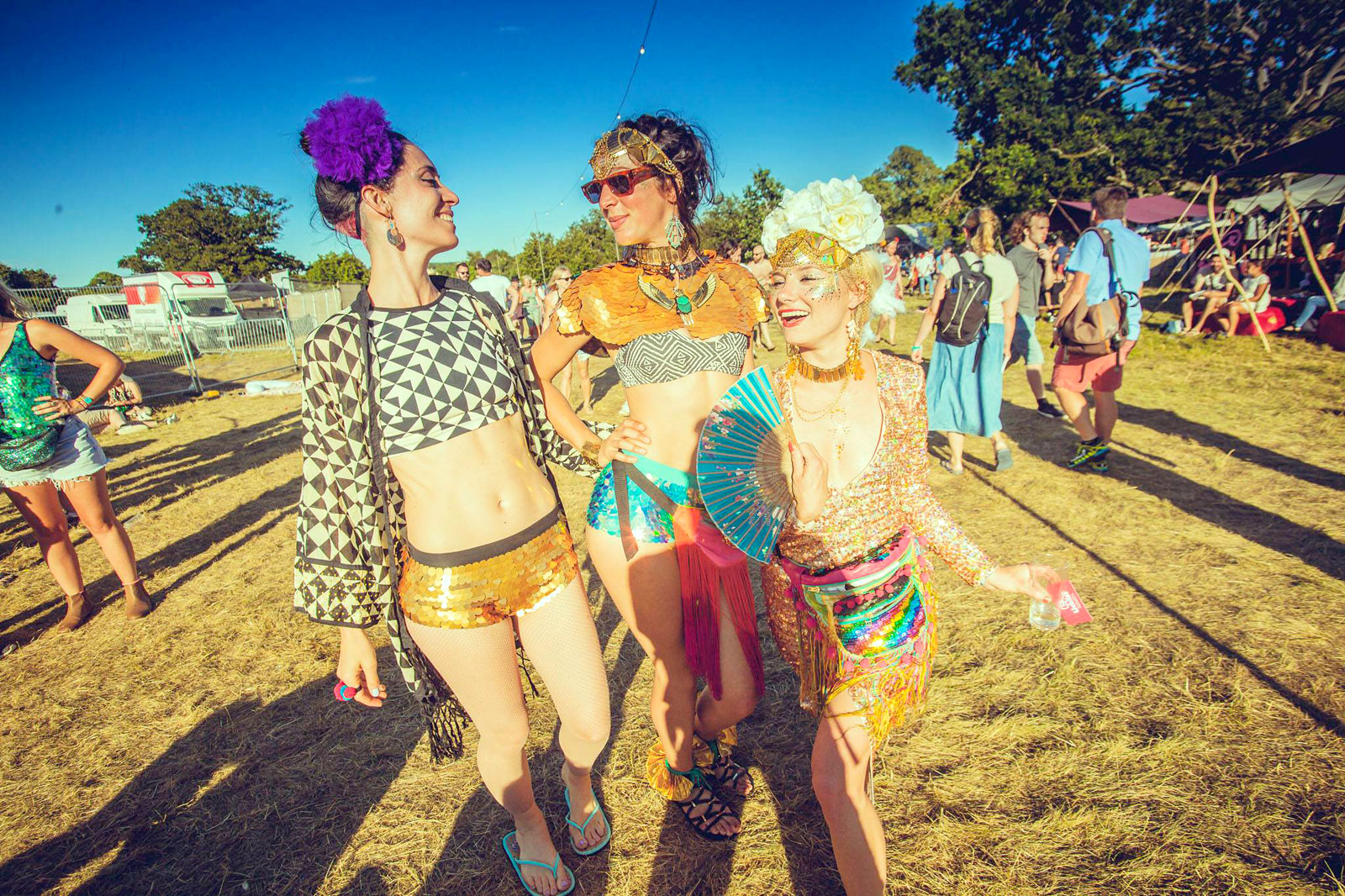 Meanwhile, in Great Britain Rosa Bloom (pictured in the middle in the photo above) has been involved in the festival circuit as a proprietor of eye-catching sequin-covered pieces. Her range has been so popular that she was hired to produce sequin-covered Santa suits for the highly-coveted Christmas window display at Selfridges . Rosa sets up shop at numerous festivals to sell her designs, and is a formidable trend-spotter and all round amazing individual.

We began by asking our experts to look back over the past year. What have been the key trends they’ve noticed?

“Here in the US, we have seen a huge meshing of genders when it comes to fashion. Nearly every trend spans both men and women,” Tessla tells us. Among the popular items she’s noted people wearing this 2016 season are “glitter and bindi face bedazzlements, onesies, sequin kimonos, rustlocks and coloured hair.” And one of the big comebacks this year, at festivals and across the board in society at large, has been chokers. Women have been sporting chokers as if it’s 1993 all over again, which is interesting to see and certainly a key trend on both sides of the Atlantic.

Speaking about the trends she’s witnessed in the UK, Rosa Bloom tells Fest300, “Headdresses of all kinds – flowers, pompoms, feathers – the works. Leotards/bodysuits have been popular for a few years now and are still going strong.” She also highlights the similarities between the US and UK, with bindis and other face embellishments, plus kimonos also proving to be popular on this side of the Atlantic. “Boho style seems to be making quite a comeback too – with a 90s twist – think gypsy tops, tie-dye, kimonos and floaty maxi skirts. Bumbags [fanny packs] as well, they're so practical for festivals, and now that there are a couple of brands making really beautiful and extravagant designs they can become part of an outfit, too.”

Both of our experts also pick out men and their penchant for leggings, which is obviously still quite amusing. It’s always bound to raise a smile when you see a man bounding around a festival flaunting his skinny legs in a pair of psychedelic leggings! 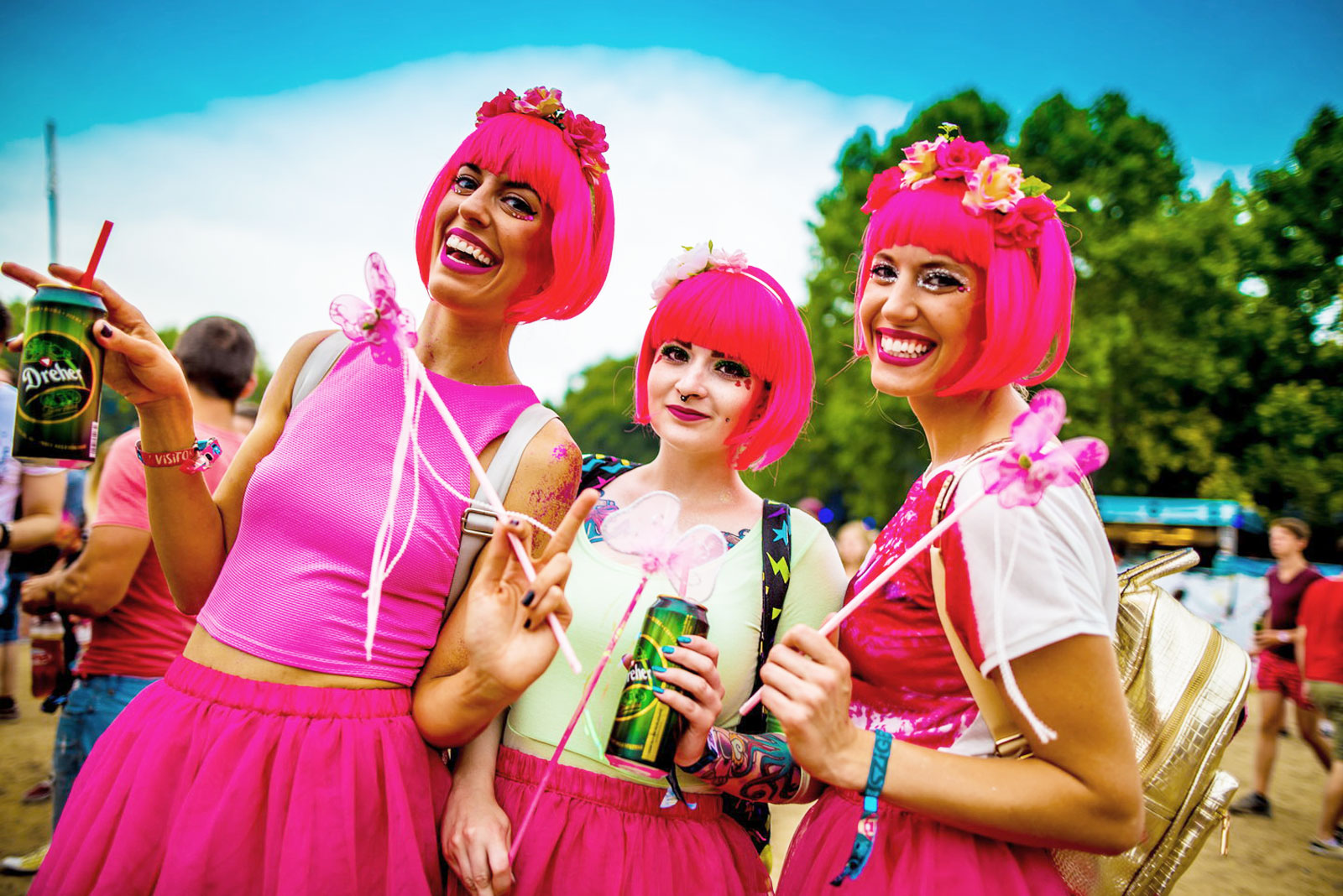 Colour-wise, Tessla’s keen eye has pinpointed pastels as one of the summer season’s main trends. She explains, “This past festival season was the first time I started to see pastel colors. The previous year it was all about rainbow and being really bright. While that is still popular, we started to see lighter colors, more airy and fairy. Particularly light pink and baby blue.” In Britain it’s been more attention-grabbing, colour-wise. “Iridescent materials have been pretty big this year – they're so eye-catching in a crowd or under party lights,” says Rosa.

Both reiterated that leotards and bodysuits were huge in 2016. Proof, we guess, that festival fashion isn’t always centred on what’s practical. How many of us have spent a little longer than we’d like in a festival toilet struggling to work our way out of a jumpsuit?!

Festival fashion on the high street 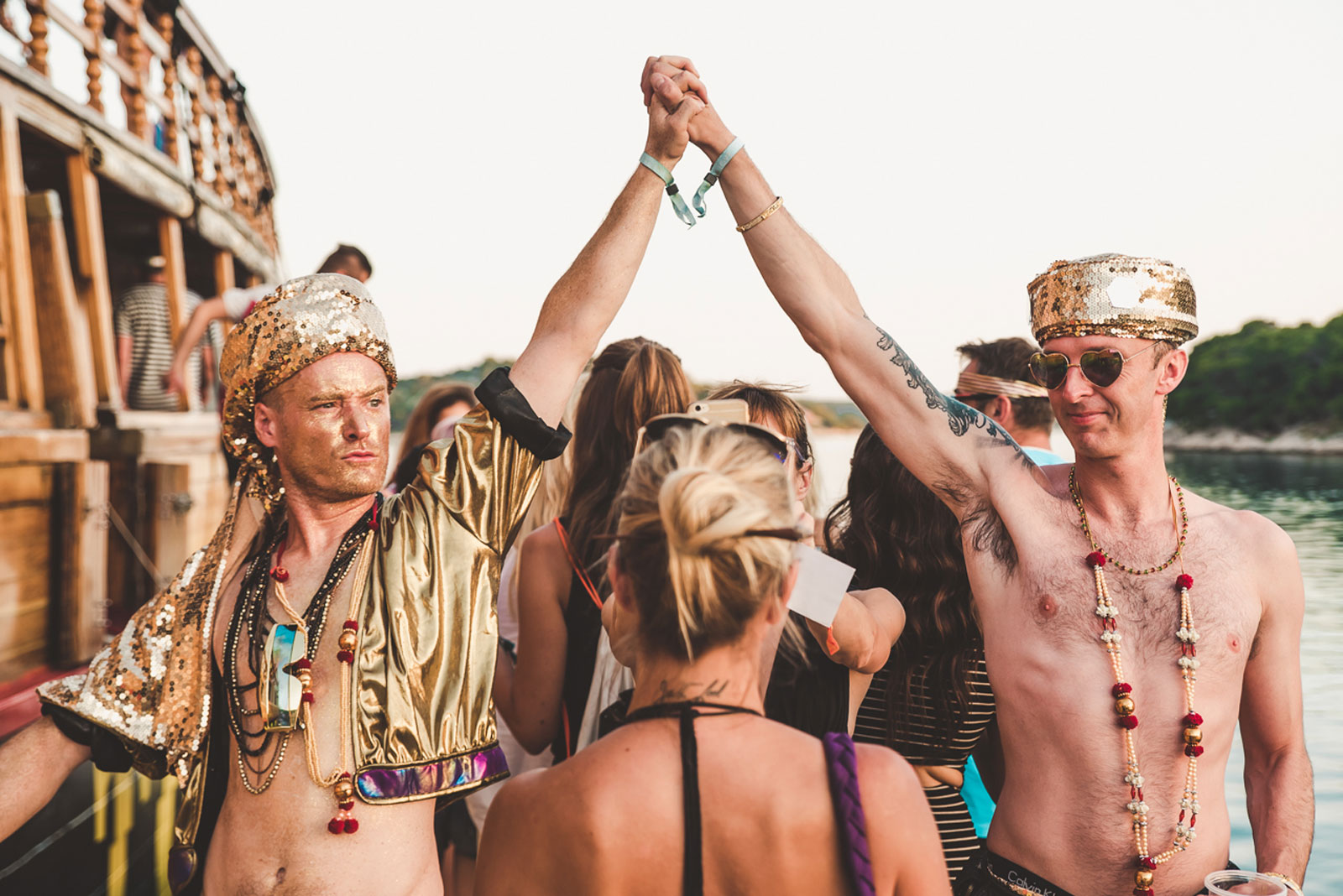 We also spoke to our expert duo about the links between mainstream stores and festival fashion. As the culture continues to grow, its influence undoubtedly spreads into so many aspects of every day life. Commercial entities now see the opportunities in associating themselves with festival culture. Rosa tells us, “The high street is taking more and more influence from festivals every year. Even to the extent of high street brands copying small festival brands – they're clearly sending scouts to festivals. That's kind of a shame.” We agree!

Tessla goes a step further, naming the fashion brands that have begun to step foot in the festival fashion arena. “Forever 21 had a Coachella branded collection this past season. Topshop sells face bedazzlements and headpieces. It has even gotten into high-end fashion with Burberry showing its models with glitter on their faces.”

In the UK, online giants like ASOS have festival sections on their sites, and high street chains like River Island and New Look are also featuring festival-inspired items as they bid to work their way into the market. 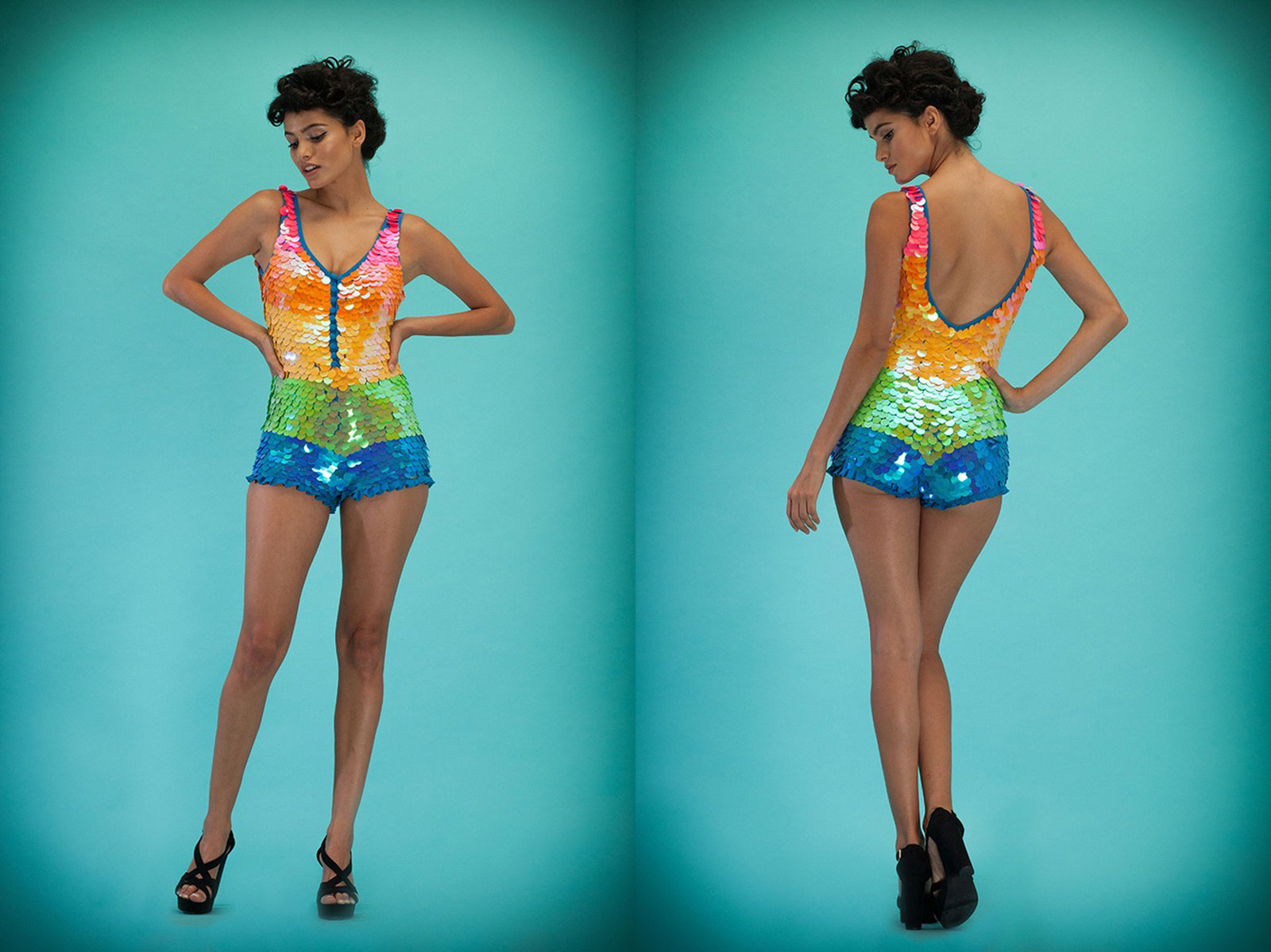 On the independent side of things, lots of people are setting up their own bespoke fashion lines aimed at the festival market. Rosa Bloom’s beautiful collections are perfect for people who want to make a big impression. Her bold colours and shimmering designs, which use large sequins to great effect, are perfect for anyone keen to stand out from the crowd.

Fest300 asked her which of her numbers has been the most popular this season. She told us, “My Sea Circus sequin playsuits. I never imagined these would become so popular. It's a leotard covered in big iridescent sequins (like scales) – which you would think would appeal to quite a niche audience – but actually, I have sold these to women of all ages, shapes, and sizes. I've worked hard to make the design a flattering and comfortable fit so it looks great on lots of different body types, and I think women just FEEL great in it! One of my friends calls it her 'empowerment suit.’”

Where is everything going? That’s what we want to know, what can our clairvoyant festie style experts tell us about what we can expect to see next year? Trends come and go; the festival world most definitely feeds off what’s going on in terms of the high street and at the top end of fashion, too. What’s hot at New York Fashion Week may well end up being reinterpreted by the festival crowd, while silly hats, comedy onesies and all the other common festival costumes (plus a whole bunch of weird, niche gear) will remain part of the culture forever. But what do our two style queens say?

Tessla is straight to the point, “Cowboy hats, more unique and different placement of sequins and sparkly accents, more men in flare pants.”

Rosa says, “I think it's just going to get more and more eclectic, as people play with taking elements of different trends and wearing them in their own way, expressing their own personality.”

“For women, I think metallic GOLD is going to be bigger than ever this year," Rosa added. "It looks amazing on everyone, and looks so fresh when combined with bright summery colours. For men, my prediction is dungarees, and Congo dandy style – think bright clashing block colour suits, shirts, and bow-ties, African prints – and probably mixed in with some sequins for good measure!”

We couldn’t end this piece without asking the two ladies to give our readers some advice for festival newbies who wants to look snazzy but practical.

Proving that they are both on the ball, their advice is remarkably similar. Tessla tells us, “Invest in one key piece that will go with many outfits. That could be a sparkly bandana, unique hat or a well-made belt bag or holster.”

Meanwhile, Rosa says, “Bumbags are a winner. And make sure your footwear is comfortable, whatever it is. You'll be spending a lot of time on your feet, so comfort is king. My top tip would be, buy your outfits from independent small brands.  Instagram is great for discovering new labels and makers doing unusual and exciting new things. That way you are so much more likely to get something unique, high quality and just way better than anything you'll find on the high street!”