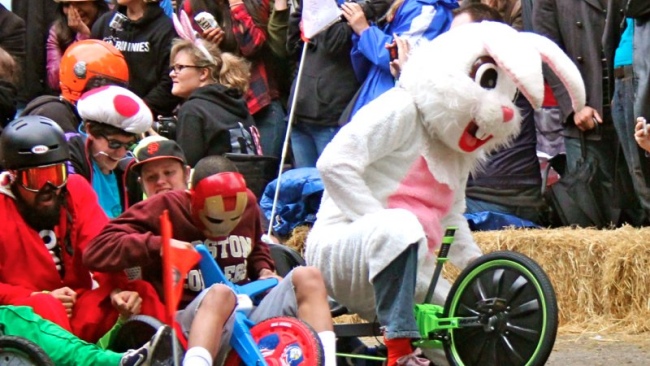 With sunrise sermons, determined egg hunting, bonnets, bacon and bombing hills on Big Wheels, San Francisco is unparalleled for Easter party hopping. The city by the Bay is seven miles squared to the power of awesome. It’s a geographically blessed urban playground lined with forested mountain tops, twisted streets and green parks making it a near perfect place to call home and a perfect place to celebrate a holiday. From charming to alarming it’s all here, whatever your taste may be. It’s all about choosing your adventure in a city with so many options. Or, can you have it all?

Easter might be San Francisco’s second place wacky holiday, but it’s gunning for first. It’s an annual buffet of quirky events from dawn to dusk. Never one to pass up a buffet, I decided to pack a host of Easter traditions, old and new, into one day.

Across the world, Easter is the ultimate mashup holiday. Christianity has a history of putting a holy spin on pagan rituals (e.g. fertility symbols such as bunnies and eggs) to lure natives to the church. San Francisco is even better at twisting these religious traditions into something, well, just plain twisted with a penchant for fun. 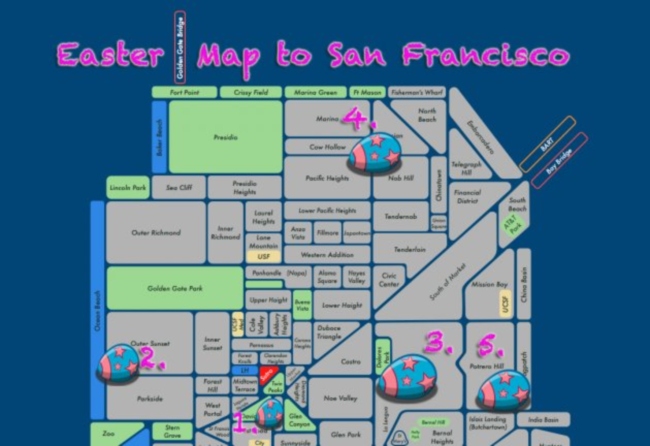 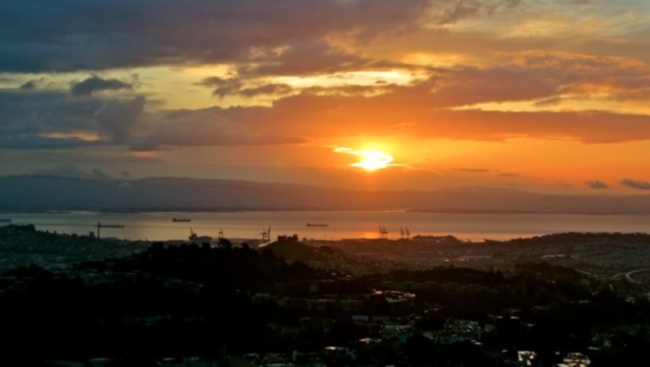 A glorious Easter sunrise between storms

Like most San Franciscans, I identify more with ‘spiritual’ than religious, but I was raised with early morning Easter Egg hunts and still adore the Easter traditions. And, from the traditional to non-traditional, San Francisco will constantly surprise you on this holiday. Despite my local status, and a love of going to the highest peaks in any city, I had never been to Mount Davidson before. At 928 feet it’s San Francisco’s most lofty peak.

Mount Davidson is home to America’s largest cross, a stone behemoth that peers out from a clearing of an Amazonian-like dense forest. The first sunrise ceremony was organized in 1923. The cross that you see today was organized by the city council in 1933, in a campaign to fund the cross by one dollar donations from citizens in an old school, kickstarter-style project. It was sold after a court battle in the 90s, by vocal citizens arguing for the official separation of church and state in San Francisco, to the Armenian American church who uses the landmark to bring light to the Armenian genocide.

On the eve of Easter, the cross lights up with 50,000 watts of light until the first rays of the sun take over, welcomed by “Amazing Grace” played on the bagpipes by Lynne Miller. Climbing the steep hill to the cross, I couldn’t help but be reminded how blessed I am to live in such a diverse city. The views from Hunter’s Point to Ocean Beach, in between storms in the morning light were stunning. The morning service united the Irish, Armenian, African American and other local communities in a non-denominational feel-good event. 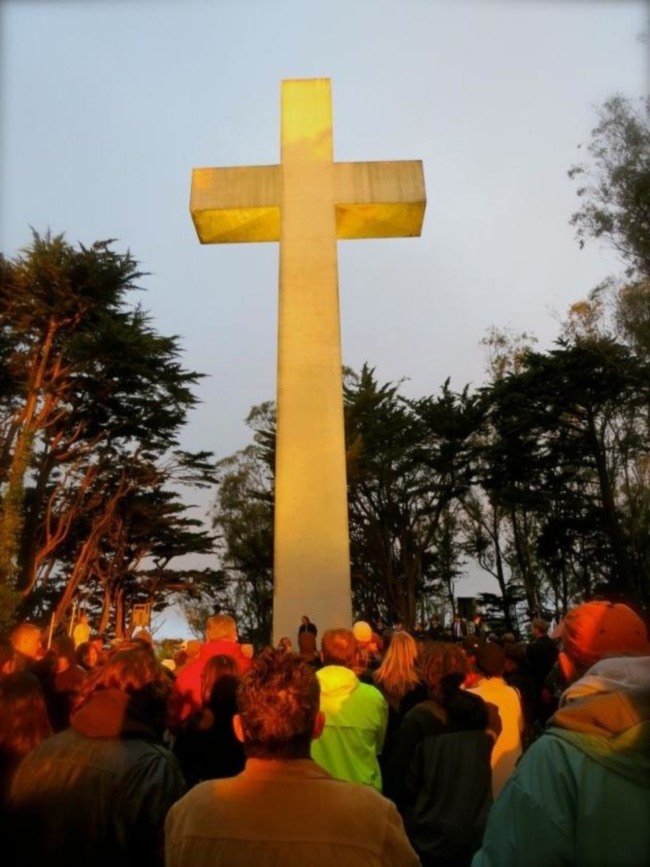 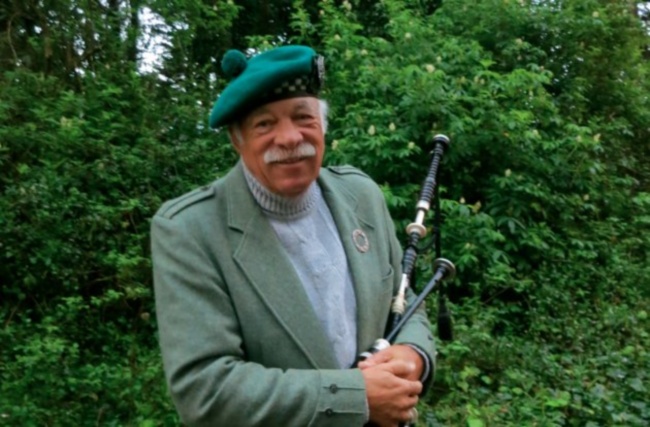 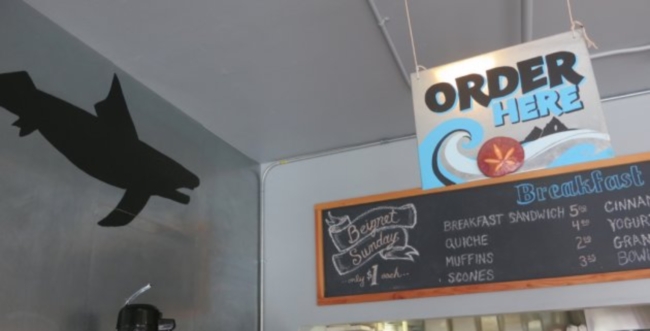 Decadent and delicious, this beloved, shark-themed bakery serves up homemade-to-order Sunday Beignets, a French-inspired pastry, served discretely in a brown paper bag filled with powdered sugar, hot and fresh. They also stack their tasty breakfast sandwiches with heaps of thick, savory bacon. This was the Easter brunch of champions, a high calorie meal to fuel me for the next three events. It’s easy to find, just follow the powdered sugar-caked smiles right to the front door. 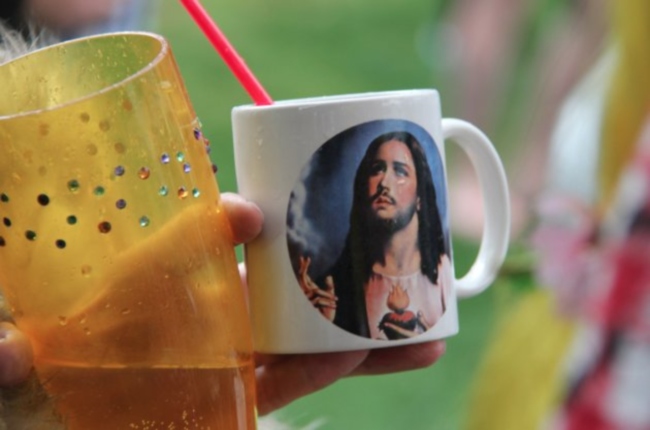 Dolores Park is usually the sunniest spot in the city, except for this Easter when torrential downpours rained out the infamous “Hunky Jesus contest,” another quintessential San Francisco event. But earlier in the day, despite the rain, people came in hundreds to the drenched park, excited to catch the incredible Easter Bonnet contest. The organizers, the Sisters of Perpetual Indulgence, are the only sisterhood of brothers we know. These queer nuns have been putting the eggs in Easter since 1979 and promoting understanding and diversity through humor and irreverent wit. 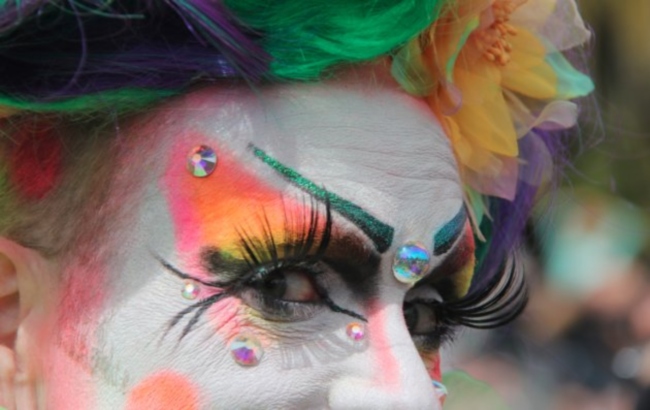 We couldn’t help but notice that the nuns looked like Human Easter eggs. They arrived dressed in their Sunday best with beards and faces dyed in a rainbow of colors. Parody is not lost on these sisters. Ten-foot tall flower hats, giant baby chicken headwear, and a huge ant-infested picnic – these over-the-top hats are a fitting satire to what American holidays have become. Not out of place in San Francisco’s own Beach Blanket Babylon (America’s longest running musical review complete with enormous hats), these monstrous bonnets were a perfect play on the massive consumerism that most holidays have become. 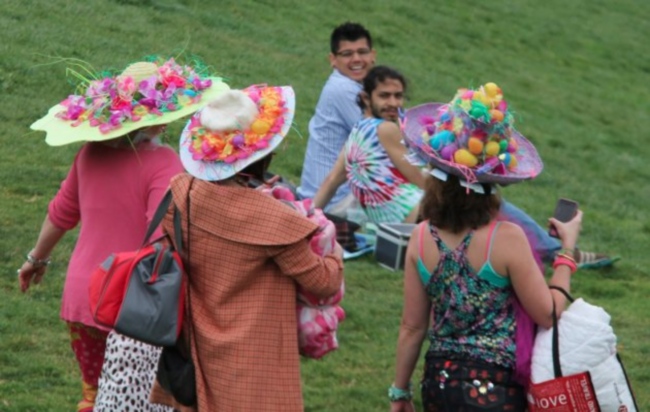 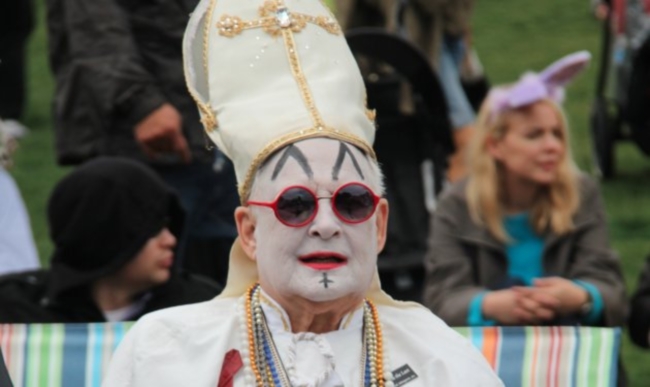 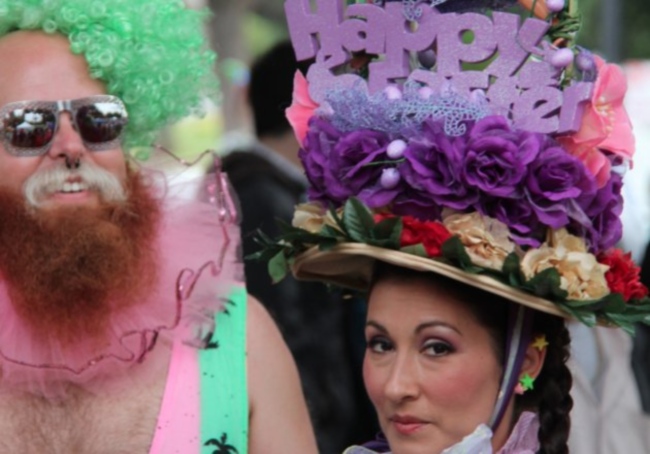 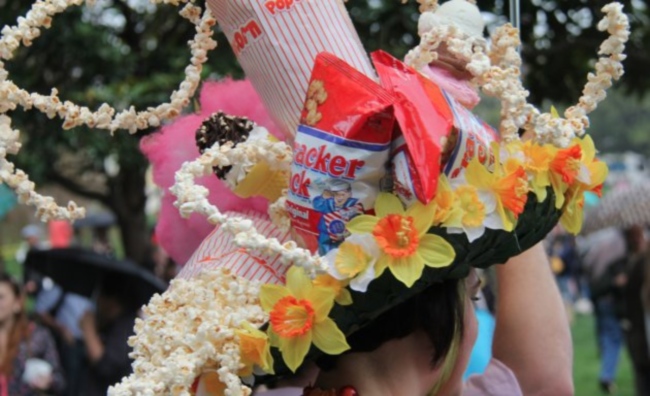 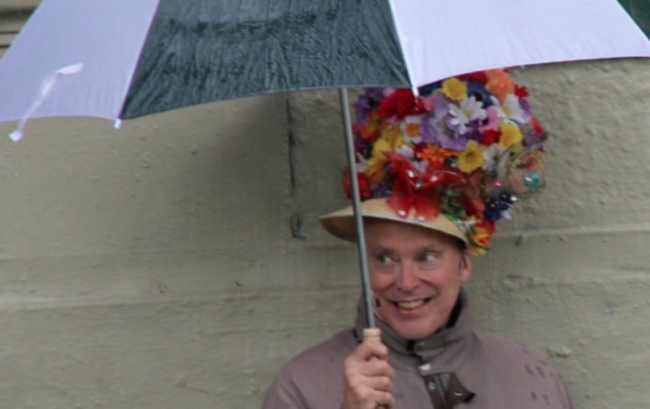 In a city of adult children, this G rated event is big on cute, medium on weird and low on naked. Expect rollerskating cows, bunny art cars, pony rides, fair food and young kids whizzing around on sugar highs from all the Easter candy. While the Awww factor is high, the WOW factor is perhaps the lowest of the day. Well, except for the cows…they got both. 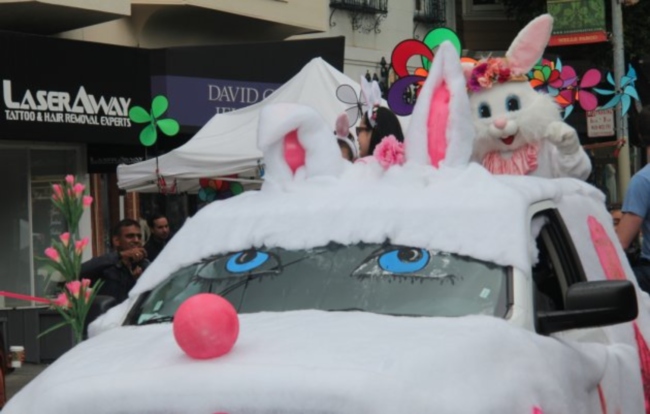 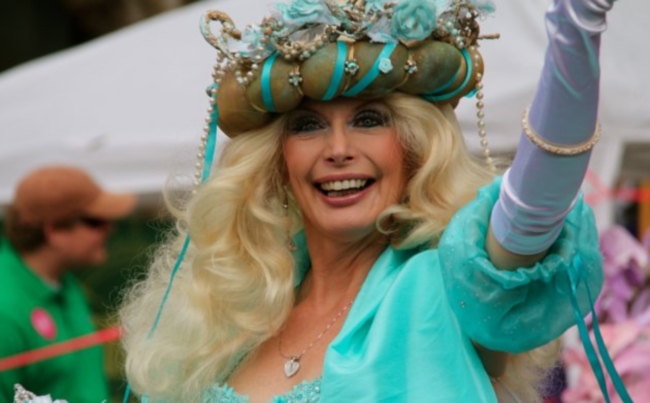 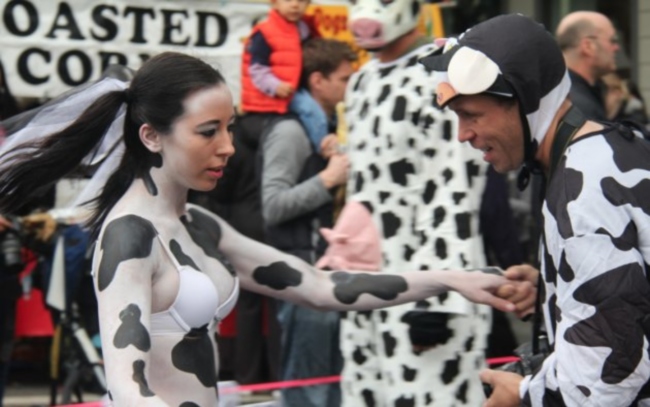 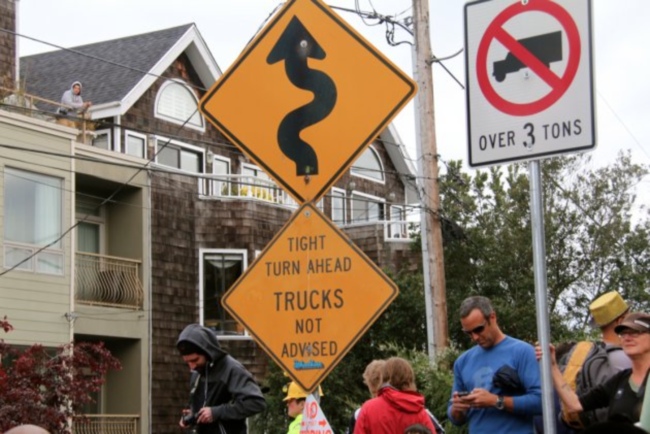 Contrary to popular belief Lombard Street is not San Francisco’s curviest, steepest road. It is in fact Potrero Hill’s Vermont Street. In its lucky 13th year, the Bring Your Own Big Wheels competition, or BYOBW for short, is one of the Easter events that makes me proud to be born in this city. This one is purely in the name of a good time. Children of all ages – in the hundreds – race Big wheels, trash cans, and office chairs down the most intimidating hill in all of San Francisco.

It’s a crash course in downhill racing. Be prepared for “hare-pin” turns where you will be stacked up against the Easter Bunny, Giant Marshmallow Peeps, the Yip Yip aliens and the Jamaican bobsled team. Smiles are as plentiful as scraped knees in a fun-filled event for the whole family. Joyful kids are allowed to be in the first race – cheered on like rock stars by the thousands lining the course. Used toys are donated to local communities of kids in need. If you decide to race, helmets and gloves should be a bare minimum – you can get going very fast and cement hurts. 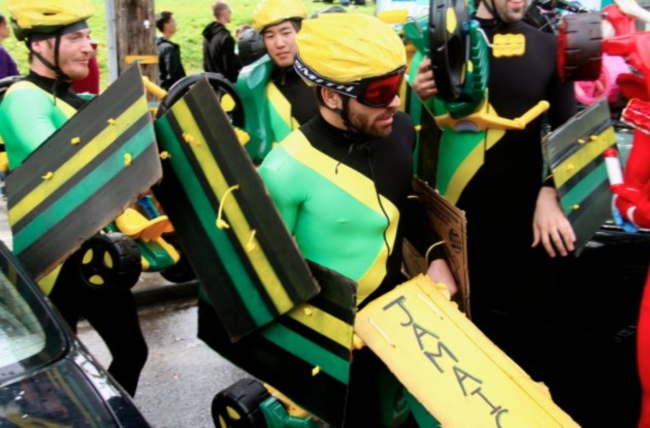 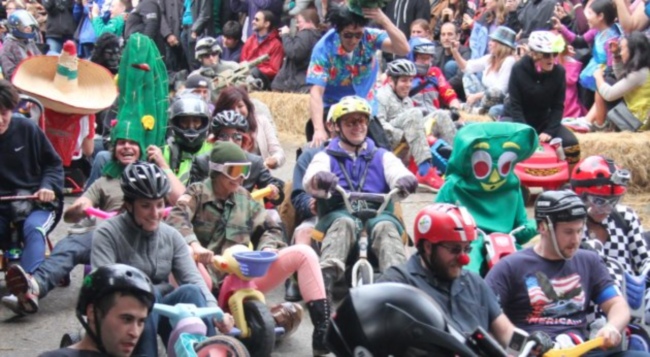 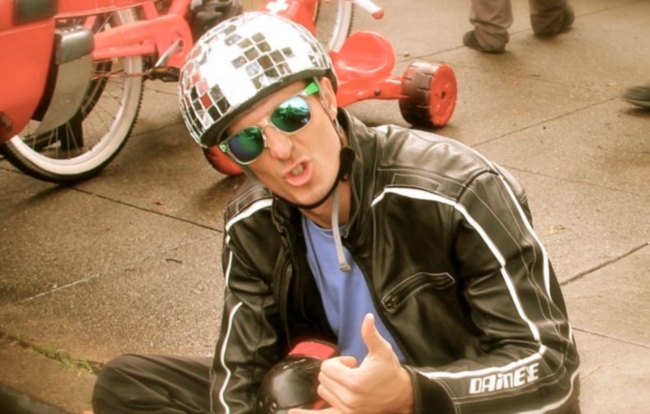 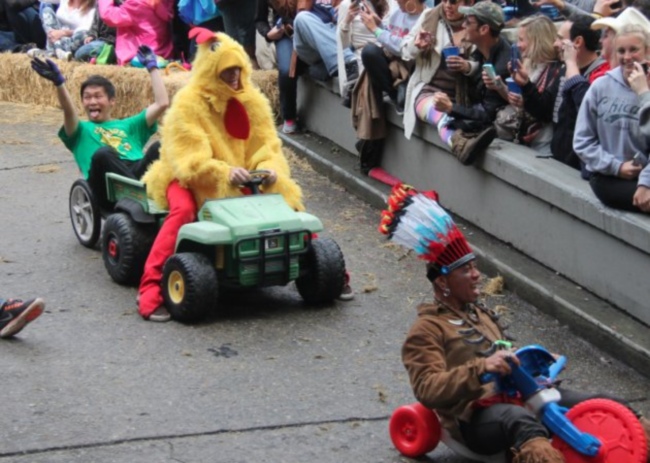 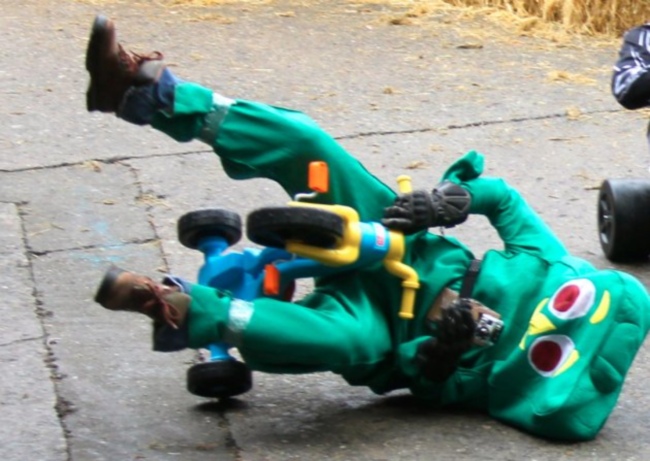 A couple of laps and a lot of crashes later, it was time for the main event: dinner with my family. Feeling thankful for the bounty that is San Francisco as I celebrated the most important thing: the pleasure of sharing Mom’s home cooked Easter lamb, good company, and family.