Scoping Out The Competition At The Cheese Roll

Upon arriving in Gloucester, I jumped in a cab and made my way to rural Brockworth where the action happens. But, I hadn’t been warned that even the spectators will work up a sweat, as it’s nearly a kilometer of incline hiking to get to the promised hillside. 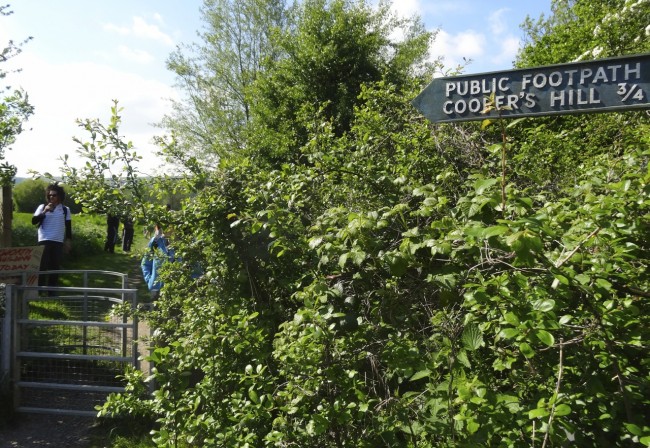 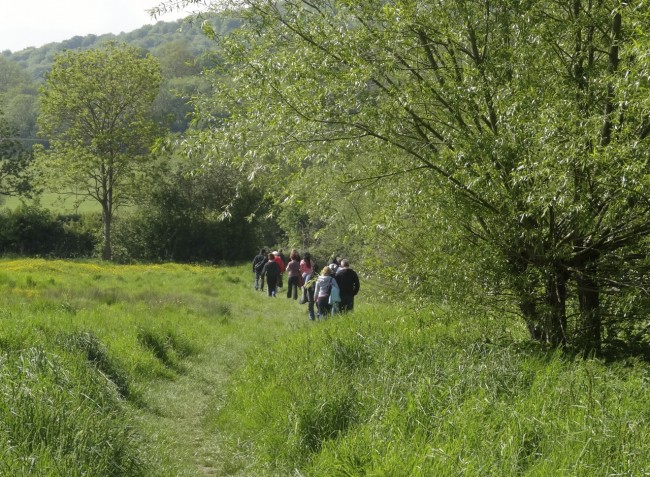 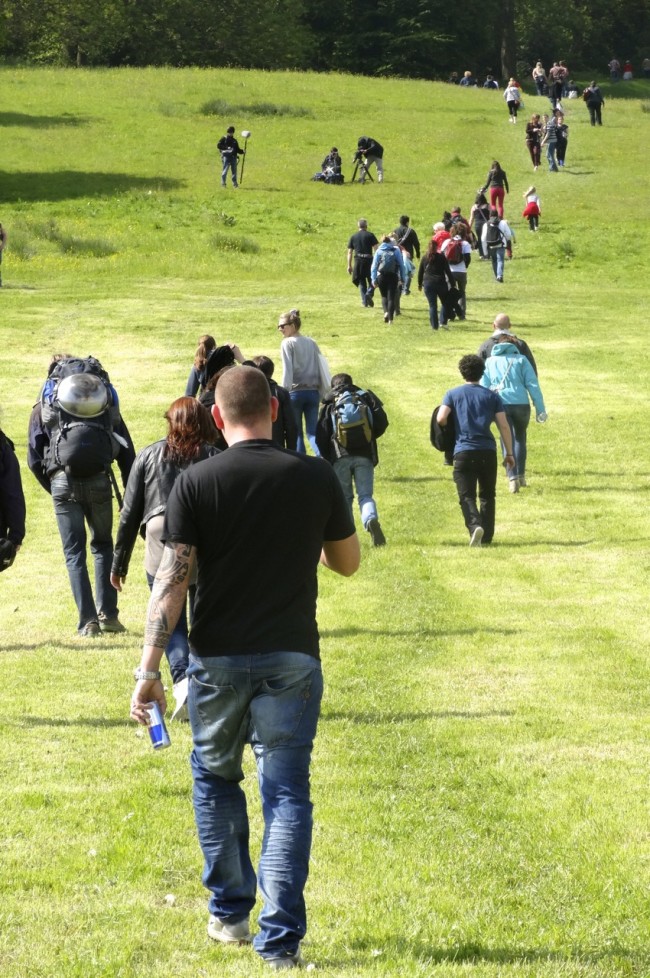 You end up at a rather famous crossroads where the Cotswold Way footpath intersects with Cooper’s Hill. Cotswold Way is a 102-mile long, stunning path that is popular with runners who try to traverse it in a three-day period. Yes, there must be something in the air in this region that prompts people to put their body at risk! 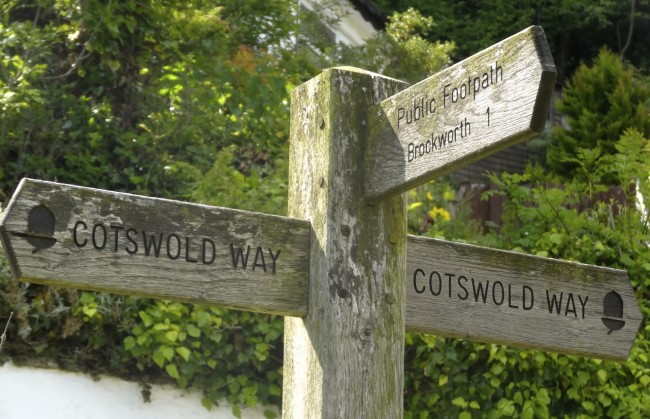 Upon arriving at the hill, I was struck by how short and tall it is. It’s a brief ski slope, maybe a few hundred feet long, but it’s also virtually vertical. And, while I feel welcomed by the sign at the top, I also start feeling like this roll isn’t meant for anyone over 30. 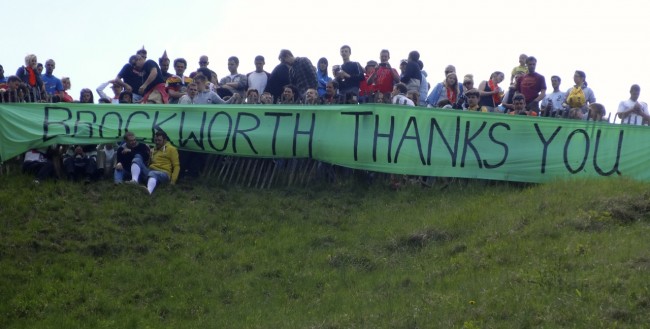 And, then, I came upon a local John Anderson who’s related to Chris Anderson, the long-time reigning champion of the Cheese Roll as captured in this fine music video by the Maccabees:

It turns out that Chris has been called up by the British military and shipped-out just before the competition so, for the first time in many years, there’s an open field and we will be crowning a different champ. Here’s my interview of John Anderson:

So, given the possibility that I might win this thing at age 52, I traversed up the hill to see what the cliff looked like from above (I’ll tell you more about that experience in my next blog post). Upon arriving at the top, it became pretty clear that this thrill-seeking adventure was made for those who were either very young, very drunk, or very high as I smelled some weed at the top of the hill. I didn’t qualify for any of those categories, so I decided to take the role of a spectator. 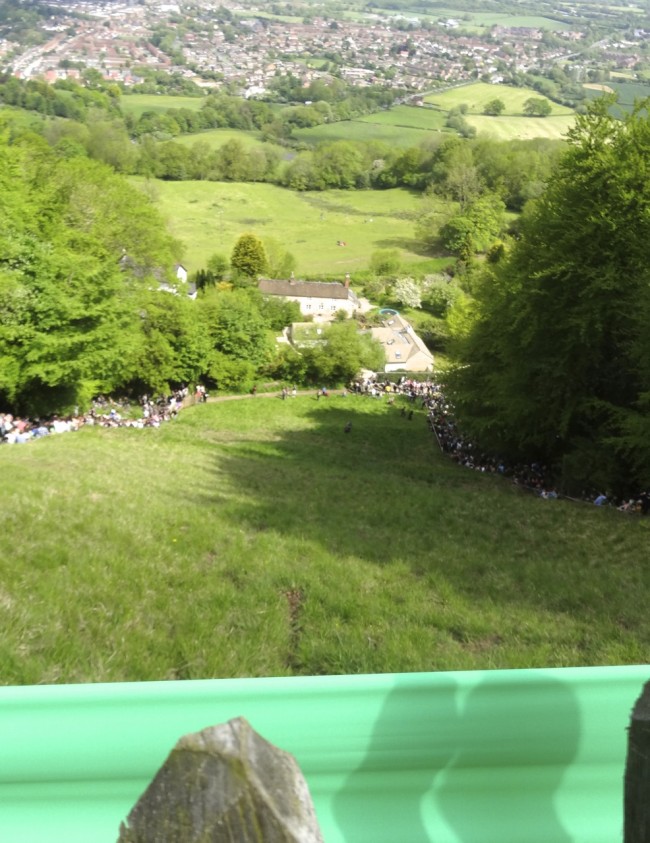 By looking around, you could tell which were the intrepid souls who would put their bodies at risk as they were typically costumed. There was a ninja who’d flown in from Japan, Captain America who’d made the pilgrimage from Colorado Springs, a shining soul draped in a Spanish flag, a Brazilian who was deft in his use of pillows, and a bear who had inserted padding throughout his wardrobe. This was an international spectacle full of superheroes. 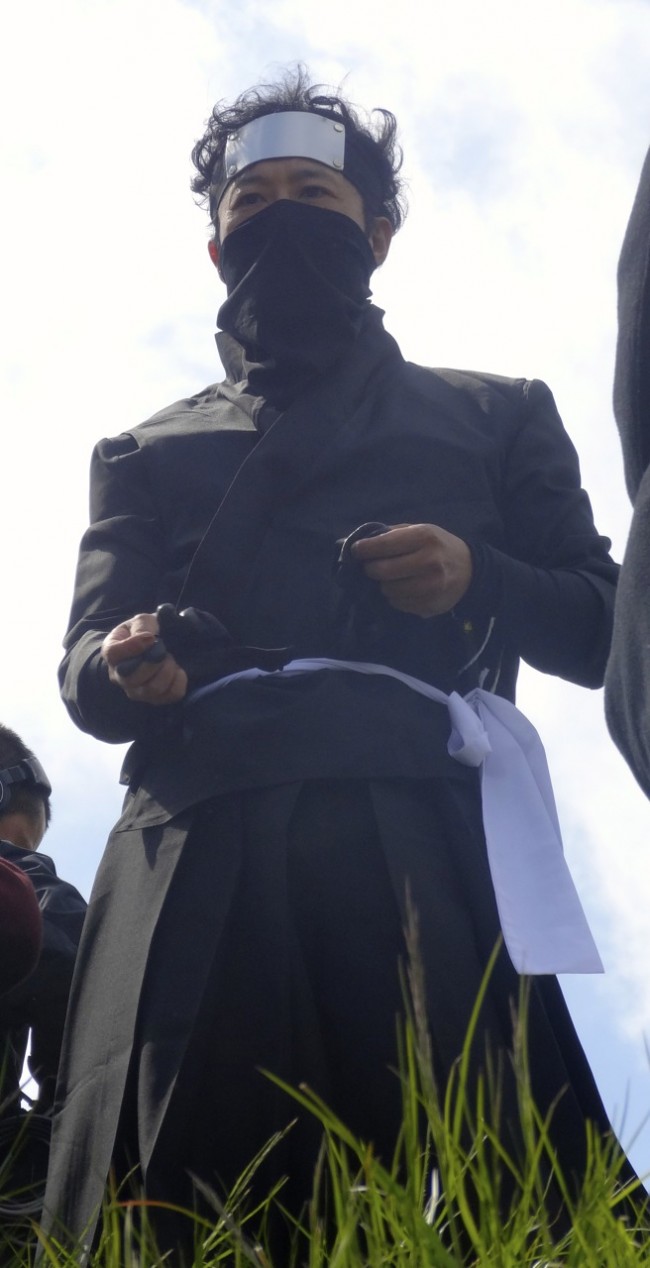 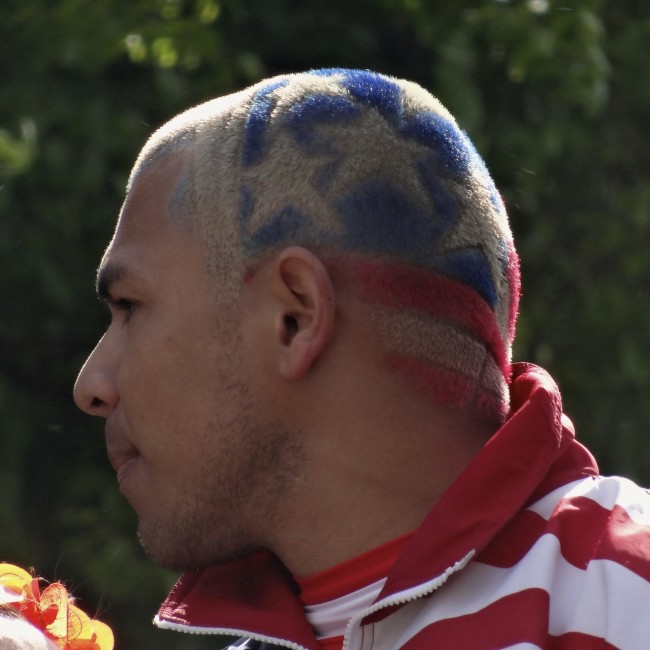 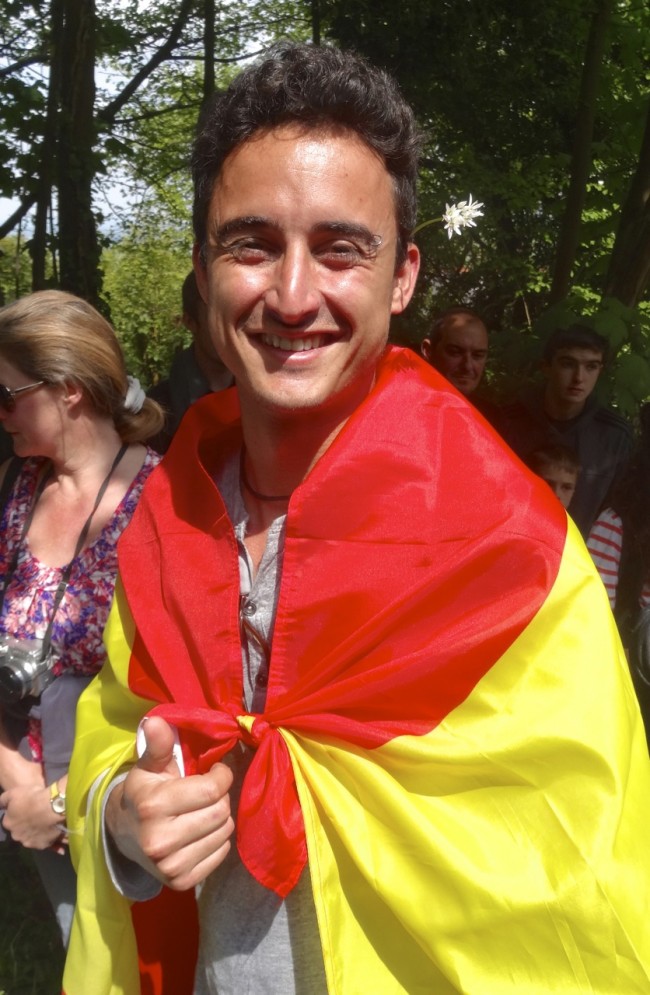 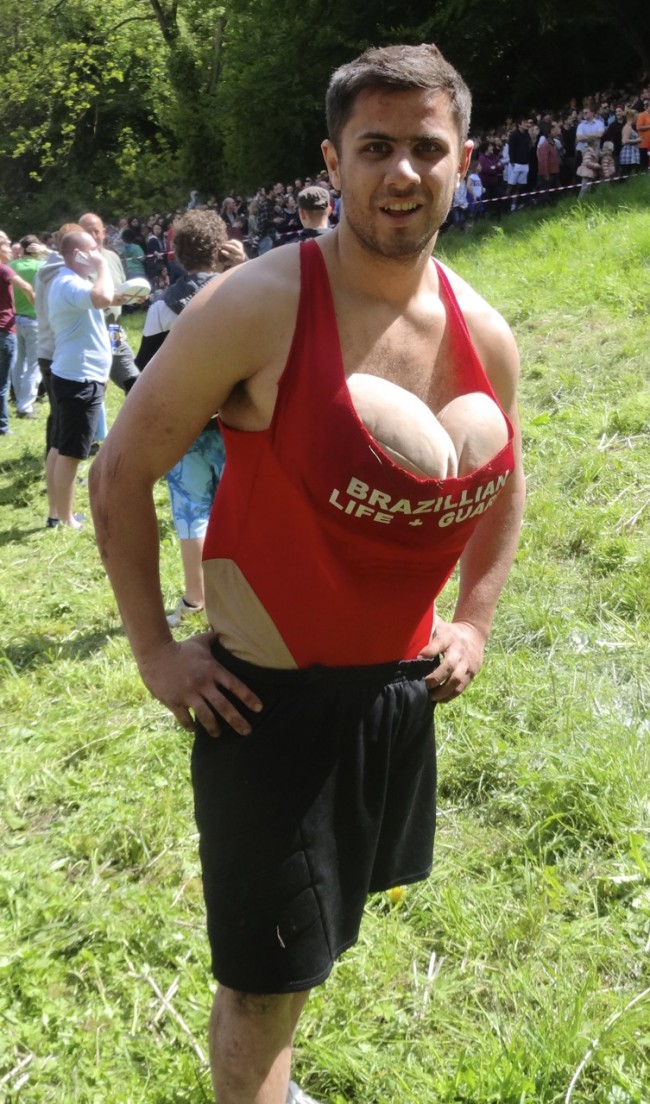 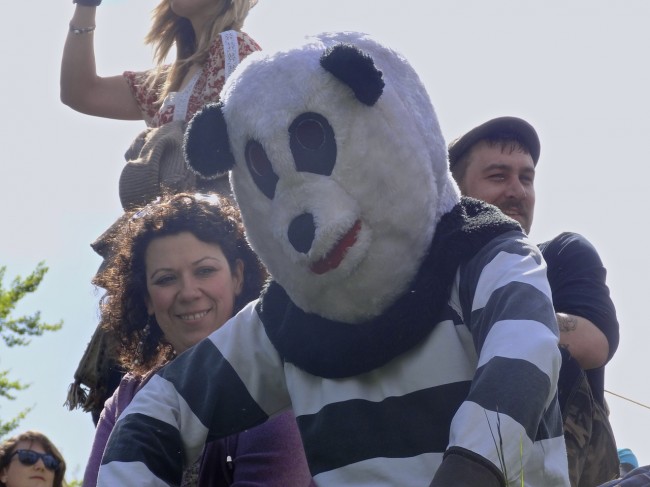 There was even a helicopter flying above with a local TV station shooting footage of the event. 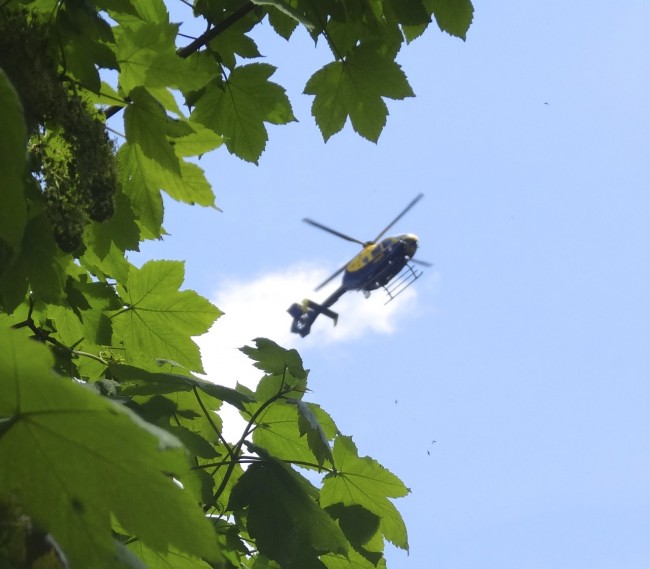 But, if you thought those braving the run down the hill were the hearty souls – you should have seen the burly boys at the bottom of the hill. These dedicated participants are positioned to help slow the cheese rollers down so they don’t run into the dense forest and break a neck at the finish line, with all that momentum thrusting them forward. 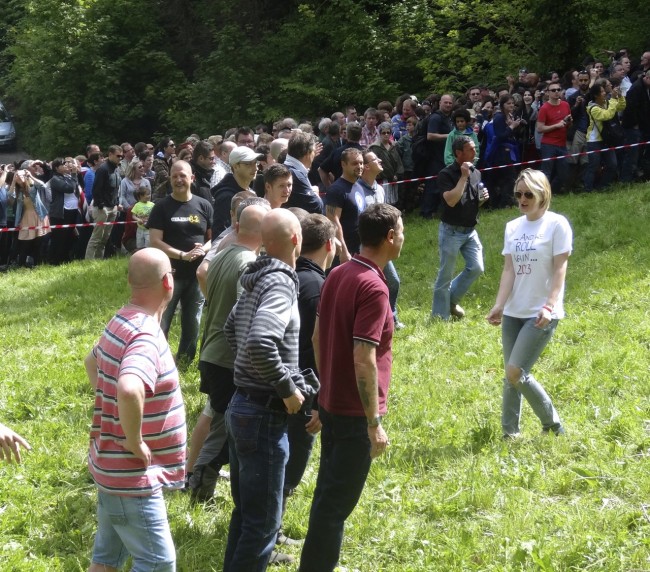 Well, folks, I’ve now set the table for this freaky feast. Let the adrenaline roll! Will tell you who won in my next blog post.