The ABCs of EDC

Sometime in between the all-out rave at the Taco Bell Cantina on the Las Vegas Strip and the sight of a human disco ball gyrating above the dance floor on Saturday night, I realized that Vegas is the perfect place for Electric Daisy Carnival . The Strip is already one huge party going on 24 hours a day, and extending the idea that everything should be a spectacle to the Las Vegas Motor Speedway for EDC seems quite natural. It’s a wonderfully oversaturated assault on the senses. It’s a three-day celebration of weird. And it’s everything I hoped that raves could be when I started going to parties nearly 20 years ago.

As I wandered the festival grounds I took it all in, and found hundreds of things I could celebrate. But here are the things that made the shortlist, from A to Z.

All Are Welcome Here

Insomniac’s tagline for the annual Electric Daisy Carnival speaks volumes in a time when the world seems divided on so many issues. One thing that the 400,000 people who attend EDC can agree on is that there is room for all kinds Under the Electric Sky. 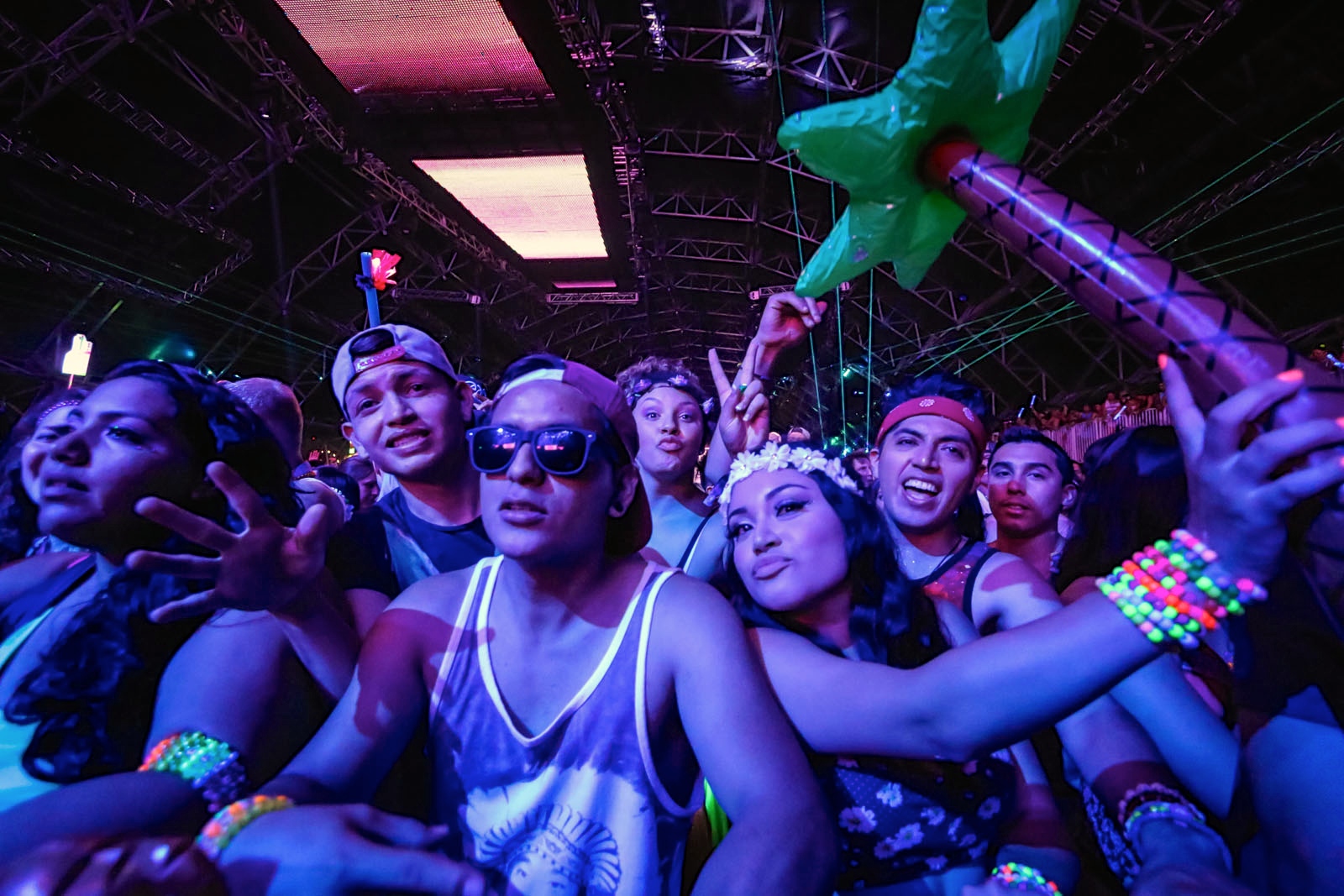 The L.A.-based crew will bring the energy of their intimate gatherings to Corona Electric Beach on Saturday of this year's fest, and there will be plenty of off the wall b2b sets that may never happen anywhere else again, plus special guests to keep things lit until the wee hours of the morning. 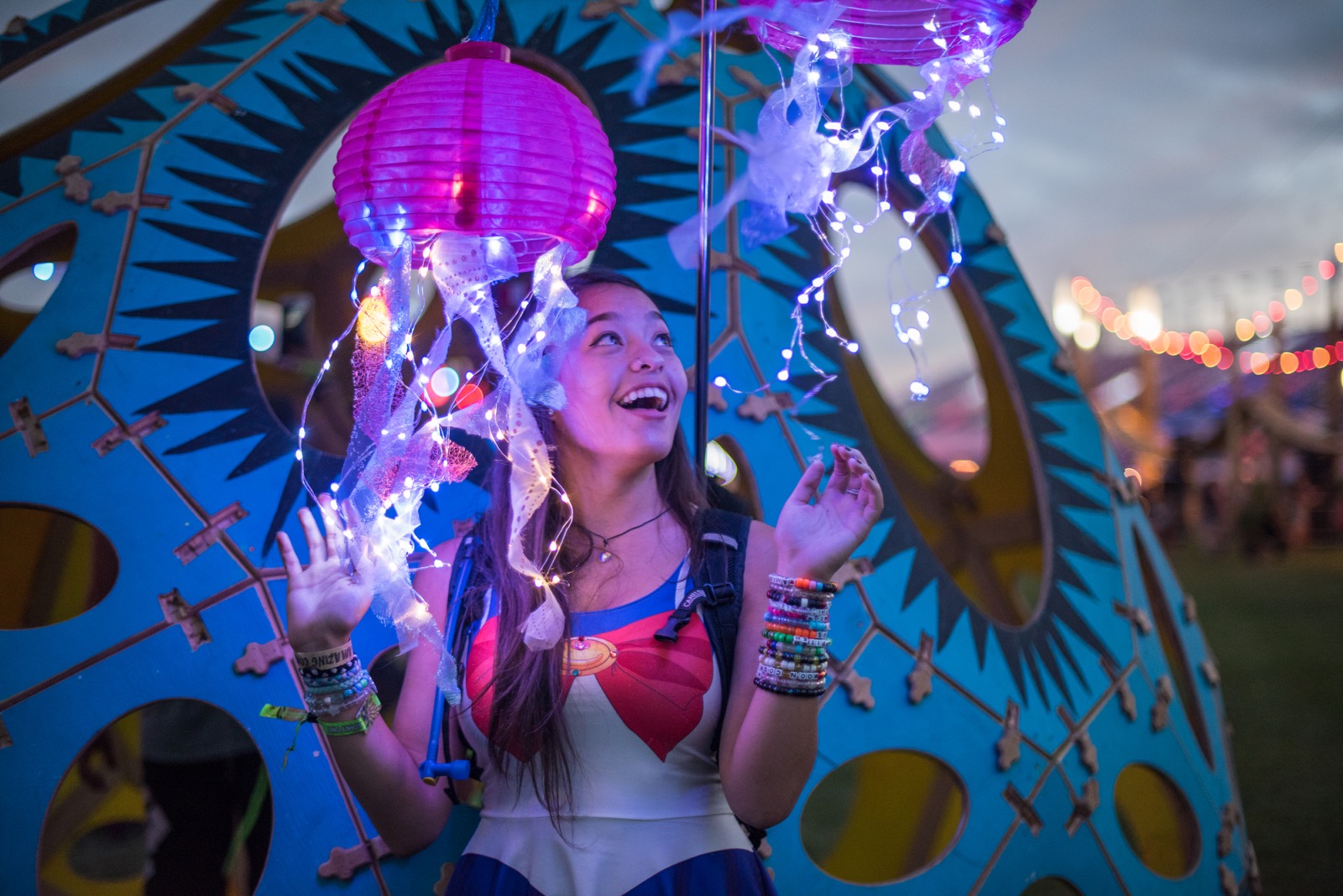 Photo by: Skyler Greene for Insomniac

The festival site stretches over 90 acres of the Las Vegas Motor Speedway and your crew will do laps around the place. Last year, we walked an average of 10 miles a day, so finding a nice place to chill was key. Besides the somewhat peaceful grassy areas on either side of cosmicMEADOW, we stumbled upon some air-conditioned train cars near the Kalliope art car that were private, comfy and cool. Having a VIP pass doesn’t hurt when you want to take a load off; most of the VIP sections were full of great places to sit while taking in fantastic views of the mind-bending stages. 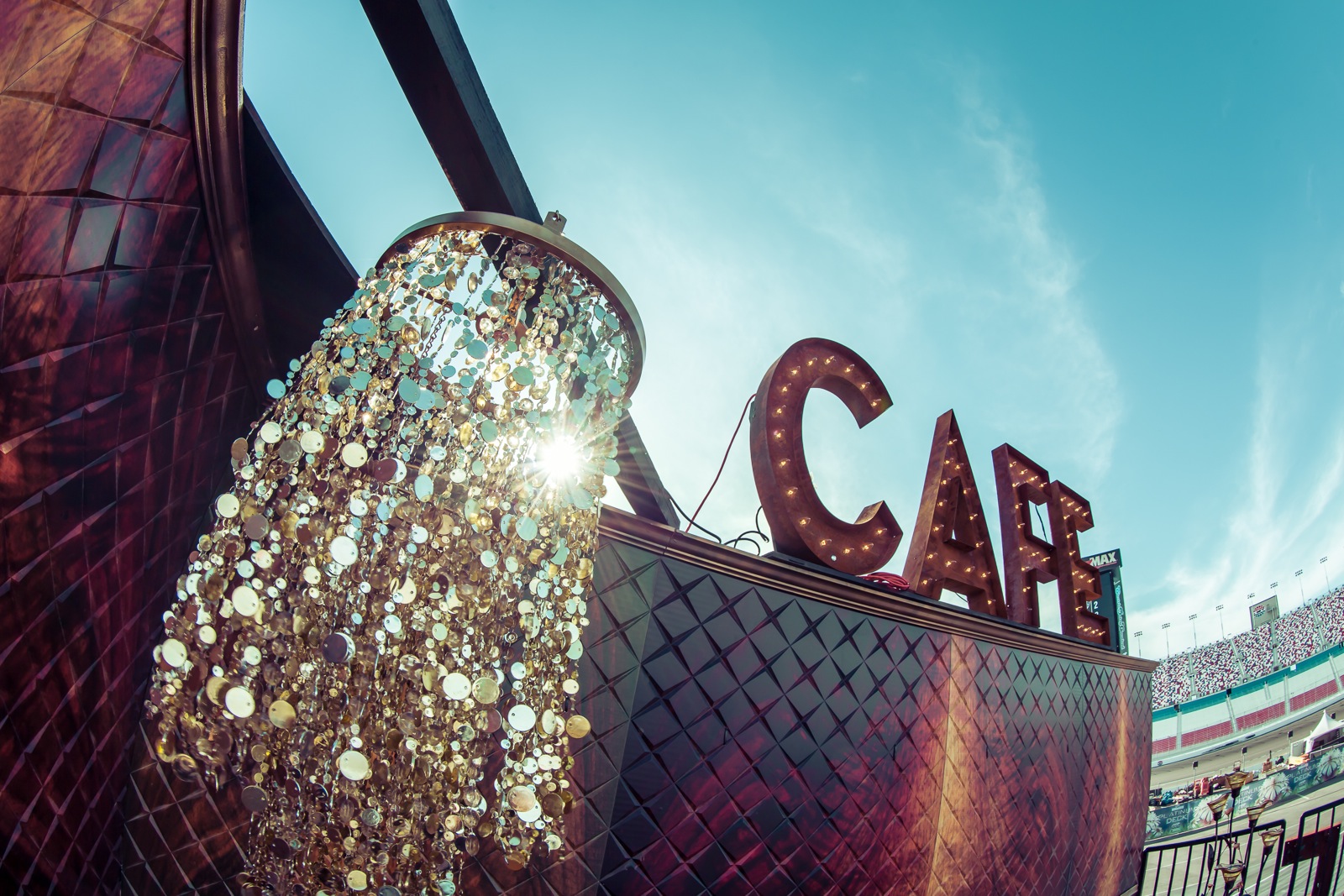 Photo by: Alex Perez for Insomniac

After a long night of partying, sleep is the first order of business. But a yoga class, some fresh juice, and a copious amount of water are a perfect way to prepare you for round two…or three. At Camp EDC Legendary deep house DJ Marques Wyatt and yoga instructor Cristi Christensen provide the perfect balance of sound and movement to heal your body, provide some space to reflect on the previous night’s insanity, and realign you for another night of fun under the electric sky. 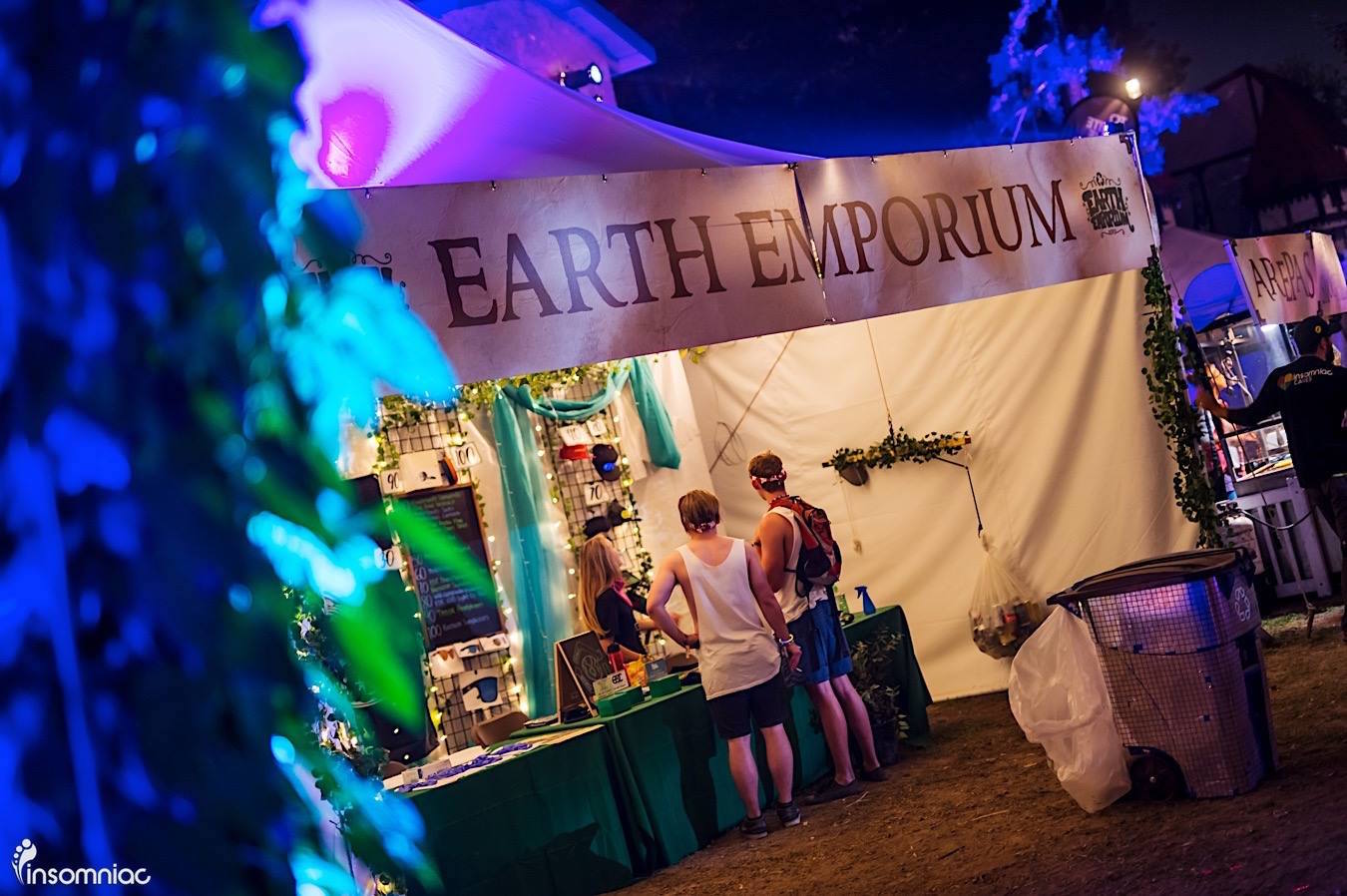 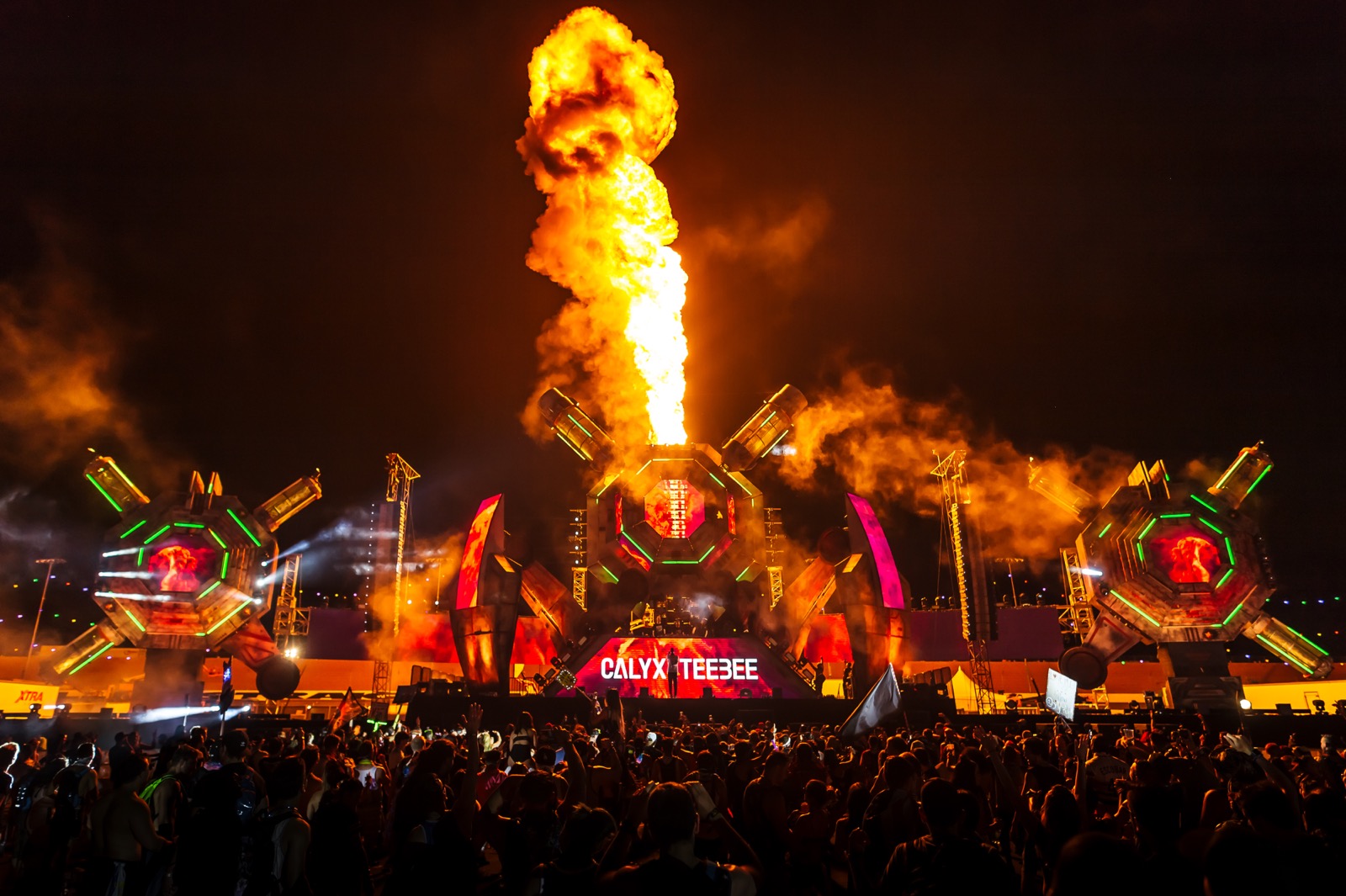 Everything seems to spit fire at EDC: the art cars, the stages and sometimes even the performers. And even though it’s usually hot out, I can’t help but marvel every time I see a bright orange plume fly into the air.

The Gypsy Shrine Girl Gang has a reputation for some of the most viral glitter creations on social media. We found them camped out in the Artist area in 2017 but they are back beneath the Cascada tent at Camp EDC to create the perfect shimmery accent for your bangin’ EDC outfit. 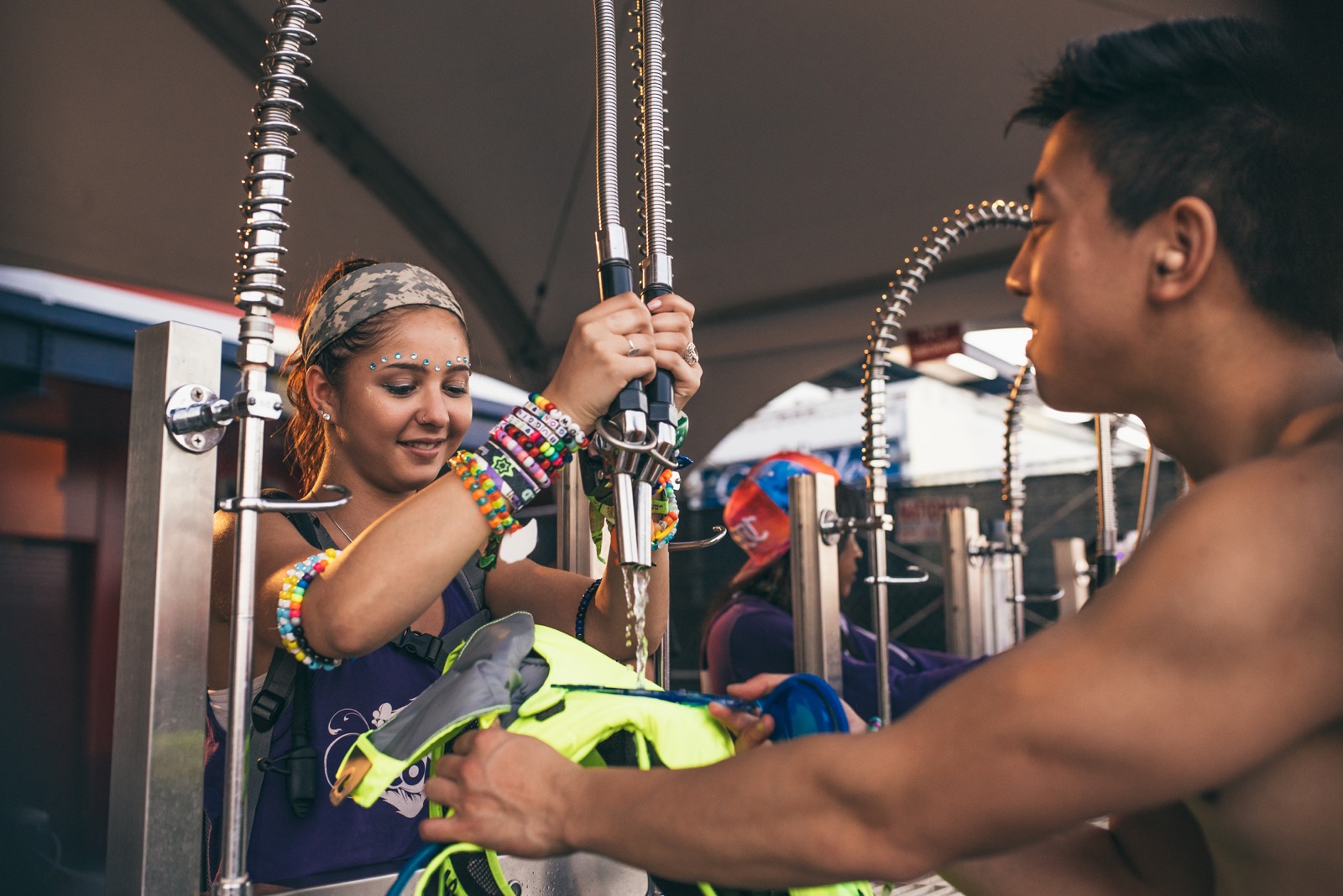 Photo by: Scotch Hutchinson for Insomniac

While EDC isn't during the hottest days of summer any more, Vegas can still experience heat waves in May. Fortunately, Insomniac lets you bring in your own empty water receptacles. Not everyone wants to carry a canteen but you'll definitely see people repurposing water bottles and taking full advantage of the free water. I've never had to go more than ten minutes with an empty container.

Hyped out of our minds!!! #EDCLV2017 starts TOMORROW! 🙌🔊🎉 #upsidedownHOUSE Wile out to the #EDCLV2017 Compilation available now! Link in our bio.

All weekend long in 2017, Insomniac Records held it down at the upsidedownHOUSE with the most diverse lineup of the festival. While many of the stages stuck to a specific format, this stage featured an eclectic group of established and up-and-coming artists, as well as some tidy surprises. In 2017, DJ Paz even brought out Too $hort to perform "Blow the Whistle." I never would have thought I'd see Too $hort at EDC. 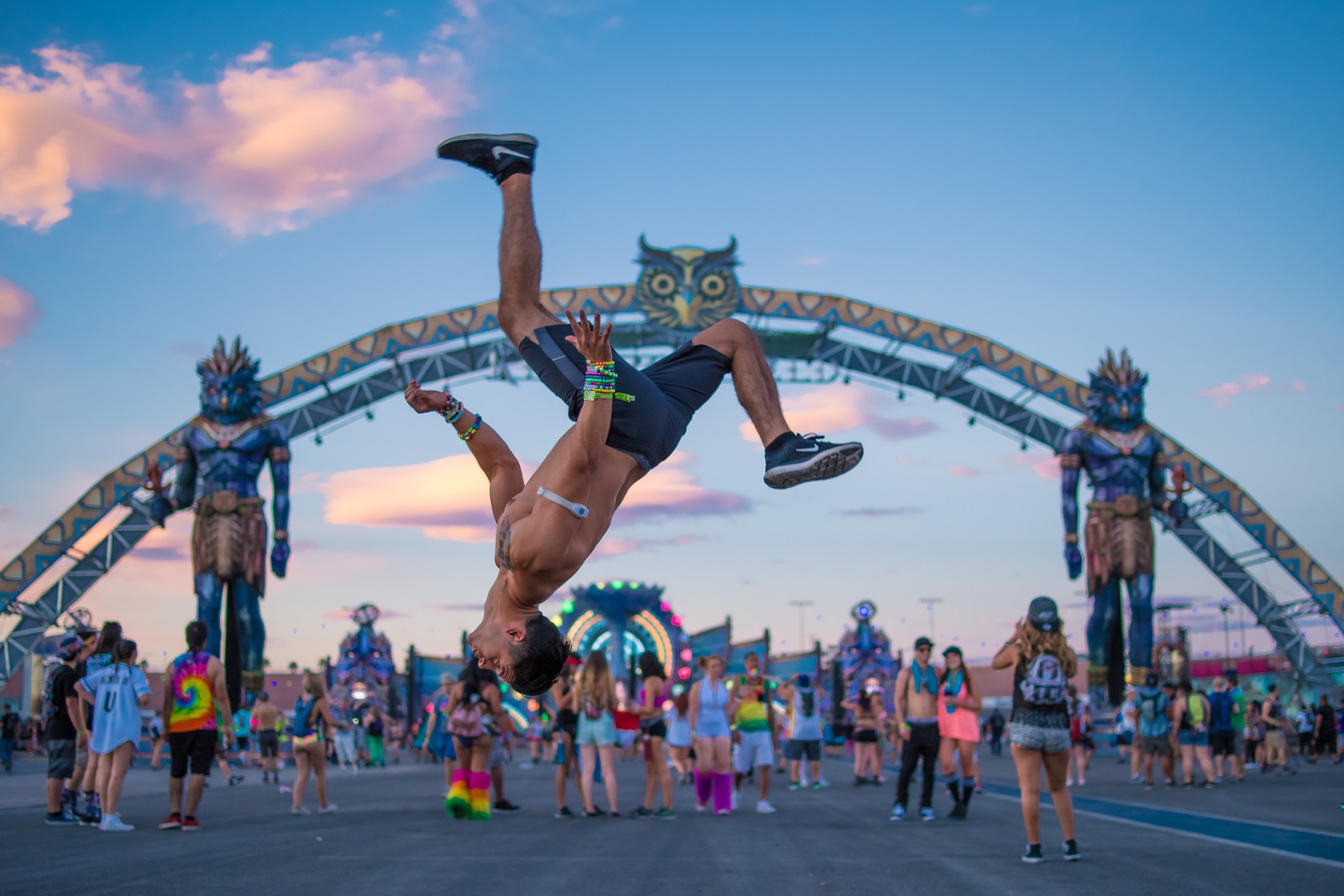 Because I strongly suggest you drink some fresh-squeezed nectar every afternoon when you wake up from your EDC adventures. Trust me, it’s a life saver. 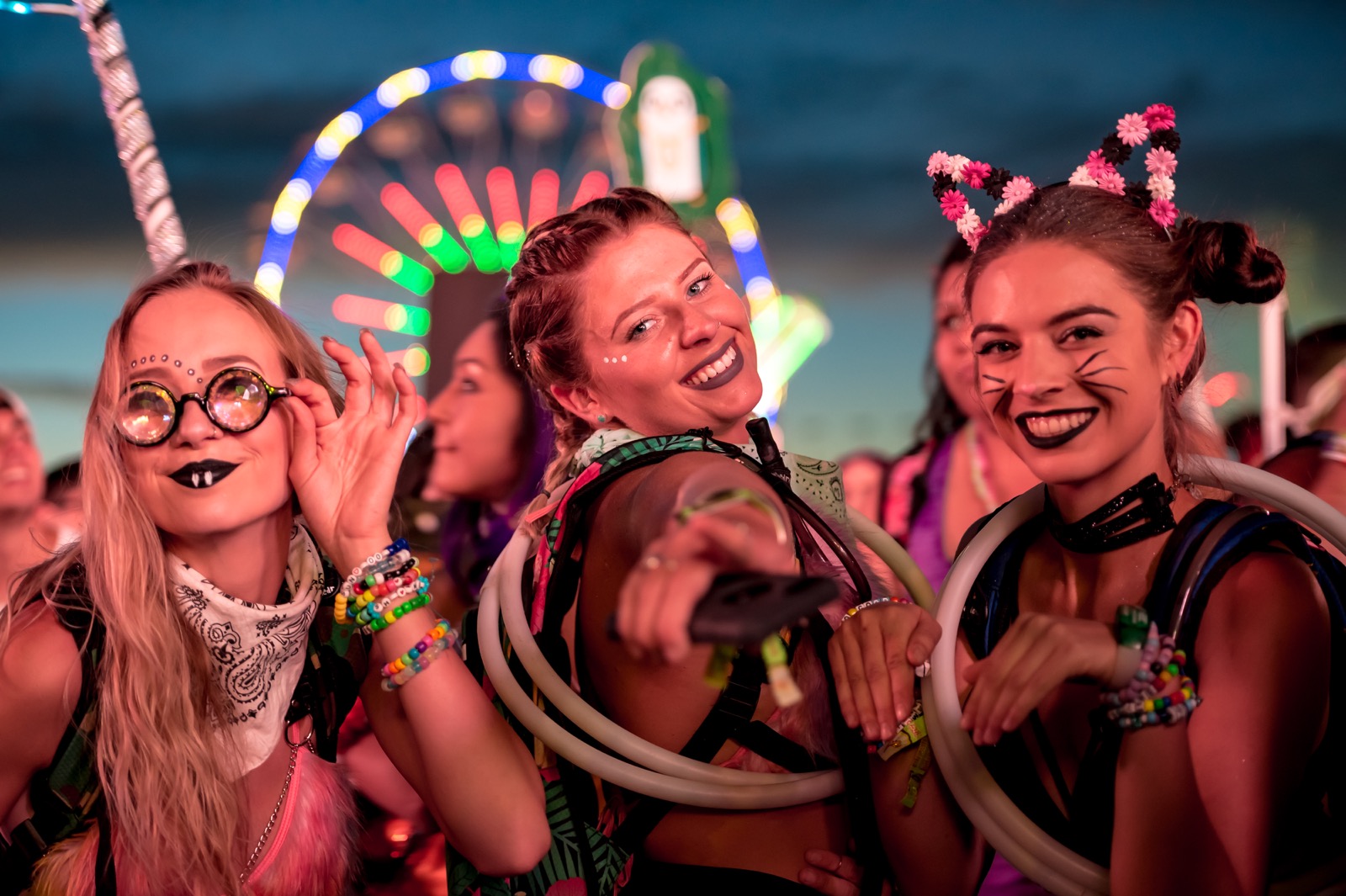 A rave mainstay and a poignant reminder of my early days of raving. It's great to see the kids still rocking and trading those little plastic beads. 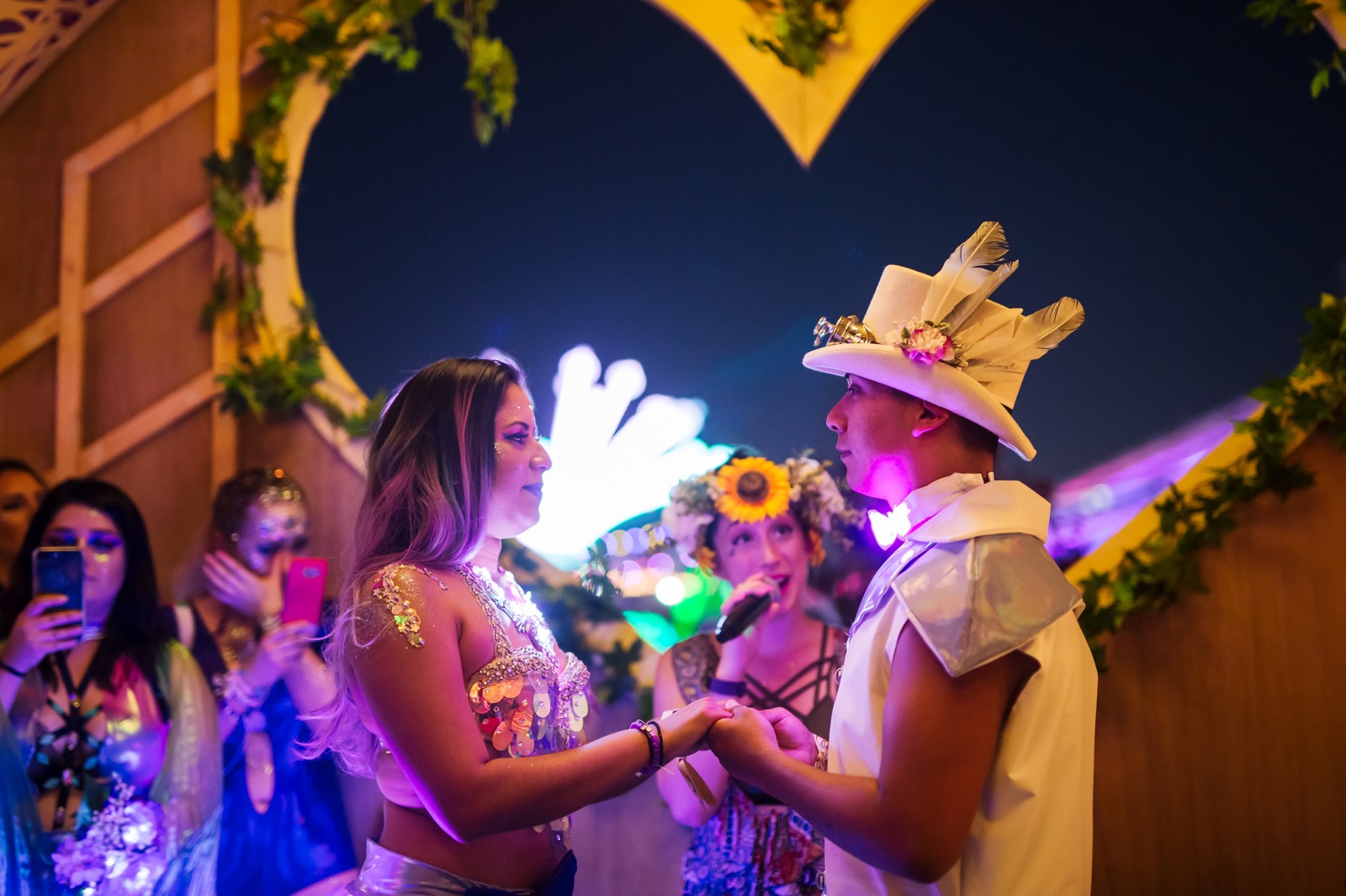 EDC books a lot of weddings in their two chapels, which sit within full view of the lights of cosmicMEADOW. There are two ways to seal the deal: Go the symbolic route in the Chapel of Technology or have a legit legal wedding in the Chapel of Nature. 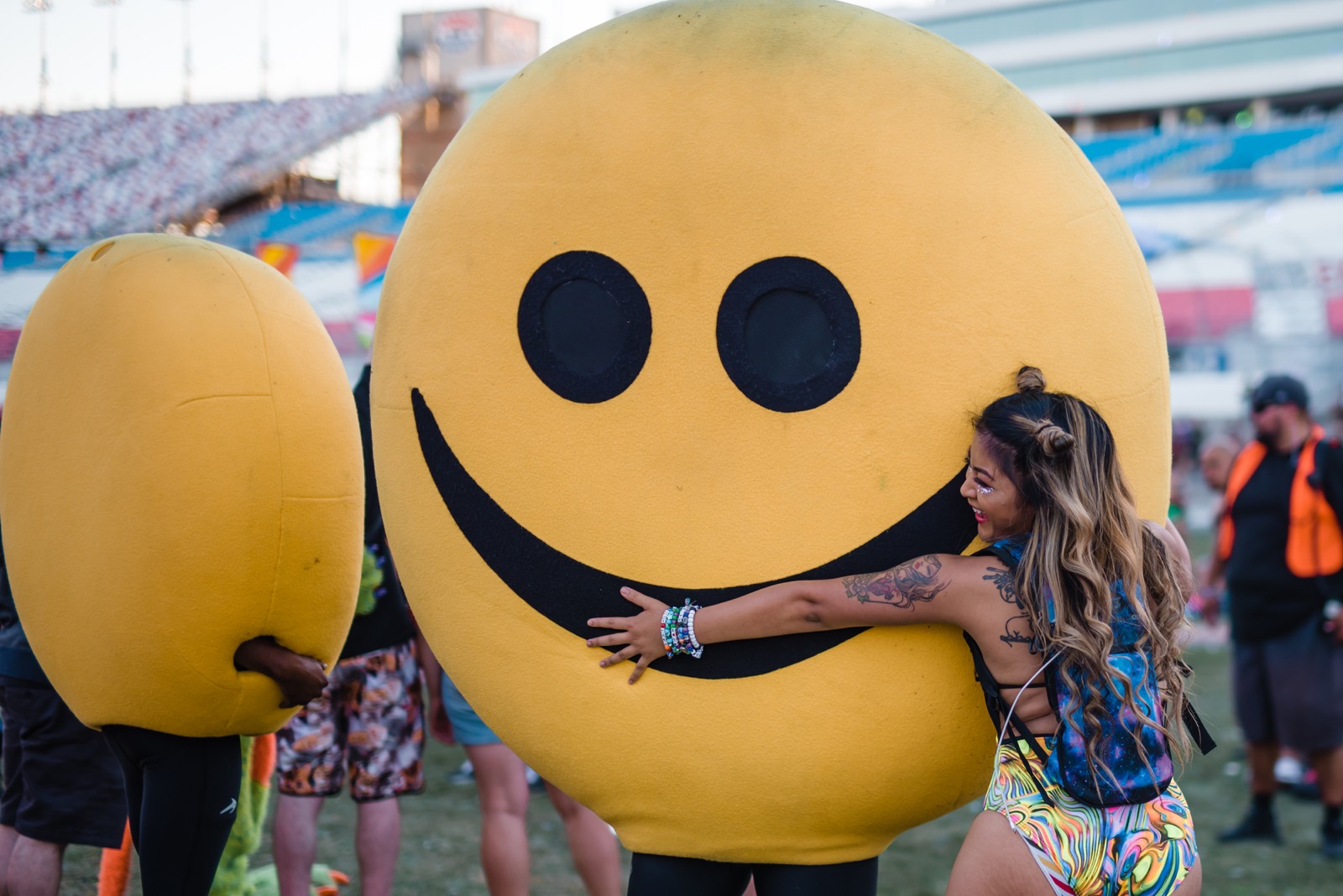 Amidst the sensory overload it can be difficult to find a moment to reflect, or be cognizant of how the EDC experience may be effecting you internally. Luckily Camp EDC can fill your days with activities that can bring you back to the ground. Life coaches, holistic health experts, yoga instructors, and healers all congregate daily throughout the campgrounds to provide you with the necessary tools you need to keep you balanced, focused, and well.

Everything is a spectacle at EDC. There’s a fireworks display at some point every hour. You’re surrounded by carnival rides, crazy costumes and stages that are quite literally larger than life. Once you settle in and allow yourself to become part of it all, you really begin to appreciate the beauty surrounding you. 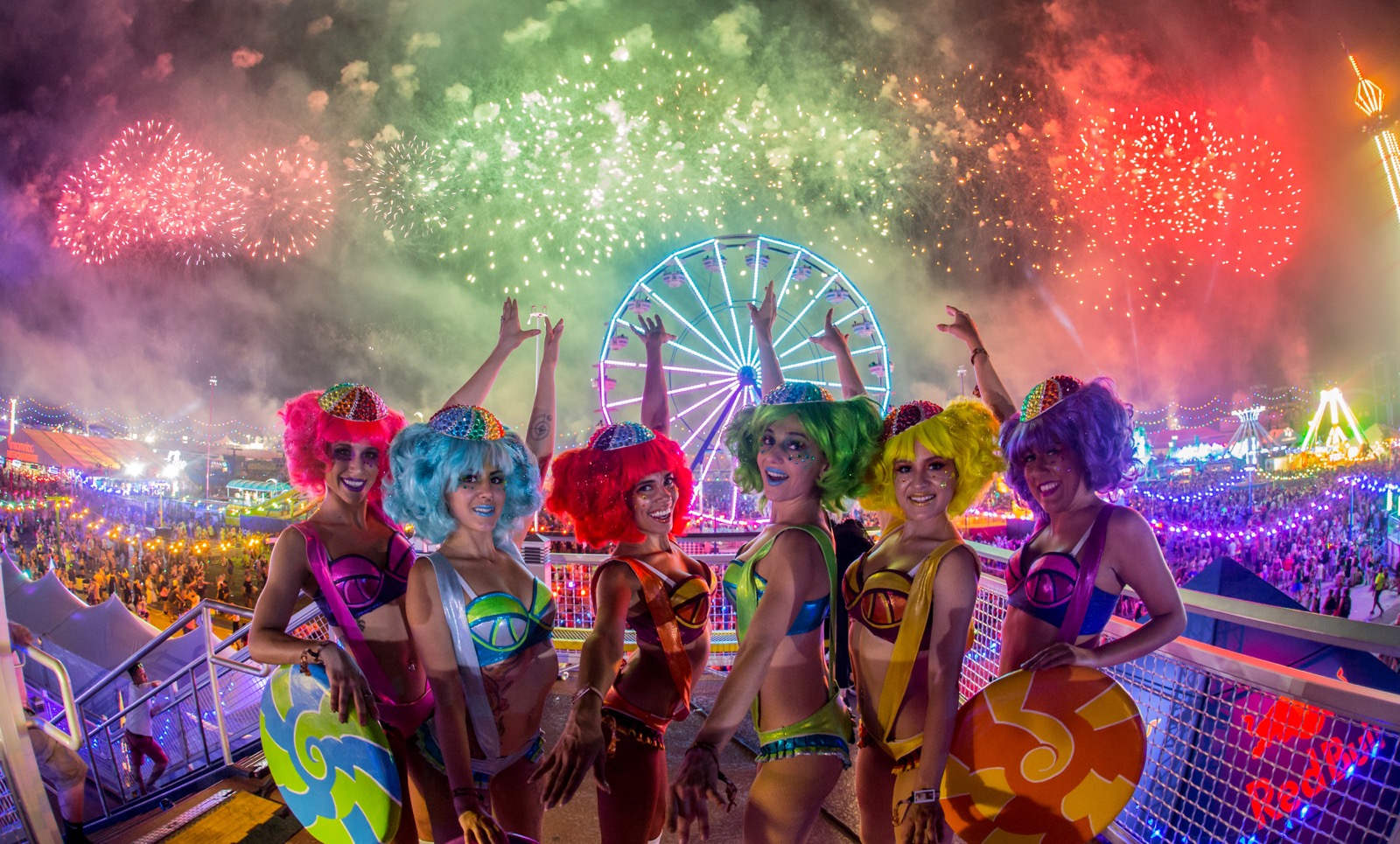 Insomniac has a number of performing troupes that roam the grounds and hype the crowd from the stages. Last year, by far the most breathtaking performance of the weekend was from the human disco ball during Green Velvet’s set on Saturday night.

The Dreamstate crew’s new stage was a complete success in 2017. Trance has a new home at EDC, and by all accounts it is sweet. 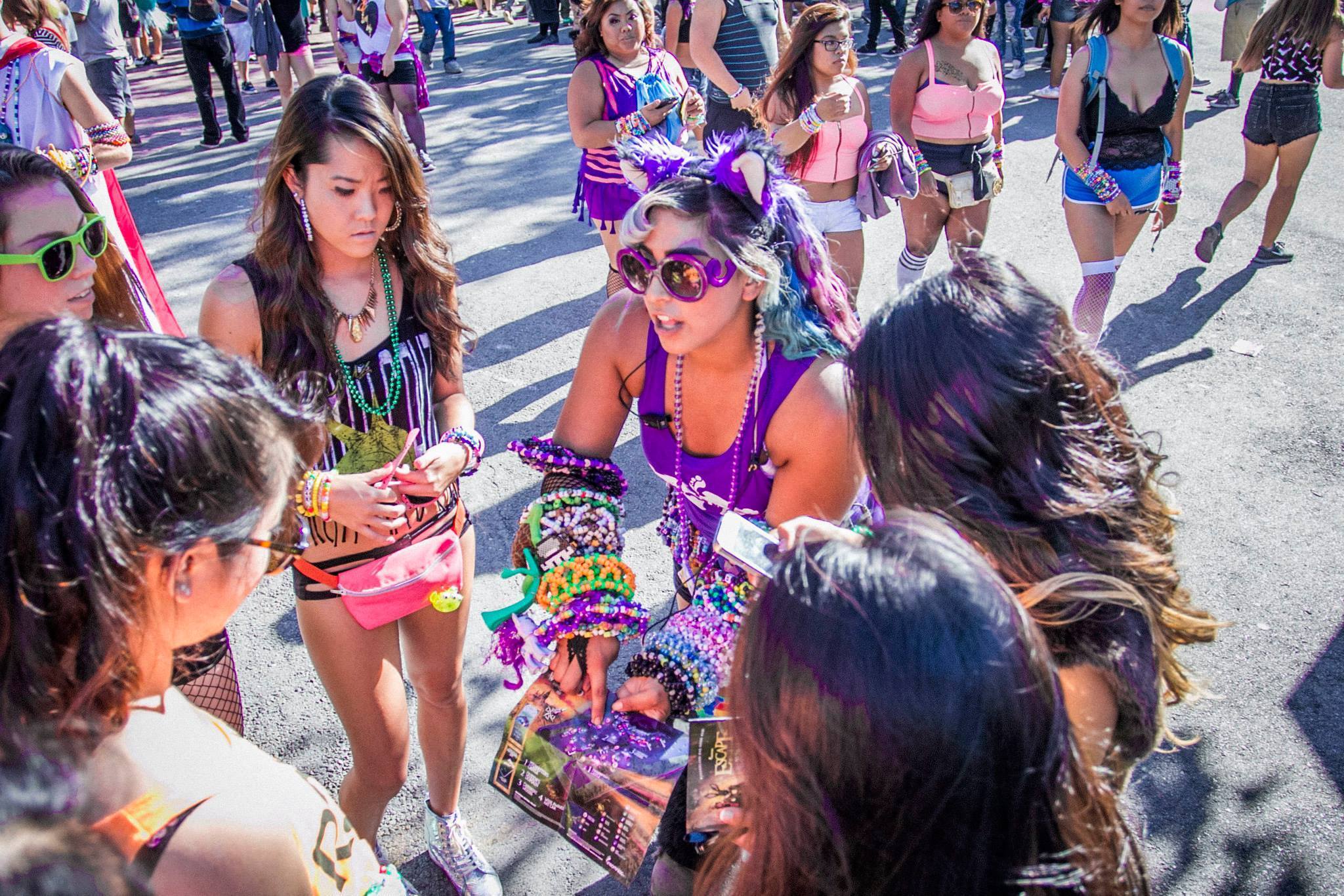 In 2017, there were two instances I ran into where someone looked like they needed help. I noticed a girl with her friends start to have a falling out. A security guard was quick to respond and help, and as I walked away I noticed someone from Ground Control (Insomniac’s ambassadors in charge of happiness, health and hydration) walking by; I let them know and they rushed to the scene. Again, a few minutes later in the VIP section, a group of friends were having trouble helping their friend and not only was a nearby security guard incredibly quick to respond, the four or five guards who arrived afterward to help were attentive and respectful in dealing with the issue. Whatever the case, EDC staff is always on top of things so that attendees feel safe.

Corona's Electric Beach served as a tiny desert oasis, complete with a pool. Granted it is only large enough to hold one floatie, but you will find people using it to cool off from the heat throughout the weekend. The tiered stage setup resembles a beach villa and offers one of the best views of the fireworks at EDC. It also has a slammin' lineup.

EDC opens extra early (usually at 3 pm), and that's be a way to avoid the major rush that hits between 9-11 pm. Insomniac has procured shuttles from all over the country to increase the fleet by 50%, and there are even more stops than recent years so it’s even easier to get to them from your hotel on the strip. The shuttles will also be pre-screening Headliners, so there are shorter waits in the lines upon entry. TL/DR? Arrive early (or late), avoid driving (or carpool), or book one of the offical EDC shuttles to save yourself a massive headache. 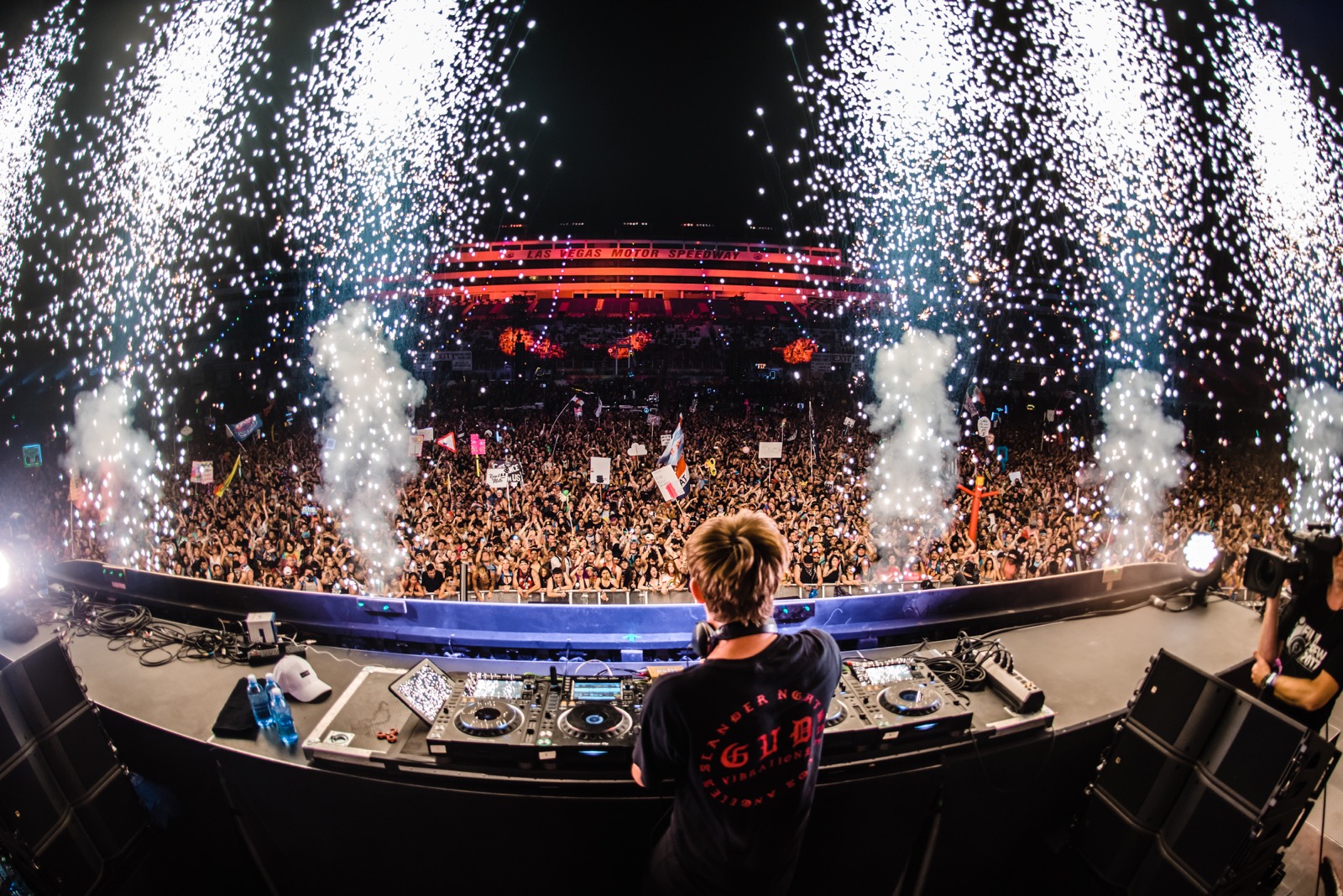 There is a certain beauty in seeing tens of thousands of people move in unison during a rather large drop. 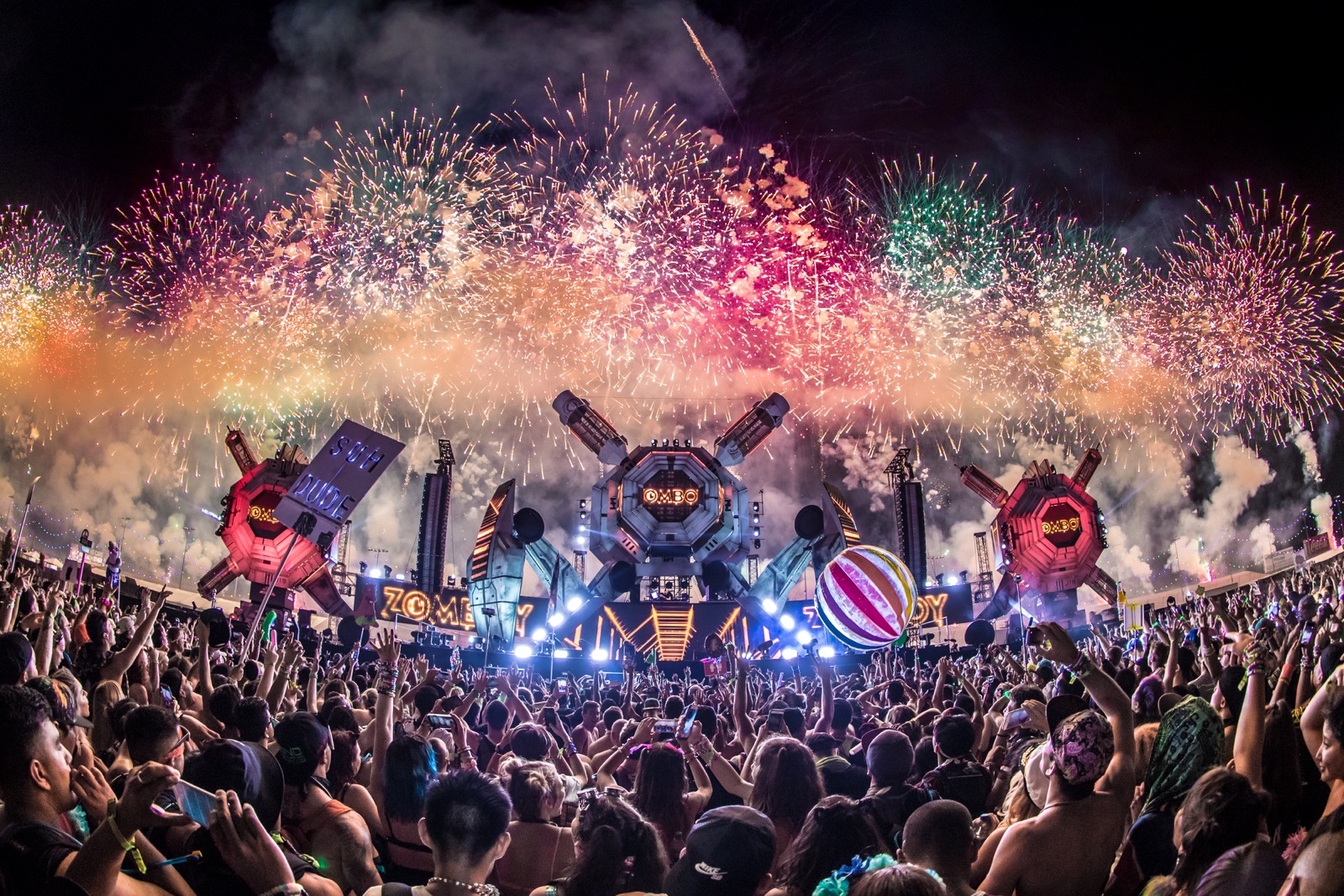 EDC is loud! Even the smallest of stages have big, big sound systems. I'm thankful to own a pair of custom fitted earplugs, but even the foam disposable ones were totally necessary almost all the time, as there is music everywhere you turn. I want to keep going to festivals for as long as possible, and to do that I need my ears running in tip-top shape. Don't damage your hearing, protect it ! 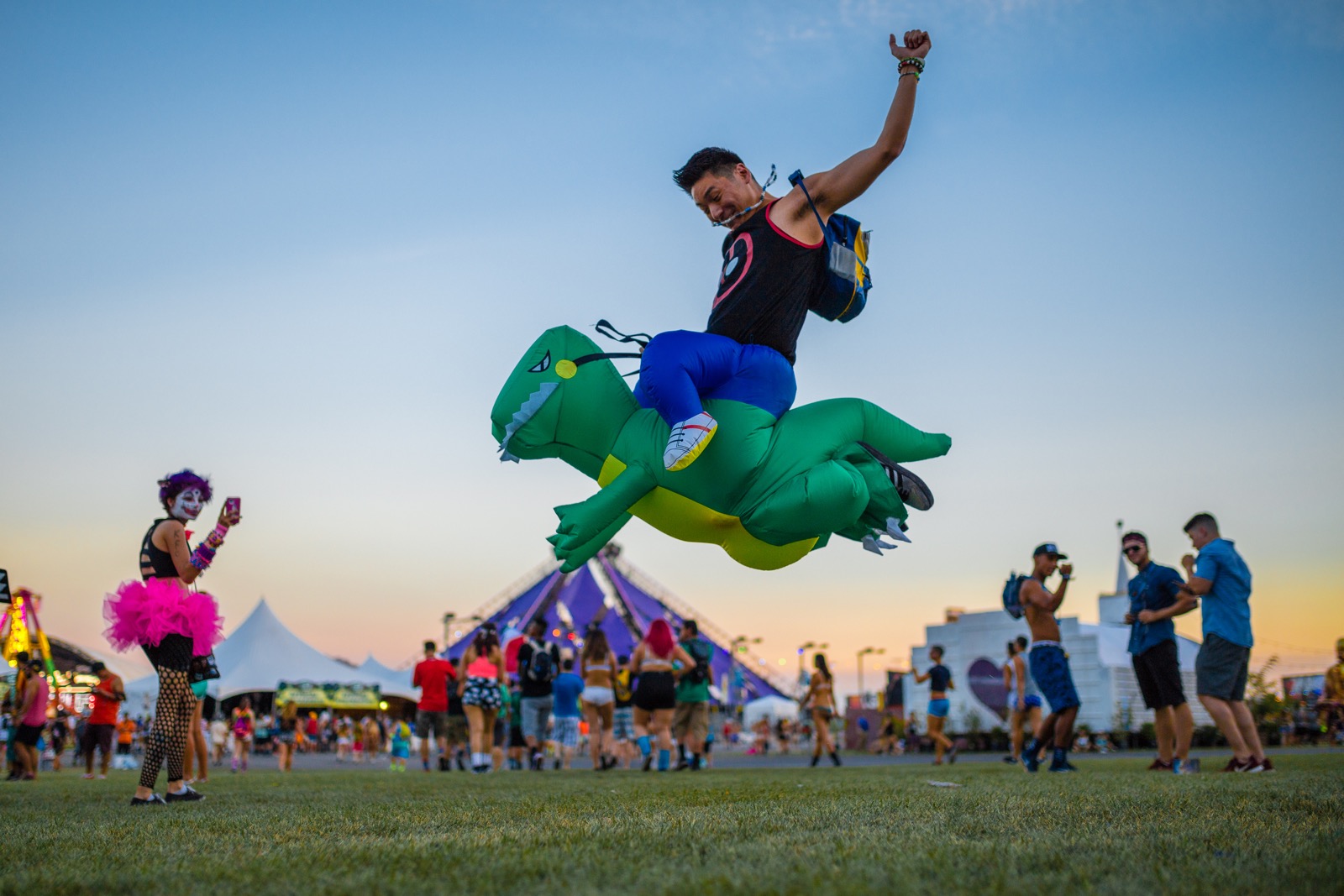 Day One for us is all about getting our bearings. You'll wander and explore, and even though you might barely manage to stick with a stage for more than 40 minutes at a time, you'll have an incredible time discovering the tiny details of the festival. By the time you come back for Day Two, you'll be ready to roll and will feel like experts.

The inaugural Camp EDC has gone all out in offering a plethora of activities for campers. There’s a clear focus on wellness, possibly meant to bring some balance to the sometimes debaucherous activities that go on as the sun begins to fade from the sky. There are so many yoga classes being offered that whatever it is you are into, or maybe looking to try, there something right at your level. From Vinyasa with a live band to Acro Yoga, and Silent Sevasana, which is essentially a safe space to enjoy some peace while doing a meditation or just enjoying the silence for an hour. It’s evident that bringing some of the transformational aspects found at other festivals to EDC is part of the aim of Camp EDC’s day time activities.

Hopefully I’ll “Z” you next year!