The Best Hotel in Cappadocia 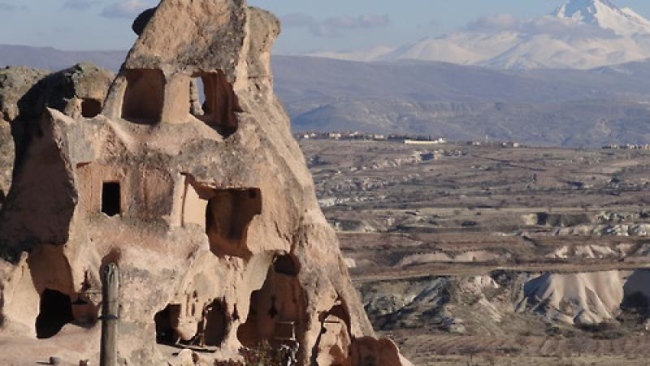 The Argos Cave Hotel in Cappodocia has stunning views.

So, I was told I’d be staying in a cave hotel in the Cappodocia region that is world-renowned for its otherworldly geological formations. A cave hotel? Get this, they called it a boutique cave hotel. Damn, they’ll throw that “boutique hotel” phrase on anything these days including a cave! On the drive to Cappadocia, I spotted an industrial city named Batman on the Turkish map. We almost made a beeline for Batman because I wanted to see a bat cave if I was going back to my caveman roots.

Instead, when we arrived in the tiny hillside hamlet of Uchisar, I experienced a feast for my eyes as the Argos Cave Hotel was just this side of living in a mansion. Only opened three years ago after the restoration of a monastery and series of cave buildings that date back to the 6th century, I had no idea this 42-room luxury hotel had been featured in Travel & Leisure magazine as one of the best new hotels in the world in 2010.

I was given a tour by the cosmopolitan Merve Uzel, the Guest Services Manager, and marveled at the rock outcropping seen in the photo above that houses some of the agricultural team (there’s a large working garden for the kitchen on-site) on multiple floors throughout the rock. A few of the guest rooms have swimming pools inside and all of them have beautiful, textural walls that have been created out of the rock. The restaurant, Seni, is a standout in a town that’s lacking good restaurants plus it has a quaint bar and even a cigar bar, all with stunning views of the geologically odd-looking valley below. Check out www.argosincappodocia.com