What's the Connection Between Bali and Burning Man?

Earlier this year, a woman unexpectedly asked me this question from the audience. She’d done her homework and knew that these were two of my natural habitats. I’ve been to Bali eleven times in the past eighteen years and ventured to Burning Man six times in the past dozen (joining the Board in 2011). What is it about these two very different places that lights me up? And why is it that so many people feel the same way? The landscapes couldn’t be more different: Bali is tropical and damp, while Burning Man can feel like an endless, arid desert.

Channeling my inner Margaret Mead, here’s my stab at understanding the connection:

The ultimate testament to one’s Balinese life is their death, with the cremation ceremony being the crescendo experience. Of course, Burning Man’s name defines the core experience: the burning of the effigy on Saturday night and then the temple on Sunday night (where we pay tribute to people, animals, and even attitudes that are no longer with us…or no longer wanted), as well as most of the temporary art structures throughout the desert “playa.” In 1986, Burning Man founder Larry Harvey burned a representation of himself on a San Francisco beach with a small group of friends so that he could rise from his own ashes after experiencing a devastating romantic break-up. Similarly, the Balinese believe in reincarnation and that’s why the cremation ceremony is such a celebratory experience, as it means their beloved will be coming back to them in a new form. There’s something tribal and primal in these Balinese and Burning Man fire rituals, based upon impermanence, far from the mourning and sadness that pervade the death and dying experiences of many cultures.

2. It Takes a Village

Having grown up as a rugged American individualist, my first experience on Bali was full of deep culture shock. The greatest achievements on this island paradise were collective, not personal. If competition exists, it’s primarily with other villages, yet cooperation is essential and has built both a collective culture and a set of rice paddy fields (that allow the mountain springs to filter down to the ocean and provide that fertile green that is Bali’s trademark color). Burning Man’s theme camps are also village-focused. To build a city of more than 60,000 people requires intense cooperation (Burning Man’s Department of Public Works is probably more adept at their temporary jobs than their counterparts in most similarly-sized American cities). And, just as the Balinese give offerings to the Gods and plentiful feasts to their fellow villagers at various villages celebrations, Burning Man’s currency is based upon a “gift economy” in which everyone offers something to their neighbors, from Bloody Marys after a long night of partying to free massages or Hula Hoop lessons. Both Bali and Burning Man are about as un-American as you can get.

3. We are all Artists

I’ve been told the Balinese don’t have a word for “artist,” yet art is so prevalent in their culture. The Balinese are encouraged to create and explore at such a young age that there’s a palpable lack of self-consciousness when it comes to how they approach art and design and, thus, it’s one of the most vibrant and colorful cultures in the world. Similarly, one of Burning Man’s 10 Principles is Participation. On the playa, we are not spectators. And, the most unifying quality amongst “Burners” is the sanctity and reverence for artistic expression. Later in his life, psychologist Abraham Maslow created a seven-level pyramid that added two layers above self-actualization: aesthetics/beauty and self-transcendence. Abe must have been Balinese in a past life and I’ll bet he would have been a Burner in this life if he hadn’t died a decade and a half before the first Burning Man.

In my default world away from Bali and Burning Man, life is a constant wrestling match between head and heart and mind and body. But, in the desert and on that Indonesian island, what predominates is my soul. And, invariably, whatever may show up in either environment – from anxiety to adulation – there are themes desperately seeking more attention in my life. This kind of magnifying mirror can be both awkward and uncomfortable for some, but for me, I find that these two habitats bring me face-to-face with what I need to be dealing with in my life.

I started a company 25 years ago (a year after Burning Man’s first year on the beach) and called it “Joie de Vivre.” My primary focus was on how my boutique hotel company could create joy for our employees and customers. Bali and Burning Man create “collective joy” and a celebratory atmosphere whether it’s the daily supply of village “odalan” festivals in Bali or the theme camp parties in the desert. Bali and Burning Man cultivate a youthful spirit where you get to dress up in wild, colorful costumes and play with the un-self-conscious freedom of a child. In fact, an animistic or pagan belief system – in which everything has life in it – is prevalent in both cultures.

One of the highlights of my 2012 Burning Man experience was joining the daily Monkey Chant in the Nectar Village camp. Hundreds of Burners spent ninety minutes learning how to do a group chant and dance that resembled the Balinese Kecak Dance and Monkey Chant. And, because Burning Man is all about confusing and fusing cultures, that night I also went to a Gamelan (Balinese orchestra) and Tequila party that was an ode to collective joy. 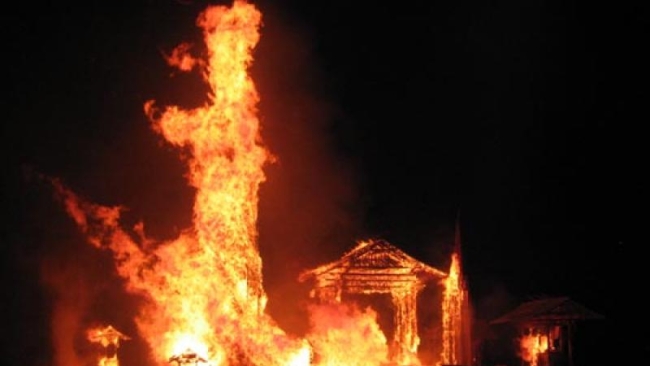