Who Goes to a Whirling Dervish Festival Commemorating Rumi?

When I first heard of this festival in central Turkey where the poet Rumi lived his final years and is buried, I was certain there would be charter jets from San Francisco or Boulder, Colorado. C’mon , books have about Rumi have outsold every other poet out there in the modern world and it seems like every New Age wedding has the gratuitous Rumi poem.

What I found was quite different than that? First off, let me paint the city landscape. Konya, Turkey is the most conservative major city in the country (7th largest with over 1 million residents). While much of the most interesting architecture comes from the Seljuk period of the 13th century (which is when Rumi was there), this place also feels stuck in the 1970s/1980s when it comes to most of the buildings in town. It’s not cosmopolitan, there are no bars in town and restaurants don’t serve alcohol, and 95% of the women are in burqa or head scarfs. Yet, I still thought there’d be a bunch of westerners, at least western Europeans.

My revelation is that Rumi is revered as much more than a poet in this country as he’s seen as a philosopher and, for some, a prophet. So, of the 100,000 visitors who came for the ten-day festival, at least 80% of them were from Turkey. This is an authentic, indigenous gathering that, in many ways, makes it even more culturally fascinating. In the west, we tend to overlook Rumi’s Islamic message although a scholar on this trip told me that 10% of the lines from Rumi’s poems are taken almost exactly from the Koran. In sum, you might come here to marvel at the whirling and to pay homage to Rumi, but this festival will teach you more about modern Islam than you ever imagined. If I lived here, I’d go in the head scarf business.

For more information on Konya and modern Islamism, I’d recommend novelist Sinan Yagmur’s trilogy, Tears of Love, and listening to an American Public Radio broadcast “On Being” focused on Islam’s perspective on Rumi. 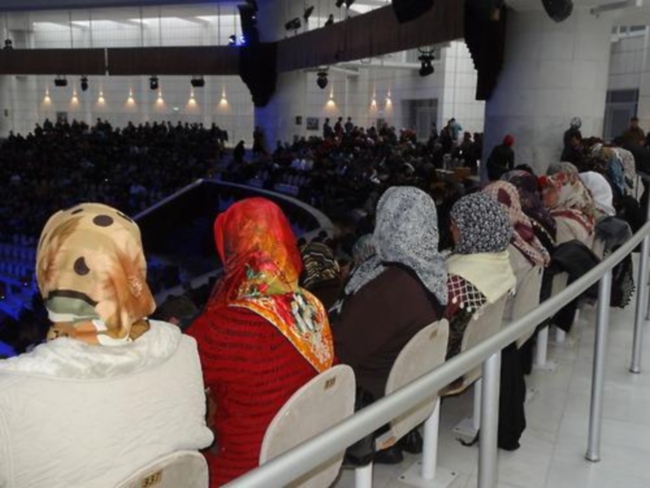