It’s easy to focus on the shitty part of festival toilets. You wait a super long time for the joy of trapping yourself inside four plastic walls surrounded by aromas that'll torch your nostril hair. That gray triangular thingy will expose you to the world if not latched properly. Toilet paper? May the force be with you. But it’s a festival fact of life that you’re going to have to use them at some point if you drink water or eight pints at a festival.

But instead of focusing on porta potties that suck, let's look on the bright side (brighter than that roll of translucent one-ply you have a slim chance of finding), and talk about the times they didn't. Festival organizers know that using the bathrooms can really take the piss out of a pleasant afternoon, but a few special humanitarians have plugged the holes and made portaloo magic.

Austin City Limits ' gilded commode is for the blessed few who won their way in. To sweeten the pot, those lucky whiz kids were each given ten golden tickets to share the wealth upon arrival. That's some royal gifting responsibility right there... For those who like the finest visuals on hand to pass the time, festival organizers installed livestreaming cameras so you don't miss a moment of action, along with scented amenities, Egyptian toilet paper, wi-fi, and freakin’ air conditioning. "Golden throne" has officially reached new heights.

Life is Beautiful: "The Porta-Party"

Of course, it's Vegas' Life is Beautiful Festival that ups the game with a disco 'loo fit for royalty. The most you can generally expect from these WCs are a few squares of scratchy TP, and sore glutes from squatting. Not from this technicolor throne. Need sunscreen, condoms, glow-sticks, candy, wet wipes, glow rings or chapstick? Please, help yourself. But only after you're done taking a perfect selfie in the latrine's "Perfect Selfie Station." (Just make sure you pull that sweet onesie up first).

Glastonbury: "Loo With a View"

Would you pee in a box where everyone could see you? Attendees who came across the mirrored-glass toilet from Water Aid in 2015 had a tough time shaking the feeling that people were watching them, even though passersby were just checking themselves out in the exterior's mirrored glass. No one could actually see inside. Water Aid's goal with this shone throne was to raise awareness of third-world countries who lack basic hygienic privileges, and don't have the luxury of peeing in private. The org was also responsible for this year's "Talking Toilets." In addition to increasing awareness of the lives of others, Glastonbury gets science involved on the front lines of toilet innovation with their composting latrine system that harnesses energy from human waste.

A master of ceremonies at Sasquatch in 2013, Nick Offerman gives us the rundown on porta-potty facilities and offers up valuable life lessons on how to appreciate fine American plastic toilet craftsmanship, following polite aiming protocol, and vital "Thunder Closet" safety.

If pranksters are your people, there's no better place to be than Black Rock City. Burning Man's status as a civic experiment encourages lots of probing; like everything else, lavatories become laboratories. Each year, Black Rock City Animal Control gives an unsuspecting Burner a portaloo experience they'll never forget. Once the person's entered their stall, the crew moves quickly to roll out a red carpet, gather a silent crowd and shower the person with applause to the sounds of Queen's "We Are the Champions" when the door opens. I've been fortunate enough to stumble on two of these unfolding pranks, and the BRCAC seems to pick people who can laugh at themselves and go along with the joke, as their chosen one demonstrates above.

Creators of that famed "No Pants Subway Ride" and grade-A gagsters, Improv Everywhere is a New York-based comedy troupe responsible for pranking the masses at Governor's Ball in 2013 and 2014. Unsuspecting "victims" had fright of their life as they thought they were simply opening the door to relieve themselves...

Specific initiatives for women's resources at festivals has ramped up in recent years, with events like Electric Forest and Glastonbury installing women's-only safe spaces. In 2011, Roskilde Festival got on board by enlisting Copenhagen design studio UiWe designed Pollee to try and make nature's call a little easier for women. Instead of the frontward facing urinals designed for men, designers constructed pinwheel-style urinals, easy to straddle and arranged in cluster of four, for women needing a quick squat. (That same year, men got the cutting-edge toilet treatment with urinals affixed to trees to promote sanitation and prevent damage to the trees). 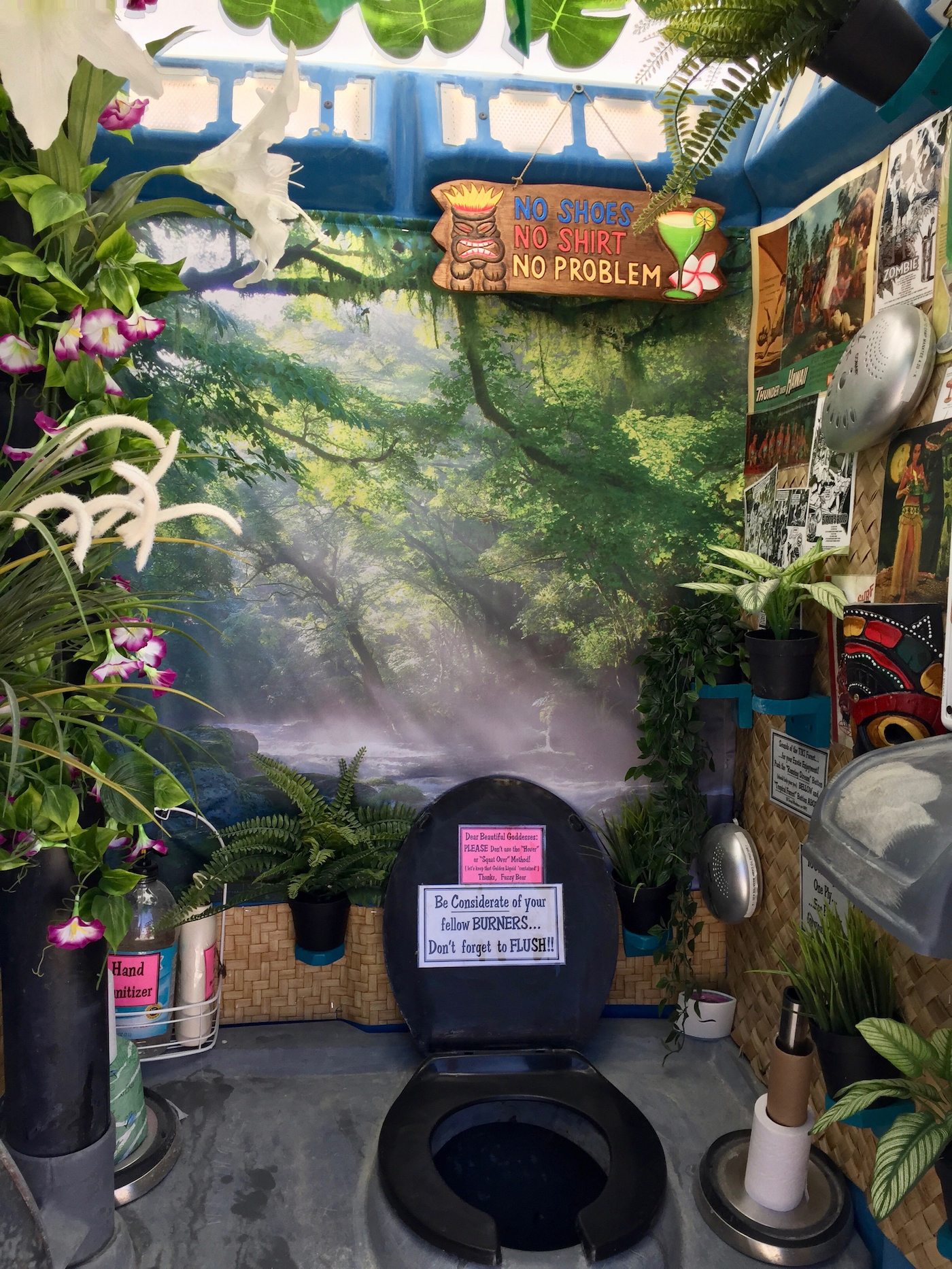 Imagine trudging to the nearest porta potty on the Playa, covered in dust and sweat, looking for a little relief but also dreading what gnarly scene might await you behind the porta potty's closed door. Then imagine opening that door and being greeted with a soothing, lush tropical paradise deceptively lurking within the confines of a festival porta potty. It's like you've stepped through a portal to the Hawaiian Islands. Stuff like this pops up all the time at Burning Man (this one in particular was near 4:30 and I in 2017), which definitely adds to its already quirky charm. It is one of the world's largest outdoor arts events, after all – and we'd definitely call this beachy masterpiece a work of art.

See? Toilet terror doesn't have to be the norm. Any other rad porta potties we should know about?