For six years, Genius Loci Fest has combined music, yoga, and surf culture for its intimate, inimitable celebration of the sun, the ocean and sonic bliss along the California-Mexico coast. In that time, it has become one of the most well-respected conscious gatherings on the West Coast, thanks to its dedication to forward-thinking lineups, cultural awareness, and a fierce leave-no-trace ethos — and it’s the only festival in North America where you can surf to your heart’s content as the pulse of DJ performances wafts out into the waves.

Speaking of forward-thinking lineups, the festival announced the initial 2018 music lineup today, and it’s one of the most women-forward rosters we’ve seen this season. Held from June 21–25 in Baja, Mexico, Genius Loci will welcome high-octane bass sorceress TOKiMONSTA, Brooklyn-based tech house boss Kim Ann Foxman, Los Angeles’s legendary dust queen Tara Brooks, and the worldly, shapeshifting duo KMLN to its headlining spots. And with such strong showing already in this first phase, we have a hunch even more females will show up in Genius Loci’s subsequent lineup reveals. 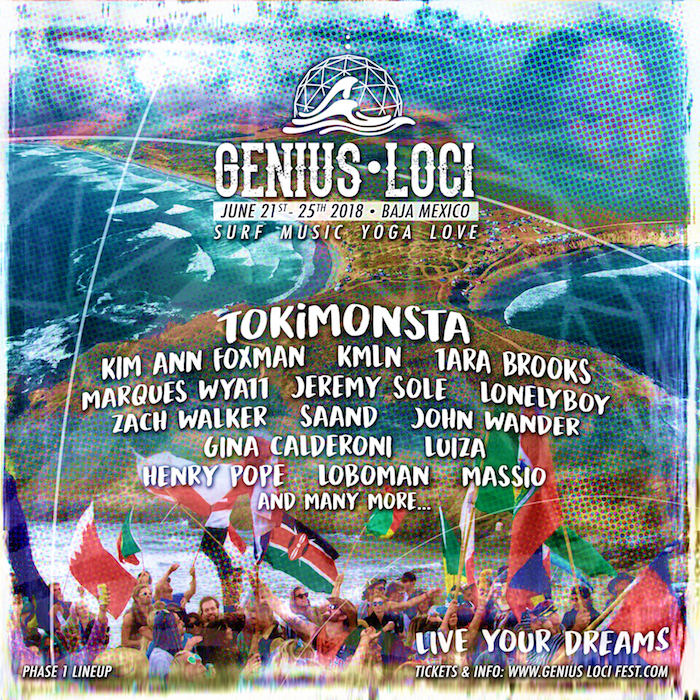 “This year is really about two things,” says Genius Loci Festival Co-Founder Henry Pope. “We want to bring together a wide lineup of amazing music, but we also want to showcase female headliners as a living tribute to all the badass musicians who ever had to answer antiquated interview questions about ‘what it’s like to be a girl in the music industry.’ This year Genius Loci is here to reset the status quo. We’re here to prove the future is female.”

The fest also maintains a firm commitment to positively impacting the local community. Food, clothes, socks, and art supplies are just a few of the items contributed to charities in the area by the event. As a “pack it in, pack it out” event, all single-use plastic is banned, and participants are asked to be lead by example in acting as stewards of our planet.

Passes for Genius Loci 2018 are already 70% sold out so grab them while you can, as they’re expected to sell out well ahead of the event.