Let's face it: The element of surprise keeps getting harder and harder to cultivate in the festival world, as events try to outdo each other with more of this and even bigger that. Bucking this exhausting trend is Okeechobee Music & Arts Festival, who, in the great tradition of affiliated festival Bonnaroo, knows that sometimes indelible, unforgettable experiences can still be had through damn good live music.

Enter Okeechobee's PoWoW!, which, akin to Bonnaroo's now-legendary annual Superjam, brings together a swath of the best in the game to create an on-stage choose-your-own-adventure novel in the form of an epic jam session every year. The festival just announced this year's PoWoW! lineup, and it looks like it's gonna be hell of a ride. 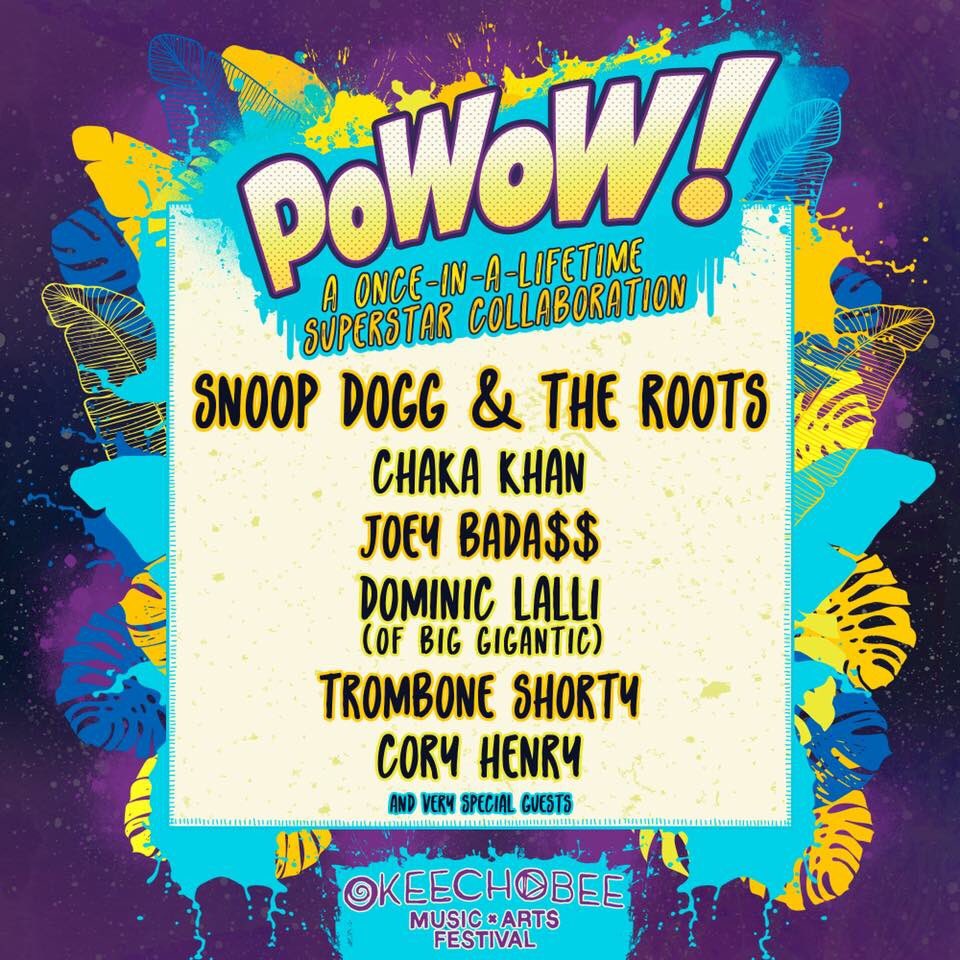 Session leader Snoop Dogg is a stone-cold pro who can play any festival from Essence Festival to upscale, wine-and-food focused Bottlerock Napa, to the Cannabis Cup; he knows how to get any kind of audience on its feet. The Roots? Well, they're improv masters thanks to their innate talent, of course, but also thanks to their extensive work as Jimmy Fallon's house band. The Queen of Funk, Chaka Khan, will bring plenty of heart, soul, and old-school diva flavor to the operation with her powerhouse vocals. Rounding out the megawatt lineup will be rap's breakout star Joey Bada$$, Big Gigantic's saxophonist Dominic Lalli, the exceptionally talented New Orleans' multi-instrumentalist Trombone Shorty, and jazz great Cory Henry, will all perform together. In true Okeechobee fashion, additional surprise guests will be sure to make an appearance on stage at the signature PoWoW! event.

Now in its third year, the much-loved festival has already begun building a legacy around its PoWoW! lineups, which quickly became known for their versatility, diversity, and caliber of talent. Those previous PoWoW!s have featured Solange, Michael McDonald, Gallant, and GRiZ (2017) and Miguel and Win Butler of Arcade Fire, along with John Oates (of Hall & Oates), Preservation Hall Jazz Band and Kamasi Washington (2016). Really, there's almost nothing better than watching superstars like these get on stage, break away from their usual set lists, and have a blast doing it.