The 14 Rock Festivals You Should Attend in 2017

What makes a truly great rock festival? The quantity of legends and icons? A narrow focus on sub-genre? An epic backdrop, with even more epic pyrotechnics? Complementing amenities? There’s no simple formula, but these ten festivals—ranging from international staples to American upstarts—should be on the bucket list of any adventurous festival junkie who likes it loud. 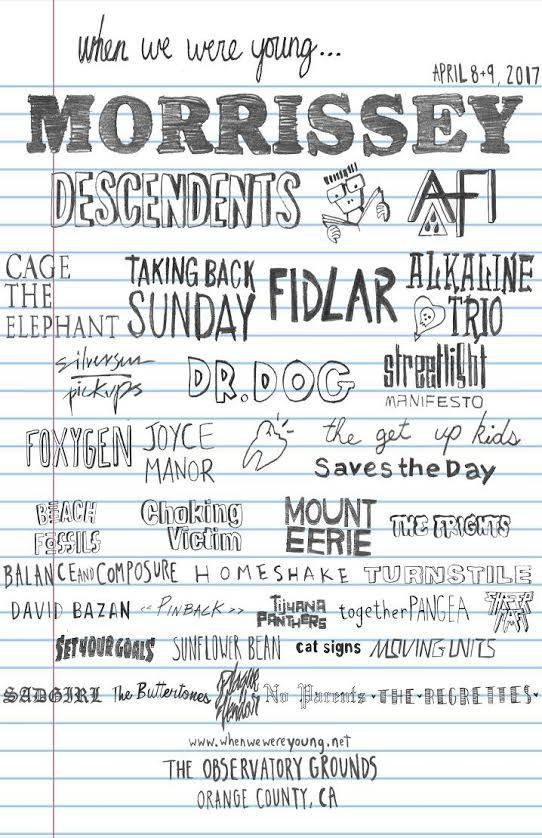 Photo by: When We Were Young

Have we reached peak emo nostalgia yet? When We Were Young festival is yet another example of emo’s renaissance. Just picture all the emo moms and dads swaying idly for bands like Alkaline Trio, the Get Up Kids, Pinback, AFI and Saves the Day, recounting bygone days when their skinny jeans fit and moshing sounded like a good idea. The festival mixes in some "modern emo," this year recruiting Joyce Manor, Foxygen and Beach Fossils.

Mohawks are forever trending at Punk Rock Bowling. The two-city festival makes no qualms about its punk exclusivity. You won’t find any coy indie bands or punk-masquerading-as-emo acts to confuse matters — just punk, hardcore punk and whatever you’d call Fidlar. And yes, there is actually bowling. Major bonus points for the pool and water slide, a genius idea for other festivals basting in summer heat. In 2016, festival promoters expanded to Asbury Park to glowing reviews and encouraging economic success. The proof is in the pudding — they’ll be back for another go-round this summer, as festival promoters hope to fortify a bi-coastal presence for years to come.

Rock in Rio moves to the site of 2016's Olympic Park in Rio de Janeiro, forging a new era for the iconic international festival circuit staple. Moving around is hardly a new concept for Rock in Rio, which has expanded its reach to a few lucky cities on various continents. They’ve tested their brand in places such as Las Vegas, Madrid and Lisbon. Unfortunately the Vegas edition is pretty much done , but the original is a South American force. Icons like Billy Idol, Bon Jovi and Red Hot Chili Peppers figure into a vast lineup. What separates Rock in Rio is the constellation of up-and-coming and veteran Brazilian tropicalia and more trad rock acts.

For better or worse, your favorite punk bands that used to play garages and dive bars are now playing cruise ships. Just own it and give into the glory of the open sea and the idea that said favorite bands are trapped with nothing to do but talk to you! Bands like Good Charlotte, Simple Plan, The Starting Line and thousands of fans will depart from New Orleans to Cozumel, Mexico, surely enjoying the journey more than the destination. The ship is equipped with multiple stages and everything you need to balance head-banging and relaxation.

The Hard Rock Hotel now has a hard rock festival after moving from its previous Santa Ana, California setting. In Las Vegas, the pomp and circumstance (and degenerate debauchery) of hard rock makes more sense than almost anywhere else. Everywhere you look, unironic Guy Fieri-looking guys stroll the Strip, looking for some amalgamation of sex, drugs and rock n’ roll. Guy, meet Psycho Las Vegas, the complete package of said Holy Trinity. Noisey was on hand for the first installment last year, noting as much: “...there was something delightfully cheesy about the Hard Rock trying to lure patrons to its Affliction store and in-house tattoo parlor and proudly displaying an outfit that Sully Erna from Godsmack wore on stage in its lobby.” Factor in the festival's poolside stage, the hotel's gorgeous house venues and casino, and the fact that most of the festival's attendees 9and bands!) stay at the Hard Rock itself, and you've got one of the biggest ragers Vegas sees all summer.

Your idea of Sweden is probably wrong. Swedes aren’t all twee, Barbie-looking, folk-rock purveying and ABBA-obsessed. It’s the opposite: Sweden has a sweet tooth for death metal. The seemingly cheery Scandinavian country is a longtime haven for rock bands with darker, louder tastes. I didn’t realize this until I accidentally stumbled into this festival a decade ago, ditching the facade of Sweden’s smorgasbords in favor of deafening screams, exclusively black attire and peculiarly placed tattoos. Sweden Rock Festival, now under the Live Nation umbrella, remains amongst the European rock festival hegemony, made clear by its sprawling 2017 lineup that includes powerhouses like Aerosmith, Primus, Scorpions, and more.

The first, second and third thing to know about Rock al Parque is this: It’s free! The fourth thing to know: no booze sold here, sorry. But whatever, imagine 400,000 people jumping in unison as dusk dresses Bogotá’s Simon Bolivar Park. Promoters have opened their arms to all walks of musical life in recent years, but rock is deeply embedded in the festival’s roots. Ska, punk, hardcore and metal reign supreme, but one of the festival’s concerns is to give the masses a taste of South America’s most innovative young bands. It’s also true that there’s a growing intercontinental influence over the past decade, which is very much a good thing. Bogotá is no longer a stop along the way for bands—it’s a destination for the world’s most ambitious traveling bands at the top of their game.

Meet the best rock festival you’ve never heard of. Rock am Ring is Europe’s most rock-focused festival, celebrating rock’s myriad subgenres from today and yesterday. Acts like Liam Gallagher, Sum 41, System of a Down and Rammstein represent the industry’s treasured, irony-free days of the ‘90s. It’s the perfect festival for European travelers thirsty for nostalgia and also curious for what’s next. The kicker: scores of up-and-coming German bands fighting for international consideration are vital to this festival’s DNA. And don't sweat the Eurorail pass, RVs are welcome here.

Chicago Open Air Festival debuted in 2016 to deafening praise. Industry heavyweights gave the fest instant, unshakeable credibility: Disturbed, Korn, Slipknot, Marilyn Manson brought stadium-caliber marquee names to fill Toyota Park, while the fringe-metal acts earned their stripes. It’s refreshing to see a festival so comfortable in its own skin, knowing what its audience likes and pouring on the product. This year’s lineup touts Ozzy Osborne, KISS, Slayer and Megadeath—basically a one-stop shop for metalheads in need of a summer break.

Festival junkies, put this on your bucket list if you haven’t already. Nestled at the Naeba Ski Reosrt amongst epic mountain-scapes that stretch seemingly forever, Fuji blends the wonders of nature and ambitious, experimental music, with cutting-edge rock chief among the legions of musical acts. A gondola called Dragondola transports festival-goers up to a netherworld of music and playthings. You arrive and you think, Heaven can’t be far from here. But this is real life for some lucky wristband-wearers. Be sure to come early on Thursday for the free opening party featuring traditional Japanese folk dance and a fireworks festival.

Since 2005, Riot Fest has been on a mission to bring punk music (and its many subgenres) out of dank basements and dirty clubs and into a friendlier festival setting. Over the years, Riot Fest has brought in indie favorites, established and emerging punk and metal bands, and legacy acts not usually found on the festival circuit. They've also begun incorporating more hip-hop into the lineup. In addition to supporting legends like Patti Smith, Blondie, Motörhead, Elvis Costello, and Iggy Pop, Riot Fest has slowly gained a reputation for securing tough headliners like Morrissey. They've also become pros at orchestrating memorable reunions to rival Coachella like The Misfits in 2016 and The Replacements in 2013. One of the festival's other major strengths is tapping into the previously untouched cult of late 90s and early 2000s emo. Every notable emo band from Drive Like Jehu to The Ataris to Brand New has graced these stages.

As one of the biggest metal festivals in Europe and the first of its kind in France, Hellfest means business. Since 2006, Hellfest has unleashed multiple genres of metal across its six stages, from black metal to death metal to doom metal to hardcore punk, to stoner rock, giving it the cred it needs to attract the biggest and best names every year, as well as over 150,000 hungry-to-headbang attendees. Bands and artists who have traveled to France's wine country for this heshers' heaven include all the greats: Iron Maiden, Black Sabbath, Deep Purple, ZZ Top, Motörhead and KISS, as well as that of Slayer, Megadeth, Sepultura, Cannibal Corpse, Anthrax. Indeed, one look at all its past headliners feels like the juiciest lineup porn any self-respecting metalhead will ever experience. But that's not to say the next generation's torchbearers are left unplugged: Gojira, Entombed, Amon Amarth, Cult of Luna, and hundreds more have also made a name for themselves at Hellfest. Apart from the music, there's also a skate park, a tattoo salon, an "Extreme Market" (aka vendors' area), the "Dark Forest," and many other black-tinged attractions.

Roadburn grew out of the Roadburn music blog website founded by Jurgen van den Brand and Walter Hoeijmakers, so it should come as no surprise that the fest's annual lineups boast a who's who of up-and-coming metal and experimental rock talent. One glance at this intimate fest's (under 5,000 attend) past lineups will turn up dozens of artists who have been on your "to-listen" list, as well as ones you thought only you knew about. Of course, there are also always tantalizing headliners on offer as well, such as Neurosis, Pentagram, and Converge in 2016, and Coven, Bongzilla, Amenra, and Baroness in 2017.

Though it was just announced, Glenn Danzig – immortal pipes of The Misfits, Danzig, and Samhain – has a new brainchild that everyone is talking about: the Blackest of the Black Festival. After a decade-plus of headlining his on-again, off-again Blackest of the Black touring fest, Danzig is finally putting down roots for his own destination festival. The headliners on tap are Danzig (of course), Suicidal Tendencies, Ministry, Atreyu, Corrosion of Conformity, Discharge, and many more. So why all the additional buzz? Danzig is unveiling what might be the first immersive metal festival, complete with a castle, a bondage stage, roaming demons, a "blood bath," a sacrifice altar, padded cells, and much more. There will also be rides, games of chance, and a "comic con" area. Danzig said in a statement: "Get ready for sensory overload from films to comics to Castle Danzig. This is going to be the real Blackest of the Black."