Comedy Exploded in the Music Festival Scene in 2017. Here’s Why.

Laughter is one of the greatest, simplest and most under-acknowledged pleasures that music festivals offer their patrons, especially in these fractured times. In an environment where silliness is encouraged – if not required – comedy is becoming more of a fixture than a novelty. It is not only an antidote to repetitive festival lineups, but also to the daily stresses that many people endure.

Lately, the rise of comedy in the festival industry has been meteoric. Events such as L.A.’s FYF, Tennessee's Bonnaroo, Seattle’s Bumbershoot, San Francisco’s Outside Lands and Orange County’s now-defunct Beach Goth have long been incorporating comedians into their festivals as either main acts in their own comedy club-esque tents where attendees can have a sit, a drink and a chuckle, or as MCs between musical acts. Over the last few years, however, it has become more common to see them peppered throughout a lineup in both mainstream and boutique festivals alike.

So why the sudden uptick? While comedy and festivals are great ways to be entertained in various states of intoxication, they have also become a potent remedy for the deep, cultural malaise that is befouling our society.

“When you live in times that are as interesting as they are now, comedy has the ability to shine a light on things, bring forth conversations that might otherwise be uncomfortable and help people to both process and understand a lot of the world around us,” says Steve Raizes, Senior Vice President, Head of Operations and Strategy for Viacom Music & Entertainment Consumer Products.

Many festival producers are realizing that the addition of comedy to their lineups has the potential to enhance both the experience and ticket sales. Las Vegas’s Life is Beautiful Festival , for example, now offers comedy, and Austin’s sprawling South By Southwest (SXSW) keeps expanding its comedic pedigree -- with more sophisticated programming every year -- adding to its already-long, roster of renowned entertainment and technology giants.

Scout Durwood performing in the Comedy House at Life Is Beautiful. Photo by: Film Magic

This merger means artists who have long blended music and comedy – such as Reggie Watts, who has performed at Great North in Maine and Comedy Central’s Colossal Clusterfest (produced by Superfly) in San Francisco, and Lil Dicky, whose unique brand of comedic rap has gone viral – now have the proper avenue to serve up their unique style of entertainment. This seamless integration of comedy into a musical act is the embodiment of how fluidly music and comedy can converge into its own festival genre. In the music festival concept’s 50 years of existence, this new era is a cultural milestone in its evolution.

It’s not all about music, though. There are countless festivals devoted entirely to comedy—such as Montreal’s Just For Laughs and Tenacious D.’s Festival Supreme—but most take place across various venues resulting in attendees purchasing separate tickets for each event.

Raizes, who is part of the team that created and launched Colossal Clusterfest in 2017, wanted to shift to the multiple-stage, single-pass model that the majority of music festivals utilize. And, also like music festivals, he believes that comedy serves a necessary function in the way society manages the constant deluge of information—and misinformation—in regards to politics, tragedy, and human nature.

“We certainly drew inspiration from the experiential side and overall community vibe of festivals such as Bonnaroo and Outside Lands,” says Raizes about the two festivals also produced by Superfly. “Clusterfest is, literally, the only multi-day, multi-stage, single-ticket comedy festival that gets you comedy, podcasts, music and immersive experiences.”

For three days in early June of 2017, San Francisco was invaded by rock stars of comedy which included Jerry Seinfeld, Sarah Silverman, T.J. Miller, Bill Burr, Hannibal Buress, and many more. You could shotgun a beer at Paddy’s Pub from It’s Always Sunny in Philadelphia, jump in a South Park “Memberberry” ball pit soundtracked by Toto’s “Africa,” or snack on cereal in a replica of Jerry’s apartment from Seinfeld. Borrowing the same tenets of immersion that festivals usually display in the form of colossal art installations, Clusterfest will undoubtedly be the first of many comedy festivals to be organized in this fashion.

The replica of Jerry's apartment from Seinfeld at Colossal Clusterfest. Photo by: Adrian Spinelli

Another new paradigm in the union of music and comedy (and comic books) is ID10T Music Festival and Comic Conival. Hosted and co-created by Chris Hardwick of “The Nerdist” podcast, its debut was in late June, 2017 in California’s Silicon Valley and featured various genres of music, comedy, panels, cosplay, comics, video games, and technology. Alongside diverse musical acts such as Weezer and Zeds Ded, the lineup also showcased comics such as Demetri Martin, Nikki Glaser, Michael Che and comedy-folk duo Garfunkel & Oates who all performed in their designated 800-person tent.

According to ID10T Fest co-producer Lee Loughridge, the organizers were nervous that the venue was too big and that comics would be performing for small crowds in a giant tent. That was not the case. The tent reached capacity for almost every act and there was an ever-present line out the door. It seems as though more and more people are looking for a laugh these days. 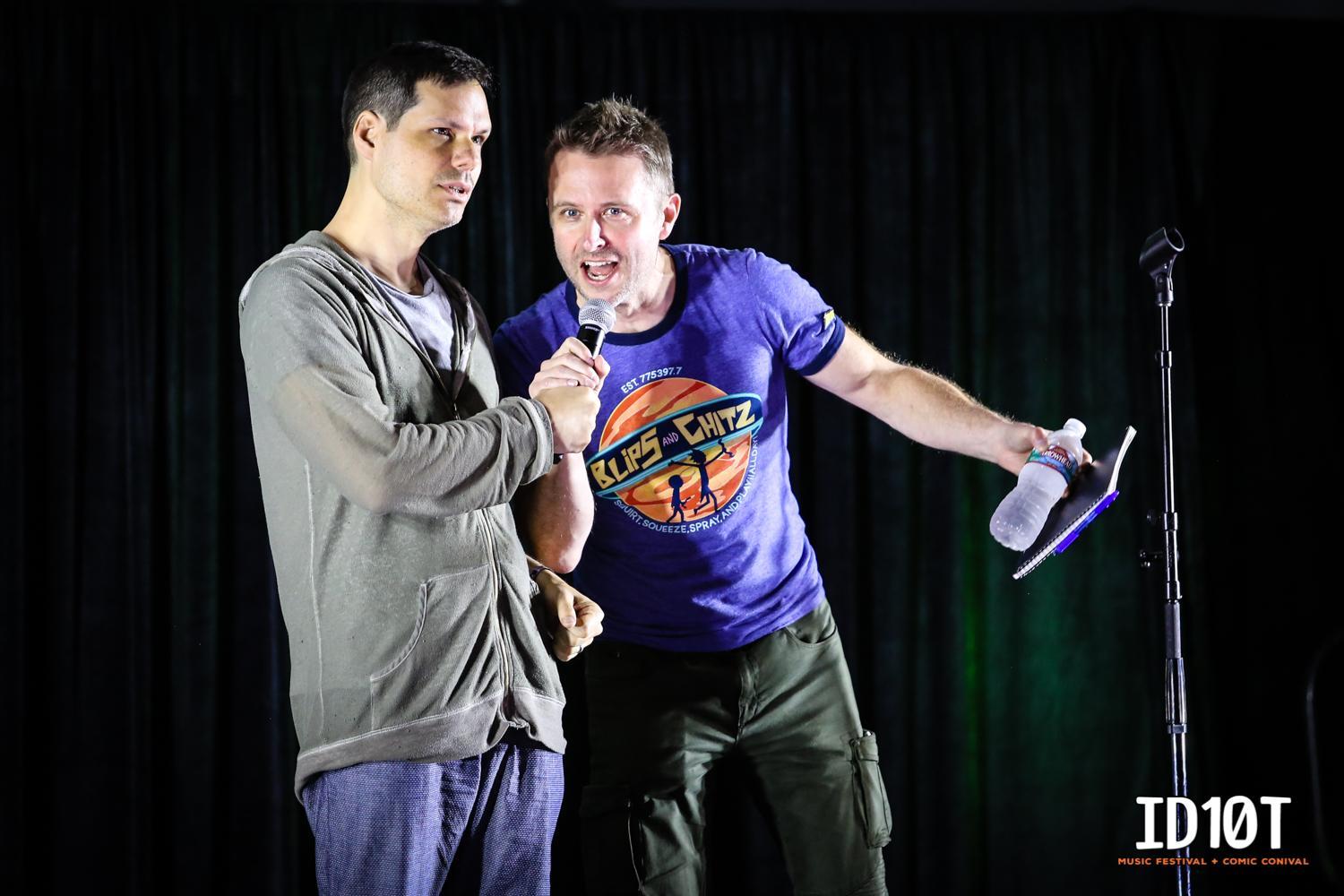 “I was so excited about how it came out,” says Loughridge. “For us, the challenge was ‘can we pull this off? Are people gonna care? Is this too much?’ but it really came together. I was impressed with the amount of people that came — I mean, there were no incidents at the event. Nobody got hurt, there were no fights, everyone there was this really great community of people that were just having fun and enjoying themselves. We were ecstatic. It was the best time.” 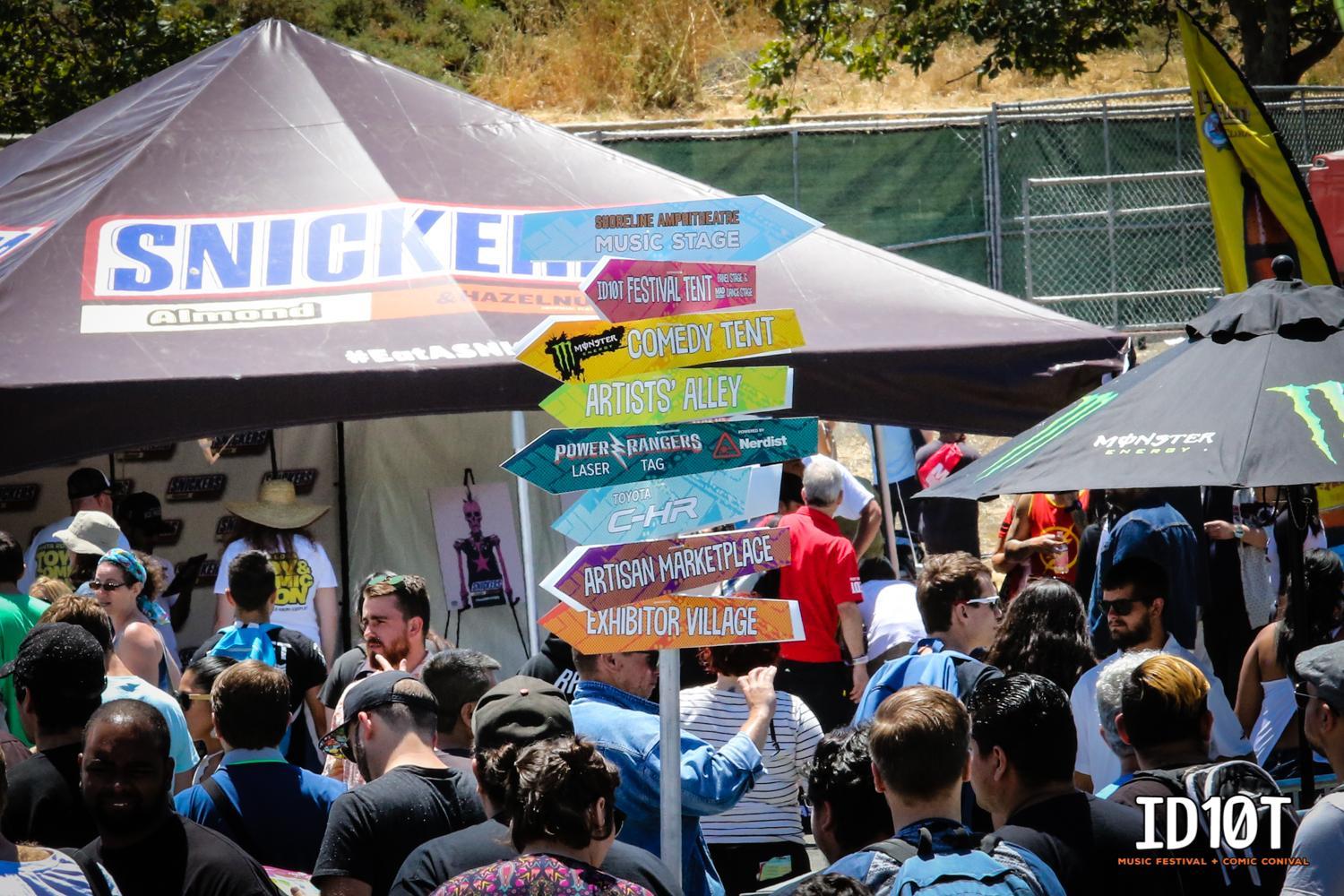 For the bliss junkies who crave a side of hippie with their comedy, boutique festivals such as Dirtybird Campout, which takes place in Northern California every fall, are incorporating comedy into their normal programming. Alongside all the house and techno you can stomach, the festival — produced by the titular record label — offers games, summer camp activities, yoga, workshops and yes, comedy. 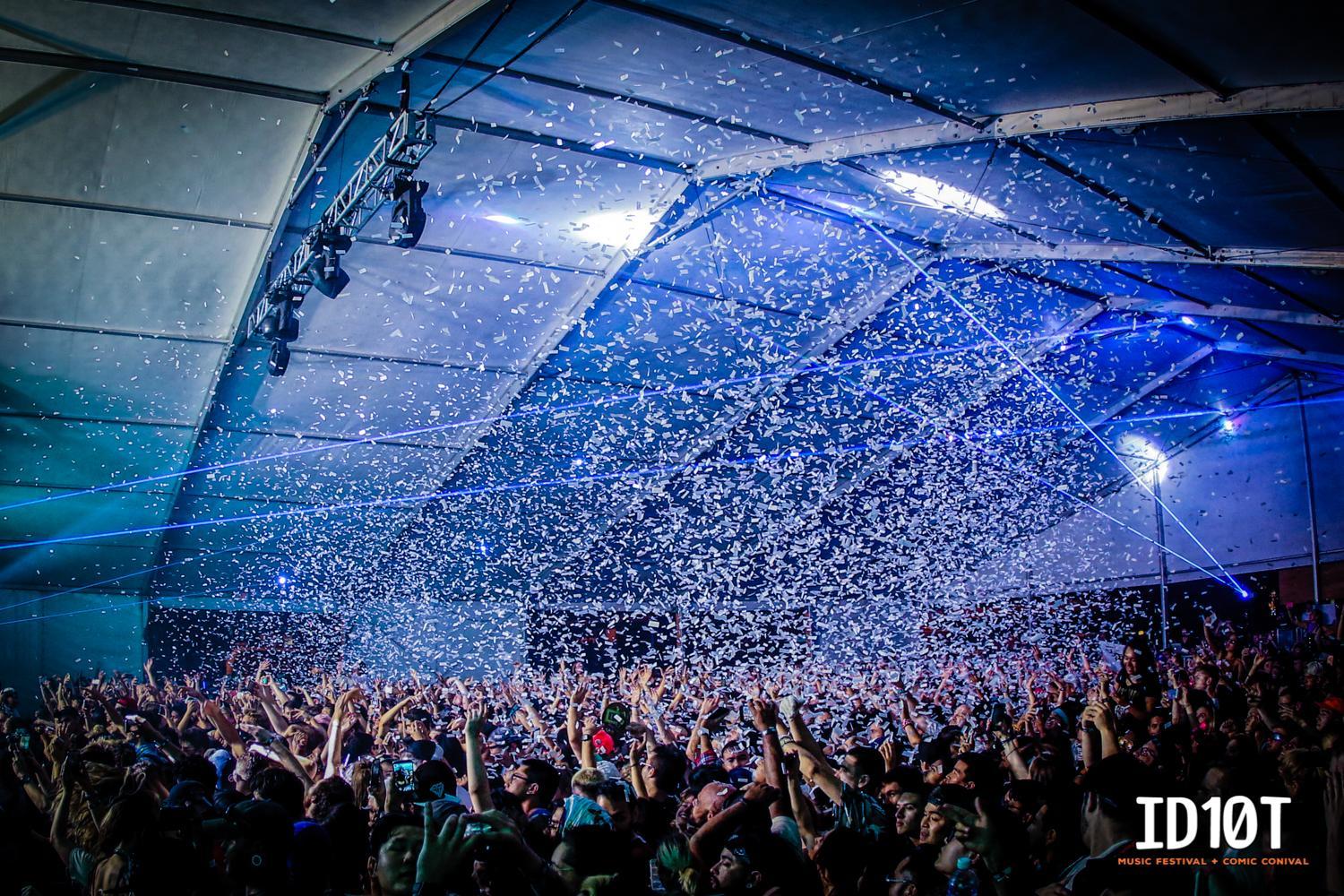 “The best example that I have experienced of music and comedy blending was the Great Bingo Revival that went down at Dirtybird Campout,” says Dan Torres, a festival-devotee, comedy connoisseur and DJ who goes by Wet Hand Dan. “The MC was in a maroon suit, dark glasses and a gold handlebar mustache. His voice could melt the batter off a corn dog — I was losing my mind laughing and screaming. It was the best two hours of the festival.”

Hopping between exercising your legs on the dance floor and working your abdominals during a comedy act is catching on. Austin’s illustrious SXSW has long been a festival mecca for all things entertainment — music, film, television, art, technology — and comedy has been in the mix as well since 2008.

From its humble beginning in 1987 as a one-day event, SXSW has grown into a weeklong conglomeration of live music, film premieres, interactive media, immersive installations, panels, conferences, and after parties that span across the hip city of Austin. Notable musicians such as Kanye West, Metallica and Iggy Pop have graced the stages and acclaimed filmmakers such as Ryan Gosling and Alejandro Jodorowsky have been keynote speakers along with technological wizard and SpaceX CEO Elon Musk.

Talent and minds from every corner of life are both showcased and in attendance at SXSW. Initially, there was only one day dedicated to comedy but was extended to a full week in 2017. As the comedy program evolved over the years, SXSW's early comedy lineups now read like a murderer's row of talent, rife with current household names like Tig Notaro, ID10TFest's Chris Hardwick, and Aziz Ansari -- many of whom had career-changing appearances at the festival. A show they did a few years ago recently garnered press because it was where Judd Apatow first met Chris Gethard, Pete Holmes, and Kumail Najiani, before going on to work with all three. The festival's comedic caliber gained even more exposure after shooting specials for Showtime in 2015 and 2016.

The SXSW comedy lineup in 2017 featured a mixture of stand-up, improv, sketch, live podcasts, and panels with acts like Nick Kroll, Janeane Garofalo, Bob Odenkirk (one of his first improv appearances in 20 years), Wanda Sykes and Doug Stanhope, as well as a live recording of the “Comedy Bang! Bang!” podcast. Taking place at legendary Austin comedy theatres such as The Hideout and Esther’s Follies, SXSW 2018 will present all-day programming from March 9-13 and nightly shows March 14-17. That’s more than enough comedy to keep your cheeks sore and your abs tight.

The rise in popularity of stand-up comedy within pop culture plays a large role in its growth within the festival community. Though the art of stand-up has existed for decades, HBO paved the way for making it more accessible with their famous comedy specials. Those who don’t want to (or can’t) attend comedy shows, can laugh in their living rooms without buying a ticket or becoming the victim of a comic’s (sometimes vicious) crowd-work.

Now, because of the pervasiveness of streaming culture — Netflix, Amazon, Hulu, YouTube, podcasts, et al — and social media, comedians are getting more traction than ever and are forming their own community of cult-like followers.

The aforementioned Life is Beautiful is among the music festivals who are riding the comedy wave. Occurring every September in downtown Las Vegas, the massive festival recently made comedy its own attraction by creating a venue that mimics the intimacy of a well-established comedy club. This provides festival-goers with a respite from the hectic vibes of the festival and also gives attendees a chance to switch gears from stimulating the senses to stimulating the mind.

Jozalyn Sharp performing in the Comedy House at Life Is Beautiful. Photo by: Film Magic

Ryan Doherty, Chief Experience Officer of Life is Beautiful, says that featuring comedy at festivals is “a natural fit. Comedians—especially with the political [and] cultural tenor of the country right now—are truth tellers,” he adds. “It’s important seeing people not go to CNN or FOX; they are watching Seth Meyers and Stephen Colbert and Trevor Noah and that’s how they’re getting their news—in a comedic way.”

In addition to stand-up comedy’s rise in popularity, the slipshod actions of America’s 45th president have contributed to comedy’s omnipresence in the festival world — not just as more source material for comics, but as a way to cope with living in a society so full of ignorance, anger and violence. One of humanity’s most instinctive, and perhaps most endearing, defense mechanisms is to just laugh it off. It’s a hell of a lot more fun than sitting around and crying about it.

“When times are dark, humans need comedy just for that release of all the stresses of the world,” Torres tells me. “Music festivals have provided that escape on a large scale and that is why it is so refreshing to find both worlds colliding. Comedy is a very effective way to face our fears and insecurities head-on in a much different way than music provides, yet both feed the soul.”