Vendors
Photo By: Get Tiny Photography

Last week in Central Oregon, a dozen celebrated international music and art festivals congregated on the majestic Big Summit Prairie for a week in order to take in the total solar eclipse as one tribe. This event brought together the finest in progressive festival culture for a transformative week focused on community, education, live-art installations, workshops, and prodigious musical programming.

Boasting seven main music stages, along with countless smaller, quirkier venues dotting the sprawling prairie landscape, Global Eclipse Gathering unleashed an astonishing assortment of musical offerings that went around the clock. No human being could take in even a fifth of what was available, but nonetheless, we did our damndest. Here's merely a smattering of the highest art we heard at Global Eclipse Gathering 2017. 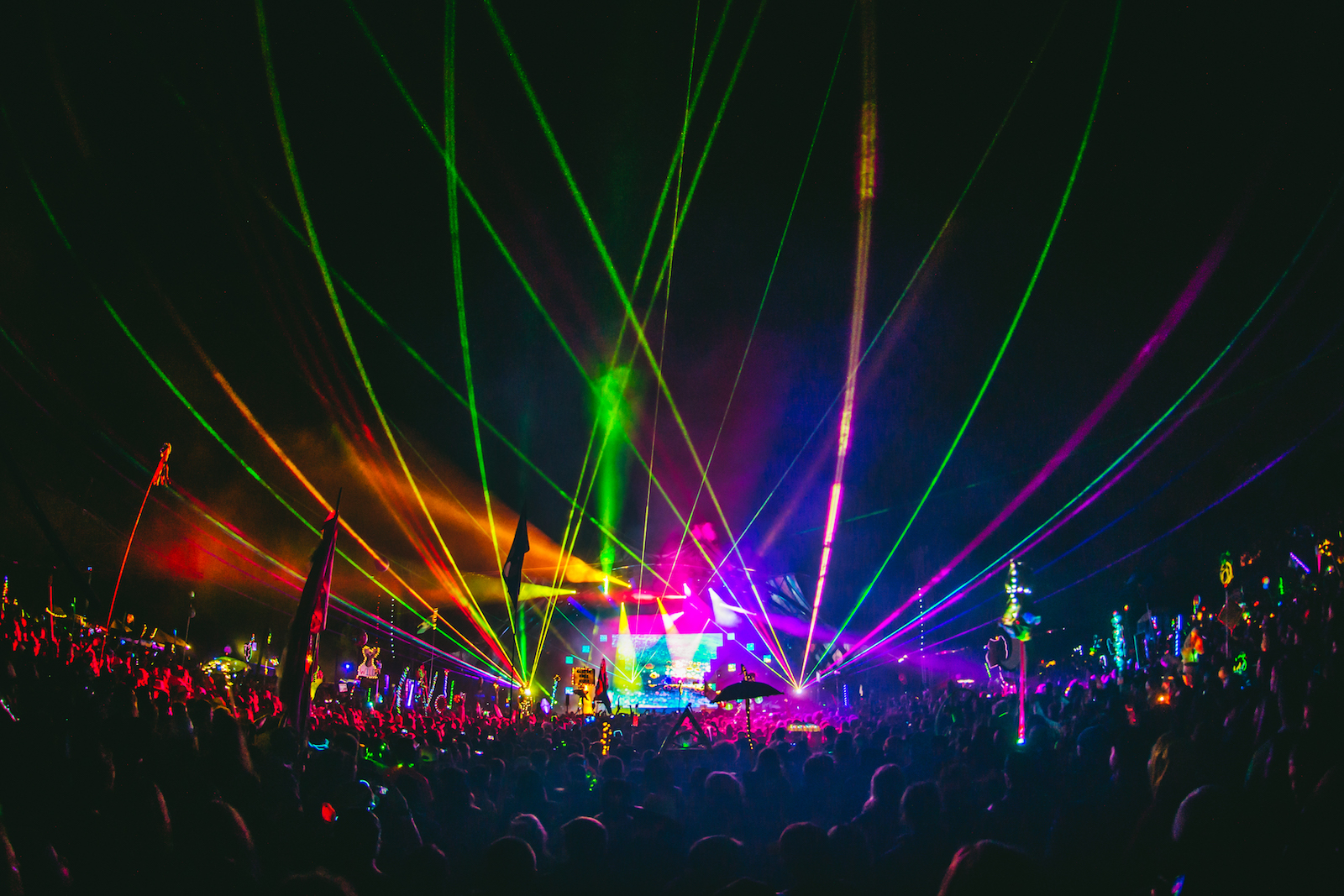 Combining all of the elements of festival culture and its supernatural soundtracks, the Eclipse Stage had a gigantic architectural setup in order to host the largest assembled contingents of ravers and revelers, and the bold-font musical performances.

"The Eclipse Stage was a combination of the music we grew up with, and people within our community that are now legit rock stars," said Symbiosis Gathering producer Kevin Kochen about the event's namesake stage. "The Symbiosis partners have seen a lot of jam shows...we've each seen hundreds. We'd traveled back and forth around the country seeing this DJ, band, and that one; Oregon Eclipse seemed the perfect time to bring our pasts into our present"

The Eclipse Stage's enormous Trinity soundsystem was engineered and powered by the mighty PK Sound, and everybody from headliners Bassnectar and (Billy Nershi-less) String Cheese Incident, to the likes of Australia's kaleidoscopic Opiuo, the thunderous G Jones, UK trap warlord Troyboi, electro-rock stars Glitch Mob, Nordic empress and virtuoso violinist HÄANA, and Bedouin mavens Beats Antique sounded positively magnifico. The Trinity rig at Eclipse was the creme de la creme in sonic might and tonal clarity, the finest to have ever graced this writer's ears.

Soaring above the gargantuan Eclipse Stage were two diametrically opposite, yet equally essential entities of the West Coast bass music spectrum. Early Monday, beginning just before four in the morning, Oakland, California's sinister Dimond Saints mined the heart of darkness like only they can, tunneling even further down the rabbit hole with sparse, sonorous low-end, 808 mindstates and ethereal vocals from Yaarrohs.

Later that morning, Random Rab took center of this grandiose stage with purpose and grace, and delivered The Penumbra, a collaborative performance to appropriately beckon the onset of the solar eclipse. The hallowed electro-folk troubadour enlisted a cadre that included Cello Joe, Dave Hoover (on harp), longtime collaborator Rigzin, visual artist Anthony "Flowers" Ward, and celestial dancers Sofia Thom and Elana Meta, among others. Rab ushered in the main event with atypical wizardry, in a driving, aggressive song selection including material composed specifically for this momentous occasion.

Symbiosis is known for squeezing surprises and gleaning gems from the smallest spaces in serendipity, and Eclipse Gathering would be no different. Whether it be the idiosyncratic scene at the Symbioat Saloon, a stationary pirate ship that hosted heated sets from bands like Sepiatonic and High Steppin' Society, or a floating bar such as the Mazar where one could find The Librarian and Mandai throwing down as the lake hosted the rage. A visit to the Yoga Shala late one evening found electro-reggae phenom Isaac Chambers teamed up with Jumpsuit Records teammates Ryan Herr and TROPO for a hybrid ecstatic dancehall powered by dubbed-out live band.

The Earth Stage was where we spent a disproportionate chunk of our music-chasing time, as its wide-angle, globalized lineup card, incredible Funktion-One system, mind-boggling structures and projection-mapped visuals made for the juiciest environs. So many sets that took place on this stage were beyond exemplary, including, but not limited to: The Human Experience, Australia's DJ DAKINI and Grouch in Dub, local heroes Emancipator at sunrise, British Columbia's AtyYA, Goopsteppa at sunrise, and Portland newcomer Hakuu, who made his presence felt after a regal Random Rab, on the festival's final morning.

However, one particular performance shone brightest among the Earth Stage's magnificent programming. The humongous shamanic conglomerate Liberation Movement, led by the Resurrector himself Grant Chambers, provided a veritable séance in deep, dubby beat-science, guttural throat singing, pulverizing sonics, and messages of Grandmother, Mother Earth and her Medicine. This was a spiritualized journey that burrowed many thousands of leagues beneath the Earth's surface, penetrating the consciousness of all whom had assembled.

Silk Road was the spot for world music vibes nearly around the clock. Just before midnight Saturday, Brooklyn Afrobeat mafia Antibalas delivered on their promise to astound, offering two-plus hours of Fela-inspired funk that provided the most furious dance floor energy to which this writer bore witness. Tuesday morning for sunrise, Ecuador's provocateur of Andes-step Nicola Cruz delivered an astonishing set of torrid grooves and polyamorous polyrhythms. Later that night, seemingly out of nowhere came Brooklyn Gypsies, a rollicking band spilling out Spanish reggae flavors with heaping portions of King Tubby bass powering the dancehall.

The Moon Stage was headquarters for a collection of artists that leaned toward bass music. Portland, Oregon, snow-yardie PRSN was the first to set the bar high as the Moon, on Friday night Bryce Lowell presented his potent blend of dancehall and bass riddims. Later, unassuming bass bombshell The Librarian , who booked much of the Moon talent, commandeered the system and made the tombs rattle proper with a triumph in low-end theory. At Sunset on Sunday, DJ Lorin (aka Bassnectar) made a stealth appearance under the alias West Coast Lo Fi, providing a much-ballyhooed look back to yesteryear for a stunned Moon Stage crowd of random onlookers and a few lucky Bassheads.

Deep Medi Muzik's six-plus hour showcase was the most revered performance at the Moon Stage, hands down. International dubstep aficionados as well as Americans who had written off the genre years ago were in agreement when it came to Mala, Kahn, & Neek; nevermind the insomniac breaux-downs that populate the States, this is how dubstep should sound. Immediately following the solar eclipse, Oakland's an-ten-nae reprised his (now-legendary) 2013 Symbiosis dawn of the Medicine Crunk era, with two hours of meditative jams and sexy, sugary remixes. All of the otherworldly soundscapes heard the Moon Stage were produced through a top-tier system of customized Danley technology, courtesy of Know Audio.

We checked in with Everfest fam Jessica Perlstein, whose portal-tapping artwork was proudly displayed at the Village Witches' Elixir Bar all week long. Our psytrance ambassador had this to say about the blazing rays of the Sun Stage:

"The Sun Stage was the hub of the international psychedelic family which featured top psytrance acts from around the globe. The stage opened Friday with a showcase of local, up-and-coming North American talent. The vibrations were high Saturday night as Avalon and Tristan rocked the house with juicy, full-on grooves. Merkaba blessed us with some deep tribal stomping Sunday afternoon, while nighttime featured world renowned dark-psy acts such as Derango, with Ajja blasting us into the morning for an epic psychedelic eclipse sunrise. The eclipse opened the portal for the remaining days, with Hallucinogen carrying the torch with a classic mind-bending set. Grouch brought that deliciously groovy Aussie sound on Tuesday afternoon, and 1200 Mics closed the stage with a ridiculously fun, silly and classic set to send us off into the abyss with hearts open and souls connected."

After the Sun Stage closed down on Wednesday, the legend Goa Gil embarked on his 24-hour set that drew hordes of remaining revelers to his gala with frenzied, tantric BPMs and warm, inviting vibes. 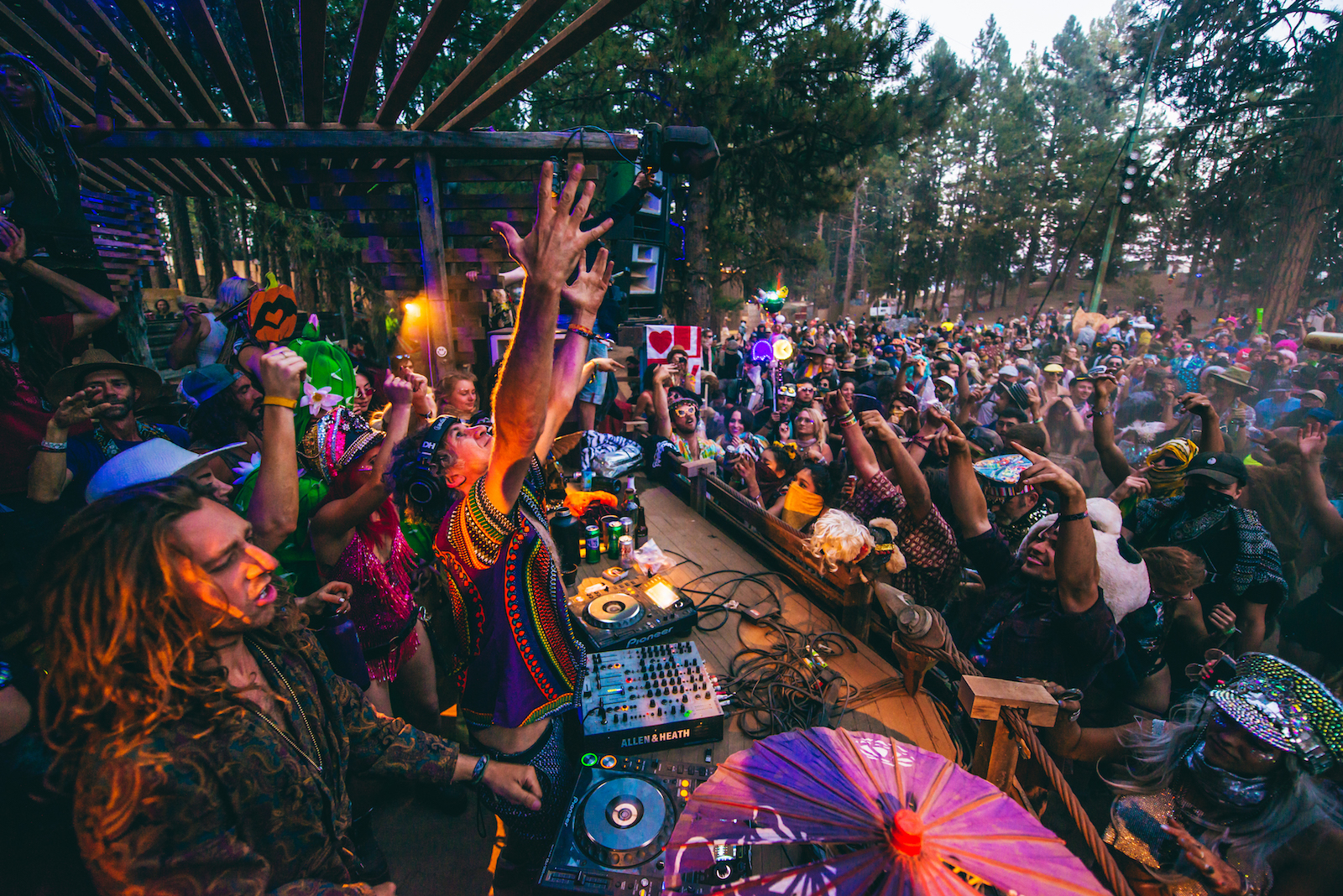 To embark on a most manic Monday – the day of the Eclipse – KMLN tantalized the Sky Stage brimming with house-heads at the stroke of twelve bells, with syncopated world music beats, live instrumentation, and salacious melodies atop furious riddims. The Desert Hearts takeover on Saturday night saw MARBS lead the charge, along with co-conspirators Mikey Lion, Lee Reynolds , and Porkchop taking turns on the decks as their usual modus operandi. On the afternoon of the solar eclipse, Be Svendsen unveiled a terrific set in the blazing prairie sun. A Danish deep house sorcerer, the Tarantino of Tech tore up the spot with nomadic and organic authority. Clad as always in his psychedelic top hat, Svendsen spirited a sunshine daydream that will be long remembered.

The Big Top stage was a circus tent, burlesque club, and steampunk'd freak show under one huge, pointed roof. The stage played gracious host to a variety of vaudeville- and circus-themed performers, including long-running stalwarts Vau de Vire Society and Pyrodanza. Big Top was also Area One for the finest live instrumentation found onsite over the course of the festival week. Nobody felt more at home in these zany environs than the Bayou brigade known as Rebirth Brass Band. The veritable NOLA institution Second Lined their way in and out of Oregon with appropriate verve, a panache followed in lockstep by the lysergic lampoonings of local darlings March Fourth.

Jamtronica pioneers STS9, progressive folk storytellers Elephant Revival, Bay Area psychedelic guitar warrior Steve Kimock and Friends, and South Florida's prodigal sons o' jam The Heavy Pets all delivered standout performances at the Big Top. However, despite an achingly long soundcheck and technical snafus, it would be Karl Denson's Tiny Universe who would run away with the proverbial circus, as the man they call Sexual Chocolate and his krewe de smoove detonated diesel-tronic funk, leaving every beating heart oh-so “Satisfied.”

Thursday night saw Nevada City, California's Brian Hartman unleash a mammoth three-hour tour de force, providing an Earth-strong session to the teeming masses. On Saturday evening, the Dragon Fam Jam brought together two longtime friends from Salt Spring Island, BC, in Leland Riivr and Goopsteppa. The dynamic duo blessed up the tribes with a b2b set for the ages. Tuesday night at midnight, Ladies Night at The NOHM saw the Naughty Princess mesmerize a capacity crowd with her sizzling blend of shanti-trap and glittery bass gymnastics.

Friday night, after genre-spanning, time-traveling sets from three selectas with rapidly rising stars – the liberated Migaloo, birthday boy Brian Hartman, and BC bad boy Leland Riivr – the dub producer du jour Goopsteppa took to the decks of Furtherrr just before dawn. Alex captained a special type of journey, and we took it all in from the cozy, lakeside Ewok village tucked into the trees. To bring up the sun and bring us on home, BELI3VER dropped a tantalizing take on "In Your Eyes," the Peter Gabriel classic reimagined by BANKS. 'Twas the perfect walk-off tune for a moment, and a voyage to remember.